The Bureau of Land Management (BLM) is responsible for 1 in every 10 acres of land in the U.S.

Silt Mesa is a multi-use recreational area located just a few miles north of the small town of Silt in Colorado. This extensive recreation management area is primarily used for horseback riding, hiking, and OHV riding and is overseen by the Bureau of Land Management (BLM), a federal government agency that preserves and protects public lands for recreational purposes. Bureau of Land Management camping near Silt Mesa is scarce, but BLM campgrounds do exist near Dotsero and Gypsum, which are less than 50 miles from Silt Mesa. The site's mountainous location is also relatively close to two of Colorado's most impressive national parks — Black Canyon of the Gunnison National Park and Rocky Mountain National Park.

What to See and Do

The Storm King Trail is a challenging loop trail that's just 13 miles east of Silt off of I-70. This trail commemorates the firefighters who lost their lives in the Storm King Mountain fire. The memorial trail starts off well-marked to the Observation Point, which is a mostly uphill trek that leads to the memorial area. Navigation of the remaining portion of the trail is made simpler by keeping the Observation Point in sight, though hikers should also be equipped with a map. Expect steep, rocky terrain and a significant ascent during the first half of the hike. Several switchbacks add to the difficulty of the trail. At the fork, you can go left, which is a continuation of the trail, or you can go right, which leads up the side of a steep mountain.

The South Canyon Recreation Site provides seasonal access to the Colorado River for anglers and boaters from May through November. Fishermen can hook a variety of fish species, including walleye, smallmouth and largemouth bass, northern pike, crappie, channel catfish, and bluegill, but the Gold Medal waters of the river are best known for huge rainbow and brown trout catches.

Rifle Mountain Park provides the best sport climbing routes near Silt Mesa. The extensive area offers over 450 climbs on limestone walls with slight to serious overhangs. Popular areas such as Wasteland and Winchester Cave feature advanced routes while easier routes are located in the Sno-Cone Cave and Kubrick's areas.

Elk, mule deer, foxes, and coyotes are often seen wandering through the Silt Mesa RMA. Though not as commonly seen, mountain lions have been spotted along with black bears whose sightings in the area have become more frequent. Larger game birds such as pheasants and wild turkeys also inhabit Silt Mesa, and visitors are likely to see Canadian geese, red-tailed hawks, and American kestrels soaring overhead.

While there is no designated picnic area in Silt Mesa, picnicking is permitted on BLM lands. Trash should be cleaned up and packed out.

Horseback Riding and OHV Use

Silt Mesa features a variety of multi-use trails that are available to horseback riders. Some trails are designated for hiking and horseback use only. BLM guidelines for trail use should be followed as the BLM area in Silt Mesa is also open to OHV riding on a separate set of trails. Use caution while sharing the trails that also permit motorized vehicles.

While there is no developed BLM RV camping at the Silt Mesa RMA, a nearby state park is open to RV campers. Rifle Gap State Park has five separate campgrounds that provide electric hookups at some of their sites along with picnic tables, fire rings, restrooms, and a dump station. Organized RV camping is available near town if you prefer less rustic accommodations. Glenwood Springs West/Colorado River KOA Holiday features full hookups, riverfront sites, laundry facilities, a dump station, and on-site activities such as fishing, hiking, and boating.

The nearest place to enjoy Bureau of Land Management free camping is at the Lyons Gulch Campground near Gypsum. This site offers five first-come, first-served campsites with picnic tables, fire pits, and access to a toilet. Accommodations are rustic, and there is no potable water. This campground is situated along the Colorado River and has a boat launch. To find more Bureau of Land Management campgrounds near your location, search "BLM camping near me."

RV Rentals Near Silt Mesa Plan your next adventure

Plan your BLM trip to Silt Mesa with the knowledge that RV camping may be limited to nearby state parks and organized RV parks. The remote location and lack of developed BLM campgrounds permit primitive and dispersed camping on most public lands. Be sure to consider your camping location prior to venturing to the site, and keep a list of other possible campgrounds in the area handy.

Many amenities and services are not available at undeveloped sites. Make sure to load your RV with additional water and food supplies as well as clean bedding. First aid kits, insect repellents, batteries, flashlights, and sunscreen should also be packed. Temperatures in mountainous areas can plummet quickly. Bring warm clothes for changing weather conditions. Before you head out on your trip, check out our blog for all you need to know about BLM camping.

As you enjoy public lands, remember to follow BLM guidelines by removing trash from any area that you explore. Waste should be packed out and properly thrown away. Respect the wildlife, and do not approach or feed bears. If you plan to picnic in the area, keep food in sealed containers to curb wildlife interest. Many trails are open for multi-use purposes. Be courteous to other recreationists, and stay on designated paths and trails. 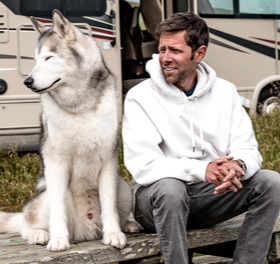 To reach Silt Mesa from Glenwood Springs, get onto I-70W toward Silt. Continue on the highway for 19.5 miles and take Exit 97. Go north. At the roundabout, head west on Highway 6. Turn right at 7th Street. Keep going north until you get to Peach Valley Road/County Road 214. Veer right and continue on Peach Valley Road for 2.1 miles. Turn north on Benedetti Road/County Road 250 and continue for one mile. The entrance to Silt Mesa is to the northeast of Benedetti Road when the road turns west.

Ready to visit Silt Mesa? An RV rental is a great way to experience your destination. Not only will you be close to all the action, but at the end of a long day exploring, you’ll have your RV to return to for the night where you’ll enjoy a full kitchen, bathroom, and nice soft bed. Not sure about renting an RV? Here’s a step-by-step guide to renting an RV with RVshare.

See All BLM Campsites by State