Popular RV Rentals Near Everett, Washington, for Any Budget

The most popular rental camper to be found near Everett, Washington and the surrounding area is the travel trailer, which can hold four to 11 people and costs $115 to $200 per night. Those in search of a rental motor home often turn to the Class C, which holds five to eight people and costs $160 to $375 a night. Class A and Class B motor homes are also available for rent near Everett.

Seattle is just a 40-minute drive south of Everett on Interstate 5, so you’ll probably want to explore this large Washington city on your trip. Volunteer Park, Olympic Sculpture Park, and the Seattle Aquarium are some fascinating stops to make here.

Vancouver is roughly three and a half hours south of Everett on Interstate 5. This Washington city across the Columbia River from Portland is home to attractions like the Fort Vancouver National Historic Site and the Vancouver Waterfront.

Everett was established in 1890 and incorporated in 1893 after the Great Northern Railway came through the area. Sawmills and shipping were the biggest industries here until shipbuilding and plane-building moved in before and after WWII, respectively. Today, more than 110,000 people live in this lovely city located at the mouth of the Snohomish River. Some of these people work in Seattle, but many of them work at the Boeing plant that’s still flourishing today.

One awesome place that showcases this area’s relationship with the airplane industry is the Boeing Future of Flight Aviation Center, which is actually 10 minutes away in nearby Mukilteo. Once you’re finished looking at the exhibits about modern aviation, you can visit the Boeing production site itself. A fabulous classic airplane collection is housed at the nearby Flying Heritage & Combat Armor Museum.

In Everett itself, you should stop by Funko Everett, which is the flagship shop of this hugely popular fandom collectibles store. The Schack Art Gallery features art exhibits, glassblowers, and a gift shop; admission is free. If you want to hit the beach during the summer, you should hop a ferry and head out to Jetty Island for some swimming, hiking, and kiteboarding.

Bellevue – This Washington city close to Seattle is located between Lake Washington and Lake Sammamish. Some great locations to visit in this city 50 minutes south of Everett are Meydenbauer Bay Park, Bellevue Botanical Garden, and the Bellevue Arts Museum.

Tacoma – About an hour and a half south of Everett, you’ll find this Washington city. When you’re in Tacoma, be sure to stop by the Point Defiance Zoo & Aquarium, the Washington State History Museum, and LeMay - America’s Car Museum.

Olympia – Olympia is about two hours southwest of Everett and about an hour from Olympic National Park. Washington’s capital contains fascinating destinations like Tumwater Historical Park, the Olympia Farmer’s Market, and the Hands On Children’s Museum.

Olympic National Park is about three hours west of Everett. This stunning national park on the Olympic Peninsula is home to 60 miles of Pacific coastline, a temperate rainforest, and rugged mountains.

About an hour and a half northeast of Everett is North Cascades National Park, which is close to the U.S.-Canadian border. The jagged Cascades Mountains and their surrounding lakes, valleys, and glaciers provide plenty of awesome opportunities for backcountry camping, hiking, fishing, kayaking, and more.

Mount Rainier National Park is roughly three hours south of Everett, so you won’t want to miss this iconic Washington mountain on your trip. Old-growth forests, glaciers, meadows, valleys, and the summit of Mount Rainier itself await.

Across the Puget Sound and the Kitsap Peninsula is Kitsap Memorial State Park, which is about an hour and 45 minutes west of Everett. This park on the Hood Canal features nearly 1,800 feet of shoreline that are ideal for swimming, fishing, crabbing, clamming, and more.

Fort Flagler State Park is about two hours and 20 minutes west of Everett on Marrowstone Island and Port Townsend Bay. At this state park, you can tour an old U.S. Army fort, hike around the surrounding countryside, and get in the water.

An hour and 25 minutes northwest of Everett and across from Fort Flagler is Fort Casey State Park. This park is nearly 1,000 acres large, so there’s plenty of room for fishing, hiking, swimming, diving, and other fun activities.

Must See Monuments and Landmarks Near Everett, Washington

One of Washington’s must-see landmarks is the Space Needle, which is just 30 minutes south of Everett. When you visit this iconic Seattle structure, you’ll get to see the best sights in the area from its observation tower and eat a tasty meal in its restaurant.

Another lovely landmark close to Everett is Snoqualmie Falls, which is just 50 minutes away. This gorgeous waterfall on the Snoqualmie River is nearly 270 feet tall; you can see it in all its glory from an observation area that has some nice hiking trails.

The Puget Sound is both a group of multiple waterways and islands as well as a region of Washington State. Everett itself is part of the Puget Sound region, so visitors will have plenty of opportunities to visit parks on the Sound, ride ferries to Puget Sound islands, and sample the best that the diverse cultures here have to offer.

One excellent RV campground close to Everett is Lake Pleasant RV Park, which is 20 minutes south in nearby Bothell. Full hookups, laundry facilities, back-in and pull-through sites, and picnic places are available here. If you’re planning to visit Kitsap Memorial State Park, then you may want to consider camping there since you’d have access to the many awesome features and amenities of this gorgeous state park. Another camping possibility is Vasa Park Resort, which is right on Lake Sammamish. This sizable campsite features paved roads, a fabulous beach, and modern laundry and shower facilities.

One of the best RV dump stations in Everett is at the Silver Lake Rest Area, which allows everyone to empty their tanks for free. Another quality option in Everett is Maple Grove RV Resort, which charges a fee for the general use of its dump stations but allows paying campers to dump for free. Nearby Marysville has a great dumping option in the Marysville Planning and Public Works Building, which has a dump station that’s free for all. Another excellent free dump station is at the Southbound Smokey Point Rest Area, which is located about 20 minutes north of Everett in nearby Arlington.

Ferguson Terminal is a high-quality RV storage facility in nearby Seattle. It charges based on your rig’s length, and it is capable of storing campers of all shapes and sizes. Another possibility is Eastside RV and Boat Storage, which is close to Lake Washington and Lake Sammamish. The fenced, gated area here is capable of accommodating RVs of any size; you can even rent electricity for your camper. You might also want to park your RV at Seattle Outside Storage, which is near Salmon Bay. Whether your camper is large or small, this business can store it safely. 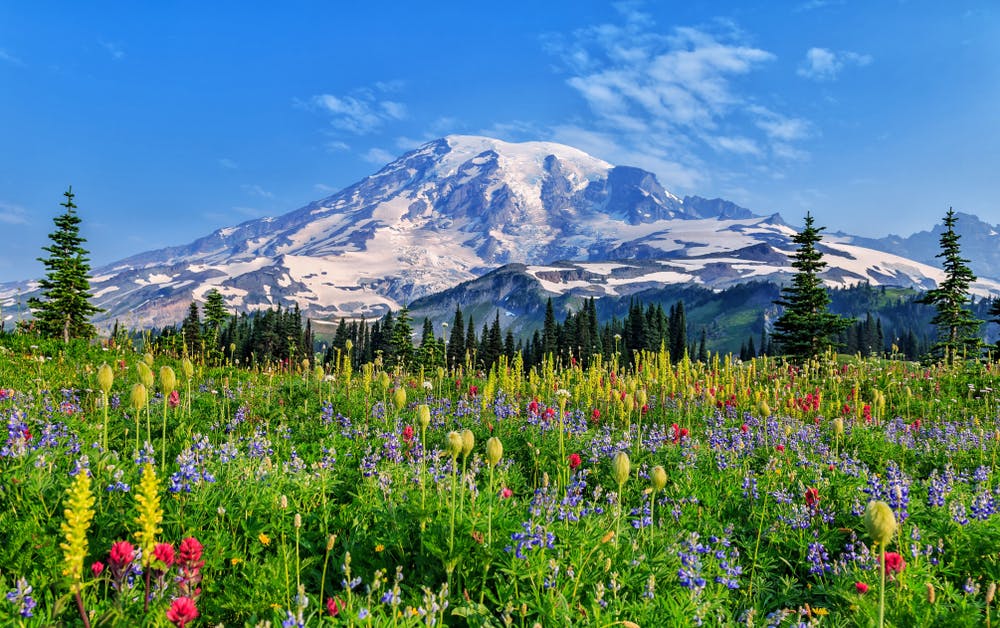 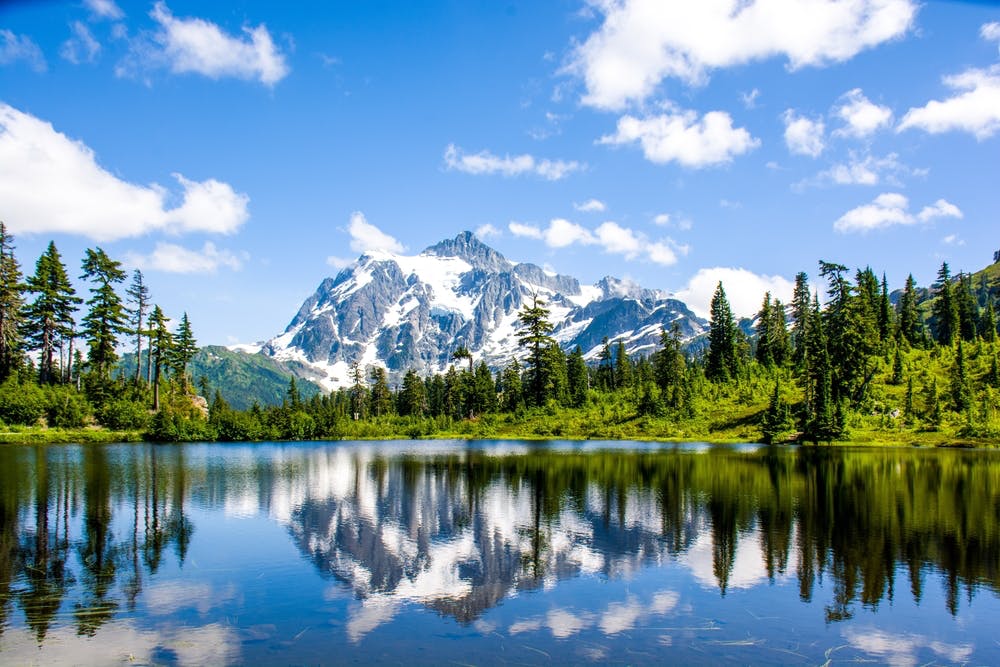 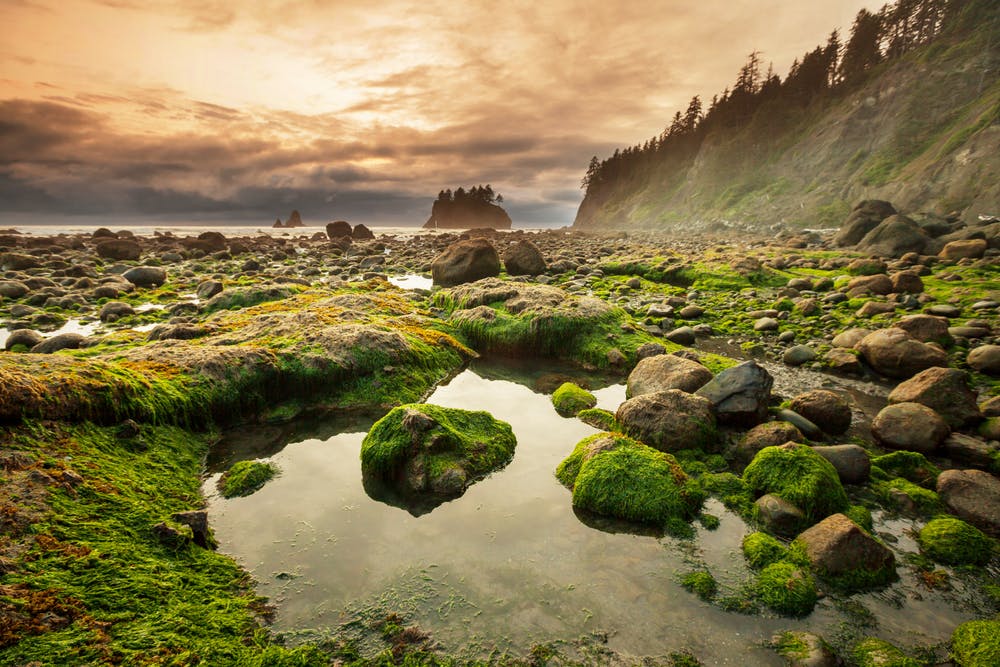 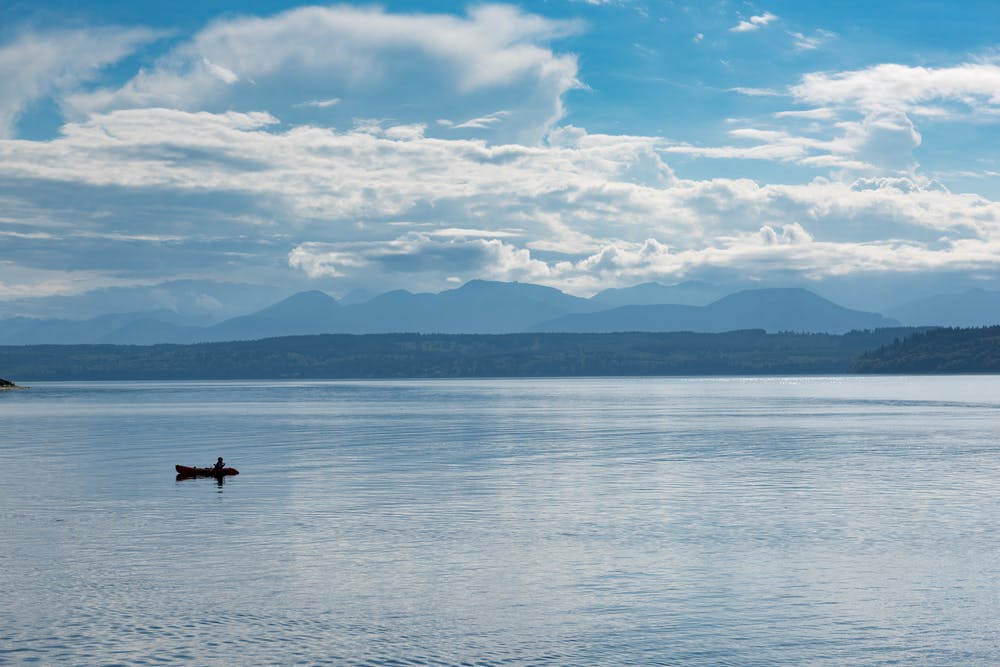 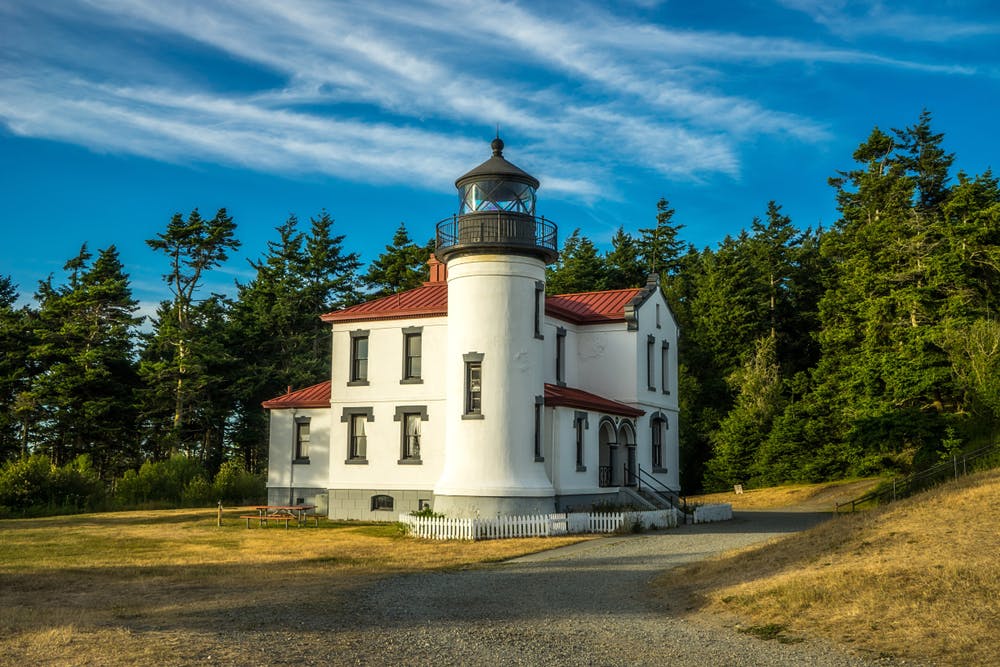 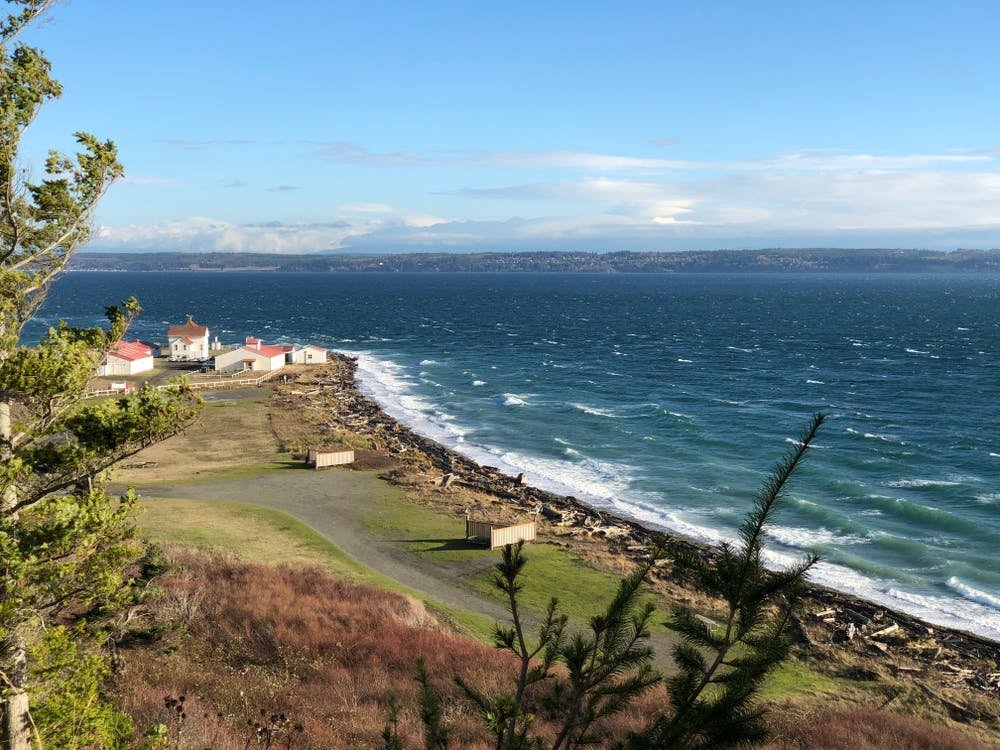 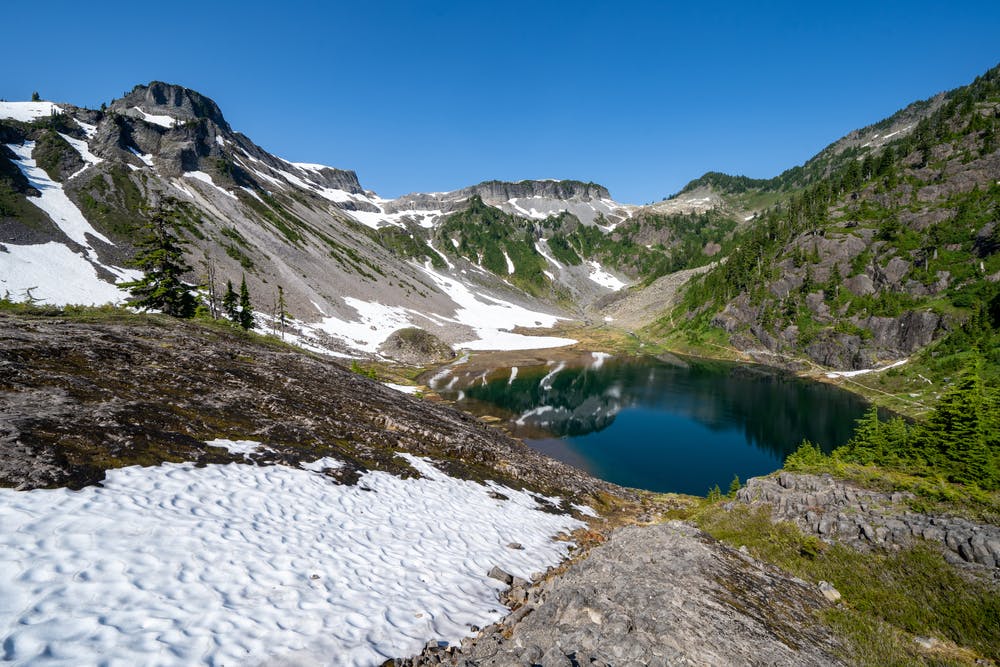 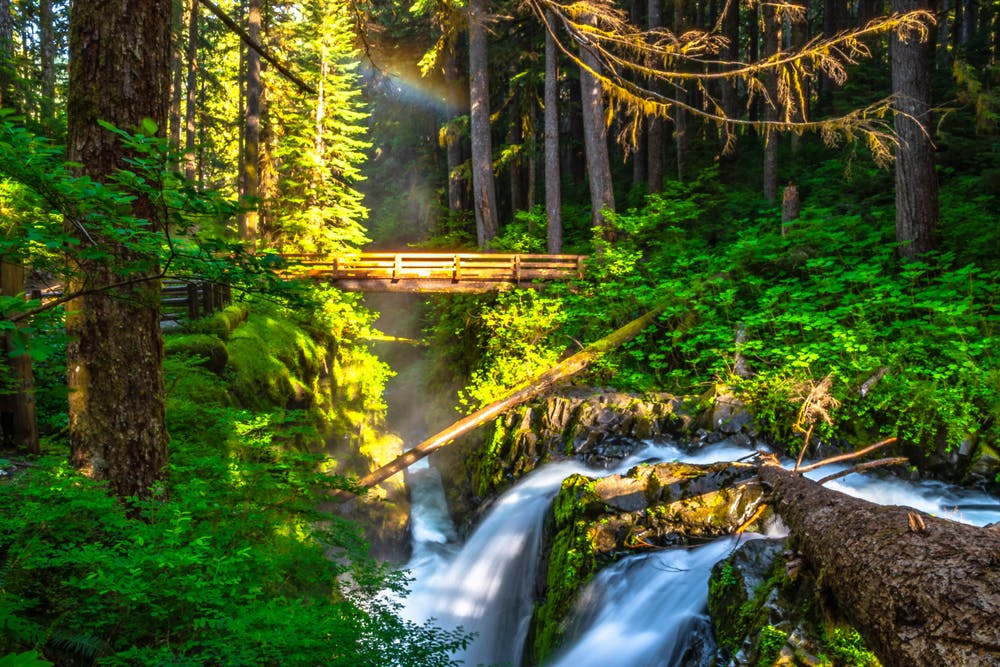 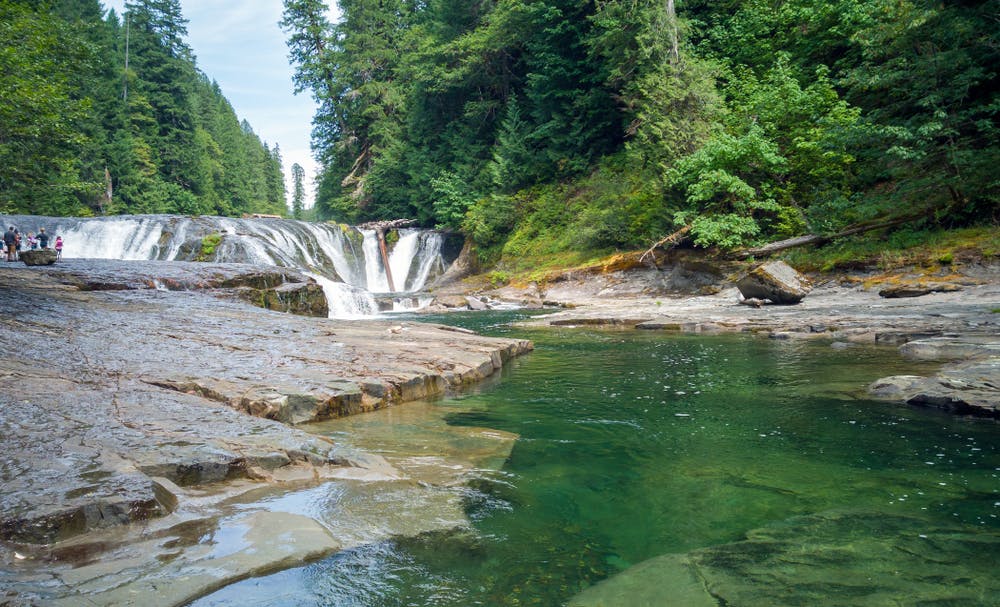 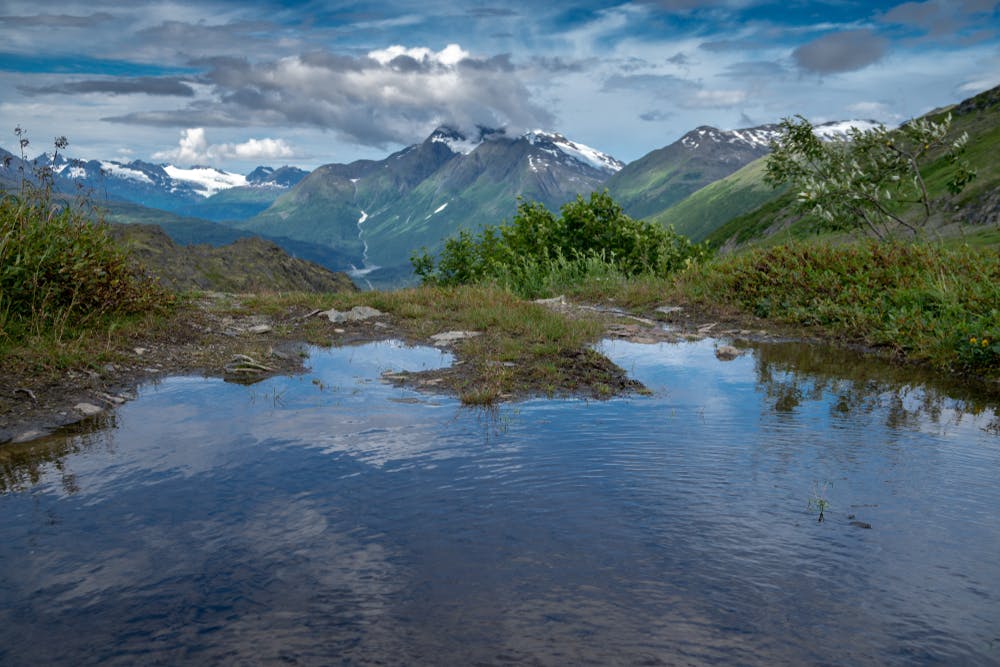 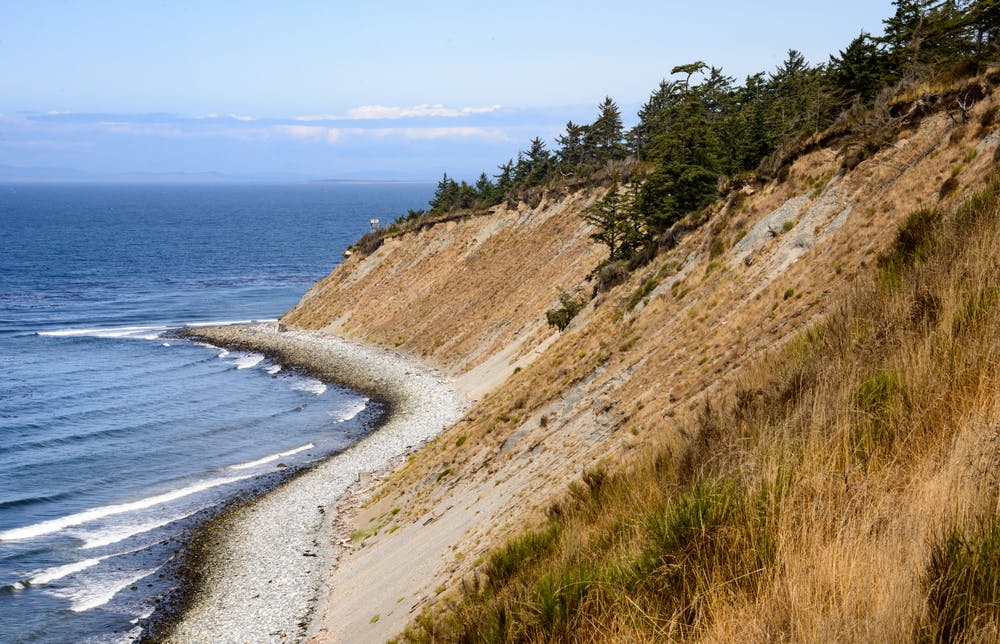 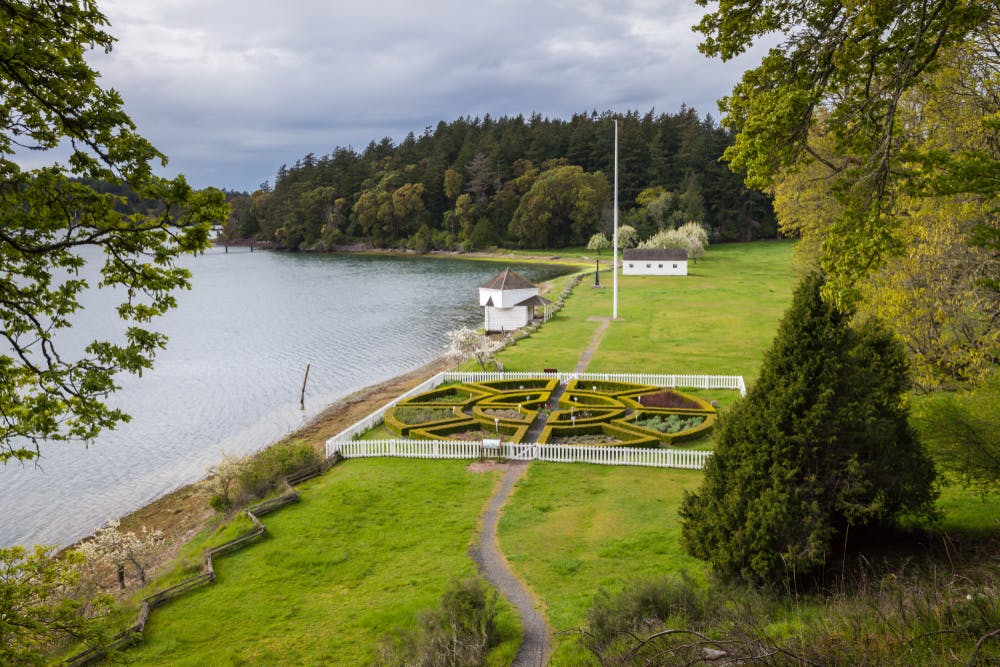 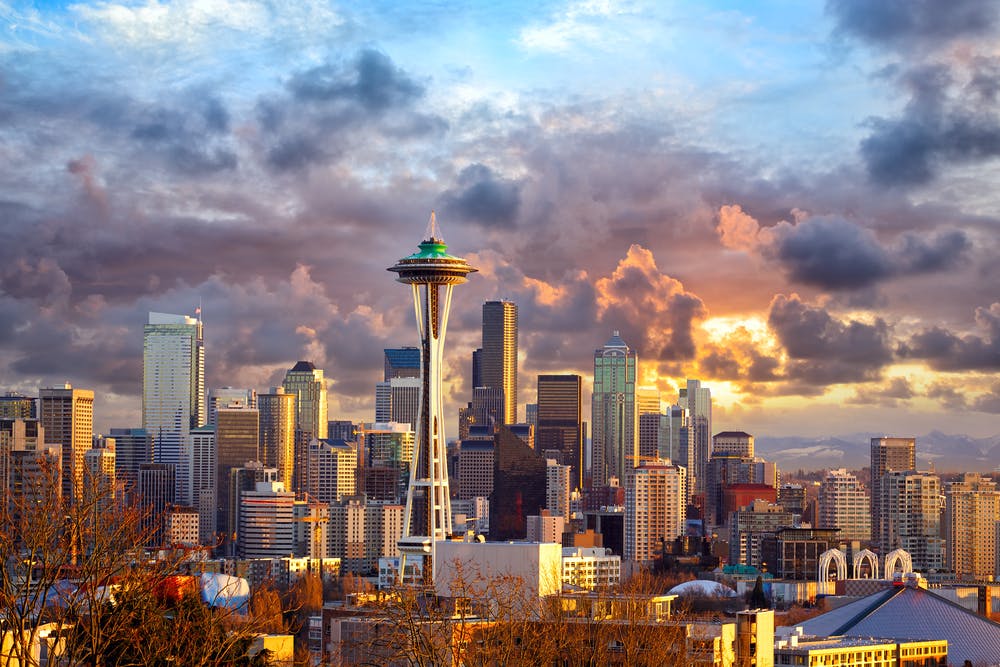 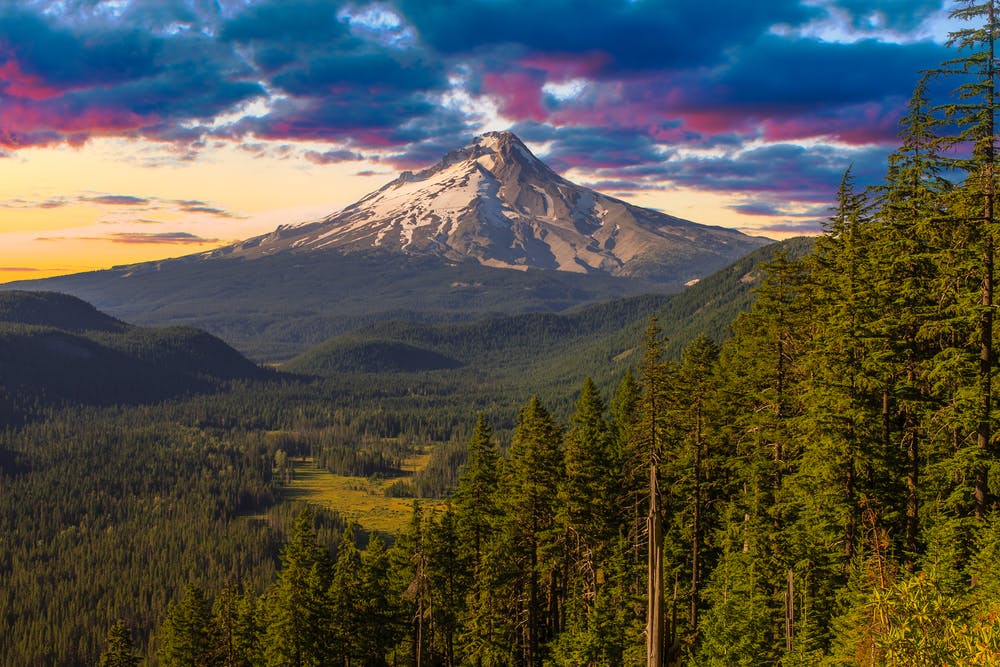 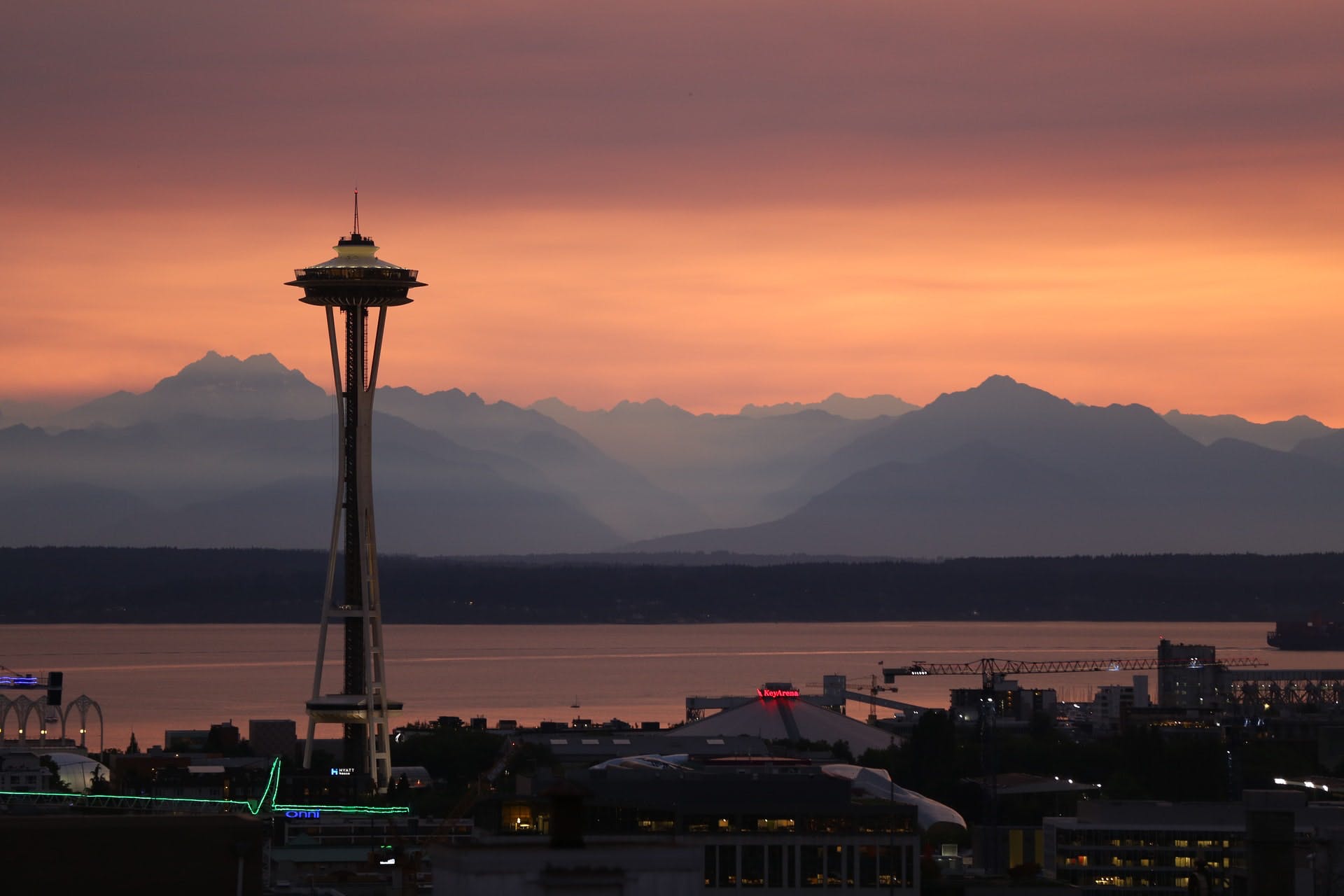 Seattle to Casper
View all road trips starting from Everett, WA
RV Dump Stations Near Everett, WA
Everett, WA is near lots of beautiful, interesting sites to explore in an RV, and there are plenty of RV maintenance resources throughout the state. This list is a collection of the best RV dump stations in Everett, WA. You can find free non-potable water at a large portion of these locations also. Here are the most popular Everett, WA dump sites for you to watch for during your trip. There are a few storage businesses in the area that let you use their dump stations at no cost too.
View all dump stations near Everett, WA
RV Storage Near Everett, WA
As the biggest city in Washington, Seattle is a popular road trip destination for RVers. The Emerald City is known for its Pike Place Market and towering Space Needle. Thankfully for travelers, the region is home to many great campgrounds and RV storage facilities. When choosing an RV storage facility in Seattle, Washington, keep in mind that the Puget Sound region has mild weather with a lot of precipitation. You’ll want to consider this when choosing between outdoor and indoor storage options. The following facilities for RV storage Seattle, which are listed in no particular order, will serve your needs.
View all RV storage facilities near Everett, WA
Why Rent with RVshare?

Frequently Asked Questions About Renting an RV Near Everett, WA

How much does it cost to rent an RV in Everett, WA by trip duration?

When renting an RV in Everett, Washington, you can expect to pay $240 a night for motorhomes and $150 a night for travel trailers.

What does RVshare Protection cover with my Everett, WA RV rental?

RVshare's protection plan standard package covers up to $300,000 in comprehensive and collision coverage based on the value of the RV. It also includes free 24/7 roadside assistance, towing and tire service. For more information on RVshare insurance, click here.

What do I need to know before renting an RV in Everett, WA?

Everett is a beautiful town on the Puget Sound north of Seattle. It's a small town just off of I-5, and most driving you do in Everett will be on the interstate or surface streets. Be sure to visit Boeing's Future of Flight where you can see the plane factory. You can also visit the Mukilteo Lighthouse or the Imagine Children's Museum.

What are the RV rental requirements in Everett, WA?

There is no special license needed to rent an RV, but it never hurts to check state websites if you are unsure about traveling there. and any regulations they may have.

What are some tips for first-time RV renters in Everett, WA?

Renting an RV in Everett, Washington puts you near the water, and in a great spot to explore the islands and coast of the Pacific Northwest. Everett is half an hour north of Seattle, and the best time to visit is during the summer. This is also the busiest time, however, so you'll want to make reservations at campgrounds before you arrive.

What are the minimum age requirements for renting an RV in Everett, WA?

What is included in my Everett, WA RV rental?

Are there pet friendly RVs for rent in Everett, WA?

Can I have my Everett, WA RV rental delivered to a specified location?

Are there one way rental options from Everett, WA?