Popular RV Rentals Near Utica, New York for Any Budget

Get a great deal on an RV to travel around Utica, New York and the surrounding area. The best options are travel trailers starting at $60 nightly. You can also acquire toy haulers beginning at $154 per night. Class C motorhomes are available for as little as $165 per night.

New York City is one of the globe's most significant commercial, financial, and cultural hubs. Go to Central Park to spend time at its playgrounds and zoo. Take a boat ride to the New York Harbor to see the Statue of Liberty. You will love taking pictures outside the 103-story Empire State Building. Check out the city's cafes and museums.

Buffalo is the second-largest metropolis in New York. See various exotic and endangered animals at the Buffalo Zoo. You can also go to Buffalo and Erie County Botanical Gardens to explore greenhouses and domes with exotic plants. Do not miss downtown Buffalo's eclectic restaurants and lively nightclubs.

Utica was home to the Mohawk Nation before the arrival of European settlers. In 1734, it was part of a grant from King George II of England, William Cosby, and other people. The British constructed Fort Schuyler in 1758, and settlers started arriving in the area in 1773. The new owners tried to develop the region by building structures and establishing businesses. In 1798, the area's residents decided to call it Utica. That same year, Utica was incorporated as a village following the creation of Oneida County.

The Erie Canal was built near the village in 1825 and made it a significant commercial hub that resulted in enormous economic and population growth within a few years. In 1832, Utica officially became a city. The city established Utica State Hospital for the Insane in 1842 and later changed its name to Mohawk Valley Psychiatrist Center. It received its first higher institution of learning, Utica College, in 1842. The city was also a major contributor to the state's textile industry for many years.

Today, Utica covers 17 square miles with a population of more than 59,000. It is the county seat of Oneida County. The city has several attractions, including Utica Zoo, Stanley Center for the Arts, and Matt Brewing Company. It features some of the best retail stores and restaurants in the state.

Syracuse, New York – You will enjoy touring this city of over 142,000 people. Go to the 1850 Weighlock Building, where you will find the Erie Canal Museum showcasing the history of the iconic waterway. The Rosamond Gifford Zoo has elephants, penguins, and other creatures. Destiny USA is the place to dine and be entertained in the evening.

Oneida, New York – With a population of just over 10,000, this community has a lot to offer. Visit Penn Mountain State Park, where you can engage in camping, hiking, hunting, fishing, and observing wildlife. Guests looking for cafes, retail shops, and entertainment venues can head over to Glenwood Shopping Plaza, which also boasts ample parking spaces for all vehicle sizes.

Rome, New York – This city in the central part of New York is home to 32,000 residents. Tour Woods Valley Ski Area to engage in water sports. Anglers can try catching bass, walleye, and northern pike in the Delta Reservoir while golfers can hit nine holes out at Mohawk Glen Golf Course.

Shenandoah National Park is 406 miles from Utica. Carry binoculars to help see black bears, deer, squirrels, and birds inhabiting this region. Hiking the trails traversing the park, such as the Appalachian Trail and Mary's Rock Summit Trail, will allow you to experience waterfalls, wetlands, and rocky landscapes.

Drive 530 miles from Utica to Acadia National Park. Step foot on the tallest mountain on the East Coast by hiking the Cadillac Summit Loop Trail. History buffs will love exploring Bass Harbor Head Light Station, a 19th-century lighthouse, or visiting Abbe Museum to discover exhibits about the Wabanaki people. See if you can go to Jordan Pond House Restaurant to sample delicious meals while enjoying panoramic views of Jordan Pond.

Delta Lake State Park near Utica has plenty of fun activities throughout the year. You can go hiking and picnicking during warmer months or cross-country skiing and snowshoeing during winter. If you prefer water-based recreation, try fishing, swimming, canoeing, power boating, or Jet Skiing on Delta Lake. Watching wildlife is another activity you can enjoy there.

Glimmerglass State Park has everything for everyone. Anglers can try catching fish on Otsego Lake. Guests looking to break a sweat can make use of the numerous trails crisscrossing the area. If you like winter activities, tour this park during the winter months to participate in cross-country skiing, ice fishing, and snowshoeing. Picnicking and camping are also possible in the park.

Verona Beach State Park is a haven for outdoor recreation. This area has a few trails for hiking and biking. You can spend sunny days swimming and boating on Oneida Lake, which is also a great fishing spot. Sunbathing or making sand castles is a great way to relax.

Fort Stanwix National Monument is a military defense base that was constructed in 1758 during the French and Indian War. It has various trails and exciting sites that you might like to explore.

Harriet Tubman National Historical Park is where Harriet Tubman, an American abolitionist and social activist, lived and was buried.

Delta Lake State Park on the Delta Reservoir is an affordable facility with showers, boat launches, trails, picnic tables, and grills. Another option is Herkimer Diamond KIA Resort, which has a mine, jewelry store, and restaurant. The facility has 140 RV sites with access to fresh water, electricity, and sewer amenities. Check out West Cada Creek Campsites if you love water-related activities. Besides offering canoe and kayak rentals, this pet-friendly area has a pool and showers.

You can get New York dump station services at Huntington Treatment Plant. This destination is open from Monday through Saturday and has no fees. Niagara Falls Campground is another excellent location just seven miles from the famous Niagara Falls. Using the area's dump station is free for registered guests while unregistered visitors have to pay a small fee. You can also consider Marion Campground and RV Park, which is open all year-round and has potable and non-potable water. Members of the public must pay a nominal fee to access the area.

L and L Self Storage is a reliable facility offering storage services for all RV sizes. It has video cameras, lighting, and gates to keep it secure. A-Verdi Self-Storage's modern facility is safe, thanks to its surveillance cameras and a solid gate. Big Blue Self Storage operates 24 hours a day. It has an electrically controlled gate and CCTV cameras to ensure security. 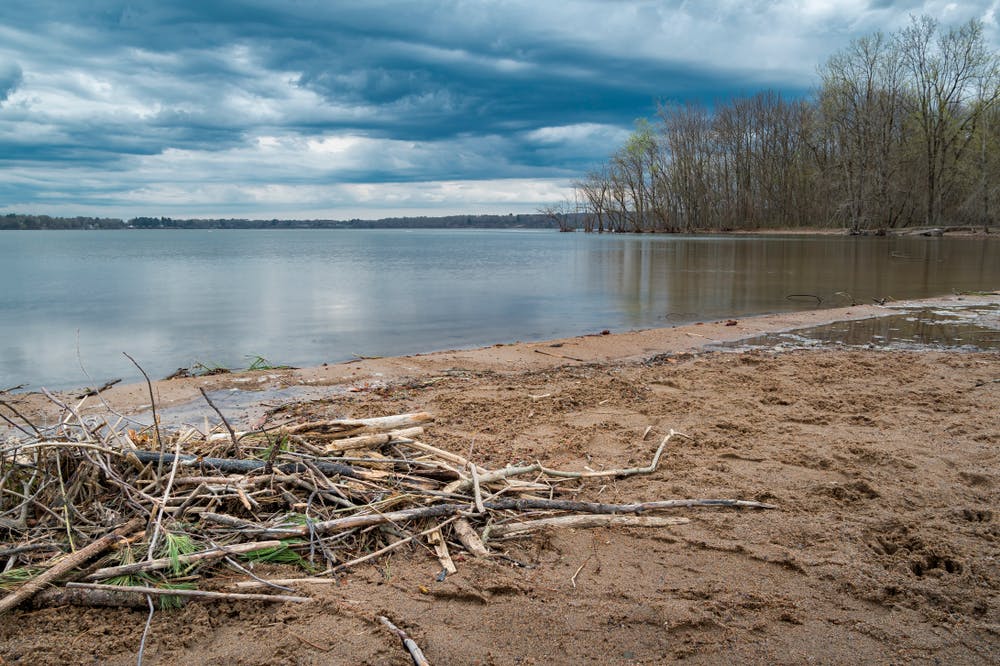 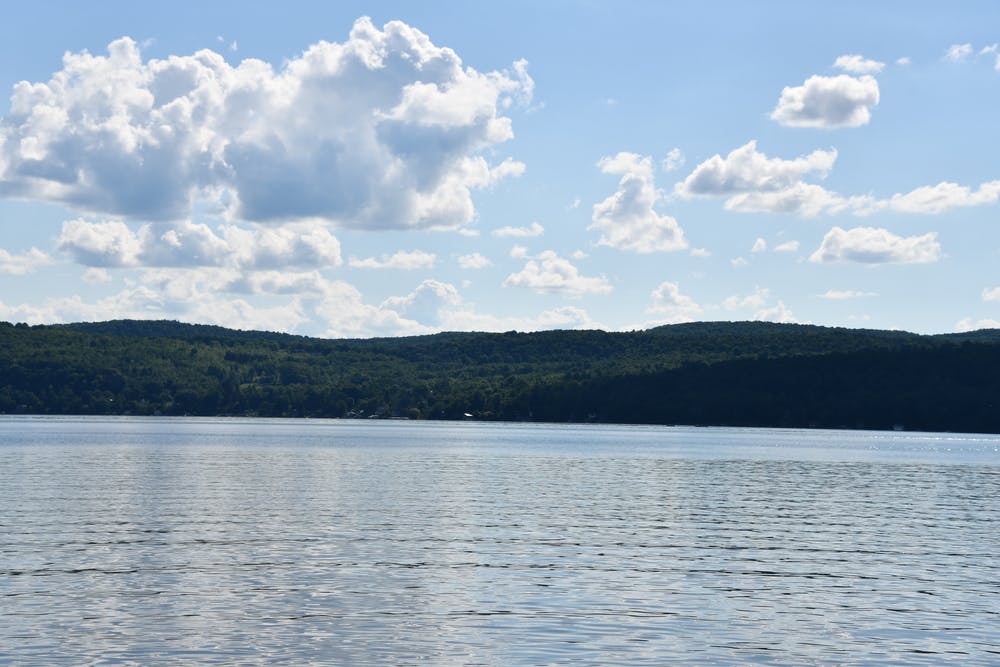 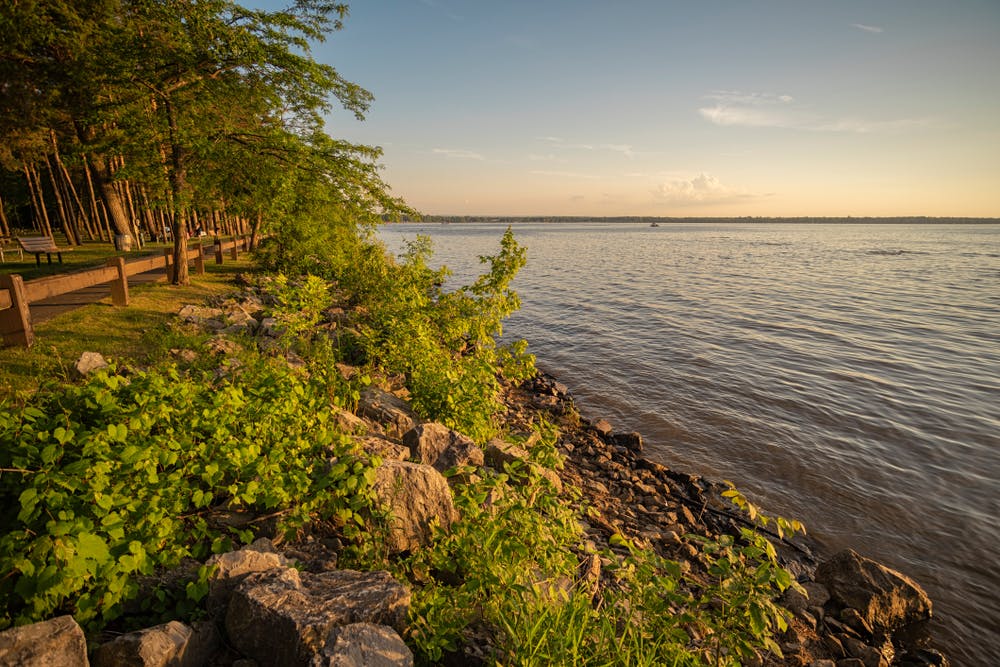 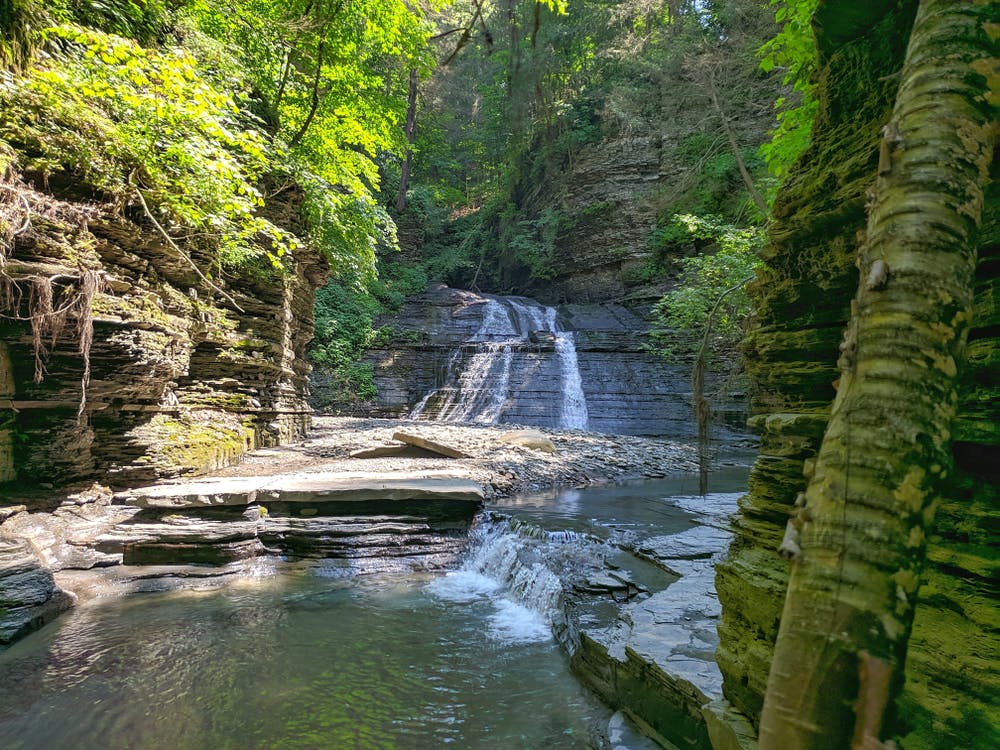 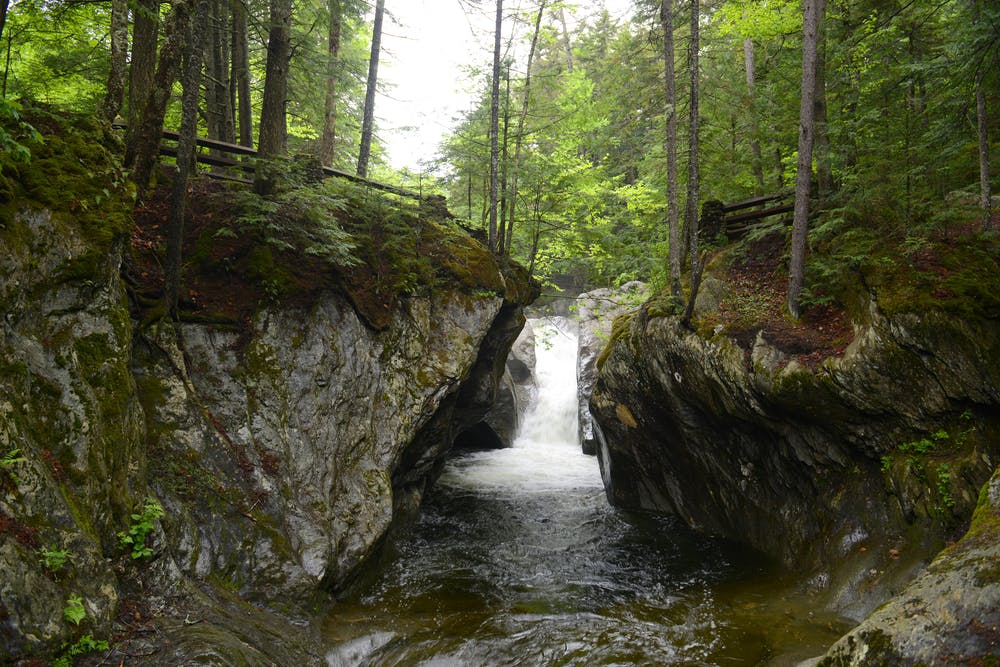 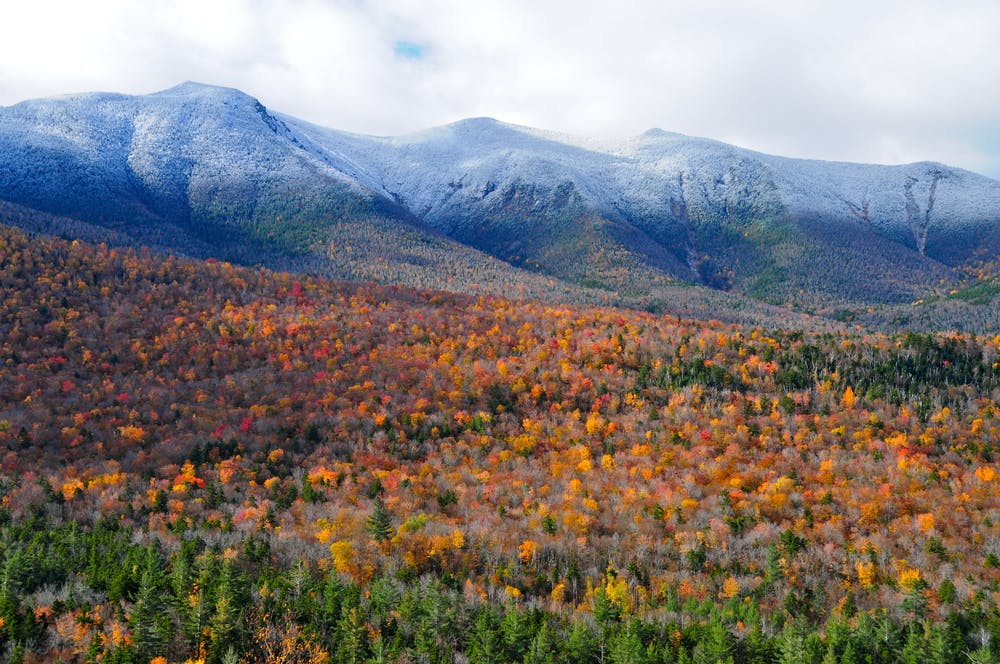 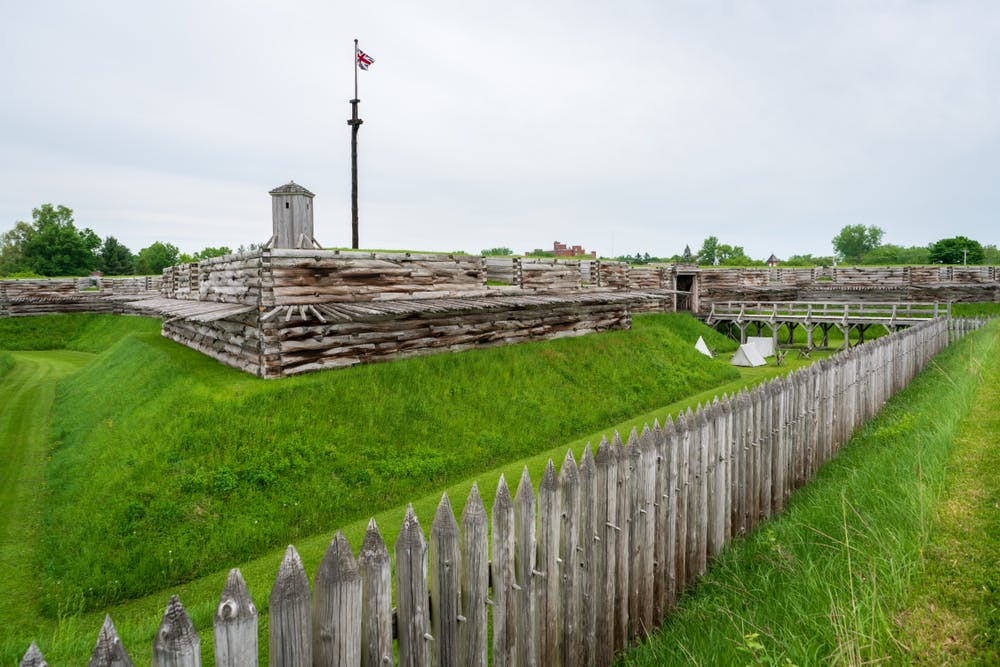 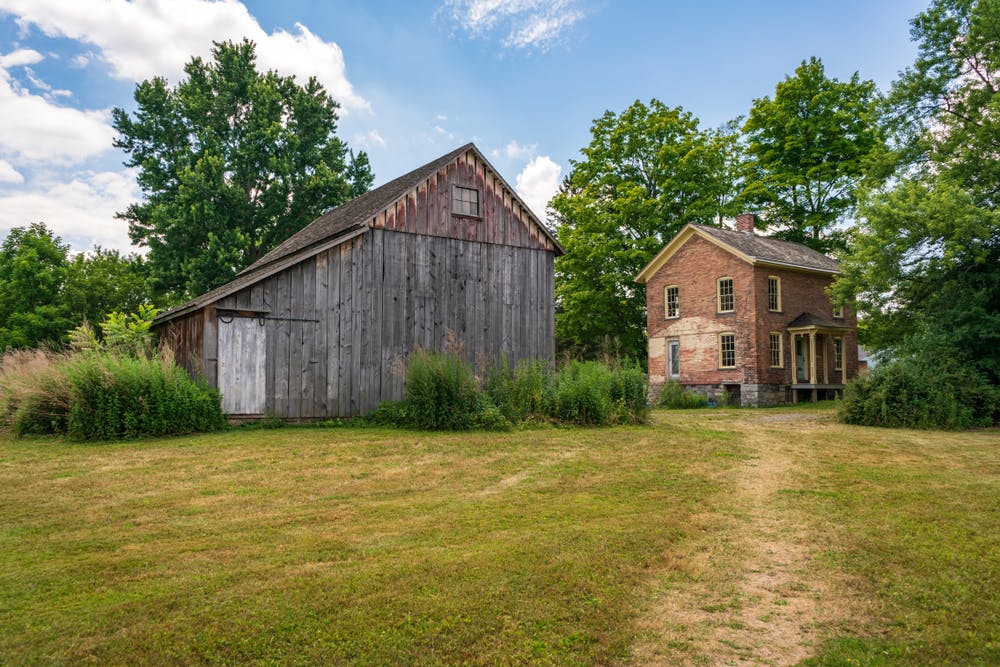 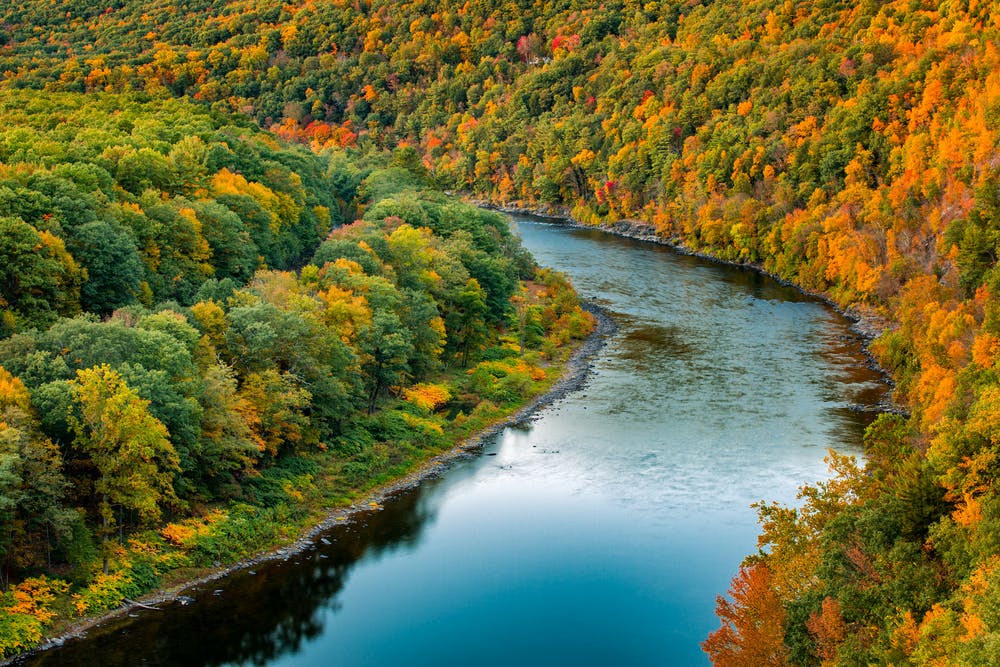 Delta Lake State ParkHerkimer Diamond KOA ResortWest Cada Creek CampsitesKayuta Lake CampgroundButternut Hill RV CampingVillages RV Park at Turning StoneThe Landing CampgroundSpruce Creek CampgroundTrail’s End CampgroundAdirondack Gateway Campground
View campgrounds near Utica, NY
RV Dump Stations Near Utica, NY
Ithaca is in the Fingerlakes Region of the state and has plenty of dump stations, many of which are located in campgrounds and RV parks. There is a free dump at the Watkins Glen International Raceway.
View all dump stations near Utica, NY
RV Storage Near Utica, NY
If you’re in the Utica, Rome, or Oneida areas of New York, then you’re in a part of the state with lots of camping and outdoor destinations, such as Oneida Lake and Lake Ontario. Conveniently, there are options for RV storage in Utica, Rome, or Oneida as well. Read on to learn about six of the best ones, which are listed below in random order. Snowfall in the area can reach almost 100 inches each year, so choose outside RV storage in Utica, Rome, or Oneida only if you’ve got an RV in superb condition. Otherwise, your RV may suffer damage from the elements.
View all RV storage facilities near Utica, NY
Why Rent with RVshare?

Frequently Asked Questions About Renting an RV Near Utica, NY

How much does it cost to rent an RV in Utica?

Do you need to be a certain age to rent an RV in Utica?

Yes. The minimum age is 25 to be eligible to get an RV Rental in Utica from RVshare.

Does RVshare offer one way RV rentals in Utica?