Popular RV Rentals Near Port Aransas, Texas for Any Budget

Enjoy an RV trip to Port Aransas, Texas and the surrounding area in a rental from RVshare! There are over 100 vehicles within RVshare's Port Aransas inventory. You can book a 24-foot Class C motorhome that sleeps six for $199 per night or a 23-foot travel trailer that sleeps seven for $145 per night. Many of the area vehicles are available for delivery and instant booking. Plus, renting an RV enables you to enjoy all the perks of RV life without having to cope with the realities of ownership.

Houston is a popular vacation destination in Southeast Texas. The city is located on a scenic section of Texas's upper Gulf Coast. Its top attractions include a space center, zoo, and fine arts museum. You'll need at least three days to explore the city. You'll want to squeeze in a visit to the Montrose neighborhood and nearby Galveston Island.

Dallas is a thriving community located in North Texas. A three-day visit will give you enough time to see most of the area's top attractions, including the Sixth Floor Museum at Dealey Plaza, Dallas Arboretum, Houston Botanical Garden, and Reunion Tower.

San Antonio is a culturally diverse city located in South Central Texas. The area's top destinations include the Alamo, SeaWorld, and Riverwalk. Come hungry and curious, because San Antonio is a hotbed of unique cuisine and entertainment. Hispanic cultural influences are very prevalent here, and you won't want to miss the opportunity to see the area's impressive Spanish Missions and local heritage museums.

Port Aransas is a coastal resort town located on the northeast side of Mustang Island. The town encompasses several miles of coastline and is home to multiple beaches. Port Aransas is considered one of Texas's top fishing and birding destinations. There are several wildlife preserves and open spaces scattered across the community. The area encompasses a prevalent section of Central Flyaway, a bird migration route that spans parts of Mexico, the United States, and Canada.

The area began as a sheep and cattle grazing station. During the 19th century, it became a popular gathering spot for pirates and according to local lore, several pirates even hid their treasure here. During the 1850s, efforts were made to build a canal that connected Port Aransas to nearby Corpus Christi. It was during this time that the area's first lighthouse, jetties, and docks were built. Port Aransas was also a significant waterway for the Confederacy during the Civil War.

Port Aransas's year-round warm weather also makes it a popular spot for RV and tent camping. Overnight camping is even permitted on some of the local beaches. Plus, there are plenty of nearby private and public campgrounds with water, electricity, and sewer hookups.

Corpus Christi, Texas - Corpus Christi is a large city located about 40 minutes west of Port Aransas. This coastal Texas community is home to around 326,000 people. The city's top destinations include the Texas State Aquarium, the Padre Island National Seashore, and the U.S.S. Lexington Museum.

Aransas Pass, Texas - Aransas Pass is located on the western side and mainland section of Aransas Bay. There is a free ferry service that runs between Aransas Pass and Port Aransas. Popular area attractions include the Port Aransas Nature Preserve at Charlie's Pasture and the Maxine Flournoy Third Coast Squadron of the Commemorative Air Force at Alice International Airport.

Rockport, Texas - Rockport is a small community located along Aransas Bay. The town is known for its large live oaks, coastal beaches, and marinas. Popular area attractions include Big Blue Crab, the Key Allegro Marina, and Little Bay. According to the latest census, the area is home to just over 8,000 people.

Big Bend is an expansive desert park located in West Texas. The unobstructed space is home to a section of the Rio Grande River, Emory Peak, and Toll Mountain. The park has 25 campsites with full hookups. Plus, there are several first-come, first-served primitive roadside camping spots.

Guadalupe Mountains National Park is the largest wilderness area in Texas. The scenic desert mountain landscape is a popular spot for hiking and camping. There are two campgrounds within the park. However, there are no hookups or dump stations.

Carlsbad Caverns National Park is a stunning spot located in southeastern New Mexico. The park is home to over 119 limestone caves and an expansive section of the Chihuahuan Desert. There is no overnight camping within the park, so private campgrounds are the way to go. Area weather can be very extreme, with temperatures dropping as much as 50 degrees overnight. As such, campers should be prepared to experience a variety of highs and lows during their visits.

Mustang Island State Park encompasses a long stretch of sandy beach in Corpus Christi. The park has 98 sites, including 48 with water and electricity. Park highlights include the Mustang Island Paddling Trail and several shallow-water fishing areas.

Goose Island State Park encompasses a small section of the Gulf Coast in Rockport, Texas. The park is a popular destination for camping, fishing, and birding. There are 44 bayside campsites and 57 foreset campsites. All sites come with water and electricity. The park is also home to a 1,620-foot fishing pier and multiple boat launch areas.

Lake Corpus Christi State Park is a stunning open space located in nearby Mathis, Texas. The lake is a popular spot for watersports and birding. There is a $5 entrance fee for guests 12 and over. The park does not have overnight camping.

The Aransas Pass Lighthouse is located along the scenic Gulf of Mexico in Port Aransas. The historic property is the oldest surviving structure in the Port Aransas area. Since the lighthouse is privately owned, visitors cannot tour the grounds. However, many people opt to kayak or canoe to the dolphin-inhabited waters that surround the lighthouse.

You can also satisfy your craving for local history at the Tarpon Inn in Port Aransas. This oceanside building was originally built to house the men working on the Mansfield Jetty. It has also been used as a storm shelter. The 24-room inn welcomes tourists year-round.

C.S.A. is another must-see historical landmark. This granite marker explains the significance of the Aransas Pass during the Civil War.

Hatch RV Park is a family-owned camping resort located in Corpus Christi, Texas. The facility has 85-foot pull-through sites, free Wi-Fi, a pool, and a spa. Spots cost $48 per day or $290 per week. Electricity is included in all rates.

Ransom Road RV Park is located on the coast of Aransas Pass. The palm-lined parking spots go for as little as $52 per night. Weekly and monthly rates are available. The park has a recreation room called the Captain's Den. The campground is just two blocks from a boat launch.

NAS RV Park Corpus Christi is located on the grounds of the Naval Air Station Corpus Christ on Corpus Christi Bay. A campsite with no hookups will run you $15 per night. Meanwhile, the cost for 30-amp and 50-amp sites ranges between $17 and $22 per evening.

RVshare has compiled a list of the best RV storage facilities in Texas. The Boat Lodge offers comprehensive vehicle, boat, and RV storage on A-1 Hill in Port Aransas. Their uncovered and covered outdoor parking spaces range in size from 12-by-20 feet to 2-by-45 feet and they offer pull-through parking for large motorhomes. Their large storage yard features ample lighting and video surveillance. Keypad-enabled access gates ensure that only registered tenants can enter the facility. You'll also find an ample amount of uncovered and covered parking at Big Shell Boat & RV Storage in Aransas Pass. Spots range in size from 10-by-40 feet to 15-by-60 feet. The facility features Fort Knox security, power outlets, and 24-hour access. 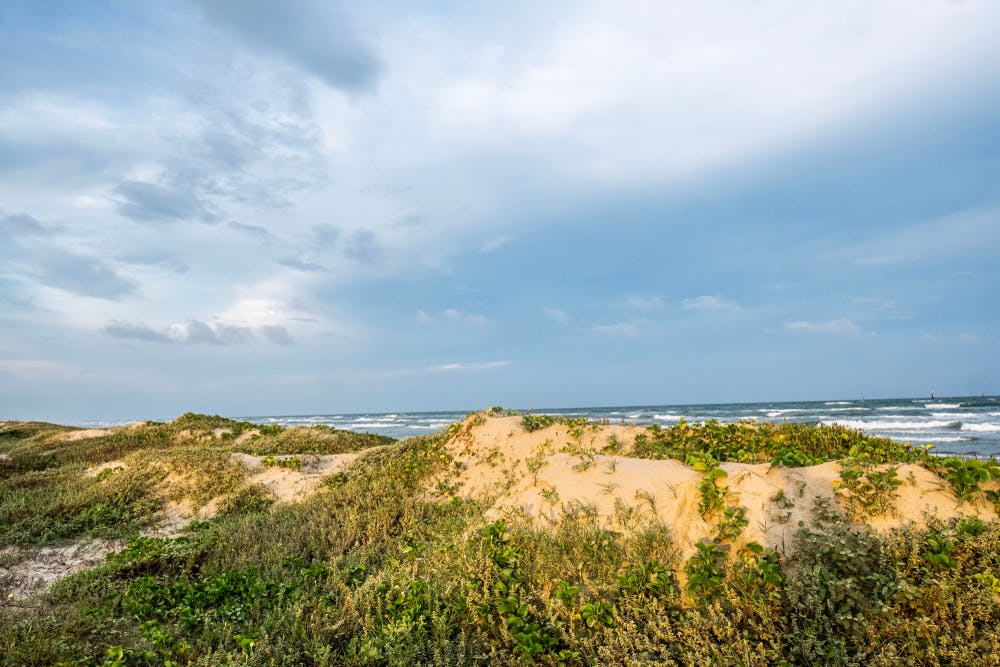 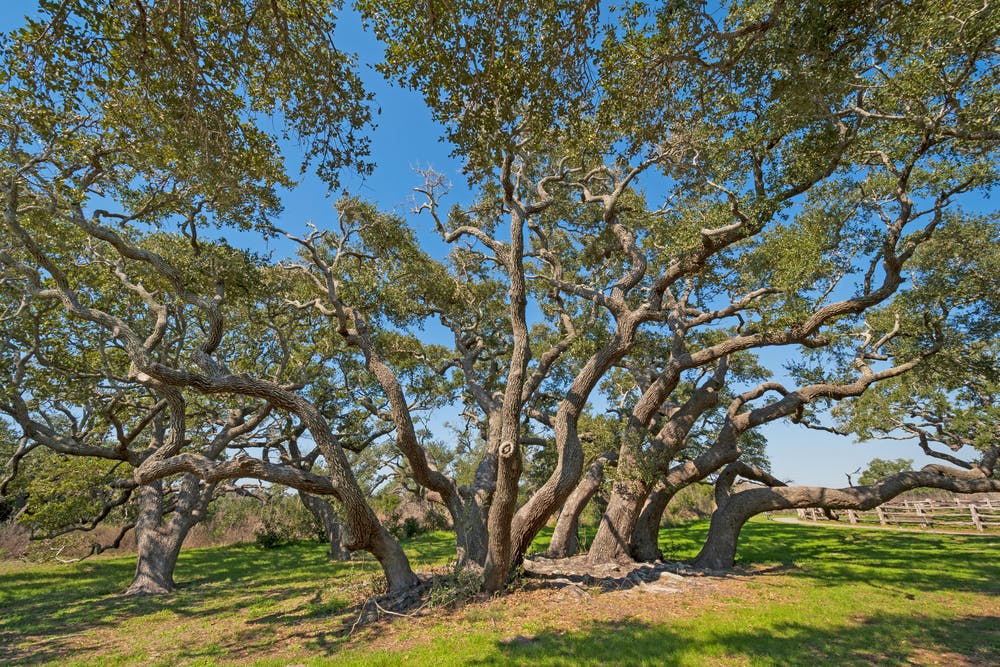 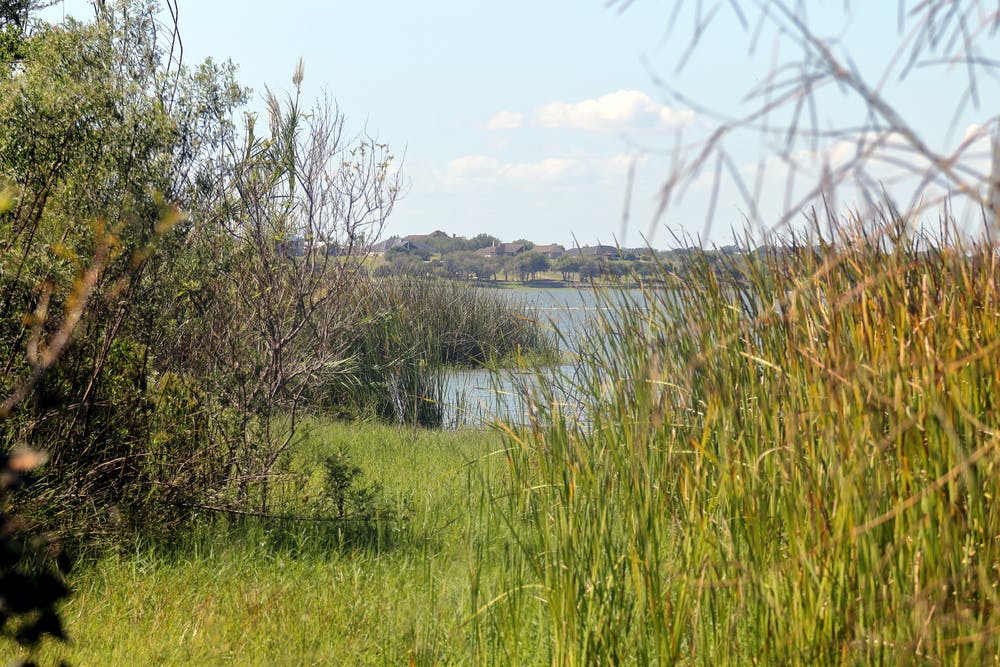 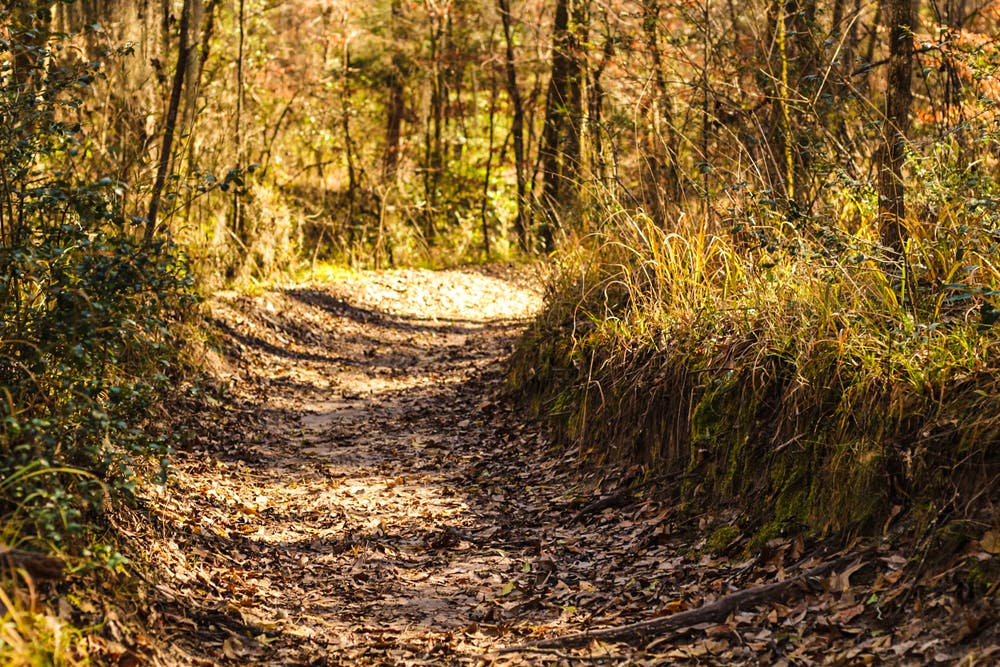 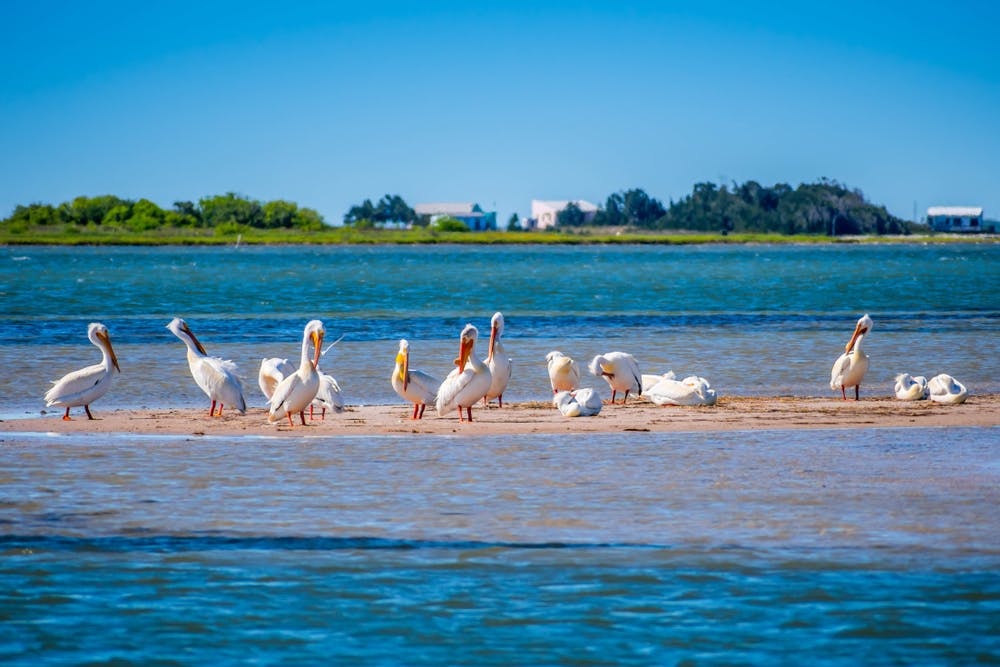 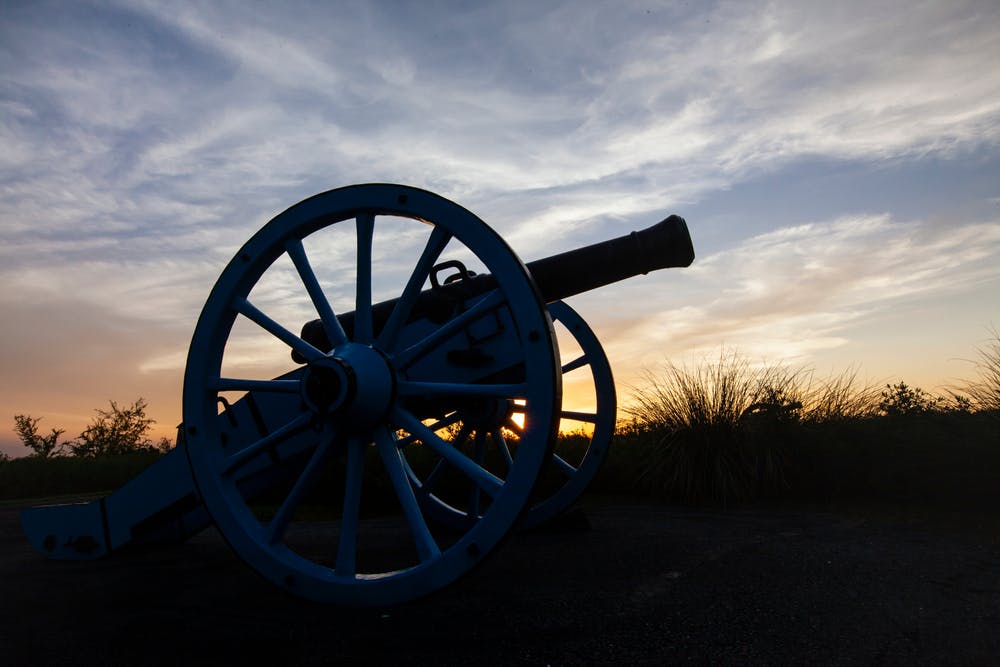 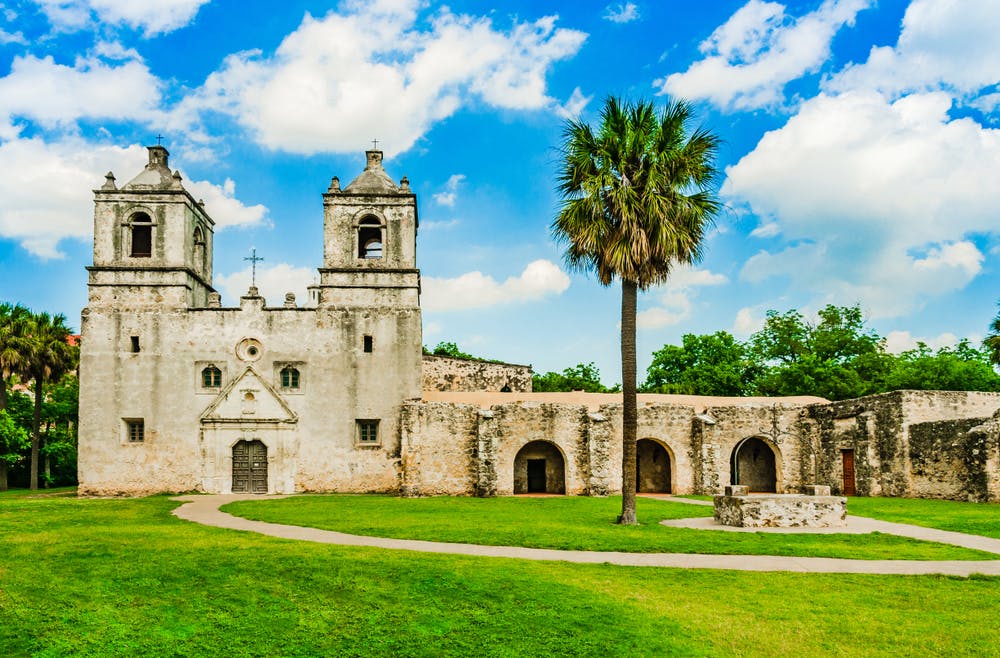 Puerto Del Sol RV ParkHatch RV ParkRansom Road RV ParkNAS RV Park Corpus ChristiOn the Beach RV ParkBahia Vista Waterfront RV ParkPioneer Beach ResortPadre Palms RV ParkTexas Lakeside RV ResortLagoons RV Resort
View campgrounds near Port Aransas, TX
RV Dump Stations Near Port Aransas, TX
Visitors to San Antonio often take time to explore the River Walk, lively Pearl District and historic Alamo. This metro area in south-central Texas is also home to many travel plazas with affordable RV dump stations Texas.
View all dump stations near Port Aransas, TX
RV Storage Near Port Aransas, TX
Taking a road trip along the coastal byways of Texas is a great way to see a large part of the natural beauty this unique state possesses. There are many campgrounds you can visit while traveling in your personal RV or a rented motorhome, and you will meet many interesting people during your stays. You may need RV storage Corpus Christi for a time during your trip, and the hot and humid weather may be of concern. Fortunately, you have many options of covered and uncovered outdoor storage at these RV storage facilities in Corpus Christi, Texas, that are listed below in no particular order.
View all RV storage facilities near Port Aransas, TX
Why Rent with RVshare?

How much does it cost to rent an RV in Port Aransas?

Do you need to be a certain age to rent an RV in Port Aransas?

Yes. The minimum age is 25 to be eligible to get an RV Rental in Port Aransas from RVshare.

Does RVshare offer one way RV rentals in Port Aransas?