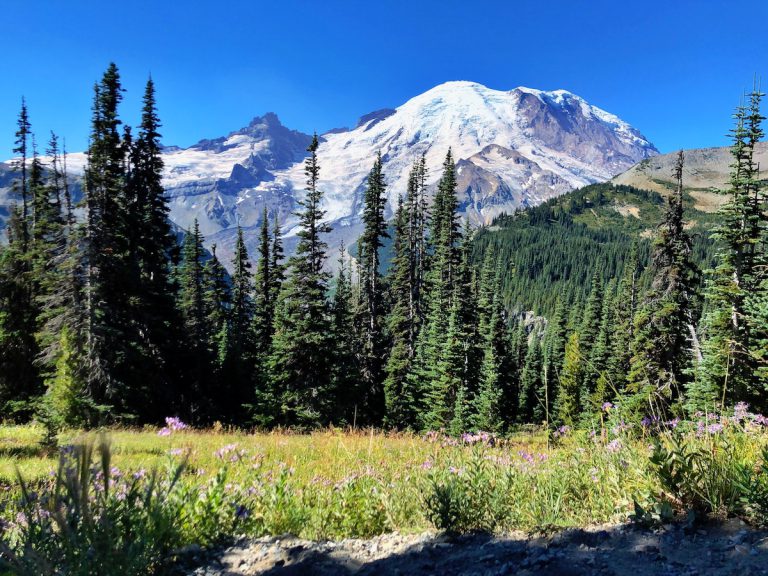 From a towering spire to active volcanoes to an actual rain forest, Washington offers a wide variety of famous and impressive landmarks. An RV road trip is the perfect way to see everything that Washington has to offer!

What are Some Famous Landmarks in Washington?

There are so many incredible natural places that make Washington unique, make sure you don’t miss these 10 Washington state landmarks!

Olympic National Park on Washington’s Olympic Peninsula offers visitors a chance to see and explore glacier-capped peaks, hot springs, 60 miles of Pacific coastline, and even a rain forest. It’s one of the most diverse national parks in the country and is home to over 650 archeological sites. Be sure to visit Hoh Rainforest, one of the last remaining temperate rainforests in the country.

Things to do near Olympic National Park: Seattle is nearby, offering lots to explore. It’s also a short trip across the border into Canada to visit Victoria, British Columbia. You’ll want to plan quite a few days to pack everything in. But don’t worry, we’ve got you covered with RV rentals in the area.

This iconic spire in Seattle is both an observation tower and a restaurant, and a must see if you’re looking for local landmarks and famous buildings. A trip to the top of the Space Needle not only provides visitors with views of the Seattle skyline, but also of the Cascade and Olympic mountains, Mount Rainier, and Puget Sound.

Things to do near the Space Needle: Explore Seattle! The Space Needle is located in the city, giving you the perfect opportunity to discover Seattle’s attractions. You’re also right outside Olympic National Park, Mount Rainier National Park, and the Puget Sound for outdoor activities. We’ve got you covered with local RV rentals if you need a way to explore.

Staying on the western side of the state, Mount Rainier National Park is another famous natural landmark you’ll want to see. Not only is Mount Rainier an active volcano, it’s also the most glaciated peak in the continental United States. The park offers amazing hiking through old growth forests and wildflower covered meadows. It’s open to visitors year round and provides plenty of adventures in all seasons.

Things to do near Mount Rainier National Park: The first 3 landmarks on our list are all close together, so be sure to check out Seattle and Olympic National Park as well. If you’re on the eastern side of the park, it’s not too far to Yakima if you’d like to visit wine country.

Washington has no shortage of amazing national parks. If you’re heading up to the northern part of the state, make a stop at North Cascades National Park. It’s one of the most remote national parks in the country and is full of views and hiking trails through the snow-capped Cascades Mountains with over 300 glacier! You’ll need a backcountry pass to access some of this remote beauty, but if you’re up for a challenge, North Cascades National Park isn’t to be missed!

Snoqualmie Falls is a 268 ft waterfall on the Snoqualmie River. It’s surrounded by a 2-acre park, observation decks, and hiking trails where you can view the waterfall. After heavy rains, the water covers the entire falls, creating a curtain effect. If the falls look a bit familiar, that’s because the they were featured in the tv show Twin Peaks!

Things to do near Snoqualmie Falls: Snoqualmie is a small town about 25 miles from Seattle. The Northwest Railway Museum is located in Snoqualmie and is the oldest and largest railway museum in Washington.

The San Juan Islands are just off the coast of western Washington, with the second largest being San Juan Island itself. Here you’ll find San Juan Island National Historic Park, also known as the American and English Camps. The island was once a disputed territory between the British and Americans over a killed pig in the Pig War during the 1800s. Today it’s home to the American Camp on the southern end of the island and the British Camp on the northwest side. It provides visitors with great hiking as well as bird and orca watching.

Things to do near the San Juan Island National Historic Park: Explore the rest of the San Juan islands, visit Olympic National Park, and wander through Seattle. You can also visit the Puget Sound. If you’re looking for RV rentals in the area, we’ve got you covered.

Just south of the San Juan Islands is Puget Sound. Puget Sound is a collection of waterways and islands in an inlet of the Pacific Ocean and part of the Salish Sea. It’s full of activities for adventurers, such as Deception Pass State Park where you can hike, camp, boat, and explore tide pools. There’s also Blake Island State Park which is home to Tillicum Village, where visitors can learn about Pacific Northwest Native American culture.

Things to do near Puget Sound: Take advantage of the water and do some boating, whale watching, and island hopping. You can head up to the San Juan Islands or back to the mainland and visit Olympic National Park and Seattle. We’ve got you covered with local RV rentals if you need a way to explore.

Mount St. Helens became a national monument after it’s eruption in the 1980s. Today you can hike on the many trails, camp, picnic, and even climb to the summit of the volcano. Stop by the visitors center to learn about the local geology and natural history of the area. You can also explore the Ape Cave lava tube, which is the third longest lava tube in America.

Things to do near Mount St. Helens National Volcanic Monument: St. Helens is easy to access from both Seattle, Washington and Portland, Oregon. Here are some nearby RV rentals to consider.

The Arthur Foss tugboat is likely the oldest wooden tugboat that is still floating. This boat was built in 1889 to tow ships over the Columbia River bar, was part of the Klondike Gold Rush, and was requisitioned by the U.S. Navy in World War II. It escaped bombing both at Pearl Harbor and Wake Island during WWII and is now a National Historic Landmark and on the National Register of Historic Places. It’s docked at the Historic Ships Wharf at Seattle’s Lake Union Park and is available for tours in summer.

Things to do near the Arthur Foss Tugboat: You’ll be in Seattle so check out our local’s city guide. Stop by the Space Needle then head out of town to any of the great national and state parks nearby. We’ve got you covered with local RV rentals if you need a way to explore.

Hardcore hikers will be familiar with the Pacific Crest Trail that runs through Washington into Canada. Also called the Pacific Crest National Scenic Trail, this long distance hiking and equestrian trail runs from just north of the Washington border down to the southern border of California. The trail is 2,653 miles long and is one of the trails that makes up the Triple Crown of Hiking. Long distance hikers can hike the entire trail, but anyone can explore parts of it.

Things to do near the Pacific Crest Trail: The Pacific Crest Trail runs the length of the state and is pretty remote in some parts. It does pass close to Snoqualmie (so you can also visit the falls), as well as east of North Cascades National Park if you want to hike a bit of the trail.

Planning an RV Trip to Washington

An RV trip is an excellent way to tour the natural and popular of landmarks in Washington, and we’ve got all the resources you need to plan a perfect vacation.

Here are guides to some of the best state parks in Washington, as well as all the national parks in the country. And as always, we’re here to help when it comes to finding the best RV rentals.

7 Beautiful National Forests that Are Nearby Your Favorite National Parks

Thinking about visiting a national park but all the campgrounds…

RVers love hiking, and for good reason! While summer and…