This is about as close to Multnomah Falls as you can get without backwoods tent camping. The Ainsworth State Park campground is right off of the Historic Columbia River Highway at Horsetail Falls. In fact, you can even walk to the Horsetail Falls trailhead. Multnomah Falls is less than 10 minutes down the highway from Ainsworth State Park. Although the park is very much immersed in ture, the larger riverside town of Cascade Locks is just 18 minutes to the east, and Portland is just 25 minutes to the west. 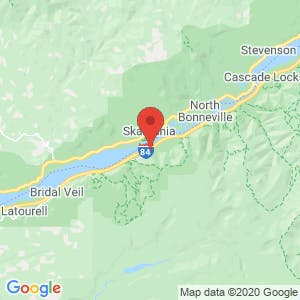 This Cascade Locks KOA is nestled right on the beautiful and scenic Historic Columbia River Highway, on the eastern outskirts of the small, idyllic Oregon town of Cascade Locks. With dining, fuel, a brewery, and more just down the street, and the endless wonders of the Columbia Gorge only minutes away, this campground is the perfect balance of convenience and wilderness. Multnomah Falls is under 30 minutes away, and Portland is only an hour away.

With all the amenities of your typical KOA campground and a beautifully scenic location, this KOA offers the great family-friendly camping, convenience, and proximity to ture that they’re known for. Spend the day hiking nearby waterfalls and then relax by the pool, replenish at the sck bar, and enjoy a family game night in the game room. Be sure to check out the charming town of Cascade Locks. 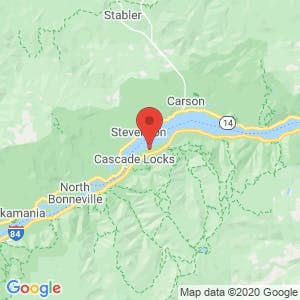 RV Rentals in Multnomah Falls, OR Plan your next adventure

Right off of I-5 in Washington, you’ll find the lovely and historic Lewis and Clark State Park. It’s directly between Portland and Seattle, an hour and a half from the former and two hours from the latter, making it the perfect midway point for people visiting both cities. The campground is about an hour and 40 minutes from Multnomah Falls, so it’s possible to do a day trip. There are a number of gas stations, restaurants, and parks nearby, and the immediate area offers hiking, horseback riding, and historic sites along the Oregon Trail

Situated in a beautiful forested area along several creeks and a river, this campground offers beautiful scenery and easy access to I-5. The area is quiet and peaceful and offers a great place to get away and enjoy some family time. Lawns double as playing fields, fire pits and amphitheaters provide great gathering spaces, and the surrounding area is full of hiking trails and horseback riding. Plus, history lovers will never want to leave, as the region is full of historical sites from the Oregon Trail. 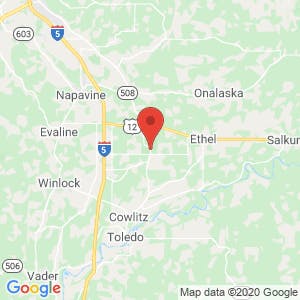 In Woodland, Washington just minutes off of I-5, the Columbia Riverfront RV Park sits on the Columbia River just an hour form Multnomah Falls and 40 minutes from Portland, Oregon. The location offers riverfront sites with lovely views and quick access to both Paradise Point State Park and the Ridgefield National Wildlife Refuge. It’s also just 30 minutes from the Mt. St. Helens Visitor Center, allowing guests to easily include a trip to the Mt. St. Helens National Volcanic Monument.

Staying along the Columbia River that lines the border between Oregon and Washington gives you easy access to most of the Pacific Northwest’s most treasured jewels. These include the scenic Historic Columbia River Highway, Multnomah Falls and several other major waterfalls, Mt. Hood, Mt. St. Helens, and more. You can even make an easy trip into Portland, Oregon, or continue on to Seattle, Washington. The campground itself offers convenient amenities but is quiet and scenic. With a clubhouse, park store, and playground, you have everything you need right there. 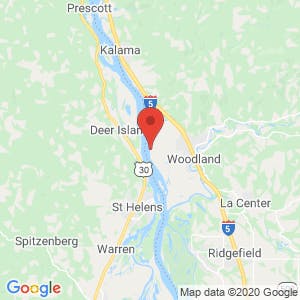 Located on Portland’s beloved Sauvie’s Island, the Reeder Beach Resort is only 30 minutes from downtown Portland and about an hour from Multnomah Falls. It sits right along the Columbia River, offering beach access and stunning views. The surrounding area has some amenities but is largely rural and quiet. That being said, you’re just minutes away from the outskirts of northwest Portland, where you’ll find plenty of dining, shopping and more

This campground is idyllic, peaceful, and stunning. Sauvie’s Island is known for its many U-pick farms, so you can easily purchase fresh produce and even farm-fresh eggs while staying at this campground. It’s home to some of the Portland area’s favorite beaches, great for swimming, fishing, and boating. The campground itself offers lovely riverside sites and all the amenities you could need. 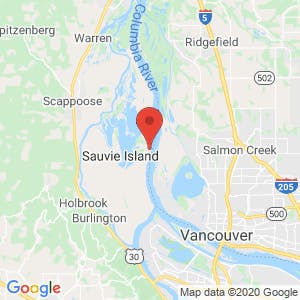 Only 30 minutes east of downtown Portland and 30 minutes west of Multnomah Falls, this Troutdale, Oregon campground is the perfect middle ground. It offers quick access to all the main attractions of both Portland and the Columbia River Gorge. Because it’s in a major Portland suburb, you’ll find plenty of dining, shopping, gas, and other amenities right at your doorstep. The Sandy Riverfront RV Resort also sits along the Sandy River, right in front of the Sandy River Delta Park and the Columbia River.

This is easily one of the most scenic parks in the greater Portland area. It offers immediate access to both the Columbia River and the Sandy River, as well as a massive park and greenspace. Right off the Historic Columbia River Highway, you can get to Multnomah Falls, Horseshoe Falls, and more very easily. There’s even ample wildlife in and around the campground, and the park is very nice and well-kept. 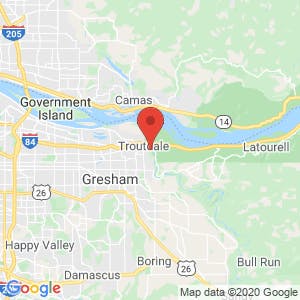 If you’re looking for a beautiful park that lets you soak up the most of the Pacific Northwest’s scenery while also providing modern amenities, this is the place to stay. Memaloose State Park is surrounded by beauty, nestled along the Columbia River and within the depths of the Mt. Hood National Forest. While the campground is minimal, allowing you to truly relax, it does offer modern conveniences such as hot showers, flush toilets, and full hookups. You’ll find historical information about the Chinook Indian tribes that inhabit this land, and there’s even a large granite monument where some pioneer burial grounds. 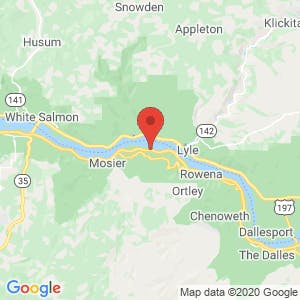 Located in North Portland along the Columbia River and 45 minutes from Multnomah Falls, this is one of the most conveniently located campgrounds on the list. You’re just minutes from downtown Portland and all of its main attractions, and less than a mile from I-5. The campground offers immediate access to a wide range of dining and shopping as well as supply stores and a golf club. Right on the Washington border, you can drive to Vancouver, Washington in 5 minutes.

Immersed in nature yet close to everything, the Columbia River RV Park makes for the perfect location for folks who want to do day trips to many scenic natural sites while staying in the city of Portland. You can easily visit Multnomah Falls and other Columbia River Gorge Sites, Mt. St. Helens, Mt. Hood, and even the Oregon Coast within one day. Although this campground is located in Portland, it’s in a calm area with riverside views and quiet neighbors. 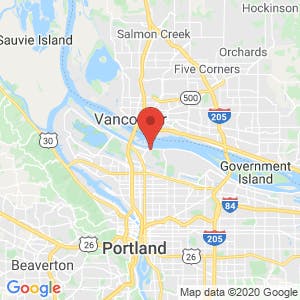 This Tualatin RV park is in the southwest suburbs of Portland, Oregon, just 30 minutes from downtown Portland and around an hour from Multnomah Falls. The suburb of Tualatin offers easy access to all kinds of dining and shopping, and you can easily access Portland’s public transportation system, allowing you to take the light rail into the city and enjoy its attractions car-free. The RV park is located just off of Highway 99, which provides a direct route to both I-5 and I-205.

Why you’ll love Roamer’s Rest RV Park This family-friendly RV park has all the amenities you need for a comfortable stay, and it’s in a great location. In the suburbs of Portland, you can easily use public transportation to get into the downtown area and avoid traffic congestion altogether, and you’re just a straight shot away from Multnomah Falls and other major Portland and Oregon destinations. The park is simple, quiet, and clean, and the owners are known for their friendliness and helpfulness. 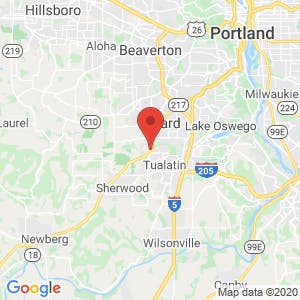 In Newberg, Oregon, just an hour south of Portland, you’ll find this charming campground and heritage hour. It’s only an hour and a half from Multnomah Falls, and it’s also located in the heart of Oregon wine country, so you could easily combine both in one trip. The campground is in a beautifully scenic, protected state park area along the Willamette River just 10 minutes from downtown Newberg, a charming town that’s home to several of Oregon’s most loved wineries.

The perfect combination of comfort and wilderness, this state park and heritage area offers plenty of outdoor activities and scenic views while still providing the basics of hookups, hot showers, and more. The park is highly rated for its many activities, which include fishing, hiking, biking, boating, gardening, and more. 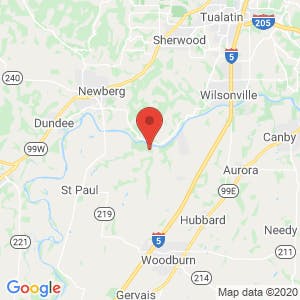 Oregon and the Pacific Northwest offer ample natural beauty and wonderful, family-friendly attractions. Multnomah Falls is one of the most iconic, but the campgrounds on this list provide easy access to dozens of other wonderful destinations. From waterfall campgrounds along the Columbia River to urban campgrounds with bus access to downtown Portland, there’s something for everyone.

RV Rentals in Multnomah Falls, OR Plan your next adventure

How much does it cost to camp in Multnomah Falls?

How much does it cost to RV park in Multnomah Falls?

How long can you stay at an RV Park in Multnomah Falls?

Are there pet friendly RV Parks & Campgrounds in Multnomah Falls?