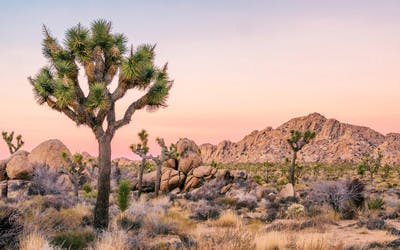 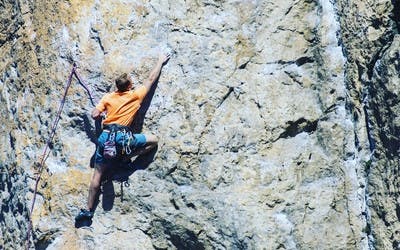 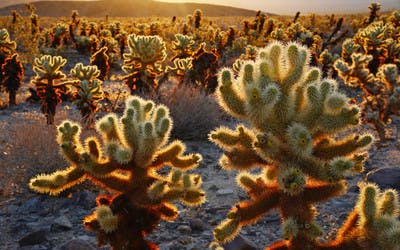 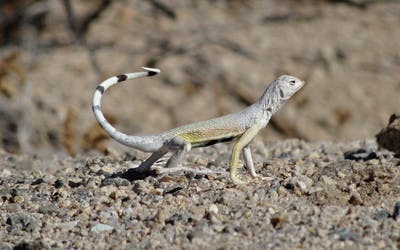 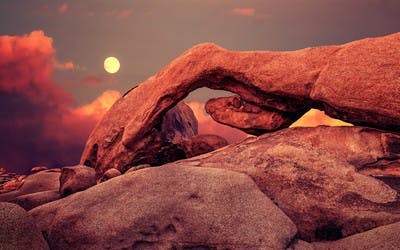 Spanning over 1,200 miles of southern California, Joshua Tree National Park is a sprawling landscape characterized by the collision of the Mojave and Colorado Deserts. It’s named for the twisted, alien-looking plants that thrive there, which are actually a species of yucca. Along with cactus-dotted sweeps of sand, Joshua Tree also offers stunning mountain views and unique rock formations, forged by erosion coupled with the ancient movements of the park’s underlying tectonic plates. The park is situated nearby, though not on top of, the famous San Andreas fault line, and a number of parallel faults pass through the park itself, explaining its surreal and rugged vistas.

Because of Joshua Tree’s extreme size and the variability of its elevation -- which ranges from about 700 to well over 5,000 feet -- it’s hard to make general statements about the area’s weather. However, due to its southeastern California location and desert climate, the park boasts relatively comfortable daytime temperatures year round, with average highs hoving around 60 F even in January and February. The park seldom sees freezing temperatures, but the nights can get chilly, with temperatures between 30-40 F. And during the high summer months, daytime temperatures in the triple-digits are not unheard of.

Although Joshua Tree is quite remote, there are some small towns offering facilities and lodging in the immediate area. Joshua Tree National Park gateways exist at Twentynine Palms and the town of the same name; visitors can also explore the bigger nearby destinations of Palm Springs and Palm Desert.

None of the on-site campgrounds offer hookups, and they often fill up on weekends from October through May (and during the week from February through May). We suggest you reserve a spot early if possible -- though most campsites in the park are available only on a first-come, first-served basis. You might also plan your visit during the off-season (June through September).

There are also a number of off-site, privately-owned campgrounds to choose from, as well as BLM land on which dispersed camping is legal both north and south of the park.

While carrying ample water, sunscreen, and nutrition is always important, in the desert, preparation is essential. Wear light, breathable, moisture-wicking clothing that offers the maximum amount of sun protection, and always carry more water than you think you’ll need. Lengthy, difficult hikes should not be attempted in the high summer heat.

Keep in mind, also, that Joshua Tree is home to a wide variety of fauna, some of which can pose a threat to your health and safety. Rattlesnakes, scorpions, and spiders all call the desert home, and many varieties are venomous. Always keep your distance from any wildlife you might encounter, and most importantly, always hike with a buddy!

These are just a few of the best hiking trails at Joshua Tree. For complete details, see the park page.

Terrain: A short and easy out-and-back trail located nearby the White Tank campground, this hike rewards visitors with unique rock formations and wildflowers.

Terrain: Easy and wheelchair-accessible, this short loop trail just south of the Cottonwood Visitors Center offers visitors the opportunity to walk on a bajada -- ie., a broad slope of alluvial material in the valley -- and to discover the area’s unique flora with well-marked interpretive signage.

Terrain: Cholla’s nickname is “teddy bear cactus,” but don’t stop to give any of this unique plant life a hug! Be sure to wear close-toed shoes.

Terrain: Winding its way through the stark desert landscape, this loop brings you past the ruins of one of the area’s most successful gold mines. For a shorter option, hike out and back to the mine instead of completing the loop.

Terrain: This moderate-to-strenuous hike takes visitors down into a canyon, where you’ll find the copse of palm trees the trail is named for. Keep in mind you’ll need to hike back out of the canyon once you’re done.

Terrain: This easy trail near the Cottonwood Campground offers 360 degree views and the ruins of an old mine. On a clear day, you’ll see the Salton Sea.

Terrain: Seeing 1,000 feet in elevation gain, this trail takes you to the peak of Ryan Mountain, where the views astound -- making it one of the most popular hikes in the park. Arrive early to avoid the crowds and harsh afternoon sunshine.

Terrain: This relatively short loop trail can be taken in either direction. View desert wildflowers and rock formations along the way.

What to Do at
Joshua Tree National Park

No one can wander the desert forever (though some of us would certainly like to try). When the relentless sunshine means it’s time to seek succor and sustenance -- and maybe a show -- here’s where to head in the Joshua Tree National Park area.

All that outdoorsy adventure can work up an appetite! Whether you’re in the mood for barbecue, pizza, or lighter fare, you’ll find what you’re looking for at these desert oases.

Looking for a healthy option to fuel your adventures? This Twentynine Palms favorite dishes up sandwiches, salads, and all sorts of organic treats so delicious, you’ll question whether or not they’re actually good for you.

In our opinion, Mexican food should be two things: delicious and cheap. In both cases, this Yucca Valley joint delivers -- and the portion sizes will boggle your mind.

With nigh-nightly events and a killer open mic program, this place is way more than a restaurant… but they do serve some of the most delicious eats in town. Reservations highly recommended.

Pie for the People!

No matter the question, “pizza” is almost always the answer. And in case you think authentic New York style pie couldn’t possibly have made it out into the desert, this ‘za shop will change your mind in a jiffy. (Okay, maybe not that fast. Each pie is hand-tossed and made to order, so it could take a few.)

Got a hankering for some authentic barbecue? This is your place -- but get there early, or you’ll find yourself at the back of a lengthy line. For best results, conclude your meal with fresh peach cobbler.

It might not sound like these two cuisines go together, but trust us: at Sam’s, they do. Their nearly two decades of successful service proves it.

Need to upgrade your hiking outfit or grab your friends at home a T-shirt?

From gifts to gear, here’s where to grab your goodies.

The desert may be physically dry, but it’s awash in cultural opportunities.

Children’s Discovery Museum of the Desert

As vast and vivid as Joshua Tree National Park is, there’s even more to see in the surrounding area. If you’ve got some extra time, plan to stop by a few of the following.

How to Get to
Joshua Tree National Park

Joshua Tree is serviced by the nearby Palm Springs airport, though you could also fly into larger hubs like Los Angeles or San Diego.

From LA, take I10 east to California Highway 62, also known as the Joshua Tree Highway. Avoid relying on GPS, which can get you turned around in these remote desert areas; check the official park website for a map and complete directions.

Although tent and car camping is a great way to experience this wild landscape, an RV offers the best combination of comfort and convenience. (And with that beating desert sun and abundant sand, you’ll be grateful for the opportunity to turn on the AC or grab a shower.)

If you don’t have an RV of your own, you can check out the RV rentals available in your area. In some cases, you can also rent a trailer and have it delivered and set up for you before your arrival.

Joshua Tree is a fee area, and the specific costs vary depending on your vehicle. As per late August 2018, here’s what you’ll be charged to enter

Seven-day pass for private, non-commercial vehicles (15 passenger capacity or less) and all occupants.

Seven-day pass for one or two passengers on a private, non-commercial motorcycle.

Seven-day pass for one individual with no car (bicyclist, hiker, pedestrian). Youth 15 and under are admitted for free.

You can also purchase a Joshua Tree National Park annual pass for $55, or take advantage of the park service’s special America the Beautiful annual pass, which gets you access to over 2,000 NPS-managed recreation sites across the country.

With its twisted namesake shrubs reaching for the sky, Joshua Tree is a magical place to visit -- and a photogenic one, too. We can’t wait to share in your park experience, so for the chance to be featured on our blog or social media channels, tag us in your posts or email us at [email protected]. Happy camping, desert dwellers!