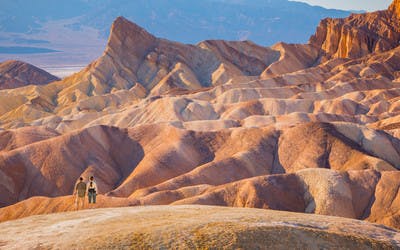 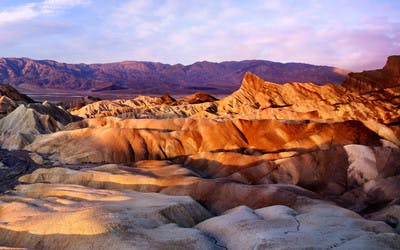 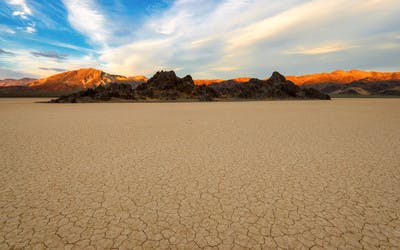 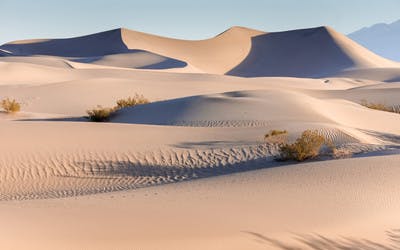 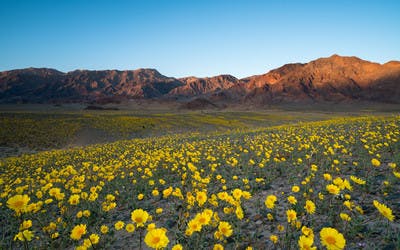 One of the hottest, driest, and least (apparently) hospitable places on Earth, Death Valley National Park is all about extremes. Its famous Badwater Basin is the lowest point in the United States at 282 feet below sea level, and its summertime temperatures regularly climb higher than 120 F -- in fact, the park’s Furnace Creek saw the world record highest air temperature of 134 F back in July of 1913. But despite the harsh realities of this landscape -- or perhaps because of them -- Death Valley National Park draws thousands of visitors each year, eager to experience this uniquely amplified environment. Brave explorers take to the desert’s severity to hike, bike, horseback ride, and birdwatch.

Death Valley is famous for its extreme weather, with daytime temperatures often presenting actual, physical danger. Although the park sees less than 2 inches of rain per year -- which is much less than what many other deserts experience -- violent late summer rain storms present the risk of flash floods. Spring and winter bring milder temperatures that only rarely dip below freezing, but high winds and cloud cover are common. The park varies tremendously in elevation, and higher areas are much cooler than lower ones; the National Park Service estimates that temperatures drop 3 to 5 F with every thousand vertical feet of elevation gain.

Straddling the California/Nevada border, Death Valley is fairly remote; visitors should ensure they have ample supplies (and fuel!) before they enter the property. However, there are some services available at the small communities within the park, such as Stovepipe Wells and Furnace Creek; you can also find facilities at area towns like Beatty, Nevada. For a bigger city excursion, the park is also within relatively easy driving distance of Las Vegas.

Despite its morbid name, this desert has supported human life since long before white people ever thought to set it aside for posterity. What is currently Death Valley National Park lies on unceded Timbisha Shoshone lands, and has historically also been inhabited by Paiute and Kawaiisu peoples. Read more about the indigenous history of Death Valley here.

Although taking on strenuous activity during the hottest part of the calendar year is a dangerous venture at Death Valley, the park is a popular destination for hikers, bikers, bird watchers, and other outdoor recreational seekers. Along with a landscape providing endless opportunities for these diversions, the park also offers some of the darkest skies in the country, making it a prime target for hobby astronomers and star gazers. Park rangers lead an array of guided tours and educational lectures; check the park calendar for full and up-to-date details.

Because of the sheer size of Death Valley National Park, the area encompasses both NPS-managed public campgrounds and privately-owned RV parks. There are also a number of RV campgrounds in the surrounding vicinity to choose from -- both resort-style parks and free or low-cost boondocking options.

Hiking in Death Valley is less about meandering down well-marked, forested paths and more about cutting your own trail through the desert. That said, there are a few designated trails within the park -- and they’re versatile and varied enough to satisfy every schedule and fitness level.

Whether it’s a quick hour-long stroll through Badwater Basin or an all-day (or even overnight) affair, when hiking in a desert situation, and particularly in the extremes of Death Valley, preparation is critical. Each member of your hiking party should have at least a gallon of water per two hiking hours; given the spareness of shade and natural cover, sun protection is necessary. For full details on hiking in Death Valley National Park, including a comprehensive list of demarcated trails, click here.

Terrain: Take an easy stroll through the lowest point in America, a sprawling salt flat with stunning views of the surrounding mountains.

Terrain: A moderate-to-difficult height that doesn’t see too much elevation gain, but does require some light rock scrambling in sections. Despite its scary name, this trail features beautiful wildflowers and excellent opportunities for bird spotting.

Terrain: See the most famous of Death Valley’s seven sets of dunes on this easy and relatively short trail. A great spot for sunrise or sunset.

Terrain: Only for the hardiest and most experienced of explorers, this strenuous, all-day trek sees over 3,000 feet of elevation gain and requires wayfinding with a compass. Panoramic vistas of the park. Leave early, bring adequate supplies, and do not attempt during the high heat of summer.

What to Do at
Death Valley National Park

Don’t get us wrong: when you’re in Death Valley, you’re very firmly in the desert. But there are some oases here and there for hungry, thirsty, and curious adventurers.

Despite its arid climate and apparent lack of life, the fare at Death Valley is anything but slim pickin’s.

Type: This traditional western watering hole serves up lunch and light bar snacks… but the star of the show at this joint is the beer. Choose from over 20 beers on tap or sample the house label. One thing’s for certain: you’ll find something to wet your whistle!

Type: This place proclaims itself the “best cooking in the valley.” We’ll let you make up your mind on that front -- but with pizza, burgers, salads, and over 150 beers to choose from, you’re sure to find something appetizing.

Type: This quick pit stop serves up Indian tacos (if you don’t know, don’t ask -- just trust us and go try them) as well as shaved ice, cold soda, and freshly-made fry bread

Type: Exploring the wasteland works up a mighty appetite -- so sidle up to this joint’s breakfast or dinner buffet to replace all those toasted calories. Box lunches also available by special request.

Fuel tank running dangerously low? Need trail snacks to stave off that grumbling tummy? Here’s where to stop inside and around the park to pick up some basic necessities. (Again, though: try and prepare yourself before you arrive. There’s not that much in the way of resources, and it’s a big desert. You don’t want to get stuck!)

Thriving cultural and educational opportunities await at these desert oases.

Wild animals, a historic opera house, and much more await your visit in the desolate flats of the desert wilderness.

How to Get to
Death Valley National Park

Death Valley is located in southeastern California, directly adjacent to the Nevada border. The park is bisected by, and best explored via, California Highway 190, along which lie most of the resort towns offering visitor services.

For full details on how to approach the park from any direction by motor vehicle, visit the park’s direction page here. You may also choose to fly into the area; the closest major airports are at Las Vegas and Los Angeles, though there are also small airfields at Furnace Creek and Stovepipe Wells for those with private aircraft.

Whether you fly in and rent or drive from your hometown, an RV is the ideal way to experience this inhospitable landscape. Just imagine the juxtaposition of your own private, cozy home away from home in the middle of the desolate desert -- a comfort you’ll be especially in need of after a long day of exploring the area.

If you don’t already own a motorhome or travel trailer, you can peruse the RV rental listings on RVshare. Keep in mind that RV travel in Death Valley can be hazardous to sensitive vehicle systems during the hottest portion of the year, and some renters may create restrictions against traveling in this zone for that reason.

There is a fee to enter death valley; you can rest assured that your funds go to maintaining and improving the park’s interpretive and offerings and facilities. The following visitor fees are current per September 2018, and each is valid for seven consecutive days of park entry:

As stark as it seems on the surface, Death Valley is bursting with opportunity for adventure -- and we can’t wait to learn more about yours! Tag us in your social media posts or email photos and details to us directly at [email protected] for the chance to have your epic trip’s tale shared on our blog or social media channels.

What is the best time of year to visit Death Valley National Park?

Spring is the best time of year to visit Death Valley National Park. Temperatures in the park are warm, but don't hit the scorching heat of summer. In the spring after a rainy winter, desert wildflowers bloom and make a beautiful landscape.

Death Valley National Park is 5,270 mi square miles, or 3,422,024 acres. This makes it the largest national park outside of Alaska. 93% of the park is officially designated wilderness, and the terrain ranges from salt flats to mountains with snow to sand dunes to oases.

What are the top things to do in Death Valley National Park?

Top things to do at Death Valley National Park include a visit to Badwater Basin, the lowest point in the Western hemisphere at 277 feet below sea level. Take Artist's Drive to see Artist's Palette and marvel at the multi-colored rocks. Also, check out the Racetrack, the sand dunes near Stovepipe Wells, and Ubehebe Crater among other sights.

Yes, pets are allowed at Death Valley National Park but there are limits to where they can be. Pets can be on roads, in campgrounds, in picnic areas, and in other developed areas of the park. They are not allowed on trails. Death Valley can get extremely hot and pets can not be left unattended in cars for their own safety.

Are there designated camping spots in Death Valley National Park?

Yes, there are designated camping spots at Death Valley National Park. Both Furnace Creek and Stovepipe Wells have RV hookup sites available, although they book up quickly. RVs under 25 feet long can camp at Mahogany Flats, Thorndike, and Wildrose Campgrounds. Some campgrounds are only open from fall to late spring and close during the extreme heat of summer.