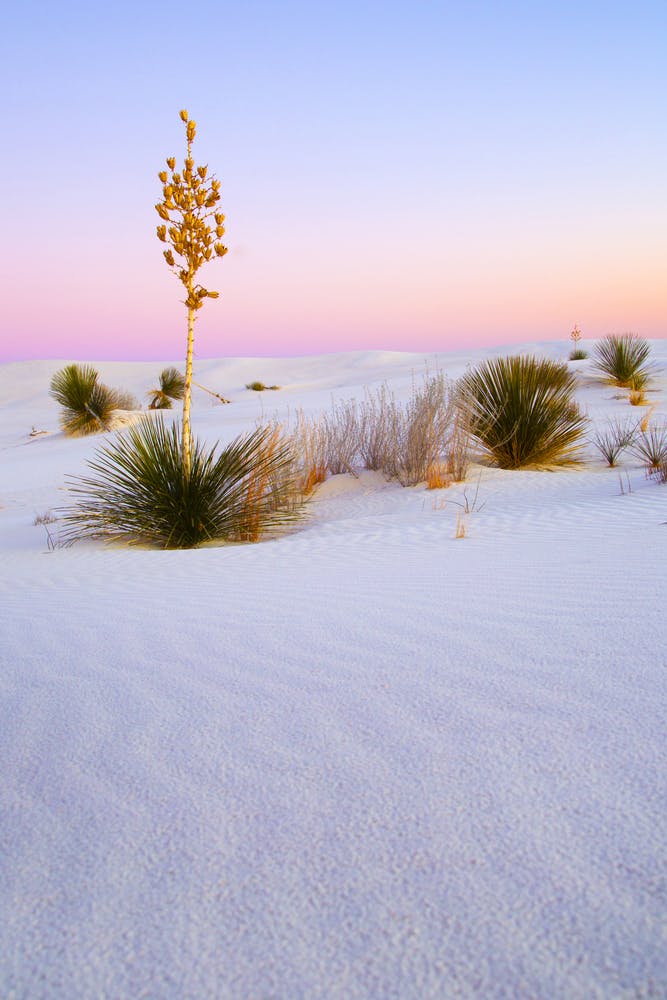 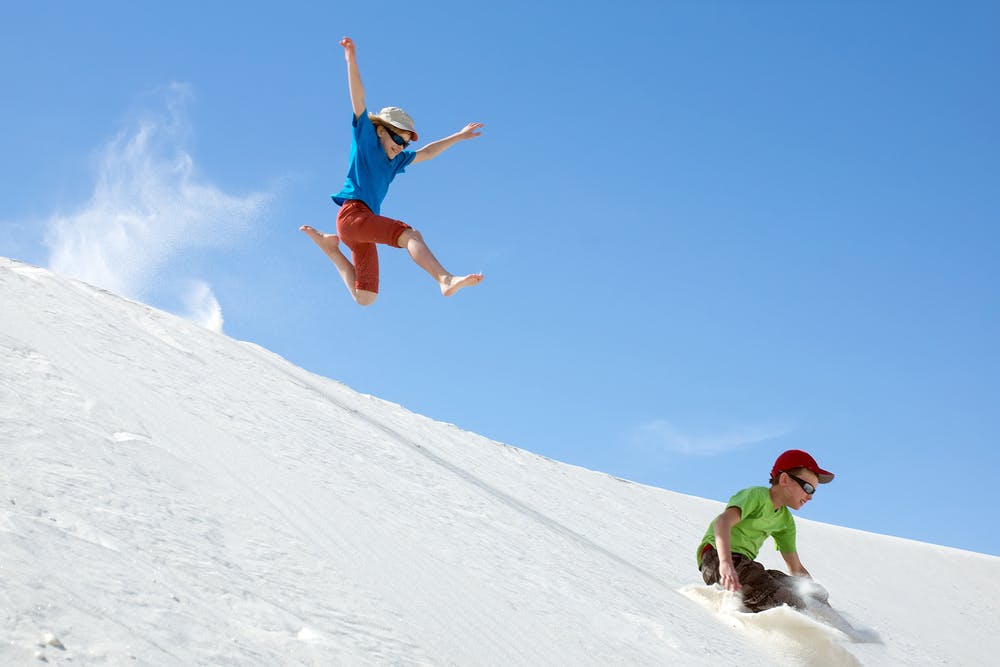 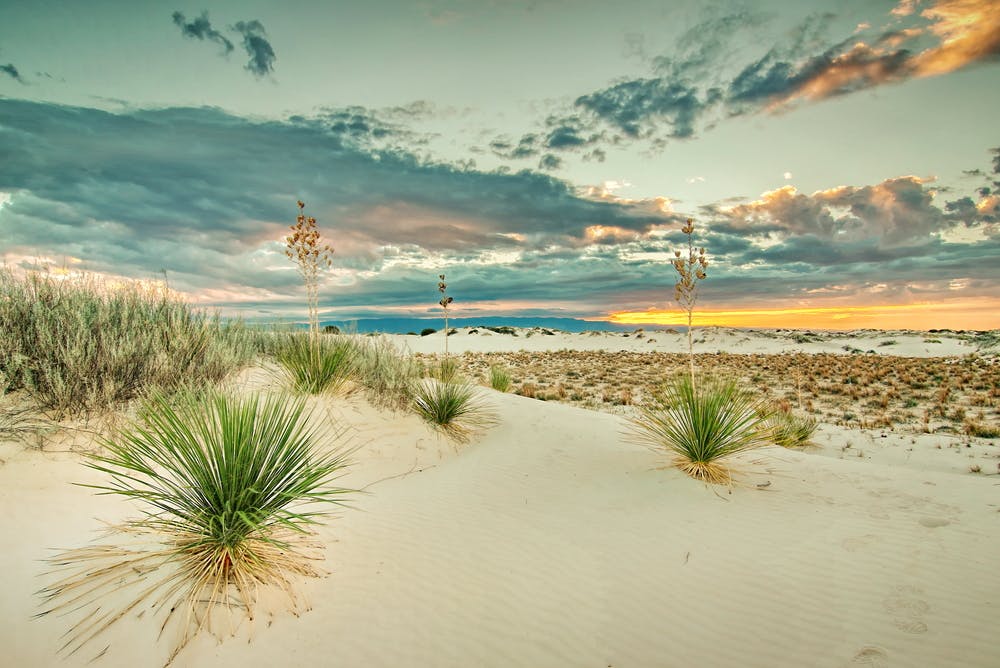 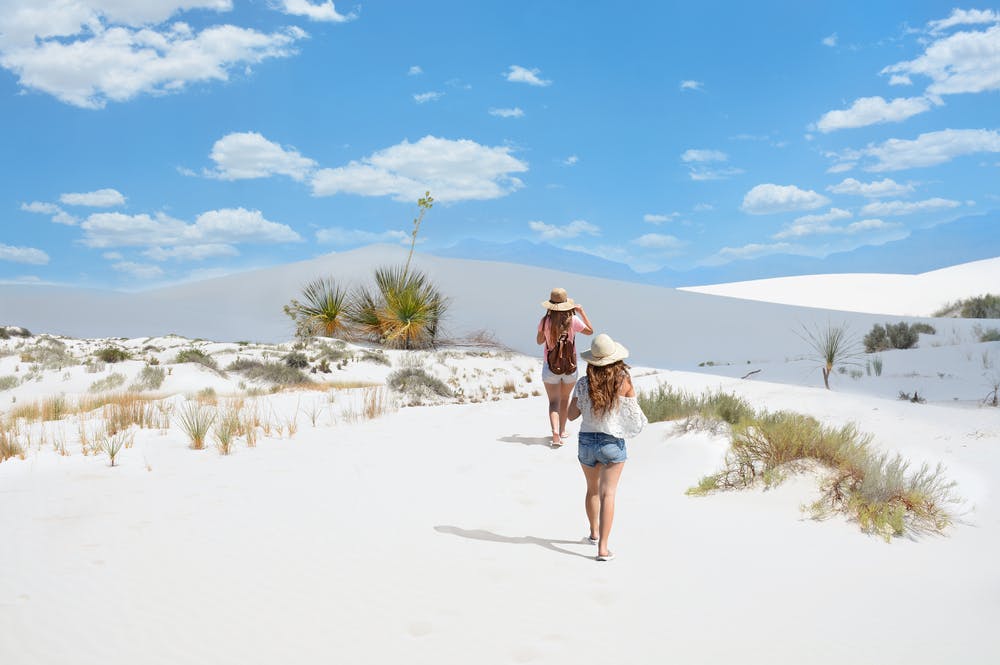 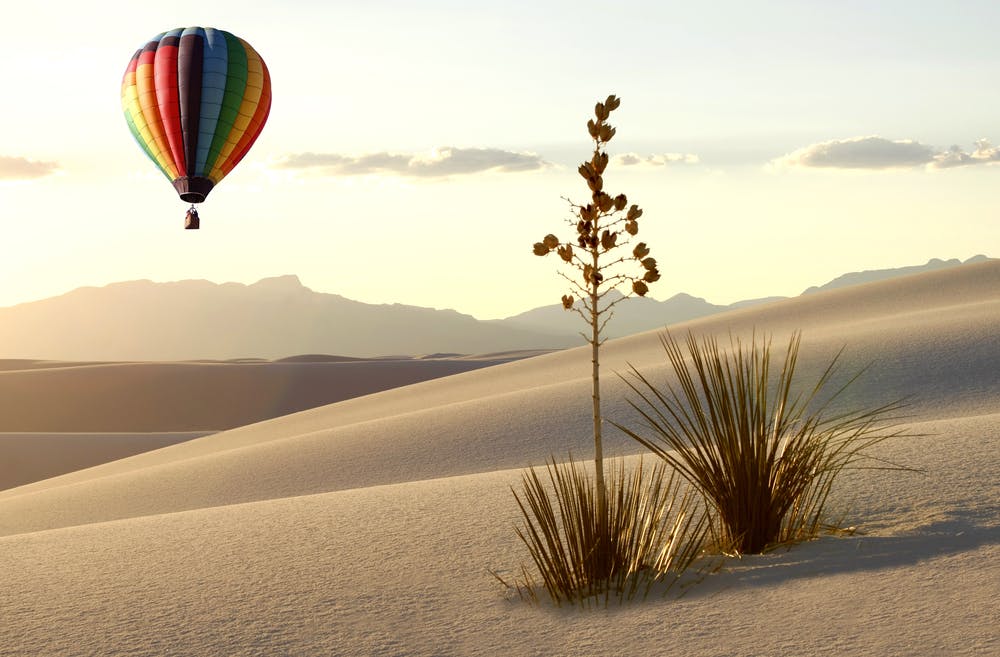 A long-standing national monument, White Sands National Park had its designation upgraded in December of 2019 — and for good reason. This surreal field of gypsum sand dunes, tucked into the south-central portion of New Mexico, has dazzled visitors for decades. Along with its stunning beauty, it also has a fascinating historical and cultural context: surrounded by military installments, this part of the country is often used to test defensive technologies such as missiles, lending it an even more otherworldly, and perhaps even eerie, quality.

That said, White Sands is a cheerful place as well; families gather to sled down the dunes, and adventurers take to the sands for hiking, horseback riding, and just taking it all in. The national park is located in a relatively remote stretch of the southwestern desert, and the closest New Mexican communities are La Luz, Alamogordo, and Las Cruces.

As far as landscape characteristics, White Sands is known for — you guessed it — its white gypsum sand dunes, which, covering 275 square miles of the desert, is the largest such gypsum dune field of its kind. The park is also home to a variety of plant and animal life, including roadrunners, coyotes, bobcats, and more than 600 species of invertebrates. It’s also been the site of fossilized footprint findings, by which scientists have learned about a variety of its ancient citizens, like dire wolves, mammoths, and saber-toothed cats. Given its southern desert location, it’s no surprise to most visitors that White Sands can get extremely hot during the summer months, with temperatures frequently nearing (or reaching) the triple digits; the sub-freezing winter nights are often more surprising.

While there is no RV parking or camping inside White Sands National Park, the park does offer some backcountry camping options for those looking for a rugged, wilderness experience.

That said, if you’re looking for a quick upgrade to your road trip, it’s hard to beat an RV for style! You’ll be able to enjoy all the freedom and flexibility of the road while knowing exactly where you’ll lay your head each night, and even make your own meals if you want to! Check out the RVshare rental listings available in your area today.

What to Do at
White Sands National Park

Although it would be easy to spend an entire weekend — or even an entire lifetime — getting lost in the majesty of the dunes, every adventurer needs to stop for a meal now and again, and nearby missile tests mean that sometimes the park won’t be accessible. Fortunately, there’s plenty more to see and do nearby; here are just a few ideas.

If you don’t have Mexican food while you’re in New Mexico, well… you just haven’t really made the trip. CJ’s Si Señor Restaurant is a beloved local favorite dishing up all the classics; do yourself a favor and ask for it “Christmas style” when they ask if you want red or green chile.

If you’re looking for a hearty treat to fill you up after a long day’s adventuring, Rockin’ BZ Burgers has got you covered. Their fresh, never-frozen ground chuck patties are served up hot and styled exactly as you like ‘em, accompanied by fries, drinks, and even chicken wings if you choose.

Southern New Mexico isn’t exactly the deep south, but you can still enjoy some authentic barbecue while you’re in town. With affordable combos to fill you up and ensure you get a taste of all of their delicious recipes, Can’t Stop Smokin’ BBQ is a can’t-miss Alamogordo hit.

Forgot something imperative — or just need a souvenir? Here are some shopping options in the White Sands National Park area.

Location: Inside the park

One of the best parts of any national park visit is how much you get to learn! Here are some other places in the area where a visit might teach you a thing or two.

It may be a desert, but it’s brimming with things to see and do! Here are some other sites to consider adding to your itinerary while you’re in the White Sands area.

How to Get to
White Sands National Park

White Sands National Park is located just to the east of Las Cruces, New Mexico, and is accessible from that city via U.S. Route 70. It’s about midway between Las Cruces and Alamogordo along that road. You can find directions to the national park by using your onboard GPS or smartphone navigational app, and there are also directions written out on the NPS website. The nearest large, American airport is in the city of El Paso, about an hour and a half away.

To enter the park, you will be expected to pay a gate fee, as is the case at the majority of NPS-managed reserves and wildernesses. While a current fee schedule can be found here, the per-vehicle price at White Sands National Park is $20 at the time of this writing, and that fee gets a standard-sized vehicle and all passengers access to the park for up to seven consecutive days. Annual passes to the park are also available for $40, and the America the Beautiful Pass gets you into all NPS-managed sites for a year for $80. Check with the gate agent for full details on the passes and programs available to you.

Whether it’s White Sands or another of our nation’s beautiful landscapes that have caught your eye, there’s no better way to see the countryside than in an RVshare RV rental. Our fleet of vehicles is offered by a network of trusted renter-owners and come in every shape, size, and footprint imaginable, giving you a one-of-a-kind opportunity to experience the authentic #RVlife.

And by the way, we’re eager to participate in your experience, too! Send photos and details of your trip to us directly at [email protected], or tag us in your social media posts. We may just select your trip to highlight on our own social media channel or blog!