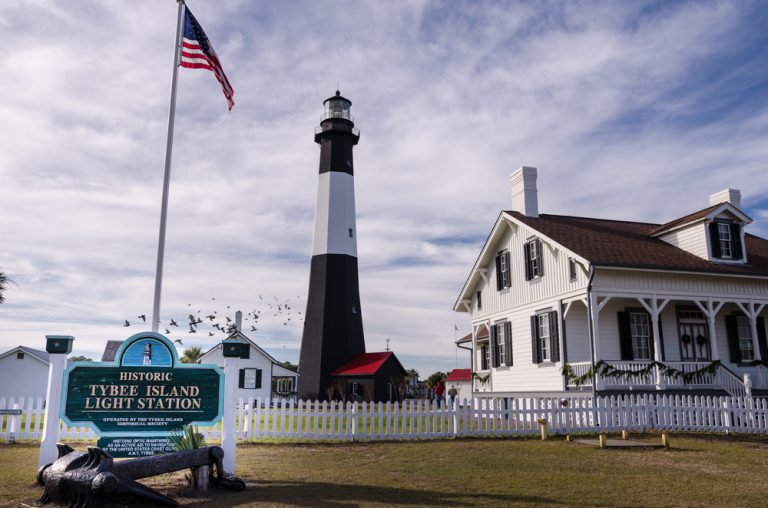 As one of the first 13 colonies and home to some of the longest-running European settlements in America, it’s no surprise that Georgia has plenty of incredible historical landmarks and famous buildings among its many towns… not to mention contemporary tourist destinations that are well worth adding to your itinerary. Georgia is also blessed with some beautiful natural landmarks and geological wonders that make for beautiful stops along your southern vacation route. Here are the top landmarks not to miss in the state of Georgia!

What are Some Famous Landmarks in Georgia?

Let’s dive into these Georgia landmarks!

Tucked away on St. Simons Island, Fort Frederica National Monument protects and preserves a historic fort that was first erected in 1736 by James Oglethorpe, who was hoping to protect his colony from the Spanish settlers in Florida, who threatened to overtake it. A military outpost and town sprung up around this fort, which was named after Frederick Louis, the Prince of Wales (1702-1754). Today, the remains of the fort can be visited and toured by guests, and the surrounding green space also hosts a network of hiking trails. The south is known for its insect activity and ticks in particular, however, so be sure to guard yourself.

Things to do near Fort Frederica National Monument: St. Simons Island is known for its beautiful seascapes and scenic towns that combine southern hospitality with oceanside casual cool. Be sure to stop by the St. Simons Lighthouse and enjoy some seafood during your stay. Here are some local RVshare rentals to consider.

Tybee Island has long served as a vacation destination for those in Savannah and beyond, and the Tybee Island Light Station and Museum is well worth visiting if you make the trek. The oldest and tallest lighthouse in the state of Georgia, this beacon was originally constructed and opened back in the 1730s, and is one of only seven surviving lighthouses that date back to the colonial era. Admission grants you access not only to the lighthouse itself (and the incredible viewpoint at the top), but also a local museum and example of a raised cottage.

Things to do near the Tybee Island Light: The Tybee Beach Pier is an incredible place to catch a sunrise or cast a line to catch dinner. Nearby wildernesses like Skidaway Island State Park offer a great place to camp. Here are some RVshare rentals in the area.

Savannah is, of course, chock full of history; we could easily create a list of landmarks to see in this city alone. However, the literary among our readers won’t want to miss the opportunity to see Flannery O’Connor’s Childhood Home, where the famed Southern Gothic writer grew up and got her artistic start. Among the other artifacts on display, visitors will see some of young Flannery’s authentic childhood books, into which she predictably penned notes and early book reviews. (One reads: “Not a very good book.”) Dedicated to preserving the O’Connor home and also promoting and supporting contemporary authors, the space is also regularly used for readings and other literary events.

Things to do near the Flannery O’Connor Childhood Home: What isn’t there to see and do in Savannah? Wander through this town’s historic squares and take it all in, being sure to spend ample time under the Spanish moss in Forsyth Park. Here are some local RVshare rentals and campgrounds to consider for your journey.

Nestled in what can only be called the middle of nowhere, about an hour northeast of Athens close to the South Carolina border, Georgia offers its own version of Stonehenge: the Georgia Guidestones, a unique monument and U.S. landmark erected in 1980 by a man using the pseudonym R. C. Christian. These five imposing granite slabs are inscribed with a a set of ten guidelines that have been translated into eight modern languages, including directives like “Balance personal rights with social duties” and “Protect people and nations with fair laws and just courts.” Additionally, there is a shorter message inscribed at the top of the monument in four ancient language scripts. No matter how little or much of it you can read — or to what degree you agree with what it says — it certainly makes for a dynamic photo opp.

Things to do near the Georgia Guidestones: Located in an unpopulated part of Elbert County, the Georgia Guidestones aren’t immediately adjacent to any other major tourist attractions… but the town of Athens has plenty of shops, restaurants, museums and to-dos to consider. Watson Mill Bridge State Park is also within an easy drive; here are some RVshare rentals in the area to consider.

From topside, this is an unassuming part of Lumpkin County, Georgia, located just next to a Walmart Supercenter in Dahlonega. But for those willing to take a closer look — one that ventures underground, in fact — Consolidated Gold Mine offers a whole new world of adventure. The largest hard-rock gold mine east of the Mississippi River, the Consolidated mine was founded in 1896, when miners focused on extracting gold from the quartz crystal that contained it. Tours will take visitors 200 feet underground and well over a century back in time to learn more about what life was like for the brave folks who came here in search of fortune.

Things to do near Consolidated Gold Mine: Approximately an hour northeast of Atlanta, Dahlonega is a relatively small town with all the basics and plenty of eateries to choose from. However, this area is also immediately south of the Chattahoochee National Forest and nearby to many state parks offering campsites, including Vogel State Park, Smithgall Woods State Park and other wildernesses. Here are some RV rentals in the area worth browsing!

With more than 10 million gallons of fresh and saltwater habitats housing thousands of animals, the Georgia Aquarium long held the distinction of being the largest aquarium in the world — though it has now been outpaced by locations in China and Singapore. Exhibits allow visitors to get familiar with animals who inhabit cold, deep waters as well as large marine mammals like beluga whales and others, and is the only institution outside of Asia that houses the gigantic whale shark species.

Things to do near the Georgia Aquarium: Atlanta is absolutely brimming with things to see and do, and plenty of incredible, comforting southern food to eat. One way to see it all and take in some air: walk the beltline, which was once a railway corridor and today hosts pedestrians and joggers. Here are the best RV rentals and campgrounds in the area.

If you need a bit of a break from the hustle and bustle of urban Atlanta, the Atlanta Botanical Garden has you back. A stunning facility encompassing 30 acres of both outdoor and enclosed gardens, this spot is well-known for its sprawling collection of orchids, as well as its sparkling winter light display and other yearly events. Originally incorporated in 1976, the garden has been a local landmark for decades, and continues to inspire conservation efforts as well as simply delighting visitors with its beauty.

Things to do near Atlanta Botanical Garden: There are even more beautiful plant-filled spaces near Atlanta to explore. Check out Sweetwater Creek State Park for some fabulous day-hiking opportunities, and also see these RVshare rentals and campgrounds in the greater Atlanta area.

Another just-outside-of-Atlanta landmark and attraction, Stone Mountain is actually a city unto itself — and also the gateway to Stone Mountain Park, which contains the famous quartz monzonite dome monadnock into which a depiction of Jefferson Davis, Robert E. Lee, and Stonewall Jackson has been carved. Although commemorating an undeniably dark time in U.S. history, this landmark is the largest bas-relief sculpture in the world and is also a great place to enjoy a beautiful hike in the unique landscape of the northwestern Georgia foothills.

Things to do near Stone Mountain: A short drive brings you back to Atlanta and all its to-dos, or you could meander the town of Stone Mountain itself for a change of place. Here are some great RVshare rentals and campgrounds nearby.

One thing’s for certain: you’re unlikely to get through north Georgia without knowing about Rock City, which is famously advertised on a variety of billboards, building tops, and other unlikely spaces as you approach. This unique garden and exhibit has been built onto and into the famous rock formations that characterize the Georgia/Tennessee line, and from the top of Rock City, a viewpoint allows visitors to see seven states at once. Those with a taste for fantasy will enjoy Fairyland Caverns and Mother Goose Village, and shopping and dining are also available on the property.

Things to do near Rock City: Closer to the town of Chattanooga than any major city in Georgia, Rock City is a great destination to add onto your southern road rip. Nearby Ruby Falls is unique for its underground location, and the foothills and forests in general are stunning. Here are some RVshare rentals in the area.

Technically the town Rock City is located in, Lookout Mountain is worth exploring in its own right: the site of an important Civil War battle fought in 1863, this town offers several historical landmarks worth visiting, such as Point Park and Cravens House. It’s also just a small-town southern community with plenty of shops, restaurants, and sights worth experiencing and seeing.

Things to do near Lookout Mountain: Be sure to venture across state lines into Chattanooga for a bigger-city feel that still has southern hospitality to offer in droves. Here are the best RVshare rentals in the area to consider.

Planning an RV Trip to Georgia

Georgia is chock full of incredible landmarks to discover, and we’ve got you covered on the planning front. An RV trip is the perfect way to see it all, so here’s the info you need!

We’ve listed the best RV campgrounds in the state of Georgia and also written guides to the best state parks the Peach State has to offer. Plus, of course, we’ve got the RV rentals themselves for you to peruse.

Georgia is a wonderful state and a fantastic place to…

When you first think of Georgia, you may sooner think…

Georgia enjoys a varied climate and terrain. North Georgia is…