About as far north as you can go in the Pacific Northwest without venturing into Canada, North Cascades National Park is truly an otherworldly vista: glaciated peaks, azure alpine lakes, waving fields of wildflowers and dense forests make up this wonderland of a wilderness.

Despite its truly epic landscape, North Cascades is currently one of the least visited national parks in the American register, with annual visitorship capping out around 30,000-40,000 people per year. That may be due in part to its relatively short season; those mountains can be hard to access during the colder parts of the year, and although the park is only three hours or so from Seattle, there are so many other places to go and things to see in the area. But those who are perserverent enough to make it out to North Cascades are met with an utterly unforgettable experience — and one that’s been part of the human story and imagination for far longer than westerners could know.

The land today known as North Cascades National Park is the traditional and ancestral home of the Upper Skagit, Sauk Suiattle, Nlaka’pamux, and Okanagan people. These Indigenous tribes stewarded and cared for the land for centuries before white settlers ever arrived, securing its safety for our experience and enjoyment today. 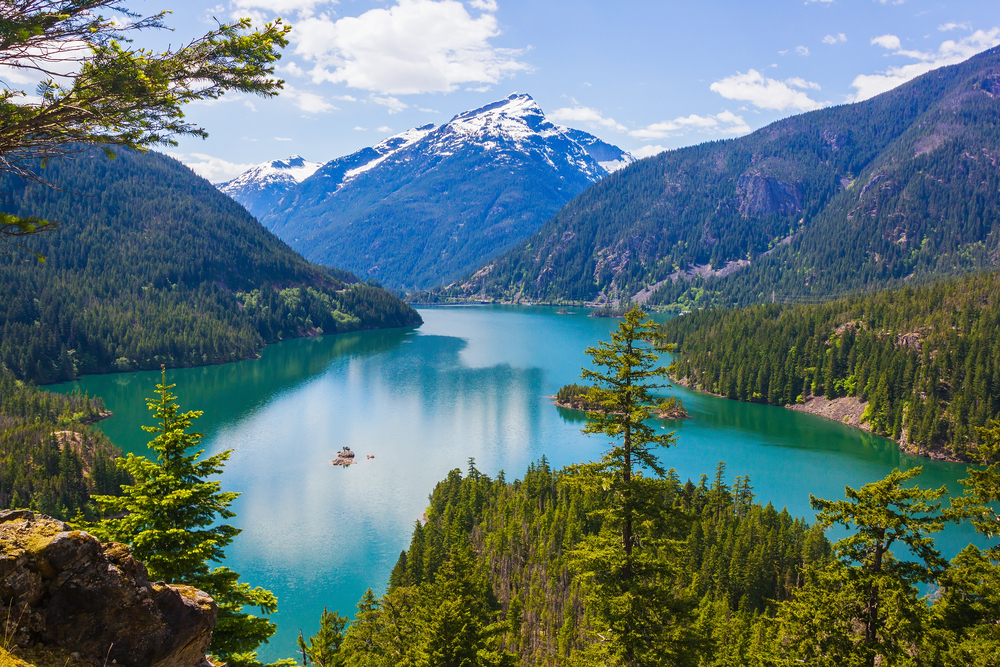 Because the North Cascades are such a rugged territory, Native peoples didn’t live in the mountains themselves. Rather, they gathered into communities to the east (Columbia River Basin tribes) and west (Puget Lowlands tribes) of this mountain pass, which served as a trade route between the two groups.

The traders were cunning, learning to follow ridge crests that would help them avoid the densest and most impassable foliage while also staying clear of dangers and obstacles like avalanches. Cascade Pass, the main route through the mountains, was known to the Lake Chelan and Upper Skagit groups of Native Americans as Stehekin, which translates to “the way through.” While most of the trading was done during the relatively mild summer and fall months, some of these groups were skilled enough survivalists to make the journey in the winter — no small feat, especially without the benefit of modern technology and manufactured winter gear.

The lifestyles of these groups in their home communities were intricately tied to the lands around them. These tribes followed a hunter/gatherer lifestyle, subsisting off local game meat and edible plants, using natural materials for everything from food and medicine to clothing and housing. Tribes would travel seasonally to follow the best sources of food and other necessary resources, and all parts of the natural environment, from plants and trees to animals and mountains, had their own meaningful names and were respected as important and agential spirits. The people truly lived in concert with the land in a kind of symbiotic dynamic, rather than using up resources relentlessly and without intention.

Learning more about the Indigenous histories that undergird our current experience of these wild landscapes we try in vain to label with names and boundaries. Along with reading write-ups like this one (thank you, by the way), you can also check out the information available from the National Park Service itself — or whatever bureau or organization oversees the wilderness you’re visiting. And don’t forget, cities are built on Native American landscapes, too; no matter where you are in America (or beyond), the free online service Native Land can help you learn more about whose ancestral stomping grounds you’re standing on, offering additional resources and links so you can take the time to fully educate yourself.

Still, while self-education is a great first step, it’s just that: a first step. To truly pay respect to both the land itself and the people who have taken care of it for so many years, we must take up for ourselves the mantle of stewardship they’ve so aptly demonstrated for us. As visitors rather than residents, stewardship looks a little bit different, but it’s not hard to do — and if you’re looking for an easy-to-reference, codified way to ensure you’re traveling with as little impact as possible, we recommend studying the seven Leave No Trace principles. Here they are, in short:

You can get fuller details at the Leave No Trace website, or by speaking with a park ranger once you arrive.

We hope this Indigenous history offers added context and nuance to your North Cascades National Park visit. Have fun!