With its jaw-dropping, once-in-a-lifetime landscape — endless red-orange hoodoos stacked up against the brilliant blue sky — Bryce Canyon National Park draws some 1.5 million visitors each year. While that’s less than some of the other Utah national parks, like Zion and Arches, it’s still a significant number of people moving through this alien landscape, and few of them know the rich and longstanding history undergirding this sacred place.

What is today known as Bryce Canyon National Park is the ancestral grounds of the Ute, Southern Paiute, and Pueblo peoples, and figured in the migrational patterns of other Indigenous bands like the Hopi. As you walk amidst these towering rock formations, we hope you’ll look back as well as up to appreciate the long line of history this place is steeped in. 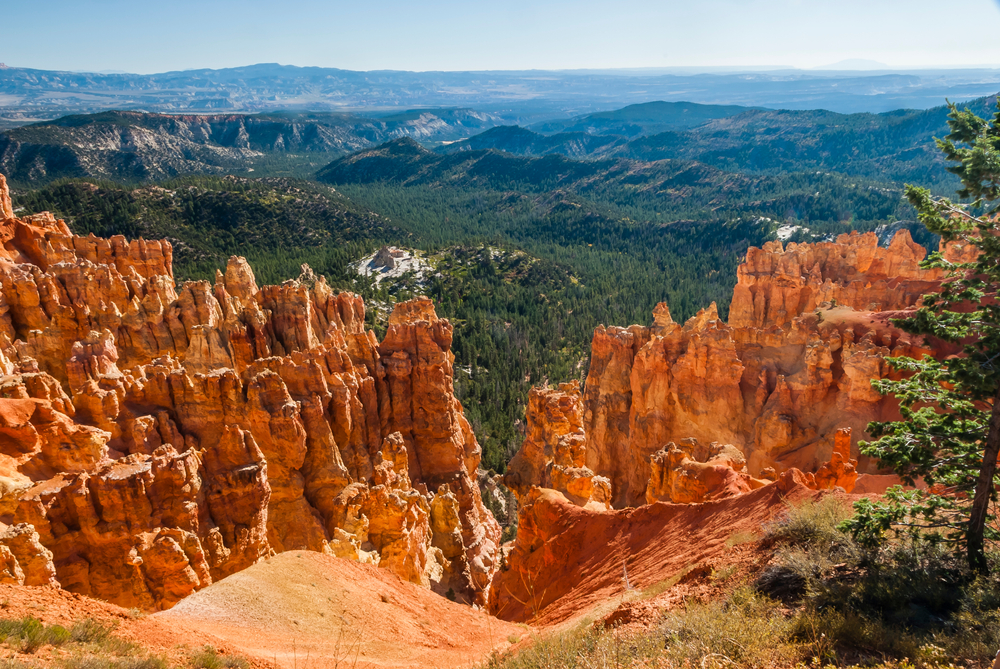 According to some Native Americans, there was a place in these lands referred to as Sikyaatutukwi, meaning the place of yellow points. One look at the iconic skyline of Bryce Canyon confirms that this could only be what is today known as Bryce Canyon.

Archeologists surmise that Native Americans first occupied the Colorado Plateau some 12,000 years ago, with specific evidence of Fremont and Anasazi at the beginning of the Common Era.

Evidence also shows that the Paiute people gathered and hunted on the Paunsaugunt Plateau almost a thousand years ago, around the year 1200 CE. Although there are no remains of permanent settlements, the Paiutes and other southwestern Natives likely used these areas as part of their hunting and gathering traditions, which allowed them to sustain themselves off the land.

These indigenous people lived by the seasons, watching, for example, for the rabbit brush to turn yellow in the fall — which indicated that the pine nuts were ready for harvesting. Like many other Native American peoples, the Paiutes had a reciprocal relationship with the land, and they paid their respect to it: when gathering local plants for food or medicine, they’d ask permission first, and return the favor with loving, sustainable care and stewardship for the land that nourished, clothed, and fed them.

One Paiute elder related a legend about Bryce Canyon that you can read in full at the NPS website — we won’t do it justice without his voice, but suffice to say those rock formations might not be exactly what you thought they were when you first saw them!

Archeologists and the public in general still have much to learn about the Indigenous histories of these places we flock to and enjoy today, both from found evidence and the testimony of the remaining Native American elders. The Paiute people are still around today, descended from those long-ago hunters and gatherers, and recognized by the federal government. With their rightful, historic dwelling and hunting places taken from them, they have been forced to live on reservations that often lack the resources and history of their ancestral lands.

As a visitor to Bryce Canyon National Park — or any wilderness or city in America — you can always find ways to learn more about the unique history that is hidden amongst the beautiful scenery and one-of-a-kind geological formations you’re enjoying. Reading histories like this one, or watching the film available about Bryce Canyon from the official National Park Service website, is one good step in the right direction. You can also check whose land you’re standing on in many places around the world using the website Native Land.

Most of us contemporary visitors don’t have the same kind of intimate, reciprocal relationship with the lands around us as these Indigenous peoples wisely cultivated. But there are significant steps you can take toward reducing your overall impact and ensuring the health and vitality of these landscapes for future generations — and for the existing descendents of the tribes that long occupied them.

Leave No Trace has some excellent information about how to move across the land softly, including these seven important tenets, whose full descriptions you can read more about here:

Thank you for taking this opportunity to learn more about the Indigenous history of Bryce Canyon National Park. We hope it adds some much-needed context to an already awe-inspiring experience.