Home to, among many other fascinating geological features, Delicate Arch — which is the graceful sandstone bridge you see adorning the Utah license plate — Arches National Park is easily one of the most famous and popular destinations in the southwestern U.S., if not the world. These towering and gravity-defying red rock formations create a stunning backdrop against the endless blue desert skies.

In fact, Arches draws a whopping 1.5 million visitors each year, most of whom come during the peak season between March and October, causing long lineups at the entryway and congested parking lots and trails. It’s certainly understandable — this is one of the most beautiful landscapes in the world. But there was a time before this part of the world was considered a park at all, when it drew a different sort of visitor. 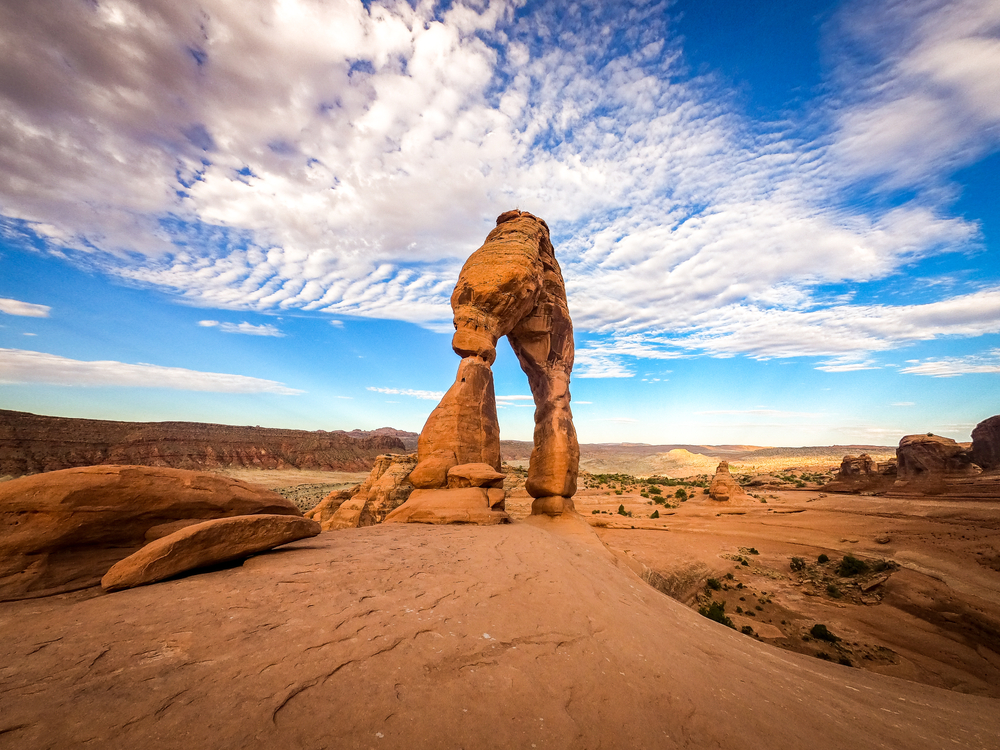 Although there is little evidence of permanent Native American dwellings at Arches, archeologists have ascertained that Indigenous peoples traveled to this land long, long ago — about 10,000 years ago, to be exact. Hunter-gatherers arrived at the end of an Ice Age known to scientists today as the Last Glacial Period. When they got here, they discovered the land was rich in two special forms of microcrystalline quartz, chert and chalcedony, which were materials well-suited to crafting knives, arrowheads, and other edged stone tools, some of which they probably used to hunt local fauna. Although there aren’t ancient dwellings in Arches itself, there are many such remains in the larger region (such as Mesa Verde National Park and Bandelier National Monument). And Arches is home to fascinating petroglyphs and debris piles, the living testimony to a brave and resilient people who traveled these lands, among others.

About two millennia ago, some of these nomadic peoples began to settle in the southwest, particularly the area known today as the Four Corners region (where Utah, Arizona, New Mexico, and Colorado meet). These people, known as a group as Pueblo Indians, were the forerunners of farming and agriculture as we know them today, seeding the land with corn, beans, and squash so they could sustain themselves without constantly being on the move. This era lasted in these parts for about 500 to 1300 years before such farming communities began to disappear, in part due to climate changes. Then, about 700 years ago, the Pueblo people began to migrate away from the region, for reasons including colonization.

Today, many modern-day Native Americans who are descended from these ancients still live, work, and worship in the American southwest. Some modern-day Pueblos in Utah, New Mexico and other southwestern states include Acoma, Cochiti, Santa Clara, Taos, and the Hopi Mesas.

Additionally, nomadic Shoshonean tribes including Ute and Paiute people could still be found stewarding and hunting on this land when the European settlers began to make their way into what is now known as Arches National Park. (The Ute people are where Utah gets its name from.) Some petroglyphs in the park depict horseback riders, proving that there was interface between the Spanish settlers and these native Americans, who only used domesticated horses after seeing the Spanish do so.

When visiting Arches National Park — or any preserved public lands — it’s important to bear in mind the long-term historical and cultural history and significance of the landscape. The stunning desert today known as Arches served as a hunting grounds for Indigenous peoples for thousands of years, and they were able to work with the land to supply themselves with everything they needed from tools to fuel to food.

A great first step toward paying respect for this legacy is educating yourself about the Native American and Indigenous peoples who were here first, which you can do by reading posts like this one. Additionally, Native Land is a great resource to find out whose occupied lands you’re standing on, whether they’re public or privately owned, and includes information for all of North and South America and Australia, as well as significant chunks of Europe and Asia.

Keep in mind, too, that Indigenous peoples have long not only enjoyed the fruits of this land’s labor, but also stewarded and cared for it — a tradition that you can continue during your visit. Make note of and practice Leave No Trace principles, such as packing out all the trash you pack in and being sure to only start campfires in designated sites that are unlikely to lead to uncontrolled burns. Respecting wildlife and leaving what you find are also important LNT tenets, so remember to keep your distance from any critters you might spot and take only what souvenirs you can keep in your camera!

Finally, enjoy this stunning landscape that has drawn human beings into its dramatic red stone vistas since time immemorial. When you visit Arches National Park, you’re truly participating in an ancient human ritual — so be sure to slow down and fully take in every moment.