Acadia National Park protects one of the most unique landscapes in not only the northeastern United States, but the world. Situated on a coastal island characterized by granite peaks, dense forests, rocky shorelines and crashing waves, Acadia is a dynamic, rugged, and endlessly beautiful terrain. It’s no surprise that more than two million visitors on average flock to it annually.

But long before Acadia National Park was under federal management — long before the word America was first uttered — Native Americans called its steep cliffs and rambunctious waters home. What follows is just a little bit of their history. 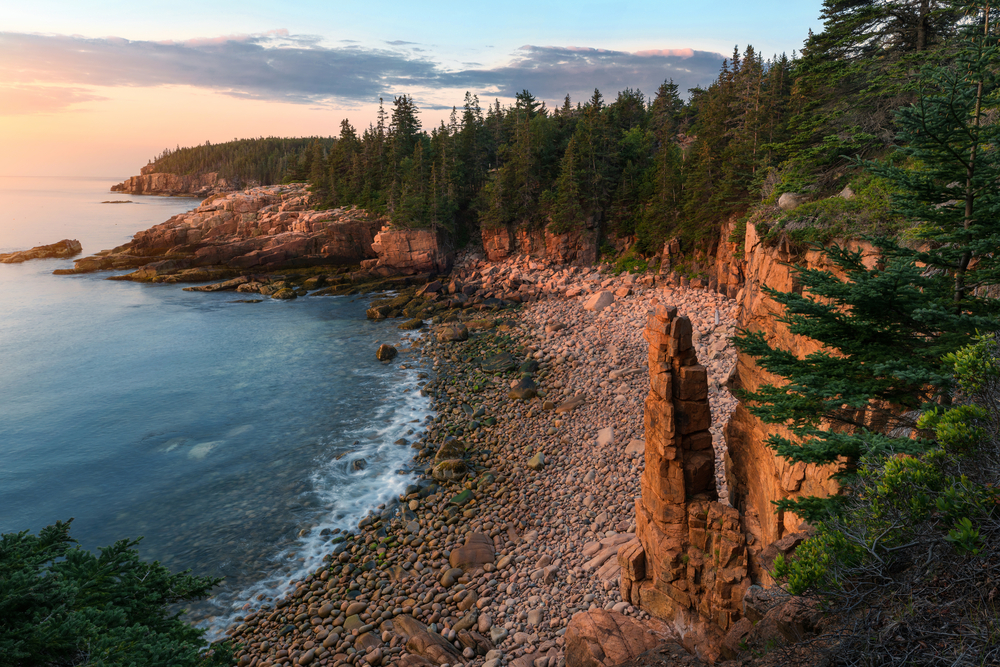 Acadia National Park encompasses about 47,000 acres of countryside, much of which is on what is known by westerners as Mount Desert Island. But the Native Americans who’ve inhabited these lands for more than 12,000 years knew the place as Petemic, which means “range of mountains.” (The name “Acadia” was given to the land by white settlers, who likely were reminded of the Greek region of Arcadia due to similarities in the landscape.)

Historically, these lands were inhabited by four distinct Indigenous tribes: the Maliseet, the Micmac, the Passamaquoddy and the Penobscot. Today, all of these tribes are known collectively as the Wabanaki, which translates to “People of the Dawnland.”

Historically, the Wabanaki people traveled to Petemic from the Maine mainland and other parts of what are today the northeastern United States in birchbark canoes they hand-crafted. Once on the island, they hunted, fished, clammed, gathered berries, and traded with other Wabanaki. As white settlers and wealthy tourists began to populate the land in the 19th century, the Wabanaki would come to the island to sell hand-crafted baskets to these foreigners, and would harvest sweetgrass and other materials for future crafting. They even offered canoe tours of the waters and smaller islands surrounding the Mount Desert Island mainland, and allowed settlers and visitors to watch traditional dance performances during the summer months.

Today, these tribes are still active on the land, still harvesting sweetgrass and crafting beautiful baskets and other traditional crafts. The people of the Wabanaki Confederacy have been relegated to a series of reservations in some of the most remote and economically challenged counties in the state. When visiting Acadia National Park, it’s important to understand the broader historical and cultural context of colonization and displacement. Educating yourself about the land’s pre-colonial history is one way to move toward a more equitable experience of it.

As a visitor to these storied lands, there are many ways you can maintain a respectful demeanor and pay tribute to the sanctity of the landscape and the people who have long been its stewards. Reading this post and the information available at the NPS website are great starts!

You can also use Native Land to educate yourself about the Indigenous peoples who inhabited and cared for the land long before white folks and settlers ever stepped foot on it — and that’s true of Acadia National Park as well as any other national park or privately-owned land in North America, South America, Australia, and certain parts of Europe and Asia.

Thank you for taking time to educate yourself about the history of Acadia National Park; we hope you enjoy your visit!