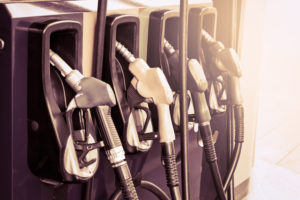 Considering hitting the road for some serious adventures?

Planning to take on the highway in an RV can be overwhelming at first. There’s a lot to think about. What kind of rig do you need? Who will be going with you? What’s going to happen with all the stuff you’ll leave at home — do you have pets to consider?

And, most excitingly, where in the world will you be going? What will you do when you get there?

Unfortunately, monetary issues quickly become part of the increasingly complex equation. Even cheap travel comes at a cost, and in an RV, there are quite a few expenses to factor into your budget. Although you’ll save money on airfare and restaurant meals, you’ll need to foot the bill for campground fees, groceries… and gas.

In fact, after the major cost of acquiring the vehicle itself, gas or diesel might just be the most expensive part of owning and operating a camper. Even the smallest RVs are large, heavy vehicles — it takes a lot of power to move all that weight down the road at speed!

That power has to come from somewhere. And since they’re still working out the kinks on those fairy-dust-powered RVs, right now, that “somewhere” is fossil fuel.

Gas isn’t as expensive as it once was. In fact, the United States has seen something of a renaissance of road tripping thanks to gas prices that have hovered under $3 per gallon on average for a couple of years now.

But when you start looking at the average mpg on your camper, you might not be feeling so blasé about pump prices.

Even small RVs usually get far less than 15 miles per gallon, even on the highway. And many large RVs like Class A motorhomes get as few as 6!

Furthermore, it’s not that cut and dried to do a simple RV mileage comparison. Although larger vehicles tend to draw more fuel than smaller ones, factors such as your RV’s age and what kind of terrain you’re driving on will play a serious part in how far you can hope to get on a single fill. (For example, driving in the mountains adds strain to your engine, which means your fuel efficiency will drop lower.)

Furthermore, if your RV is a towable vehicle, you’ll have to focus instead on the mileage rating of your truck or SUV — while keeping in mind that the fuel efficiency will be somewhat mitigated by the heavy load it’s hauling. And besides, tow-capable vehicles tend not to be the greenest monsters on the road in the first place!

Although a lot of factors go into your RV gas cost, it is possible to get a general sense of how much you might expect for a fill.

For a quick rule of thumb, estimate about 6-8 miles per gallon for very large SUVs like Class A motorhomes and fifth wheel trailers. For mid-sized rigs, like travel trailers and Class Cs, estimate between 10-13 miles per gallon. If you’re in one of the smallest RVs on the market, such as a pop-up trailer or sleeper van, you might estimate as high as 15 or 18 miles per gallon. You can also ask your RV dealer directly about the estimated mileage for a vehicle before you purchase it.

Then, you can use this figure along with your RV’s gas tank size to figure out about how much it’ll cost you to fill the tank — and how far you can get on that fill.

Once you know the basic cost of getting a certain distance away, you’ll have a better foundation from which to start planning feasible destinations. You’ll know how far you can afford to go, in other words!

You may be eyeing the pump prices and wondering, well, how many gallons does an RV hold, anyway?

Although the size of your RV’s gas tank will vary depending on the type, make, and model, even the largest tanks are usually less than 150 gallons — and those are only for the largest and most luxurious motorhomes. New RVs tend to have slightly larger gas tanks than older ones, so as to make your road trip more convenient and require less frequent fills.

So now that you’ve heard the bad news about average RV gas mileage, how can you work to mitigate the expense?

Luckily, there are a number of ways to save money on fueling your rig.

Secondly, carefully consider whether you want to purchase a gas or diesel RV. Diesel rigs sometimes tend to have better fuel efficiency, although the cost of the fuel itself might be slightly more expensive and harder to find.

Finally, keep gas mileage in mind whenever you’re traveling in an RV. That means, for example, no random road trips without a plan for where you’re going or how far you’ll have to drive to get there. Always run your prospective destinations through an RV gas mileage calculator in order to discover the real cost of getting to where you’re going. Then, you’ll be able to pick destinations wisely and save money on fuel — and have enough leftover to spend on campground fees, food, and fun when you get there!

Even though RVs aren’t the most gas-efficient method of travel, they’re still considered far greener than traditional trips that utilize airplanes and hotels. Plus, the flexibility and convenience of being able to take all your stuff with you and set your own itinerary and route is truly worth spending a little extra at the pump.