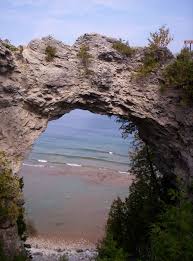 Mackinac Island: a destination for relaxation and romance. Steeped in history–it was the second to be decreed a national park–the three and a half square miles offer something for everyone. The trek to the island is as brief as an 18-minute, 8-mile journey by ferry, with the Star Lines being perhaps the fastest boat line serving the island.

With camping spots, as well as traditional hotels, unique rock formations, and biking trails, it is easily a national treasure, plus it’s fun for the whole family.

History of the Island

In 1671, Jesuit preacher, Jacques Marquette, attempted to convert the indigenous people of the Mackinac Straights. As a greater number of Europeans flocked to the area, they became aware of its many natural resources. It was not long after that, it became known for its abundant fur trade.

Then, in 1780, after the French and Indian War, English Major, Patrick Sinclair, discovered the site for his fort, among the island’s impenetrable bluffs. In 1815, after several battles and a couple of treaties, the U.S. gained control of Mackinac, in Michigan. Soon after, the island became the hub of John Jacob Astor’s famous ‘American Fur Company,’ and for over thirty years the company provided pelts, for the beaver-fur hats that were popular at the time.

In the 1860s, however, the market for whitefish and trout, bound for the eastern markets, replaced the area’s fading fur trade. The local fishermen caught, dried, and packed fish destined for New York and Canadian markets, among others.

Since that time, furs and fish have not been the only commodities found on Mackinac Island. The locals offer many treats that tourists anticipate finding while on vacation, such as gourmet candies and specialty drinks.

Shopping for souvenirs in the latter part of the 19th century, it was the Victorians who turned the remote island into a hot spot of summer resorts. After the Civil War, the cooler climate of the island called to city-dwellers from the industrial areas of Detroit, Chicago, Cleveland, and Buffalo. To provide for the surge in tourists, companies for the railroad built inns, like the luxurious and renowned Grand Hotel.

Near the turn of the century, wealthy industrialists from the Midwest began to build their own summer cottages on the bluffs, rather than stay overnight at the motel. As the island filled with seasonal tourists, the locals began to cater to them, with areas dedicated to hiking and sightseeing, bicycling, playing tennis, and golfing at the Wawashkamo Golf Course.

One of the original reasons that the island drew out-of -towners was its unique and spectacular scenery. The natural landmarks of limestone and caves were what kept people returning, long before the amenities offered by the Grand Motel.

Originally, natives to the area viewed the island from the mainland. To them, the exceptionally high bluffs appeared as an enormous reptile, and they named it “big turtle,” or in their language, “mish-la-mack-in-naw,” and Mackinac Island was born.

The unique natural formations of limestone intrigued the early men who explored the island. They found it to be a mystical place, and chose to use the caves as tombs for their dead. One such location was Skull Cave.

Created post-glacially by the waters of Lake Algonquin, which was the predecessor of Lake Huron, the cave served not only as a burial site, but also as a periodic refuge. Alexander Henry, a fur trader in 1763, and survivor of Pontiac’s War, spent some time hiding from the Native Americans among the bones within its walls.

Another famous landmark on Mackinac Island is Arch Rock. This geologic limestone formation also came into being after the glaciers melted, creating the Great Lakes. On the shoreline of Lake Huron, this natural frame stands an impressive 146 feet above water.

The aboriginal people who discovered it saw no reason for its majesty, other than its likely magical properties. Although European Americans didn’t agree with this conclusion, they did value its beauty. It was for this reason that Mackinac National Park, and Mackinac Island State Park, were created, in 1875 and 1895 respectively.

Since that time, the arch has drawn hordes of tourists to the State Park. Many walking and biking trails, as well as paved roads, lead to it for a traveler’s convenience.

The scenery is breathtaking. Although some enjoy hiking through the parks, other tourists prefer their vacations to include relaxation and pampering. There are several beautiful resorts that have a full staff waiting to accommodate them.

One of the most popular destinations is the Grand Hotel, referred to as “America’s Summer Place.” This hotel has been consistently voted one of the world’s top resorts. Offering “high tea” most afternoons, the finer things of traditional society still exist there. Looking out over the Straights, this is a place that guests still “dress for dinner.”

Early American writers found inspiration among the grand buildings on the island. In fact, New England poet, Henry Longfellow, received inspiration to write his epic narrative “Hiawatha” upon a visit to Mackinac. The short story “Man Without a Country” was scribed by Edward Everett Hale from the porch of the famous Mission House. Even legendary novelist and satirist, Mark Twain, visited the island and gave a lecture at the Grand Hotel.

The 1900s found the Mackinac Island as the featured setting for cinema. In 1946, Esther Williams and Jimmy Durante starred in the love story, “This Time for Keeps.” Later, in 1979, the Grand Hotel discovered love throughout the ages as Jane Seymour and Christopher Reeve starred in “Somewhere in Time.” Not only do enthusiastic fans of the romance flock to the annual reunion of the movie, but each Saturday, throughout the summer, sees multiple weddings of admirers.

Mission Point, the location of the creation of the story “Man Without a Country” is also a popular destination. On the island’s eastern end, this resort encourages patrons to hike and bike along its trails.

One of the most unusual aspects, to this tourist stop, is its all out ban on motor vehicles. All cars, motorhomes, trucks, and motorcycles are required to remain at the port.

Traveling the island is done on bike or on foot. This ensures that the air is clean, and adds to the relaxed atmosphere. Visitors have no place they must be in a hurry to get to.

Bicycle racks, for tourists and locals alike, line the streets and store fronts. With the slower-paced transportation, visitors are sure to take in all of the sights of the 3.5 square mile island.

After a long day of sightseeing, it is calming to retire to one’s room, whether at the Grand Hotel or one of the other resorts.

With a good book and a cup of tea, or a glass of wine, travelers repose in their rooms, just like the literary geniuses of the past.

Although summer is the island’s most active season–and most resorts are closed during the colder months–at least one hotel will be open. The ferries cease transport once the Straights freeze, but the Mackinac County Airport flies the hardier of the tourists, throughout winter. During its most frigid periods, safe areas are marked with holiday lights, allowing locals and brave visitors to travel to and fro on snowmobiles. Perhaps upon enjoying the sites and history of the majestic Mackinac Island, with a cool summer breeze in her face or a brisk winter wind, a new novelist is plotting out another chapter of this great haven. Enjoy!

Planning a trip to Michigan soon? Great choice! This state…

The Top Football Colleges for Tailgating

Football season is here, and that means it’s time to…

Have you ever been to Michigan? If not, it’s high…