Many RVers have encountered an increase in regulations when attempting to asphalt boondock (park overnight outside of a campground) in the past few years. No matter if you park on the side of the road or in a parking lot, there are new laws and regulations mean you need to be extra careful where you park or you could be facing a steep fine.

Most of these regulations are requested by the local community. Honesty, who can blame them? If an RV parks in their neighborhood, makes a lot of noise, spreads their stuff around, and leaves behind damage from jacks or stabilizers, it will surely be disturbing to the residents.

The government has supported local officials with their laws and promoted the ticketing process against vigilante RVers. There are variety of fines aimed at asphalt boondockers, from the lack of street width to improper sanitation.

One example of the increased regulations is occurring in San Diego. In this large city known for excellent year round weather, there are a lot of RVs. And many of those RVers either can’t afford, or don’t like, staying in RV parks. Which means that the nearly 100,000 estimated RVers in San Diego are unhappy about the new restrictions that make overnight curbside parking nearly impossible.

On one side of the issue are residents such as Alan Harris who told the San Diego Union-Tribune,

People come in from out of the area and stay all summer. Parked recreational vehicles can obstruct views and cause crashes, a particular problem in beach communities where the streets tend to be more narrow than inland neighborhood.

On the other side are people such as RV owner and local resident Dennis Rudd who claims,

A few bad apples have ruined things for law-abiding RV owners. This is discrimination because the city has made a parking ordinance strictly against us.” 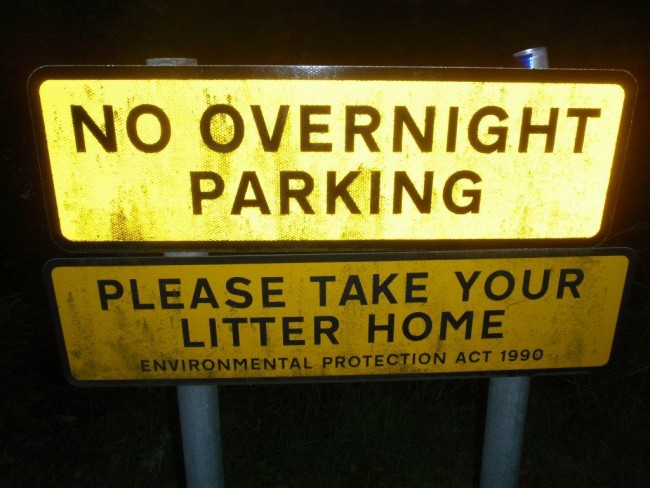 It’s clear that the laws are here to stay, but that doesn’t mean we shouldn’t practice proper asphalt boondocking etiquette in the places where it is still allowed.

Here are eight golden rules that apply to asphalt boondocking all around the country. This is the industry- sanctioned code of conduct as published by the Family Motor Coach Association.

1. Don’t stay more than a night

2. Get permission from an authorized figure

4. Don’t place your awnings, chairs, or barbecue grills outside on the asphalt

5. Don’t use hydraulic jacks on the asphalt

7. Purchase gas, food, or supplies from locals as a form of thank you.

8.  Keep an eye out for danger. You should be aware of your surroundings and leave if you feel unsafe.

Your actions and conduct are a reflection RVers around the country. Make sure you act accordingly and don’t make it harder for future campers to stay in your previous locations.

Front Living Fifth Wheels Of all the fifth wheel floor plans out there, one of the least common is the…

Luxury Campgrounds: Are They Really Worth the Price?

Luxury Campgrounds Camping is great, and for many, roughing it is a jolly good time. However, for a great many…

National parks are part of many travelers’ summer vacation plans. So many, in fact, that the more popular parks can…

Staying in an RV is one of the best ways to travel on a fishing trip! You have plenty of…