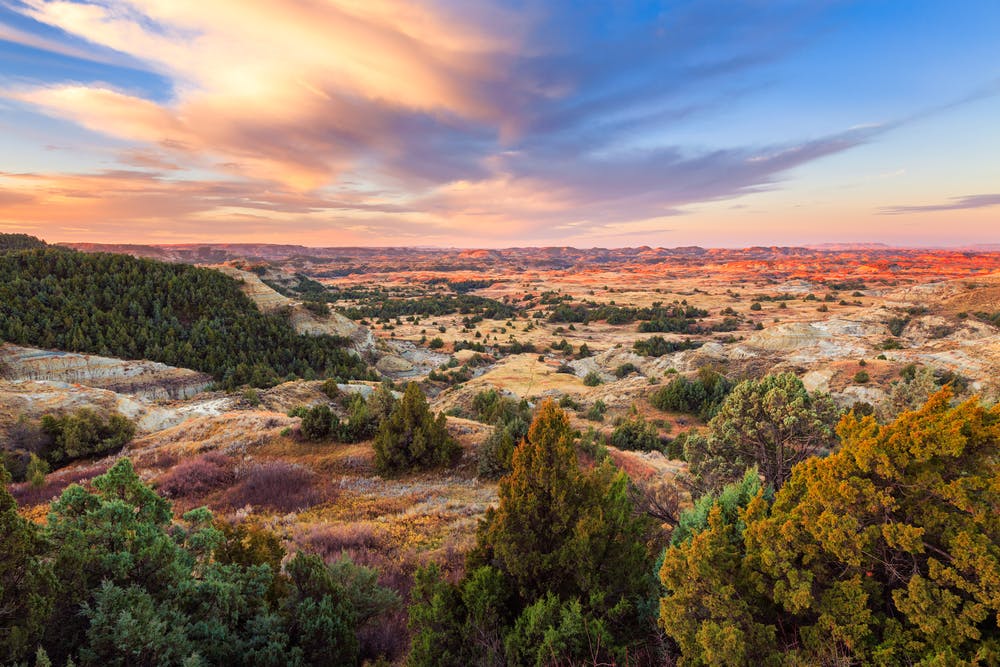 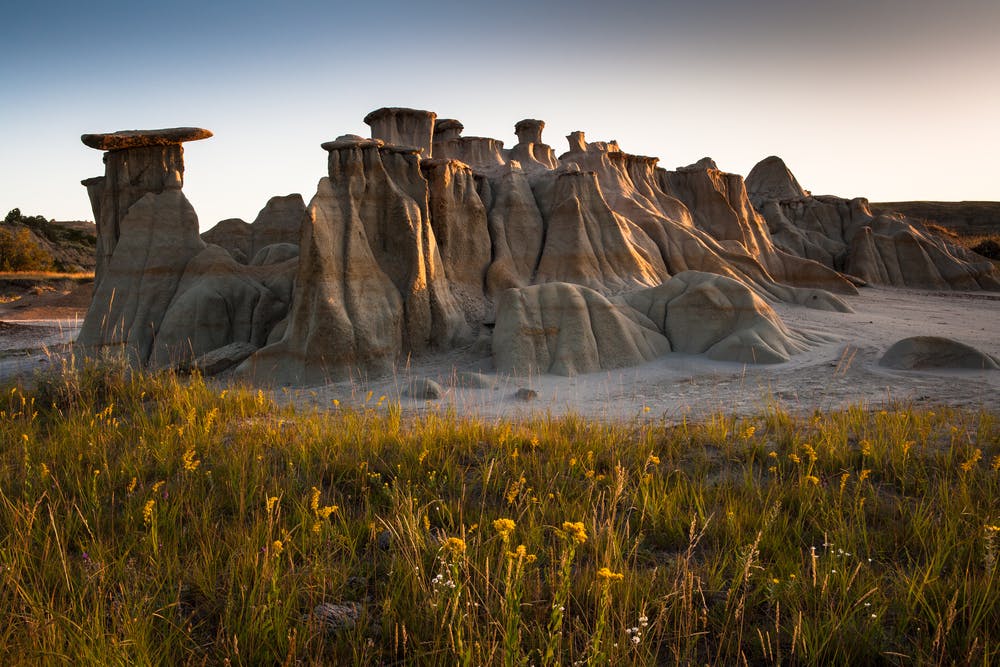 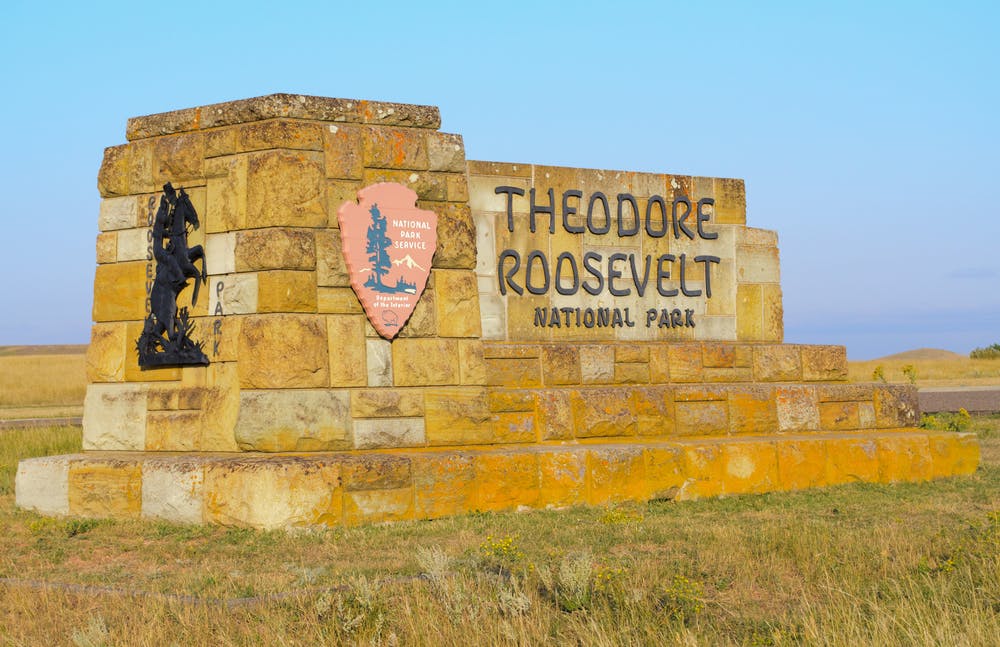 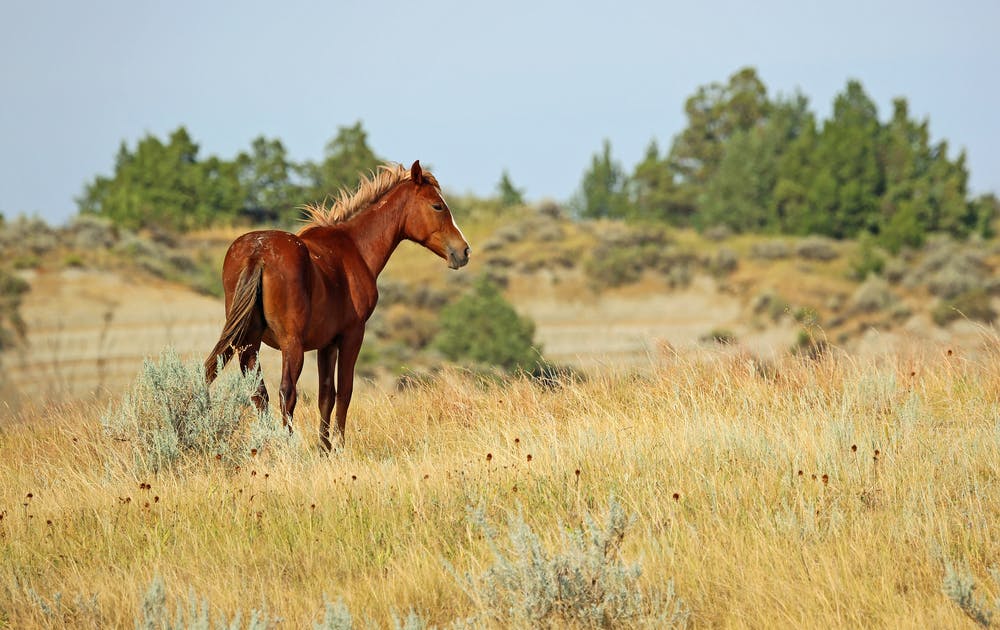 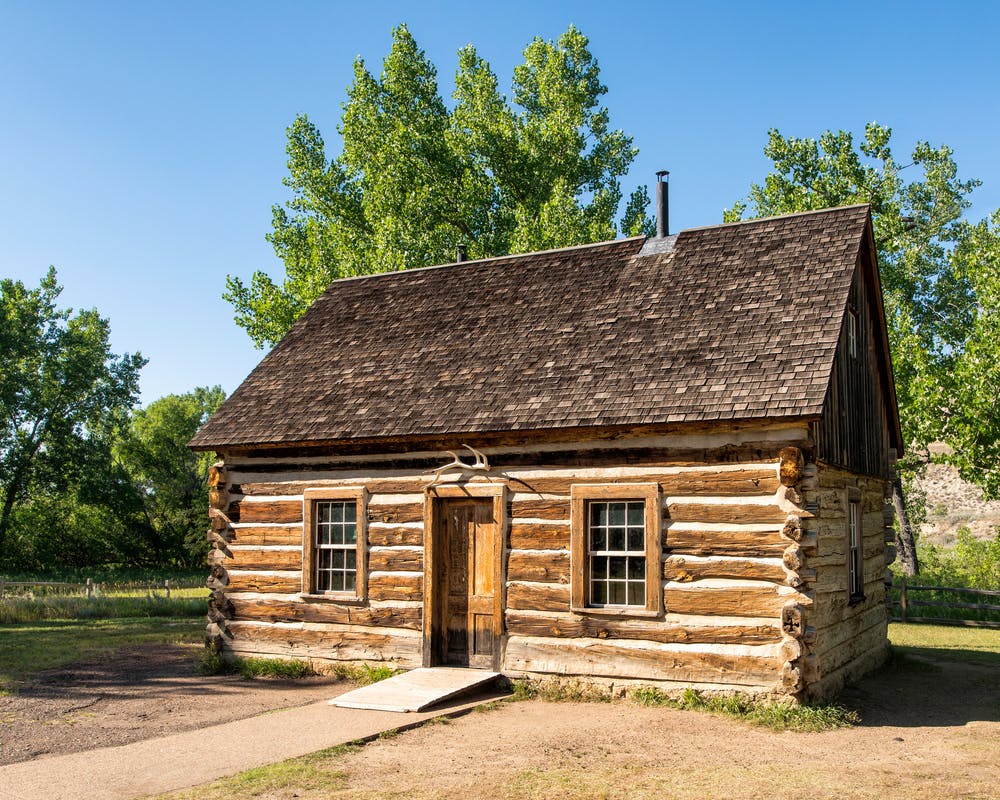 Theodore Roosevelt once said, “I would not have been president had it not been for my experience in North Dakota.” Once he became the 26th President, he helped shape a conservation policy that still today benefits many national parks, and in his honor stands the Theodore Roosevelt National Park in his beloved North Dakota. The only American national park named directly after a single person, the park covers 70,446 acres made up of three areas: the South Unit, the North Unit, and the Elkhorn Ranch Unit. The landscape varies, as it includes the badlands, wide open prairie and the Little Missouri River.

The park is one of the most pristine, protected habitats for bison in the United States. Visitors can expect beautiful views and abundant wildlife viewing, including bison, elk, horses, coyotes, pronghorns (the fastest land animal in North America!), bobcats, prairie dogs and so much more. Keep in mind that the wildlife in the park is wild and should be viewed from a distance for your safety. The terrain features rolling hills, hiking through the badlands, prairie ecosystem and canyons, sweeping views and plenty of outdoor fun, including backcountry camping, canoeing/kayaking, fishing and much more.

Weather conditions can change quickly, but in general, the wind is considerable year-round. Summers are warm with average highs between the 70s and 80s and winters are cold with lows in the single digits from December through February. In the winter, snow is likely, with an average of 30 inches during the winter months.

There is plenty to do in the towns around the park, especially in the small Badlands town of Medora. It’s the gateway to the South Unit of the park, but is also an Old West Cowtown that features horseback riding, museums, the Burning Hills Amphitheatre, and camping and luxury lodging alike.

If you’re looking for activities within the park, there is lots of fun to experience. A full event calendar can be found here. But don’t forget: the North and South units within the park are in different time zones! The North Unit is in the Central Time Zone and South is Mountain Time.

When you visit Theodore Roosevelt National Park, you have plenty of options for camping and RVing. In fact, we named the park our #1 best RV trip to take in North Dakota! Backcountry camping is also allowed in 30,000 acres of the park with no cost, although a permit is required. More information on backcountry camping is availablehere.

Keep in mind that most of the campgrounds within the park itself are first-come, first-served, although a few sites do take reservations. Here are some of our favorite campgrounds:

Most of the hikes within Theodore Roosevelt National Park are short nature hikes, featuring amazing wildlife viewing, stunning landscape and much more. Here are some of our must-try hikes. For a full hiking and trail guide, click here.

Terrain: 96 miles across all three units of the park

Terrain: Easy to moderate hike through badlands terrain and dry washes, featuring a variety of habitats.

Terrain: Easy to moderate hike down into the Painted Canyon, featuring rock layers, junipers and a variety of wildlife.

What to Do at
Theodore Roosevelt National Park

Once you are ready to leave the park and experience all the area has to offer, there is plenty to do! Whether you’re looking for a delicious meal to fill your belly, new clothes to wear home, or a museum for some culture and learning, here are some of our top recommendations for things to do around Theodore Roosevelt National Park.

In between fun outdoor activities, you’re sure to want a delicious meal. No chain restaurants here! In Medora, you can find lots of unique local restaurants with family-friendly atmospheres. Here are a few we love:

Need to pick up some last minute items you forgot to pack for your camping trip? Want to bring home a souvenir? Whatever you’re looking for, you can find it at some of the shops nearby Theodore Roosevelt National Park. Here are some of our favorites:

Hoping to move outdoors to an indoor activity? Check out some of the museums in the area. Here are a few we recommend.

While the park itself features plenty of beautiful scenery and wildlife, there is much more to be seen in the area.

How to Get to
Theodore Roosevelt National Park

Traveling to the Theodore Roosevelt National Park shouldn’t offer any problems! You can reach the park via plane, car or RV.

When traveling by car, you have plenty of options, thanks to the three entrances. The South Unit entrance is accessible via Interstate 94, exits 24 and 27. The North Unit entrance is on U.S. Highway 85; coming from 1-94, travelers can access highway 85 at Exit 42 in Belfield, ND. To access the Elkhorn Ranch Unit, travel via gravel roads is required, and road conditions can be extremely variable. Be sure to consult with park staff for information on the travel before you leave.

If you’re flying, the nearest large airports are located in Bismarck, ND and Billings, MT, and smaller regional airports in Dickinson, ND, and Williston, ND.

But we think the best way to travel to Theodore Roosevelt National Park is in comfort – in an RV! Renting an RV allows you to travel comfortably and see the sights, beauty, and wildlife offered in the park at your own pace. Even if you don’t own an RV, RV rentals are available across the country. Whether you want to start at your location and drive the whole way, or fly in and pick up an RV closer to the park, there’s a perfect option available to you.

The park is RV friendly and much of it can be seen right from the windows of your vehicle, but there are some guidelines, which can be foundhere.

If you are hoping to stay in your RV in the park, you must stay at a designated campsite within the Cottonwood or Juniper Campgrounds. There is running water spigots and bathrooms (no showers), but there are no electricity or water hookups. Both the campgrounds have a variety of back-in and pull-through sites, which can accommodate most large vehicles.

Theodore Roosevelt National Park does collect a park entrance fee for all visitors age 15 and over. Find more information about the variety of passes offered, including an annual park pass and interagency passes here. Private vehicle, motorcycle, and per person passes are all valid for 7 days and can be purchased online.

All persons traveling in a single, private, non-commercial vehicle.

One or two passengers on a private, single, non-commercial motorcycle.

A visitor traveling on foot, bicycle, horse or other non-motorized means of travel. Youth 15 and under are admitted for free.

Are you ready and excited for your upcoming trip to Theodore Roosevelt National Park? We are! At RVshare, we love helping our customers get outdoors, spend time making memories with friends and family and of course, seeing all the beauty our great nation has to offer. RVing is the best way to have a front row seat to all the beauty, all while being comfortable.

We want to hear all about your trip, even if you don’t rent an RV from us and are just driving in. Send us photos at [email protected], tag us on social media, share amazing details, and anything else you want others to know about your experience for a chance to be featured on our blog or social media channels.