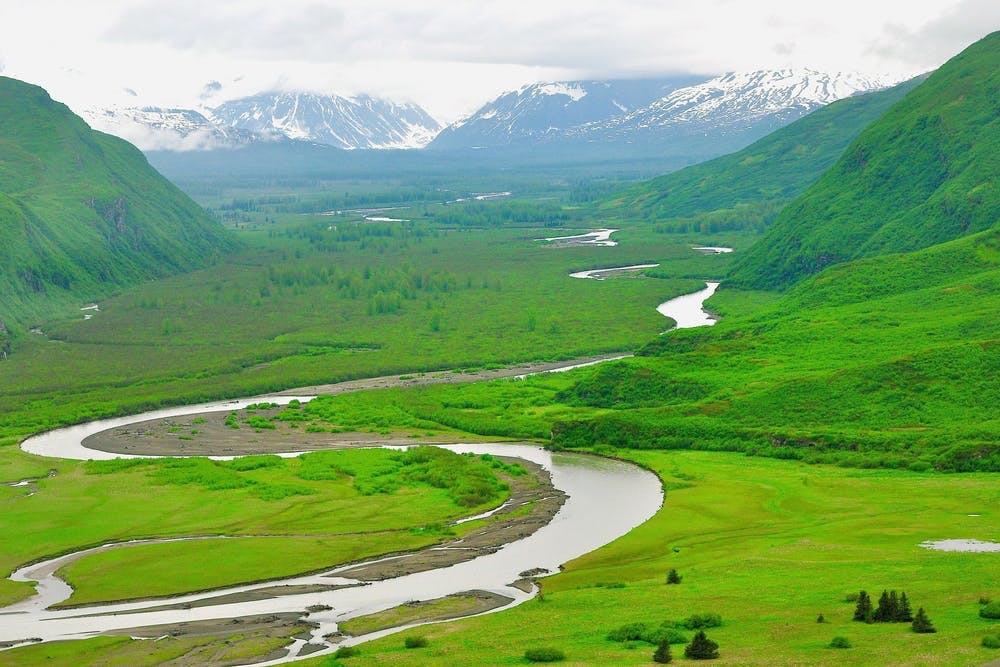 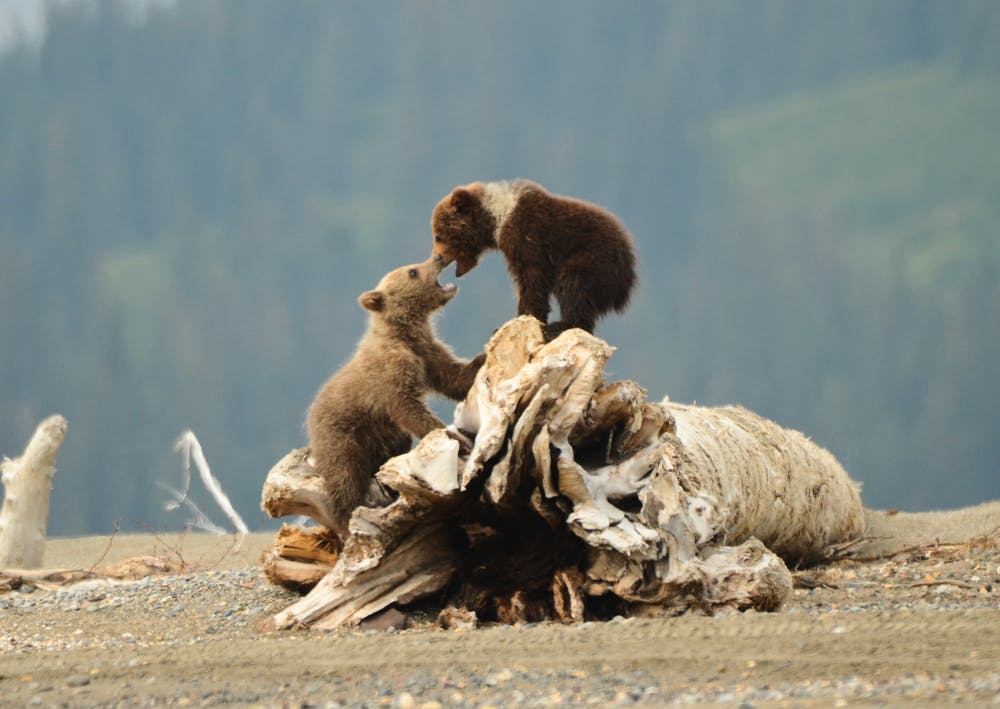 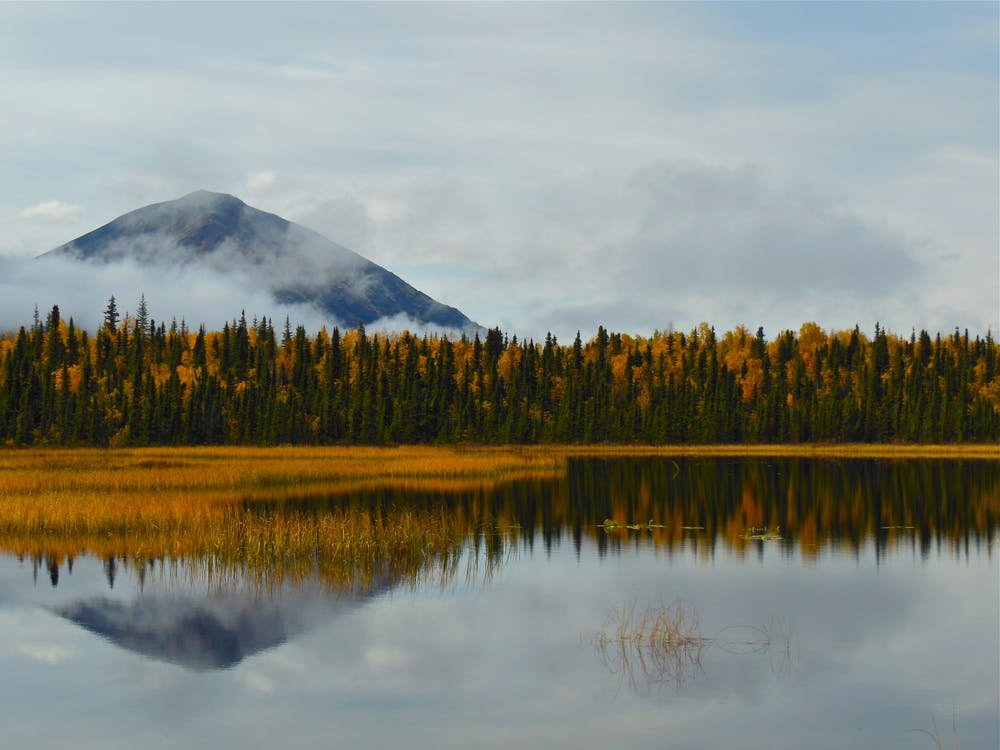 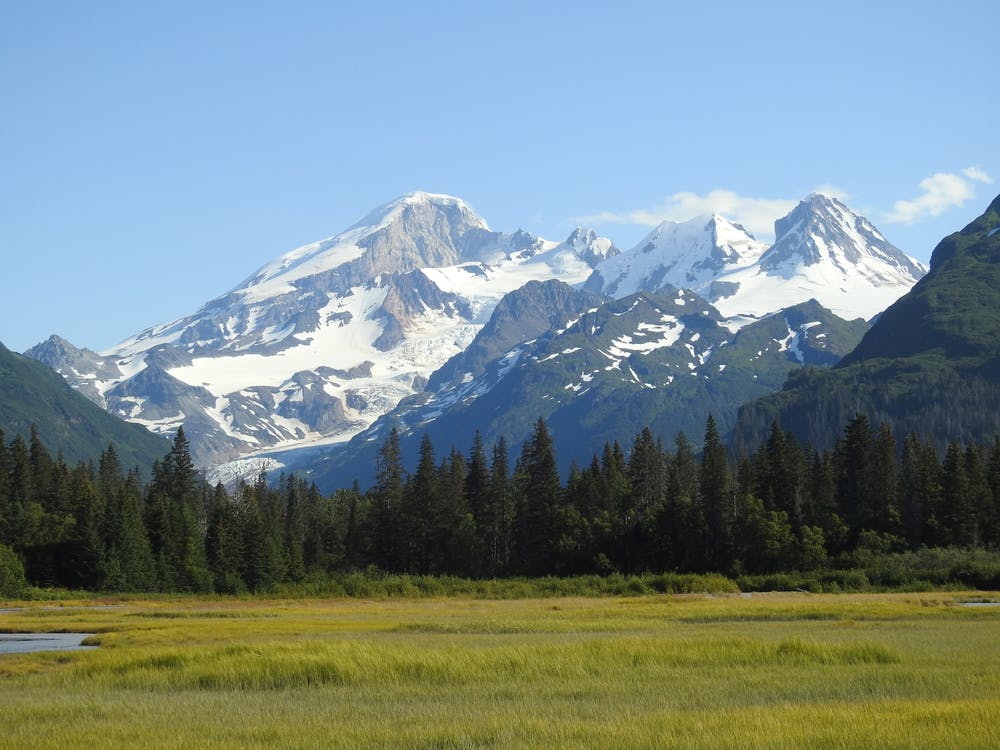 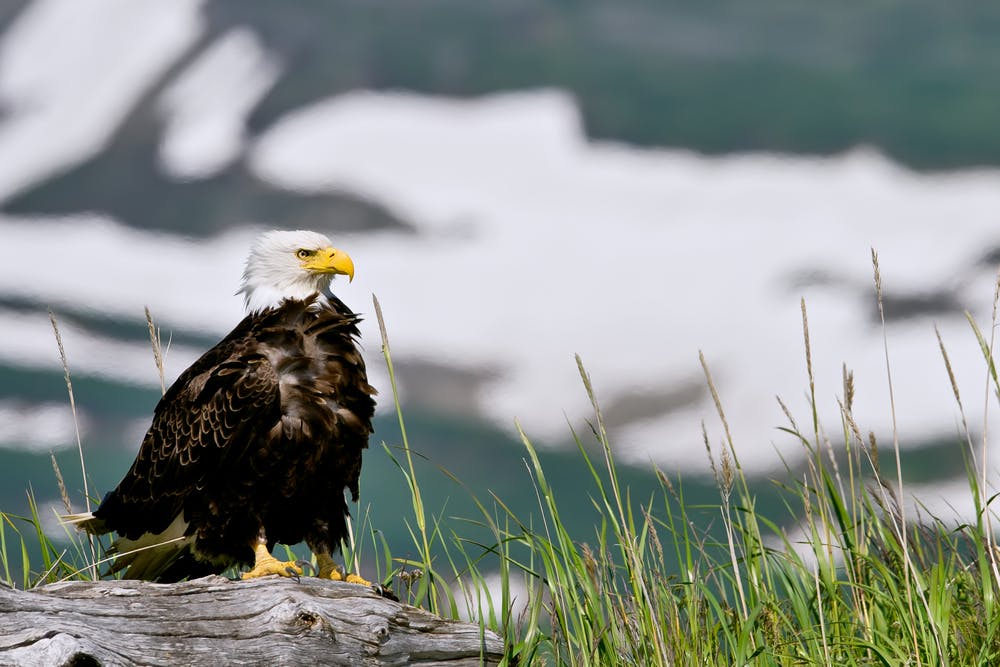 Tucked in the south-central crook of Alaska, Lake Clark National Park and Preserve is an untamed wilderness of epic proportions. It boasts alpine tundra, glaciers, glacial lakes, rivers, and two volcanoes inside more than 4 million acres, and is home to a dizzying array of wildlife. Sighting opportunities ranging from grizzly bears to caribou to wolves, not to mention the sockeye salmon that spawn inside its streams. These fish are critical for the park’s unique ecological dynamics, and also help supply the Bristol Bay fishery, one of the most important sources of salmon in the country.

Because it’s so vast, the weather patterns at Lake Clark National Park can actually be split into two distinct climate areas: the coast and the interior. The coastal region sees frequent rain and fog, averaging between 40 and 80 inches of precipitation annually, while the interior sees only 17 to 26. The coast also offers milder winters, whereas the interior regularly reaches extremely cold temperatures as low as -40 F. Keep in mind, however, that this is Alaska, and freezing temperatures are possible at any time of the year. From late September until early April, you can expect to see snow in the park; the namesake lake begins freezing in November. Because the weather is so extreme and variable in this region, it’s especially important to keep tabs on the forecast as you’re planning your adventure -- and to bring along the foul weather gear you may need. Click here to see the park’s official weather page, which also links to resources for real-time updates.

About a hundred miles southwest of Anchorage, Lake Clark National Park and Preserve is actually relatively accessible for an Alaskan wilderness, but you should still plan to have all of your supplies before entering its boundaries. The park is not on the road system, and so is primarily visited by hiring small planes from the nearby communities of Anchorage, Kenai, or Homer.

Visitors to Lake Clark engage with the wilderness by partaking in a wide variety of outdoor recreational activities, including hiking, biking, bear- and bird-watching as well as taking on the water system in power boats, rafts, or canoes. Local tour companies provide guide services to visitors, and park officials may also occasionally offer organized events and opportunities. Check out the official National Park Service calendar for full details, as well as the directions page for more information about tourist resources in the area.

Because Lake Clark National Park isn’t on Alaska’s road system, there are no RV campgrounds within the boundaries of the wilderness itself -- though tent campers and backpackers are largely free to set up wherever they like, and also have a few developed options to choose from. There are also a number of lodges, cabins, and bed and breakfasts run by private owners inside the park, a majority of which are at Port Alsworth.

Below, we’ve listed a few RV campgrounds in the proximal communities, where you might create a “home base” from which to take a more rugged trip into the park’s interior. For more information and a list of private lodging options inside the park, see this webpage.

Lake Clark National Park is a wilderness in the truest sense of the word. There’s only one set of maintained trails in the entire 4-million acre property.

That said, adventurers have avid and endless opportunities to explore outside of the managed Tanalian Trails -- though wilderness survival and wayfinding skills are absolutely critical. For all but the most seasoned outdoorsmen and women, we suggest hiring a guide for your excursion into the park.

Below, find information on the park-maintained Tanalian Trails, and click here to download the PDF map and trail guide

Distance: 1.7 miles (3.8 miles when combined with Falls and Lake Trail)

Terrain: A moderate trail meandering through quiet birch groves and past a beaver pond.

Terrain: Take a moderate climb up spruce-strewn hillsides to take in a sweeping view of the park’s namesake lake. See a 30-foot glacial waterfall flowing over a backdrop of ancient lava.

Terrain: This is a short but very strenuous climb, including steep switchbacks and rocky terrain. But it rewards those who make the effort with some of the most stunning panoramic lake views in the park.

What to Do at
Lake Clark National Park

Although the park itself is a remote wilderness with little to offer in the way of resources, south-central Alaska is a vacation destination hub, filled with things to see, eat, and do.

You’ll doubtless get sick of sustaining yourself on trail mix and pemmican while within the park’s borders. Here’s where to catch a real meal once you fly back to home base.

Type: Whether your go-to crust is thin or thick, regardless of whether you prefer marinara or barbecue sauce, this Kenai pizza joint serves up pies custom-crafted to your liking.

Type: This basic outfit offers burgers and other hearty fares within the park boundaries, nestled in the small village at Port Alsworth.

Type: If you’re looking for a date night destination, look no further than this Anchorage eatery, which specializes in -- you guessed it -- local Alaskan seafood, as fresh as fresh can be.

Type: Combining local seafood dishes like Halibut Cove mussels with stick-to-your-ribs fare like poutine, this down-home cafe has something for everybody.

Type: A Homer institution, you can’t say you’ve visited the Kenai Peninsula if you haven’t had a bite -- or at least a beer -- at the Salty Dawg. The building was actually one of the first cabins built in 1897, when the town was being established.

You may have come to Alaska to get away from civilization -- but it’s good to be able to pick up those odds and ends you’ll doubtless find you need. Besides, you’ve gotta get a few souvenirs to remember your trek by, right?

While the most magnificent museum in Alaska is the landscape itself, there are plenty of cultural exhibits to tide you over on a rainy day -- or simply to add to your northern experience.

Even at four million acres, Lake Clark is just one of the many life-changing sights to see in America’s final frontier. Here are some other potential stops to add to your itinerary.

How to Get to
Lake Clark National Park

Unlike many of the other American national parks, Lake Clark is a wilderness in the truest sense of the word. It’s not connected to the road system, and so it’s accessible only via boat or small aircraft. In the same vein, there’s no infrastructure for transportation within the park borders; visitors move from place to place by foot, kayak, raft, boat, or small plane.

The nearest international airport to Lake Clark is at Anchorage, which is about a hundred miles northeast of its boundary. There are also smaller airfields at the cities of Kenai and Homer, though service to these may be limited or nonexistent.

Once you arrive in proximity to the park, you can travel to the park itself by air taxi or with a tour guide group. The National Park Service has a helpful compilation of local travel operations at the Lake Clark website. An RV is a great way to establish a comfortable and convenient home base from which to orchestrate your adventures, and you can find RV rental listings through RVshare all over the country -- including in the Alaskan wilds.

There are no entry fees for Lake Clark National Park and Reserve, nor do you need to obtain National Park Service permits for recreational activities pursued inside including camping, backpacking, river running, or bear viewing.

Regardless of how you get yourself there, we can’t wait to hear all about your wild Alaskan adventure! Send those snaps and stories to us directly at [email protected], or tag us when you post them on Facebook and Instagram. We’ll feature a few lucky readers on our own social media channels, or possibly in an RVshare blog post!