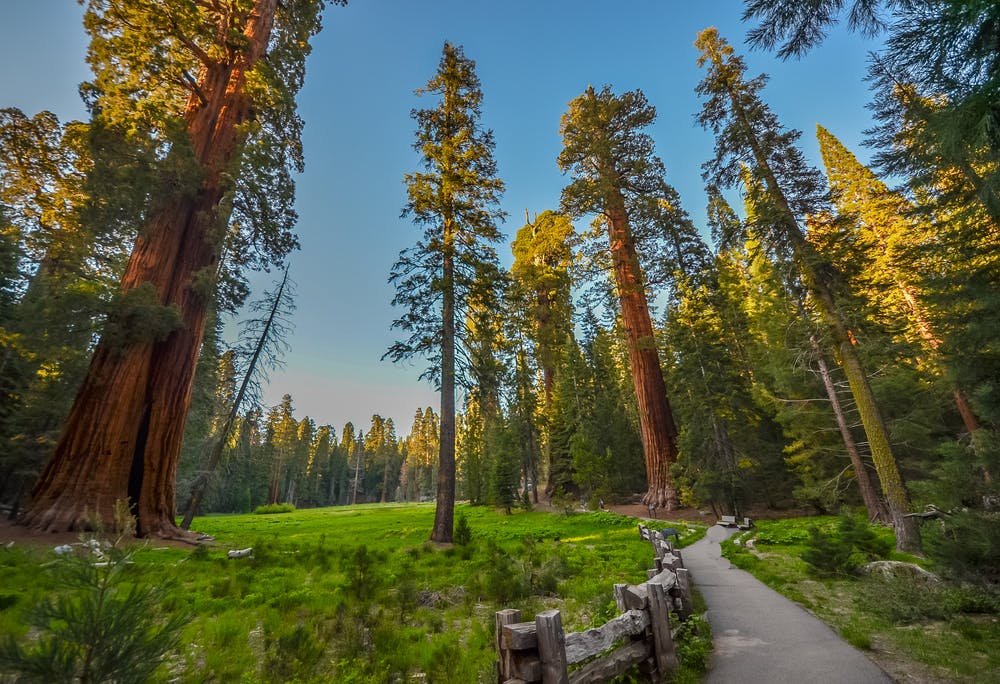 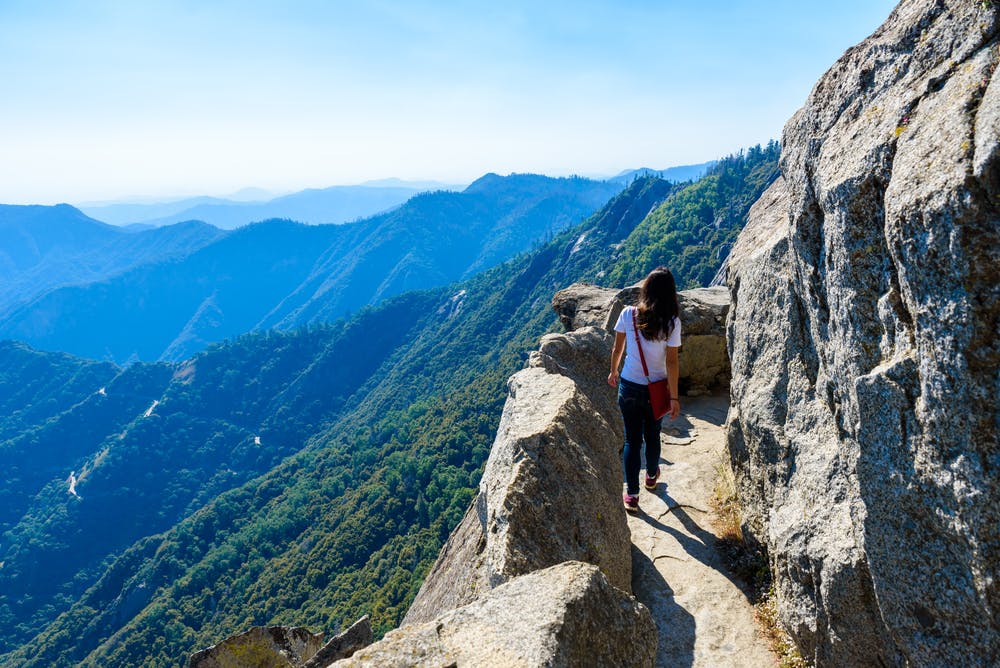 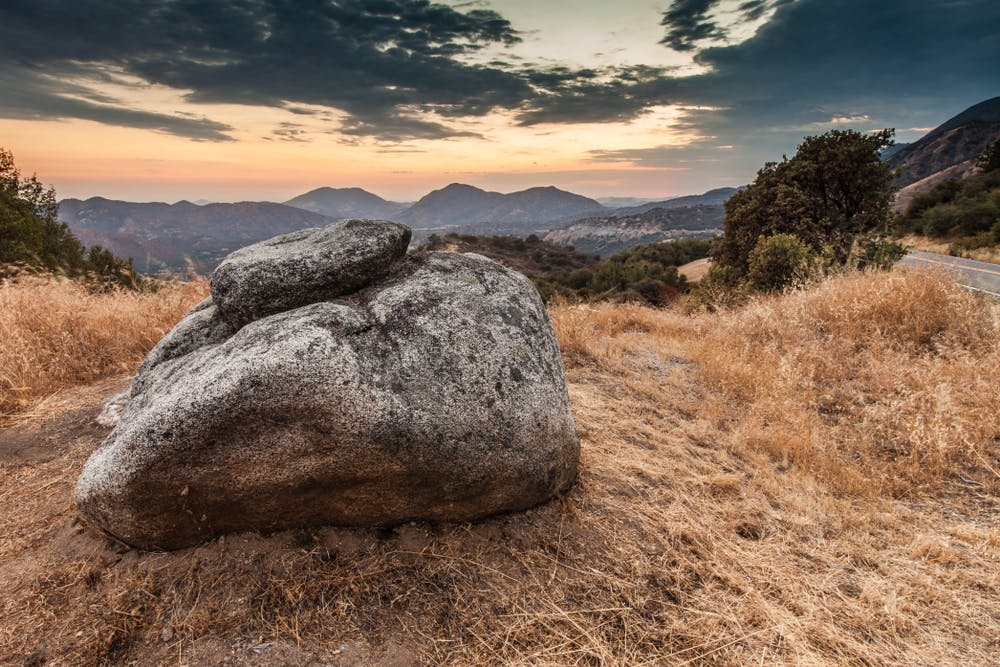 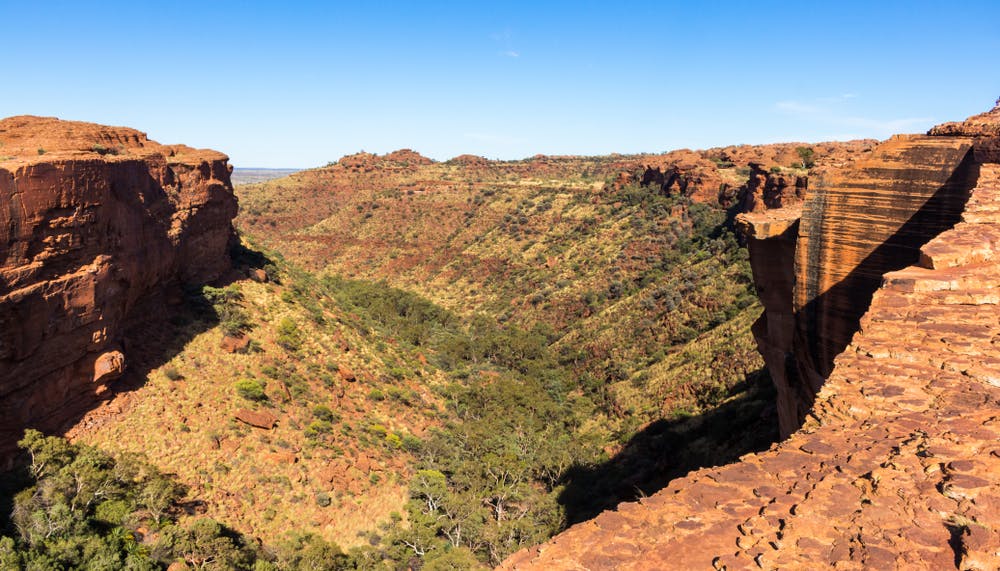 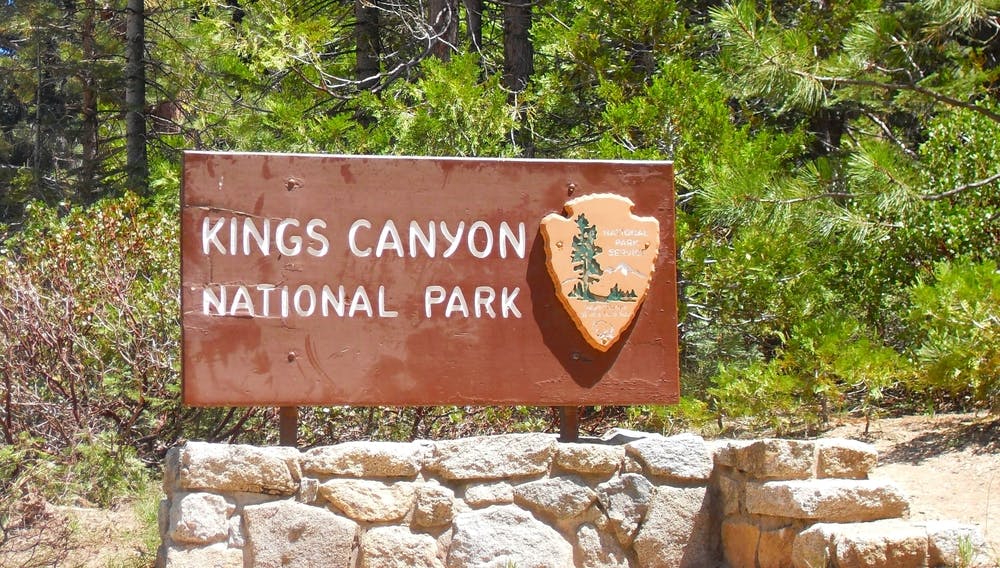 Kings Canyon National Park is adjacent to Sequoia National Park, and like Sequoia, Kings is home to giant, impressive-looking sequoia groves. The park is best known for the General Grant Tree, proclaimed by President Coolidge as “The Nation’s Christmas Tree.” These trees, along with stunning views of the Sierra Nevada mountain range, and sparkling mountain lakes and streams, promise an exciting adventure when you visit.

Because the park has such a wide range of elevation, the weather varies greatly depending on where you are. Summer temperatures in the sequoia groves are comfortable while the shadeless foothills are hot and dry. Snow stays in the mountain passes well into the summer. During the winter, you’ll find snow in the sequoia groves and rain in the foothills.

Kings Canyon is near several towns, including Clovis and the big city of Fresno. When you’re through exploring the sequoias and the rest of the park, head into a neighboring town for some tasty Mexican food, or to see the fascinating underground grotto built by one resident to escape the sweltering valley heat.

There is plenty to do inside Kings Canyon as well, including guided hikes and ranger-led programs. You can find an entire calendar of events here. Visitors can do many self-guided things on their own as well, including rock climbing, backpacking, touring the sequoia groves, horseback riding, and more.

There are many public campgrounds within the park, and some private ones in the nearby towns as well. Check to make sure the campground is open during the season when you want to visit, and make reservations to be sure you have a spot.

There are many different kinds of hikes within Kings Canyon National Park. Wander through shady sequoia groves, hike the foothills, or stroll along a raging river to a beautiful overlook.

Terrain: This paved trail gives you a closer look at one of the world’s largest living trees. Also along the hike, stop by the historic Gamlin Cabin and the Fallen Monarch.

Terrain: Quiet path through meadows and creeks, through a sequoia forest.

Terrain: The hike up this granite peak gives you a 360° view over the sequoias in Redwood Canyon, along with the Buck Rock Fire Tower and the Sierra Mountains beyond.

Distance: 4 miles round trip with a 600-foot elevation gain

Terrain: The trail offers great views of Redwood Canyon from the summit.

Terrain: This canyon is one of the largest of all sequoia groves. There are sixteen miles of trails, from short walks to overnight backpacking trips through the forest.

Terrain: This paved path offers a short, shady walk to a mighty waterfall racing through a granite chute.

Terrain: he trail begins with boardwalk and gives way to formerly hardened surfaces that were washed away during a flood. Some spots are now difficult for wheelchair travel. The trail passes high granite walls, meadows, and the Kings River.

Distance: 2 miles round trip with a 600-foot elevation gain

Terrain: A somewhat strenuous hike along a forested trail, with views of the Monarch Divide, which ends at the shady glen of Sheep Creek.

Distance: 8 miles round trip with a 600-foot elevation gain

Terrain: Sandy trail that follows South Fork Canyon through forest and chaparral, past rapids and cascades, to one of the largest waterfalls in the park.

Distance: 13 miles round trip with a 4,000-foot elevation gain

Terrain: This strenuous, all-day hike heads past Sheep Creek, you can climb to Lookout Peak, which offers beautiful vistas of the park’s backcountry.

Terrain: The trail includes some stairs and if you’re not used to the 7,000-ft elevation you may want to rest on the benches along the path.

Terrain: This paved trail circles Round Meadow and has panels describing sequoia ecology.

Terrain: To reach the top of the granite dome, climb a 300-ft stairway. You’ll be greeted by beautiful views of the Great Western Divide and the western part of the park.

Terrain: An easy walk along the Marble Fork of the Kaweah River to the granite cliffs and cascading waterfall at Tokopah Canyon.

What to Do at
Kings Canyon National Park

After you’ve wandered through ancient forests and hiked the mountains of Kings Canyon, you may be ready to try some other things nearby. See the tallest mountain in the lower 48 states, swim in a mountain lake, or shop Native American art made by local artisans.

How to Get to
Kings Canyon National Park

There are many ways to get to Kings Canyon National Park. Its location in California is relatively central, which means visitors from both the Bay Area and from southern California can easily drive to the park. You can reach Kings Canyon by plane, car, or RV. Because it’s right next to Sequoia National Park, you can enter either directly into Kings Canyon at the Big Stump Entrance, or enter via Sequoia at the Ash Mountain Entrance and then drive through to Kings Canyon.

To get to Kings Canyon and the Big Stump Entrance from San Francisco, take I-80E to I-580E. Continue onto I-205E, then merge onto I-5N. Take CA-120E to CA-99S. Then take exit 133B onto CA-180E. Continue to the entrance. To get to the Ash Mountain Entrance from southern California, take I-5N to CA-99N toward Bakersfield/Fresno. Take exit 96 onto CA-198E towards Visalia. Continue to the entrance to Sequoia National Park.

If you’re flying into the area, the Fresno Yosemite International Airport is the closest large airport. San Jose, San Francisco, and Oakland all have airports in the Bay Area and LAX is the nearest airport in southern California.

Another excellent way to experience Kings Canyon National Park is by renting an RV. RVing allows you to travel at your own pace and stop wherever you wish to explore the sights along the way. If you don’t own an RV, RV rentals are available. You can fly into town and rent an RV near Kings Canyon, or rent one in your hometown to drive to the park. There are some mountain roads through the park, so be sure to readthis advice if you’re driving an RV in the area.

There are plenty of RV campgrounds in and around the park, just make sure the campground is open at the time of year you’re planning your trip and make reservations in advance.

There is a fee to enter Kings Canyon National Park. Your fee covers both Kings Canyon and Sequoia National Parks. You can also purchase your pass in advance here. If you have a fourth grader, be sure to get the Every Kid in a Park Pass, which allows them and everyone in the vehicle with them free entrance into all national parks for the year. You can find out more about the program here. You can also purchase Annual Passes and Lifetime Senior Passes here.

7-day pass for all passengers on one private, non-commercial motorcycle.

7-day pass for one individual with no car (bicyclist, hiker, pedestrian). Youth 15 and under are admitted for free.

A visit to Kings Canyon National Park is a great way to experience California’s beauty and wilderness. The breathtaking giant sequoias and awe-inspiring scenery of the Sierras promise a trip you’ll remember for a long time. Here at RVshare, we love helping people get outside and experience the beauty of nature with friends and families. RVing is a wonderful way to create memories with loved ones and see the natural world together. Whether you explore Kings Canyon National Park on your own or in an RV rental from us, we want to hear all about your trip! You can share pictures with us by emailing them to [email protected] Also be sure to tag us on social media to share details and tips about your visit. Your adventures could be featured on our blog or social media channels!