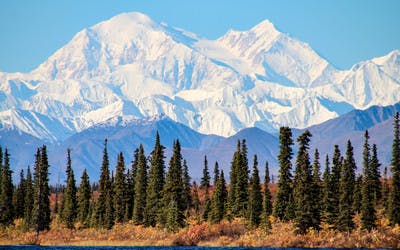 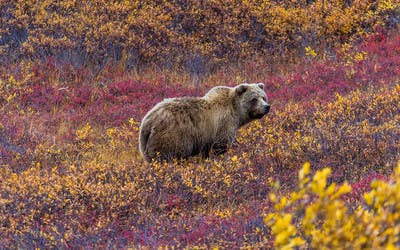 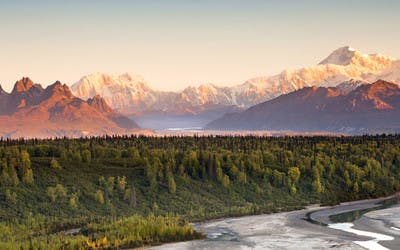 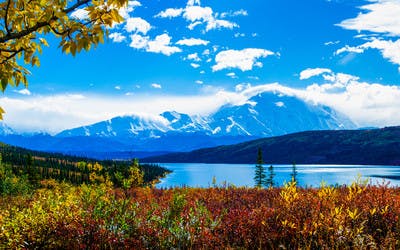 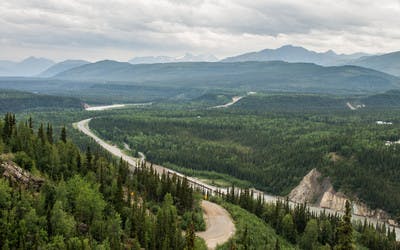 Denali National Park and Preserve is located in Interior Alaska and boasts Denali, the highest mountain in North America. The area encompasses 6 million acres of forest, glaciers, snow, and bare rock, making it larger than the state of New Hampshire. The National Park Service reports that every year, more than 640,000 visitors flock to the national park and preserve to experience its breathtaking scenery, snow-capped mountains, and plentiful wildlife.

Even in simply saying the name of this jaw-droppingly beautiful national park, you’re invoking ancient cultures who have intimately known and stewarded these lands since time immemorial. What is today Denali National park has long been the ancestral lands of the Koyukon people, who gave the mountain its Athabaskan name centuries before William McKinley was even conceived. Read more about the indigenous history of Denali National Park here.

Weather in Denali National Park and Preserve involves long winters, followed by short growing seasons. Its average temperature in Winter is just 5.8 F, followed by 28 F in Spring, 53 F in Summer, and 24 F in Fall. Weather is so unpredictable here, however, that there have even been instances of snowfall in August.

There are plenty of towns and villages both near and on the outskirts of the park, including Talkeetna, Anderson, McKinley Park, and the famous North Pole. The nearest cities include Anchorage (Alaska’s largest city) and Fairbanks, both which have plenty of shops, museums, eateries, and sightseeing opportunities.

When it comes to in-park events, you’ll be spoilt for choice at Denali National Park and Preserve. Because the area is open year-round, activities at all levels of difficulty and exertion can be found. These include hiking, camping, wildlife viewing, flightseeing, cycling, dog sledding, mountaineering, and so much more. For a full list of in-park activities and adventure ideas, click here. While Winter can provide solitude and a bounty of fun, snow-filled activities, most people travel to the park in the Summer months when the park is accessible by bus.

With six campgrounds, Denali is a great place for tent, car, or RV campers. You also have the option to stay at a private or public campground just outside of the park and preserve. Just keep in mind that the in-park campgrounds do fill up quickly, particularly in Summer, so reservations are recommended. Additionally, the majority of these campgrounds are only in operation during peak season, from May through to September. There are also some regulations you should familiarize yourself with first if planning to stay within Denali.

There are two ways to hike in Denali, including on one of the very few marked trails, or off-trail in nearly any direction you choose. One of the reasons Denali exists is to provide its visitors with a place to explore a trail-less wilderness. Because of this, there is a very limited network of hiking trails, but we’ve managed to still find some great recommendations below. For a full list of hiking trails, click here. There are also a number of ranger-led hikes for those wishing to learn more about their surroundings.

What to Do at
Denali National Park

Once you’ve experienced Denali’s beauty on-foot through the various hikes above, it’s time to indulge in some activities outside of the park, including eating, shopping, exploring, and sightseeing. There are plenty of amazing things to entertain you and your family in Denali’s surrounds, so we’ve listed our recommended restaurants, shops, museums, and landmarks for you to visit during your stay.

Alaska's cold-water seafood is the centerpiece of the region’s cuisine, with salmon and freshly-caught king crab often on most restaurant menus. Whether you’re a lover of seafood yourself or are craving something different altogether, the following suggestions certainly won’t disappoint.

Type: Fine dining with a view

Need to pick up some supplies for your trip? Or simply want to hit the shops to see if you can grab a bargain? There are plenty of shopping opportunities in and around the national park to take your fancy, whether you’re just passing through on your way home, or making an afternoon out of it.

While there’s plenty of educational resources and tours within Denali, there are also some fun and interactive museums to be found outside of the park. These are perfect for entertaining the kids (or adults) during a rainy afternoon, or even for stopping-by when traveling to or from Denali.

Museum of the North

Once you’ve explored all that the Denali National Park and Preserve has to offer, you’ll find that there’s also plenty of sightseeing opportunities located nearby. While traveling in the area, you won’t want to miss the following famous landmarks.

How to Get to
Denali National Park

You have plenty of options when traveling to Denali National Park and Preserve, including via car, plane, train, or RV.

If choosing to travel by train, Alaska's state-owned railroad connects Anchorage to Fairbanks, and runs directly through the entrance of Denali. For more information, click here.

The only entrance into Denali is along Alaska Highway 3 (also called the George Parks Highway) about 240 miles north of Anchorage, 120 miles south of Fairbanks, and 12 miles south of Healy.

For those wishing to fly into Alaska to visit the park, air travel to either Anchorage Airport (ANC) or Fairbanks Airport (FAI) is the easiest entry to Alaska. Then you'll want to hire a car or RV, or travel via bus or train to reach Denali.

If you truly want to make your trip to Denali National Park and Preserve a memorable one, then why not rent an RV to camp in style? RVing doesn’t just grant you access to some breathtaking sights within the park, but it also lets you experience all of the wonderful things about camping in nature, whilst not giving up on the comforts of home. RV rentals are available across the country, so if you want to start at your location and drive the whole way, or fly in and pick up an RV closer to the park, there’s a perfect option available to you.

Visiting Denali entails one or more fees, including a $10 per person fee to enter the park. This fee provides the visitor with a 7-day entrance permit and persons under 15 years of age can enter for free. There are also a variety of passes (Denali specific or nationwide) that will cover your entrance fee. You can read more about these here. Other fees may also apply, including campground fees, bus fees, or special use fees. You can also learn more about entry fee-free days here, as these occur from time-to-time.

We’re so excited about your trip to Denali National Park and Preserve and would love to hear all about your experience! Whether you rent an RV from us for your holiday or decide to simply drive and camp in a tent, we still want to hear your stories about Denali. Send us photos at [email protected] or tag us on social media. Feel free to share your favorite memories and anything else you want others to know about your experience for a chance to be featured on our blog or social media channels.