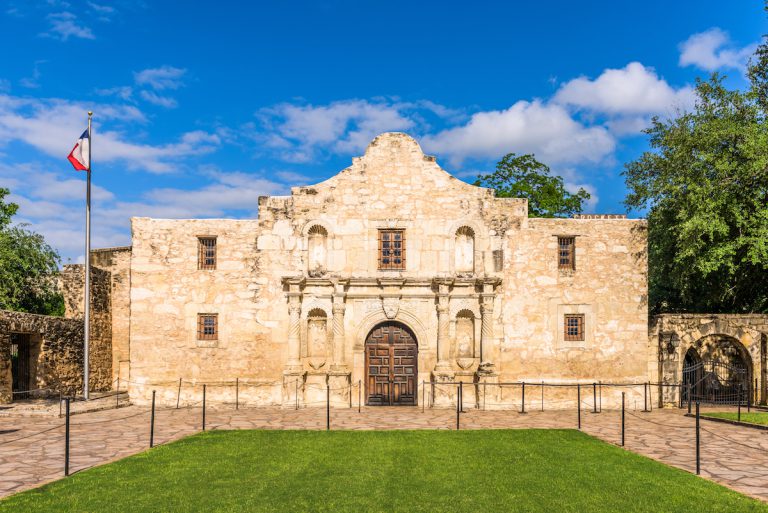 From sprawling national parks to historic battle sites to quirky roadside attractions, Texas is full of popular landmarks. And since the state is so large, RVing to these landmarks is one of the best ways to see them. Not sure where to start? We’ve rounded up some of the best historic and natural landmarks for you to visit in Texas.

What are Some Famous Landmarks in Texas?

There are many popular U.S. landmarks to see in Texas. Here are our top 10 to get you started.

Big Bend National Park in southwestern Texas has activities for all adventurers. This 801,000 acre park is full of mountains, canyons deserts, thermal hot springs, and the Rio Grand River. It’s a top destination for hikers, mountain bikers, and kayakers and full of gorgeous desert scenery. And no matter if you’re a beginner or an expert hiker, you’ll be able to find a trail that suits your experience level.

Things to do near Big Bend National Park: It’s one of the most remote national parks in America, so there aren’t many big cities nearby. A few of the smaller towns include Lajitas, Study Butte, and Marathon. Here are some local RV rentals to check out.

Talk about a legendary Texan landmark! The Alamo Mission in San Antonio is an 18th century Spanish mission and the site of the Battle of the Alamo in 1836. Today the mission offers guided hour long tours as well as a Young Texans Tour for kids, complete with knowledgeable guides and living historians. You can also tour the church itself.

Things to do near The Alamo: The Alamo is right in the middle of San Antonio, where there’s plenty to explore. Check out our local’s guide for fun things to do, and discover RV rentals in the area.

Texas’ State Capitol in Austin is one of America’s most distinguished capitol buildings. It’s 14 feet taller than the U.S. Capitol building and was placed on the National Register of Historic Places in 1970 and designated a National Historic Landmark in 1986. Visitors have the option of either guided or self guided tours throughout the building. Specialty tours are also available throughout the year including holiday and Halloween themed options, and specific tours focusing on Hispanic and African American heritage, veterans, and women’s history.

Things to do near the State Capitol: Located in Austin, there’s so much to see in that city alone. Check out our local’s guide for the best things to see, do, and eat. You’re also not too far from San Antonio and Houston. And if you need an RV rental, we’ve got you covered.

Palo Duro Canyon State Park is about 25 miles south of Amarillo and is the second largest canyon in the United States. There are great hiking trails throughout the park, and much of it can be seen on a scenic drive. Besides hiking, there’s also horseback riding, mountain biking, and stargazing during the evenings.

Things to do near Palo Duro Canyon State Park: The state park is between Lubbock and Amarillo, and we’ve got local guides to both cities to help you find the best things to do. There are some great local RV options to check out. You’re also near Cadillac Ranch, the next landmark on our list!

Another of those iconic landmarks, Cadillac Ranch pops up on pretty much any Historic Route 66 must see list. Cadillac Ranch is a public art installation in Amarillo created in 1974. It’s made of 10 Cadillac cars with their noses buried in the ground and now covered in layers and layers of paint and graffiti. You can see it from the highway but taking the frontage road will take you to the installation itself, which is open to the public. And unlike most things, spray painting the cars is actually encouraged! So grab a can of spray paint and start tagging the cars before the next group of visitors comes and covers it up with their own graffiti.

Things to do near Cadillac Ranch: It’s just outside Amarillo in northern Texas, so be sure to explore the town. You’re also close to Palo Duro Canyon State Park, and Lubbock, Texas.

Space Center Houston is the Official Visitor Center of NASA Johnson Space Center. Visitors can learn about America’s human spaceflight program and see one of the largest collections of space artifacts in the western part of the country. Be sure to stop by Independence Plaza, a shuttle replica mounted on a shuttle carrier aircraft, where you can actually go inside both the shuttle and the carrier.

Things to do near the Space Center Houston: There’s plenty to discover around Houston. Check out our local’s guide for the best things to do. And you’re also not too far from Galveston and the beach!

Natural Bridge Caverns are the largest commercial caverns in Texas, and are full of flowstone, stalagmites, and geological formations. It’s named for the 60 ft long natural limestone bridge that spans the entrance. There are several different tours that visitors can choose from to head underground and explore the cavern’s passages and chambers. Back on the surface, a ropes course and zipline, climbing obstacles, and a giant maze provide hours of fun for the whole family, making it easy to spend an entire day here.

Things to do near Natural Bridge Caverns: The caverns are located just outside San Antonio and are a bit south of Austin. We’ve got local guides for both cities, and have you covered with local RV rentals.

If you’re craving the beach, head to Padre Island National Seashore. It’s the longest stretch of undeveloped barrier island in the world, and it protects 70 miles of coastline. This seashore separates the Gulf of Mexico from the Laguna Madre, and is filled with sand dunes, prairies, and tidal flats. There’s plenty to do, including kayaking, fishing, boating, camping, and even watching sea turtles hatch during certain times of the year. Plus, it’s run by the National Park Service, so you can attend ranger programs and learn from knowledgeable guides and rangers.

Things to do near Padre Island National Seashore: Obviously you’re here for the beach, so explore and enjoy the water! But you’re not far from Corpus Christi if you want to explore the city as well. Check out a few of the local RV rentals nearby.

One of the newer national parks in the U.S., Guadalupe Mountains National Park is home to Guadalupe Peak, the tallest point in Texas at 8,749 feet. It also includes Frijole Ranch, a museum of ranching history, as well as stagecoach station ruins. Since the park is newer, it doesn’t have all the amenities of the more established national parks, so fill up on gas and bring your own lunch or dinner. However, it’s less crowded than other national parks, so you’ll get the amazing views and scenery without the crowds.

Things to do near Guadalupe Mountains National Park: This park is also somewhat remote and near the border of Texas and New Mexico, but El Paso isn’t too far away, and you’re only a few hours from Roswell, New Mexico if you’re looking for UFOs.

Don’t let the name confuse you, we’re still in Texas. Named for the Colorado River which runs through the park, Colorado Bend State Park is full of waterfalls, springs, and caves. It’s a great place to spend a relaxing afternoon by the water or exploring the 35 miles of hiking trails. There are even ranger led cave tours, as well as fishing and kayaking opportunities.

Things to do near Colorado Bend State Park: This state park is somewhat remote and located about two hours northwest of Austin. Some of the smaller towns and cities nearby include Bend, San Saba, and Lampasas. We’ve got you covered with great local RV rentals.

Planning an RV Trip to Texas

An RV trip is an excellent way to tour the variety of landmarks in Texas, and we’ve got all the resources you need to plan a perfect vacation.

Here are guides to some of the best state parks in Texas, as well as all the national parks in the country. And as always, we’re here to help when it comes to finding the best campgrounds, local guides for Texas cities, and RV rentals. Now it’s time to get planning and start exploring!

Living in Austin, Texas, road tripping to West Texas has…