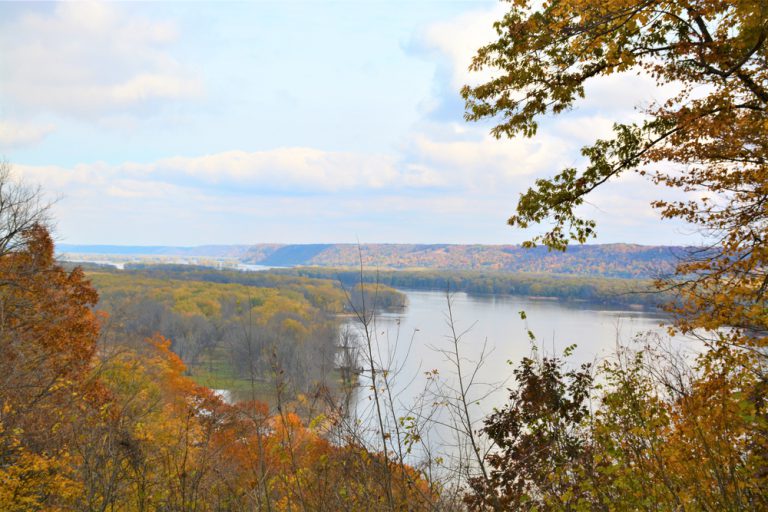 From ancient Native American civilizations and the remains left over today to the birthplaces of American legends like Glenn Miller and even John Wayne, Iowa is awash with incredible U.S. landmarks you don’t want to miss out on. Among all those cornfields and small, friendly towns, careful visitors can find themselves amongst some of the most sought-out destination landmarks in the entire country — and here are the top 10 you don’t want to miss.

What are Some Famous Landmarks in Iowa?

7. The Bridges of Madison County

Along the western banks of the Mississippi River, tucked into the upper river valley in the northeastern section of Iowa state, Effigy Mounds National Monument preserves a space that’s been held sacred by Native Americans for centuries. The effigy mounds constructed here, as long ago as the year 550 CE, are sometimes made in the shape of animals like bears, deer, bison, lynxes, turtles or panthers, though they are sometimes made in simpler rectangular and conical shapes for ceremonial purposes. Similar mounds are also found in Wisconsin, Illinois, and Minnesota, and a wide variety of Native American tribes are associated with their construction — and this monument alone contains more than 200 examples of these pieces of ancient cultural art.

Things to do near Effigy Mounds National Monument: Given its spot along the Mississippi River, Effigy Mounds is near to other wildernesses that are worth adding to your Iowa itinerary. Yellow River State Forest is just a few miles north of Effigy Mounds, and other Iowa state parks lie west and northe. Here are some RVshare rentals near Harpers Ferry to consider for your adventure.

Laura Ingalls Wilder, of the famed Little House on the Prairie books, had a peripatetic childhood — and she wasn’t born in Iowa, but Pepin County, Wisconsin. However, when she was nine years old, her family traveled to Burr Oak to help manage what was then known as the Masters Hotel, which was owned by a friend of theirs called William Steadman. Today, visitors to the Laura Ingalls Wilder Park & Museum can enjoy guided tours that will help them understand what happened between On the Banks of Plum Creek and By the Shores of Silver Lake, as well as gaining a deeper understanding of 1870s life on the prairie.

You may think Pikes Peak is significantly further west of the Mississippi — and to be sure, the famous Colorado version is well worth the drive. But Iowa has its own Pikes Peak State Park to check out, and it makes for an equally lovely getaway, complete with sweeping Mississippi River views from a towering 500-foot bluff. This state park is also criss-crossed with hiking trails and offers an affordable and well-appointed on-site campground with electrical hookups. Visitors also enjoy boating and fishing on the park’s many waters, as well as fossil hunting for those who wish to stay on land.

Things to do near Pikes Peak State Park: Just a little more than an hour north of Dubuque amidst some of the most scenic natural areas in the entire midwest, Pikes Peak State Park is just over the river from Wisconsin’s Wyalusing State Park and only a short ways south of Effigy Mounds National Monument, as described above. An RV rental is a great way to explore this part of the country fully!

Anyone paying attention knows there’s way more to Iowa than cornfields… but just in case you needed a reminder, we recommend a visit to Maquoketa Caves State Park. This beautiful, one-of-a-kind wilderness is considered by many to be the most unique state park in all of Iowa, with beautifully decorated caves carved into the native limestone. Many artifacts such as pottery and other pieces found by archaeologists show that this area has served as a human gathering place and shelter for many years — possibly even millennia — which makes it even more exciting to have the opportunity to add your story to the long, ongoing legacy of this land.

Things to do near the Maquoketa State Park: Located a few miles north of the town of Maquoketa and only a little further from Cedar Rapids and Iowa City, Maquoketa State Park is within easy driving distance of both some of the best urban spaces in Iowa and many of its most beautiful wildernesses. Here are some RVshare rentals in the area that could make your adventure even cozier.

Chances are you know that the capital city of Iowa these days is Des Moines — but it wasn’t always. Once upon a time, Iowa City was the capital, and you can still visit the Old Capitol Building in that town, which has today been turned into a museum. It also happens to be the centerpiece of University of Iowa’s campus, and although for a while school administrators were thinking about using it for office space, its interior has been renovated and repaired through the years and many events, including a fire in November of 2001. It is now available to the public to tour. Another fun fact: this stately edifice was designated a National Historical Landmark back in 1976.

Things to do near the Old Capitol Building: Home as it is to the school, known especially for its prestigious writers workshop, Iowa City is full of fun things to do and plenty of bookstores to check out. The Iowa Children’s Museum is also here, as are a number of museums affiliated with the college campus. Here are some great RVshare rentals and campgrounds in the area to check out.

Another stunning and unique natural landscape, and one of the most popular state parks in Iowa, Ledges State Park is characterized primarily by the gorge Pea’s Creek, a tributary of the Des Moines River, has carved into the sandstone here. Along with the natural landmarks here, the spot is also known for its man-made landmarks, too; the park is populated by a variety of buildings constructed by the CCC, or Civilian Conservation Corps, back in the 1930s, most notably the beautiful and often-photographed stone bridge that spans the creek. The park also offers both modern and primitive camping, and is close to small, quaint Iowa towns like Boone, Ames, and Madrid.

Things to do near Ledges State Park: Only about an hour outside of Des Moines, Ledges is also close to Big Creek State Park, Springbrook State Park, the Bushy Creek State Recreation Area and others. Here are some nearby RVshare rentals to consider for your journey.

7. The Bridges of Madison County

You may know of them from the 1995 romance, but the Bridges of Madison County are a real-life landmark — or, rather, several landmarks. There are six remaining of the 19 covered bridges originally built here, and several are accessible only on narrow, gravel roads (so if you’re driving a big rig, consider leaving it behind and using the toad for this adventure!). This collection of covered bridges is the largest of its kind in the western Mississippi valley, and has earned Madison County the moniker of “covered bridge capital of Iowa.”

Things to do near the Bridges of Madison County: Madison County lies just southwest of Des Moines, giving visitors the opportunity to go from a very urban landscape to a rural one in no time flat. It’s also not a far drive at all to Omaha, Nebraska. Here are some RVshare rentals in the area to look through, as well as some fabulous local campgrounds.

The star of the silver screen known as John Wayne — also sometimes called “Duke,” though he was originally christened Marion Robert Morrison by his parents — was born in the town of Winterset, Iowa on May 26, 1907. At the time, no one knew he would go on to become one of the most famous actors, and indeed one of the most famous celebrities of any kind, in the history of the world. Today, visitors can swing by the John Wayne Birthplace Museum to get more insider information on Wayne’s history, as well as to view genuine artifacts from the man’s childhood and life.

Things to do near the John Wayne Birthplace: The picture of a small midwestern town with a population of just over 5,000, Winterset is about 40 minutes outside of Des Moines and also close to Pammel State Park and Badger Creek State Park. Here are some area RVshare rentals and campgrounds to consider for your trip.

A visit to the Glenn Miller Birthplace in the town of Clarinda, Iowa will certainly get you “in the mood” to listen to some incredible big band music and reminisce on days of yore — even if they were technically before your time. Home not only to a well-stocked and informative museum but also the host of many community events, including the annual Glenn Miller Festival, the Glenn Miller Birthplace is a must-see bucket-list item for music lovers of all stripes, and a great excuse to get familiar with this small, sweet Iowa town.

Head to Sioux City to enjoy the greater urban landscape, but don’t forget to stop by and pay your respects at the Sergeant Floyd Monument. Originally erected back in 1801 (though it’s since been replaced by a new structure dated back to 1901), this memorial commemorates Sergeant Charles Floyd, Jr.,, a member of the Lewis & Clark expedition party who tragically died during the upstream voyage. He was buried here, and is remembered for his bravery and contribution to American exploration; he was the only person to die during the Lewis & Clark journey.

Things to do near the Sergeant Floyd Monument: Sioux City is teeming with restaurants, shops, and museums to discover, and is just a short drive south of Sioux Falls, South Dakota. Here are some area RVshare rentals to consider.

Planning an RV Trip to Iowa

An RV trip across Iowa is an excellent way to get acquainted with this unique and diverse state — and we’ve got all the content and resources you need to make the trip in style.

For one thing, we offer some of the best-priced Iowa RV rentals available on the market, and we’ve also written a guide to the 10 best campgrounds in the state. Furthermore, we’ve covered the best Iowa state parks as well as its largest and most popular cities, so you’ll know exactly what to dive into as you make your journey.

Some may try to tell you that Iowa is not…

If you think Iowa is just flyover flatland, think again:…

The Top Football Colleges for Tailgating

Football season is here, and that means it’s time to…