While all of America’s NPS-managed wildernesses are special, Yellowstone National Park bears an undeniable superlative: it was the very first landscape in the United States designated as a national park, a place so unique and stunning that it inspired the administration at the time to preserve it and set it aside for posterity.

Set into the northwestern corner of Wyoming and edging into Idaho and Montana, this massive, wild countryside is alive with unique geothermal features powered by the enormous and ancient volcanic caldera it sits upon. It’s also home to cascading waterfalls, sweeping vistas of bison-dotted plains, and craggy, glacier-topped mountains. In short: it’s no surprise that it motivated the people alive at the time to create the national parks system — nor that some four million people or so make their way to the park each year these days.

But Yellowstone’s human history long outstrips its existence as a named and boundaried national park (which designation it earned in 1872). Indigenous peoples and Native Americans have traveled through and lived in these lands since time immemorial, starting with Paleo-Indians some 11,000 years ago. Named tribes with important historical and ancestral connections to the landscape today known as Yellowstone National Park include the Tukudika, Cheyenne, Crow, and many others. 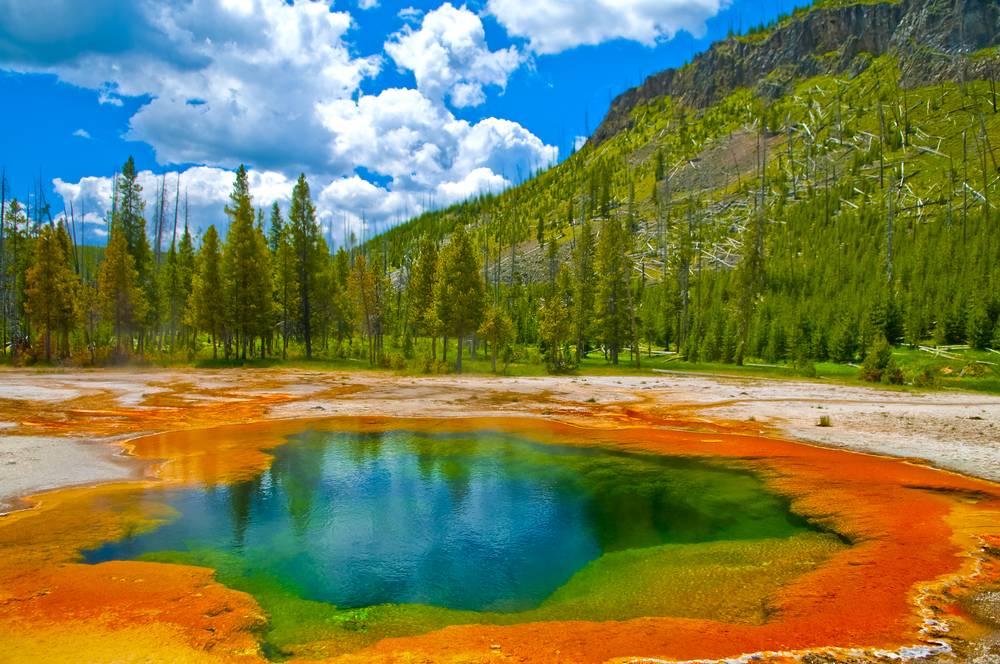 The Tukudika people were a band of the Mountain Shoshone tribe who lived in many of the places that are today considered part of the national park. Their name roughly translates to eaters of the mountain sheep, and indeed, it was common for bands of Shoshone people to be named after staples in their diet. (For example, other bands were called the salmon eaters, elk eaters, and bison eaters.)

Indeed, the bighorn sheep that can still be found in Yellowstone today were an important part of the Tukudika peoples’ diet, but far from their only source of food. More than half of their daily calories were taken in by way of edible plants including roots, nuts, and seeds as well as fruit, which the tribe foraged from along the many water sources throughout the landscape of the modern-day park.

Although the Tukudika largely stayed within the park, as those who’ve visited know, Yellowstone is a large place — and the tribe did travel as the seasons changed. Higher elevation areas were favored in the summer months, when the snow melted and made them habitable (and lush with useful vegetation), whereas during the harsh winters, the people would retreat to the lower elevations where it was relatively warm and dry, sometimes including places far enough away to be out of the modern-day park boundaries. Along with fashioning handcrafted bows and arrows to assist with their hunt, the Tukudika built sophisticated fish traps and also trained dogs to hunt along with them, sometimes using them to pull sleds for ease of carrying their equipment or hunted game.

Even after Yellowstone was designated a national park in the late 1800s, the Tukudikacontinued to live on the landscape, practicing their ancient ways of life and sustaining themselves. Soon, though, displacement took full effect: by the year 1900, the Tukudika had been largely absorbed by the Eastern Shoshone tribe of the Wind River Reservation in central-western Wyoming, along with a few other are tribes. Reservation life put a severe damper on their ability to continue their time-honored ways of life, and much beautiful history was silenced.

Along with the Tukudika, these lands have held important cultural and historical significance for a wide range of other Indigenous peoples. Today, the National Park Service acknowledges fully 27 associated tribes with important connections to the park landscape, the full list of which can be found here.

Learning more about the Indigenous history of a landscape is just the first step toward paying respect not only to the people you’re learning about, but the land itself — after all, these places were held in tender loving care by these people since time immemorial. Along with reading write-ups like this one, and learning what information the National Park Service may have on the subject, you can always check out the free web service Native Land to get a peek at whose native lands you’re standing on, whether in an American wilderness, cityscape, or in many places abroad.

But, as mentioned, this is all just the first step. Along with educating ourselves, we must also take up the mantle of stewardship and become the caretakers these lands still need today, in order to remain green, lush, and accessible for future generations.

Living more sustainably at home and wherever you go can be a lifelong project, from making major changes like converting to vegetarianism to trying to generate as little trash as possible. But for visitors exploring a destination landscape, we highly recommend adding the seven Leave No Trace principles to your travel toolkit: they will help ensure you’re living as lightly on the land as possible, and they’re pretty easy to remember and follow.

For example, Leave No Trace advocates packing out all the trash you pack into a landscape, and making sure you leave behind any tempting natural “souvenirs” you might otherwise want to pick up and take home. You can read the rest of their guidelines at the website, but suffice to say it’s a great way to ensure you’re doing your part to participate in the broader human history of Yellowstone National Park — or whichever park you’re visiting — in a way that will preserve those places for you children and their children after that.

After all, this was the first national park in not just America, but the world. What better motivator could there be for taking special care as we bask in its glory?