If we could only use one word to describe White Sands National Park, it would have to be otherworldly — an incredible stretch of more than 145,000 acres, this section of southern New Mexico boasts the largest field of gypsum sand dunes in the world. Rippling under the too-blue desert skies and dotted here and there with low desert foliage, the dunes seem to go on forever, perfect for trudging up and then sledding down with glee. It’s also historically (and is still today) used as a missile testing ground, thanks to its remote nature and ruggedness. Missile Tests still often create roadblocks (which, though frustrating, are ultimately for visitor safety) today.

Of course, the history of White Sands doesn’t start in this violent, mechanized place — or even with the happy families who flock here to sled down its slopes. Human beings have inhabited and passed through what we know today as White Sands National Park since time immemorial — as long as 10,000 years ago. The land also has cultural and traditional importance for the Apache, Tampachoa (Mansos), and Piro people.

What follows is a small part of their story. 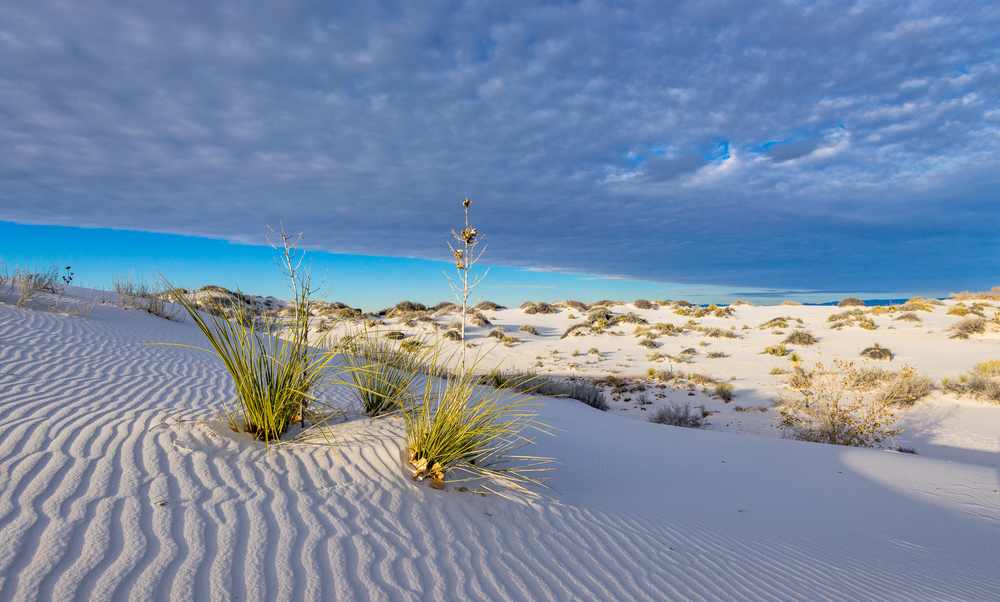 When Native Americans first found themselves in this part of the country 10,000 years ago, they didn’t see the same sight you and I see today. At that time, much of the Tularosa Basin was covered by a massive lake known as Lake Otero, which caused grasslands to thrive nearby, sustaining animals that could be used for game meat.

Paleo-Indians came to the lip of that lake around 9000 BCE, hunting the animals that lived on the grasses there including mammoths, camels, and giant sloths. While standing in front of that massive sand dune field, imagine these creatures wandering here — and how different the scene looked as a whole! Let the evolution that occurs over the passage of time amaze you.

Indeed, time did pass, and lifestyles here continued to evolve, too. As things began to dry out and heat up, large game animals went extinct, though smaller creatures were still living here and able to be hunted. The Archaic Indians, who inhabited the next archeological period, expanded their diets as well as their hunting practices, inventing the atlatl. They also began to move toward agricultural practices, first paying special attention to the wild plants they were foraging and later intentionally planting seeds to fortify their yield. Small villages began to crop up since people were no longer constantly on the move. (This is also the era when White Sands began to look more like the White Sands we know and love today.)

One way archeologists know that Archaic-period Indians were here is because of the appearance of “heath mounds” in the park. Essentially ancient campfire sites, these heath mounds are special — and preserved for us today — because of the chemical reaction that takes place when gypsum is heated and moistened. “When gypsum is heated to 300̊ F, it becomes a powdered calcium sulfate hemihydrate plaster, commonly known as Plaster of Paris,” reads the National Park Service website. “This gypsum plaster quickly hardens when moisture is added and subsequently evaporates. This process cements these hearth features in place, preserving them for thousands of years, like time capsules in the dunes.”

After the Archaic period, a people archeologists know as the Jornada Mogollon lived here, embodying a hybrid lifestyle that included both hunting and gathering as well as farming. The Jornada Mogollon continued to improve on ancient weaponry for hunting purposes and also crafted beautiful ceramic pottery.

Finally, modern tribes including Apache people had established themselves thoroughly in this part of the world when western settlers began to arrive. Today, their descendants and enrolled tribal members still live in this area and beyond, continuing the cultural traditions, celebrations and practices that have been enacted by their people for centuries.

Learning more about the First Peoples to come to a given landscape is an excellent first step toward paying respect to not only the people themselves, but the land they stewarded — so for starters, thank you for reading this short guide. We hope it added some context and nuance, and we also encourage you to check out other resources available through the National Park Service or online; the free web app Native Land is an excellent go-to whether you’re in a national park, an American city, or abroad.

But now, it’s time to take the next step: taking up the mantle of stewardship that was demonstrated to us by these Indigenous peoples for so many years. As visitors to this place — and to any place, for that matter — we should take it upon ourselves to follow best practices to ensure we’re traveling as lightly on the land as possible. One great, easy-to-reference way to do that: check out the seven Leave No Trace principles, which ensure you’ll impact whatever wilderness you’re in as little as you can, and hopefully leave it even better for future generations.

Enjoy your trip to White Sands National Park — it’s truly a place like no other!