Encompassing the broad swath of the beautiful, tropical island of St. John, Virgin Islands National Park is unlike almost any other national park on the American roster: a scenic beachside paradise that also carries monumental cultural and human import. While many of today’s travelers to the Virgin Islands are beckoned by the opportunity for fishing, boating, and other water-top sports — not to mention the year-round temperatures between 70 and 80 degrees — for centuries, these weren’t fun, temporary diversions but a way of life.

The landscape today known as Virgin Islands National Park is the historic homeland of the Taino and Kalinago (Island Carib) peoples. Other ancient Natives, whose names we don’t know, lived, hunted, and gathered on these islands more than 2,500 years ago. 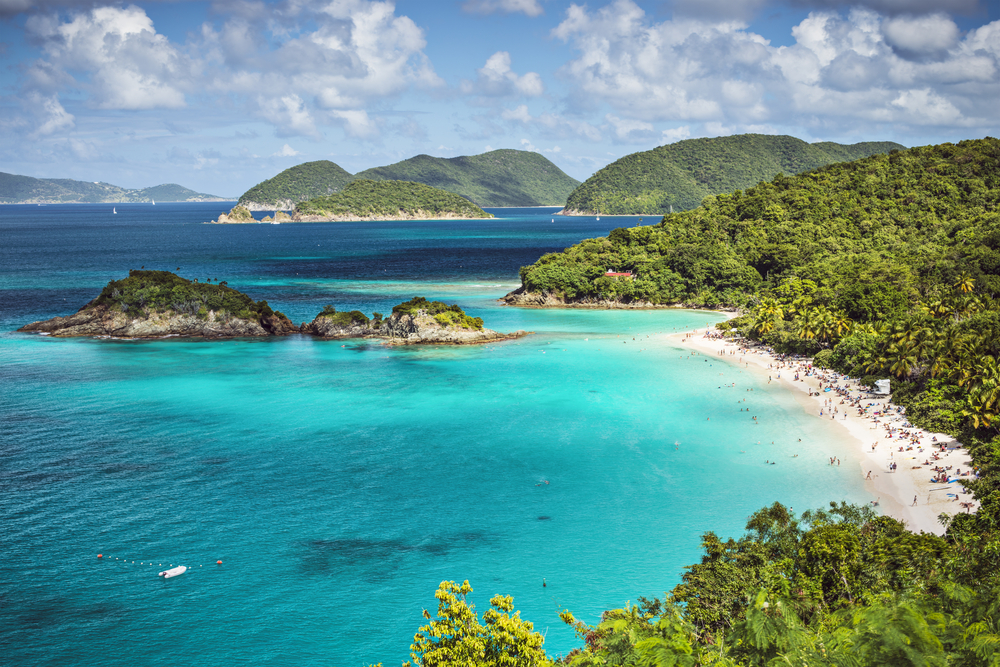 Archeological evidence shows that the first people who ever came to the archipelago we know as the Virgin Islands did so some 2,500-3,000 years ago. Partaking in a nomadic, hunter-gatherer lifestyle, it is likely that these First Peoples were traveling seasonally through the islands in search of good things to eat and craft with. It wasn’t until a little bit later — about 2,500 to 1,300 years ago — that they began to make permanent settlements on the island. (The oldest archeological evidence of one of these settlements can be found close to the beach at Lameshur Bay.)

Then, around 1,000 years ago, a change began to take place: Indigenous peoples today known as the Taino began to immigrate to the island en masse, gathering to form settlements at sites that are still landmarks today, such as Cinnamon Bay, Coral Bay, Caneel Bay, and Lameshur Bay. Taino people lived in large, vibrant villages and used stone tools to help them make the materials they needed to get through life, and also spearheaded agriculture, growing cotton with which to make clothes and sleeping slings. They were cleverly able to cultivate their crops in a way that didn’t demand a lot of time and effort, providing them free time to perform ceremonial rituals and also to play Batu, a ball game in which teams attempt to get the ball past each other without using their hands.

The Kalinago, another band of Caribbean Natives, were dominant throughout the islands — which is part of why they are named for these people today. They shared linguistic similarities with the Taino people and are believed to have followed a polytheistic religious tradition, as well as developing rich and complex music which was accompanied by beautiful, intricate dances.

More information about the Native American history of Virgin Islands National Park — as well as its history of the enslavement and coerced labor of Black people brought to the islands against their will — can be found at the National Park Service website. The on-site visitor center at the park also includes artifacts from the Taino people and more interpretive information and exhibits to help bolster your understanding of these parts of the island’s history.

It’s always imperative to take the time to learn more about the landscapes we inhabit, especially ones as beautiful and serene as Virgin Islands National Park. That calming scenery can make us forget about the hidden parts of a place’s history, which are no less important — and are, in fact, critical to a full and robust understanding of our contextualized place in that landscape.

Of course, it’s not just about adding nuance and depth to our experience of a place — it’s also about paying respect not only to the people who came before us here, but also to the labor of love they provided over the years, leaving this island pristine and available for contemporary visitors. If we don’t want to be the last people to experience this incredible place, it’s up to us to take up the mantle of stewardship and ensure we’re doing everything in our power to preserve it and keep it green for the future. As a visitor, following Leave No Trace principles is a great way to get started.

Leave No Trace is an organization focused on ethical outdoor pursuits, and its seven easy-to-follow principles make it as simple as checking off a list to ensure you’re traveling as lightly on the land as possible. For instance, Leave No Trace tenets include hiking, camping, and building campfires only on durable surfaces, as well as avoiding taking home any natural “souvenirs,” no matter how tempting they may be. We want to keep these islands whole for future generations, who deserve them as much as we do.

Finally, remember that no matter where you are on American soil (or beyond), you’re always stepping on someone else’s Indigenous land — so if you’re curious to learn more about those hidden histories, check out the free web service Native Land. Along with telling you the names of the tribes who are historically and traditionally connected to the countryside or city you’re in, it also links out to contemporary tribal websites and other resources to help you learn as much as possible about them.

Thank you for taking the time to read this guide — and enjoy your time in the stunning, once-in-a-lifetime landscape of Virgin Islands National Park!