At just barely over 110 square miles, Theodore Roosevelt National Park is actually relatively small — and given its location in the west-central part of North Dakota, it’s one that all too many tourists overlook entirely. But those who are exploratory enough to find themselves there are in for a treat: a unique ecosystem captured in the place where the Great Plains meet the Badlands, these lands have long been home to bison, elk and prairie dogs — which is exactly why Roosevelt found himself here back in 1883, hoping to snag a buffalo for himself.

But Roosevelt, of course, was not alone in his thirst for adventure or his drive for game meat — and he was far from the first person to come to this remote and rugged land in search of both. In fact, the human history of the landscape today known as Theodore Roosevelt National Park extends at least 7000 years, and possibly longer: archeologists are still researching this area and the evidence of its ancient inhabitants. Additionally, this landscape has featured prominently in the history and culture of a wide variety of named Native American tribes, including, but not limited to, the Očhéthi Šakówiŋ, Michif Piyii (Métis) Mandan, Hidatsa, and Arikara, Hunkpapa, and Cheyenne peoples.

What follows is a small part of their often-unheard stories. 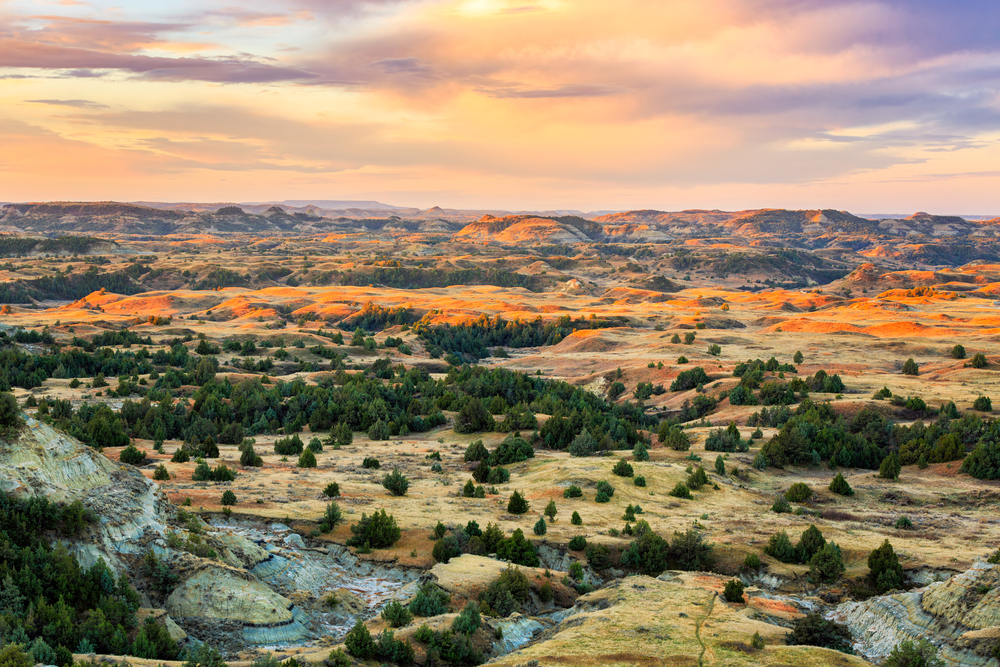 Researchers know that ancient PaleoIndians traveled through, hunted across, and lived in North Dakota as long as 13,000 years ago (circa 11,000 BCE), though evidence that old has not yet been found within the bounds of Theodore Roosevelt National Park, proper. That said, some compelling and truly ancient artifacts and remains have been found within the park’s boundaries, proving beyond a shadow of a doubt that human beings did inhabit these lands some 7,500-2000 years ago at the very least. For instance, a spear point crafted of Knife River flint, which can be traced to the Archaic Period between 5500 BCE and 500 CE, was uncovered on park grounds, as was the tips of throwing spears and pot shards whose specific craftsmanship indicate the touch of people who followed the Plains Woodland tradition, known to live between the years 1-1200 CE.

Additionally, archeological sites such as a rock cairn, multiple stone rings, and several conical lodges built of timber have been found and preserved on the park grounds, all of which date to the Historic Period between Historic Period 1742 and 1880s CE, have also been found within the park boundaries, and two of the lodges are still standing today. Both archeological research and oral tradition tells us that those lodges were used as part of a seasonal eagle trapping practice, and represent a small part of the long ongoing history of human beings existing in symbiotic concord with the land here, utilizing its resources without over-extending them.

From these ancient Native Americans to the named tribes above, as well as many others who traveled through this corridor, these Badlands never offered an excellent opportunity for permanent settlement. Instead, they were a hunting and trading ground, a superhighway where multiple different bands of people met to find the resources they needed and exchange those resources with others. Along with the tribes named above, we know that the Blackfeet, Gros Ventre, Chippewa, Cree, Sioux, and Rocky Boy people all traveled here in the early 19th century, along with untold others whose histories are even more shadowed from the modern imagination.

You can read even more details about the cultural and Indigenous history of Theodore Roosevelt National Park at the National Park Service website. Also feel free to ask a park ranger for any additional details they might be able to offer or events and interpretive exhibits they could steer you toward.

Taking time to learn about the Indigenous history of a given landscape shows an important level of respect that is too often lacking in visitors — after all, we can’t fully respect a place until we understand it, and having an understanding of its full human history is a crucial foundation. Along with reading write-ups like this one and seeking out whatever information is available through the NPS (or whatever bureau oversees the land you’re traveling in), you can always utilize the free web service Native Land to learn even more about whose ancestral grounds you’re occupying. The site even links out to the contemporary tribal website and other resources.

That said, as important as this education is, it’s still only a beginning. We must also take it upon ourselves to continue the stewardship that these First Peoples practiced on and alongside the land. It is only due to their care that these sacred places have survived for us to experience them at all, and if we hope for our children and our children’s children after us to explore these places, it’s up to us to do the work it’ll take to keep them alive and thriving.

There are a variety of ways to make your life more sustainable both at home and on vacation, but for travelers, we recommend checking in with the seven Leave No Trace principles. Easily codified and easier still to follow, these seven principles will help ensure you’re traveling as lightly as you can on the land with only a few easy-to-remember steps. (Check out the Leave No Trace website for full details.)

We hope the additional context and knowledge of the vast and varied Indigenous History of this place will only help you enjoy it all the more — and motivate you to keep it enjoyable for future generations.