While many, many people find themselves heading toward Arizona in search of an amazing national park vacation, relatively few are lucky enough to be entranced by Petrified Forest National Park — it’s simply too easy to overlook when compared to its glorious cousin, the Grand Canyon. Still, this unique and surreal landscape is well worth putting onto your travel itinerary; an ancient, colorful forest preserved for centuries, Petrified Forest is also home to the Rainbow Forest Museum, which offers fascinating paleontology exhibits, as well as many excellent desert hiking trails.

But any place as ancient as this has a history long preceding the western understanding of it birthed by colonialism and westward expansion. Archeological evidence and oral tradition both point to an expansive human history in the area now known as Petrified Forest National Park, which is the traditional homestead of the Zuni, Pueblo, Hopi Tutskwa, and Diné Bikéyah peoples.

Here is a small part of their often-unheard story. 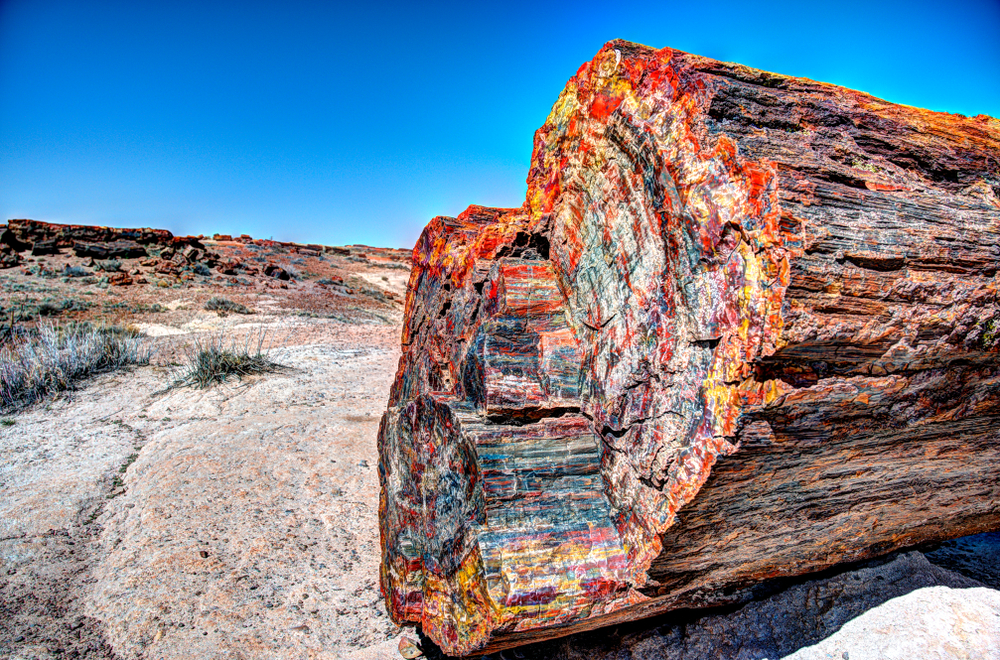 The first evidence of human inhabitation of the American Southwest, including Petrified Forest National Park, dates back to 13,500 BCE, at the end of the last Ice Age. At this time, the southwest looked very different than it does today: rather than a desert landscape, this was a vast and fertile grassland, characterized by cooler temperatures and streaked through with water sources. The Paleo Indians who lived at this time traveled to this part of the country to hunt the massive game animals that roamed here, including mastodons and mammoths. These ancient Indigenous people lived a nomadic hunter-gatherer lifestyle, following herds of animals and the most prolific edible and medicinal plants as those resources’ availability changed seasonally.

Over time, the landscape grew warmer and dryer, starting to resemble the vast, sandy desert we’re familiar with today. After the Paleo Indians, Archaic Indians populated this area, from about the years 6,000 to 500 BCE. Although the shifting climate caused many of the larger game animals to go extinct, these Native Americans had by this point broadened their food sources and knowledge of edible plants, allowing them to sustain themselves while traveling less than their forefathers and foremothers did. They were also able to domesticate some animals and spearhead agricultural practices, which made settling in one place more possible. Stone tools used for grinding food ingredients as well as weaponry from this era of inhabitation have been found by archeologists and researchers.

After the Archaic Indians, Basketmaker people lived in these lands from about 500 BCE to 650 CE — so named for their propensity to weave beautiful and useful baskets, which they used to store food items and other goods. Basketmaker Indians grew corn, squash, and beans, crafted clay pottery, and lived in pit houses whose remains can still be seen in the park today. Sivu’ovi, an archeological site within the park boundaries, consists of the ruins of 47 pit houses as well as multiple storage pits.

After the Basketmaker people, Pueblo Indians began to populate this area, with different periods characterized by cultural and lifestyle changes that occurred as time progressed and the climate continued to change. The Pueblo people created beautiful and well-decorated ceramics whose distinct styles help archeologists parse out the different periods of Pueblo inhabitation. However, by the time Spanish explorers first showed up here in the 1500s, the Pueblo period comes to an end.

In addition to these histories, this land holds cultural and traditional import for each of the tribes outlined above, whose descendants and enrolled members continue to live in the areas surrounding the park and throughout the American southwest and, indeed, the entire country. You can learn more about the prehistoric legacy of Petrified Forest National Park at the National Park Service website, and more about the current tribes whose ancestral roots are here at Native Land — an excellent, free web service you can always use to check whose lands you’re occupying, no matter where you are in America or beyond.

Educating yourself about the First Peoples who so steadfastly provided stewardship to these lands, ensuring our eventual ability to experience and enjoy them for ourselves, is a great first step — but it’s just that, a first step. To truly pay respect to both the land itself and the people who have served as its caretakers for so long, we must also take up the mantle of stewardship for ourselves.

As visitors, that looks a little bit different than it might if we were living off the land permanently (though we can also enact green, sustainable practices at home; after all, no matter where you are, you’re living on the earth). Some of it is mere common sense (for example, not littering), but there are also some excellent resources out there for those looking for a codified, easy-to-reference way to ensure they’re leaving as minimal an impact as possible.

Leave No Trace is a well-known organization promoting outdoor ethics, and it lays out seven principles that will help ensure you and your family leave the places you visit as nice as, or even better than, you found them. Not littering is just the start — but we’ll leave it to LNT to show you the ropes. They’re pretty easy to follow!

We hope this context and history adds some nuance to your experience of Petrified Forest National Park and helps you enjoy your time there all the more. Thanks for taking the time to educate yourself about the Indigenous history of this beautiful national park.