One of the premier destinations of our nation’s absolutely stunning Four Corners region, Mesa Verde National Park stands out from the rest: whereas the Native American and Indigenous history of so many of these epic natural spaces is often unheard or invisible, at this park, it’s the shining star at the center.

Mesa Verde protects and preserves the remains of the Ancestral Pueblo people who lived here hundreds of years ago, finding ways to thrive alongside the earth even in this intense and dynamic landscape. These lands sing with the colorful cultural heritage of some 26 tribes, providing an invaluable way for western visitors to get a window into the past and more fully appreciate the other beautiful gifts of the American southwest in fuller context. 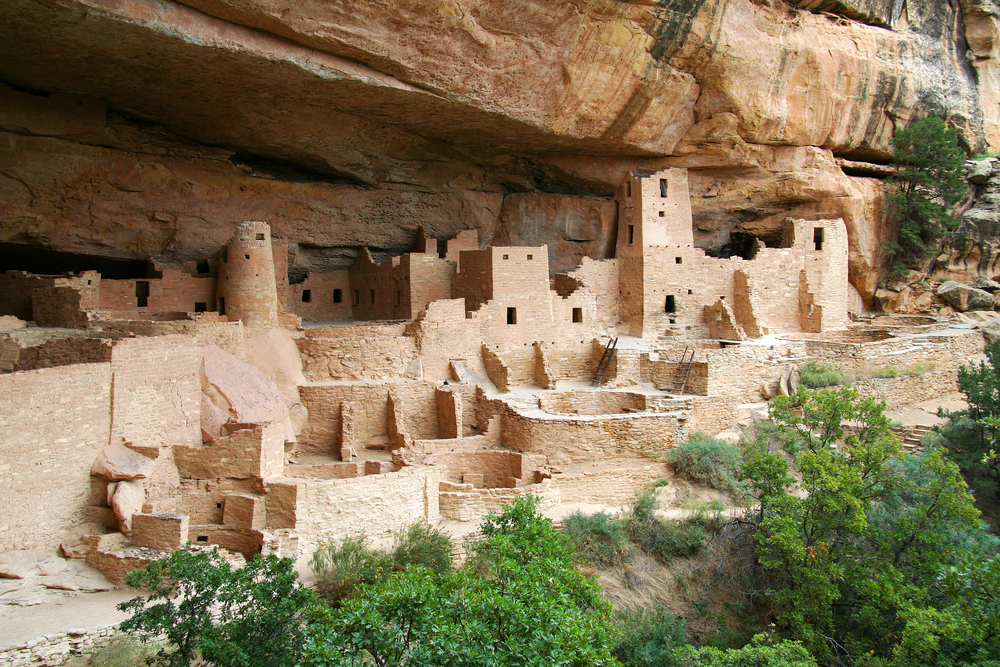 Ancestral Pueblo people first decided to call what is today Mesa Verde home some 1,400 years ago, well before European settlers ever made their way this far west. They lived here for some 700 years, eventually carving out the intricate dwelling structures visitors can still see today in the stunning sandstone surroundings, creating a unique and symbiotic way to utilize the earth’s resources and live alongside its rhythms, rather than railing against them. They were also able to spearhead agricultural practices, making it possible for them to live in more permanent settlements rather than leading a nomadic hunter/gatherer lifestyle.

However, in the late 1200s CE, the people up and left their homes here in the span of only a few generations. Archeologists suggest that this was because of climate change that made it more difficult to grow corn. There was a prolonged drought, a dry season that caused the people to head further south where rain still fell and harvests were more robust and reliable.

That’s far from the end of the story of the Indigenous history of Mesa Verde National Park, however. According to the National Park Service, some 26 contemporarily recognized tribes have historical connections to and affiliations with the park grounds, and one of the most important projects of the Mesa Verde park rangers is to elucidate visitors on the rich Native American and Indigenous history of this place. When you book a guided Cliff Dwelling tour, you’ll be treated to an in-depth lecture that will help you learn more about how the Ancestral Pueblos and other tribal people in this area lived, and even on a self-guided tour, there are plenty of interpretive signs and exhibits that explain some of the key moments and fascinating facts in this history.

Mesa Verde National Park also hosts the Four Corners Lecture Series, which regularly includes enrolled members from the tribes that still live on in this landscape, keeping the history and cultures alive. There are many ways to engage with this rich, vast history during your visit, and we highly recommend you take advantage of as many of them as possible.

If you’ve read this far, you’re obviously interested in learning more about the often unheard Indigenous history of some of our nation’s most precious landscapes — and we’re glad for that. Thank you for taking the time to educate yourself, and be sure to check out additional resources available to you, such as the information available from the National Park Service itself. Additionally, no matter where you are in the United States and beyond, be it wilderness or cityscape, you can learn more about whose ancestral grounds you’re occupying by visiting Native Land, an excellent free web service that also links out to the websites for contemporary tribes, giving you even more opportunities for learning and education.

But bear in mind that self-education is really just the first step in the project that is paying full respects to the landscapes we walk through. The Native American and Indigenous peoples who have lived here for centuries knew how to care for and steward the land in such a way that these lands are still here for us to enjoy today — and that means the onus is on us to carry forth that mission.

As contemporary visitors, one of the best ways to ensure we’re minimally impacting the lands we stand on is by using Leave No Trace principles, such as packing out all the garbage you pack in, leaving all natural artifacts where you find them (as tempting as it might be to take home a “souvenir”), and traveling and camping only on durable surfaces. Keeping a respectful distance from wildlife and treating other visitors with courtesy and thoughtfulness are also part of the Leave No Trace ethic, not to mention good for you, the animals, and the people around you.

With all of this context in your back pocket, enjoy your trip to Mesa Verde National Park: truly a window into the past and an opportunity to understand your place in the overall context of this country’s long and storied history.