The vastest known cave system in the world — and one whose full depths and reaches are still undiscovered — Mammoth Cave National Park is truly a bucket list item for any outdoor lover. Its well decorated caverns are covered in fascinating limestone decorations forged over centuries by the slow but steady drip-drip-drip of water and the passage of immense, unfathomable amounts of time.

It’s no surprise, given the sheer majesty of this natural wonder, that more than 2 million people have made their way to the caves on certain years to partake in guided ranger tours that travel deep into this underground mystery. But this cave has drawn human beings into its depths for far longer than the few centuries it’s been since European settler John Houchin first discovered the cave by accident in 1790. Native Americans have known about and been actively exploring this cave for some 5,000 years, according to archeological evidence, and traveled upon and utilized the resources of the area surrounding the caves for more than double that time — some 12,000 years and counting.

The above-and-underground expanse we now call Mammoth Cave National Park rests on the ancestral lands of Cherokee, Shawnee, and Chickasaw tribes, and has been cared for and stewarded by those people and others since time immemorial. 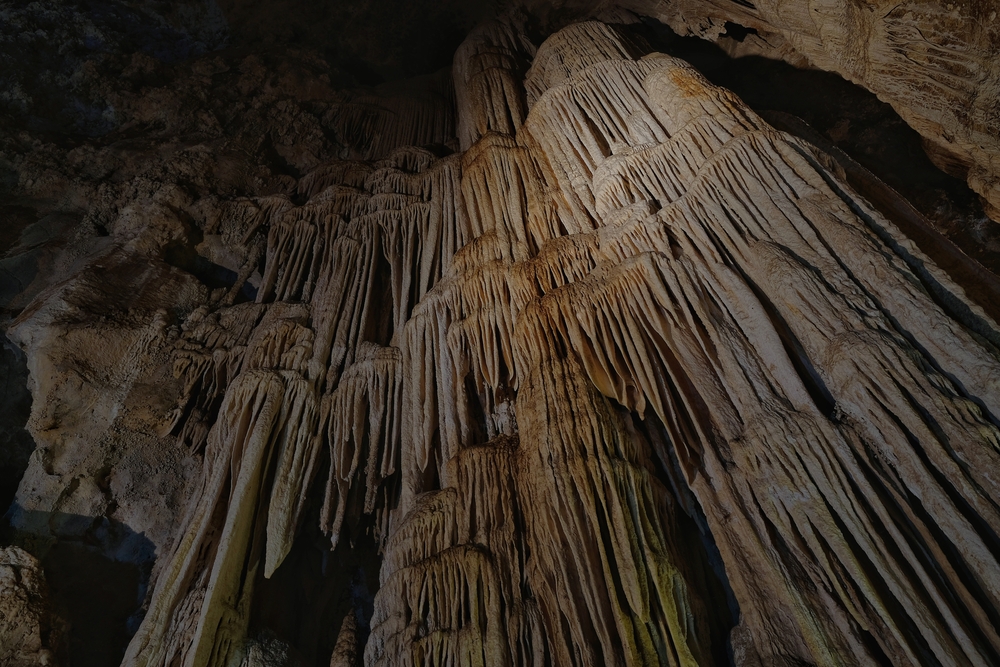 The first human inhabitation of this area occurred around the year 10,000 BCE, when prehistoric peoples were living in and traveling through the woodlands and plains of what is today called Kentucky. They were able to utilize the fertile river valleys that stream through the state to help sustain themselves, while also continually following the supply of edible plants and animals as part of their nomadic, hunter-gatherer lifestyle.

Around approximately 3000 BCE, those prehistoric peoples discovered the cave, which they sometimes used for shelter. Mummified bodies have also been found in the caves, suggesting that ancient Natives saw it as a sacred place suitable for the eternal rest of their dead. By 1200 BCE, these Indigeous peoples were mining materials such as gypsum, mirabilite, and epsomite from the cave using mussel shells they harvested from the nearby Green River. Archeologists are still researching what those materials might have been used for, since they’re highly dissolvable and don’t tend to last too long outside of the cave environment, but they suspect the ingredients were incorporated into medicine, agricultural practices, trade, and possibly used for ritualistic ceremonies. Eventually, around the year 200 BCE, such mining practices stopped.

By the time western settlers and colonizers arrived thousands of years later, this part of the country was under the control of bands of Cherokee, Shawnee, and Chickasaw peoples. The descendants of these Natives still populate the area surrounding the caves, and according to the National Park Service website, all of the following contemporarily recognized tribes have historical affiliations with the land:

Among the cave tours available, the Historic Tour provides more information about some of the passages and caverns that have been used for thousands of years by Native Americans and Indigenous peoples.

Learning about the ancient cultures that precede our own is one of the best ways to ejoy a fully contextualized visit to a wilderness landscape. But no matter where you are in America — and beyond — unless you have Native American heritage yourself, you’re necessarily standing in the middle of someone else’s ongoing, and often unheard, story.

Along with reading write-ups like this one and taking advantage of any interpretive signage, exhibits, or events offered by the National Park Service and other organizations, you can always check out Native Land, an excellent free web service that will help you learn more about whose ancestral lands you’re occupying. The site also links out to the websites of the contemporary tribes so you can learn even more about them.

However, educating ourselves on the Indigenous history of a place is only one small part of the overall project of paying respect to the land (and the people who have kept it alive and well for us for so many generations). It’s also up to us to carry forward the tradition of stewardship and ensure we travel upon these landscapes with as little impact as possible, in order to ensure those lands stay safe for our own children (and their children’s children after them). While common sense goes a long way toward this end, a great resource for a quickly referenceable, codified set of rules is Leave No Trace, whose seven principles will ensure you leave every landscape you visit as beautiful as, or perhaps even better, than you found it.

All that said: enjoy your trip to Mammoth Cave National Park, truly one of the wonders of our natural world. Just don’t forget to send a nod toward the people who ensured it was still possible for you to visit it today, and do your part to perpetuate the cycle.