Considered a national lakeshore since 1966, but one of the newest national parks with an official designation dating only to 2019, Indiana Sand Dunes National Park is a stunning and unique destination along the southern shore of Lake Michigan — one that draws some 2 million or so visitors per year to wander through its towering heaps of sand and bask in the sunshine as it reflects off the gentle waters.

With more than 15 miles of gorgeous beach to build sand castles upon, not to mention its ample hiking, biking, horseback riding, fishing, and other water sports options, it’s no surprise that Indiana Sand Dunes serves as such a common midwestern gathering place. But as contemporary western visitors to this stunning shoreline, we must remember that these lands were not always under our control.

What is today called Indiana Sand Dunes National Park rests on the historic, ancestral grounds of the Peoria, Myaamia, Kiikaapoi (Kickapoo), Kaskaskia, and Bodéwadmiakiwen (Potawatomi) tribes. Many other Native Americans have traveled through or otherwise inhabited these lands before western settlers got to them. Here is a little piece of their too-often untold story. 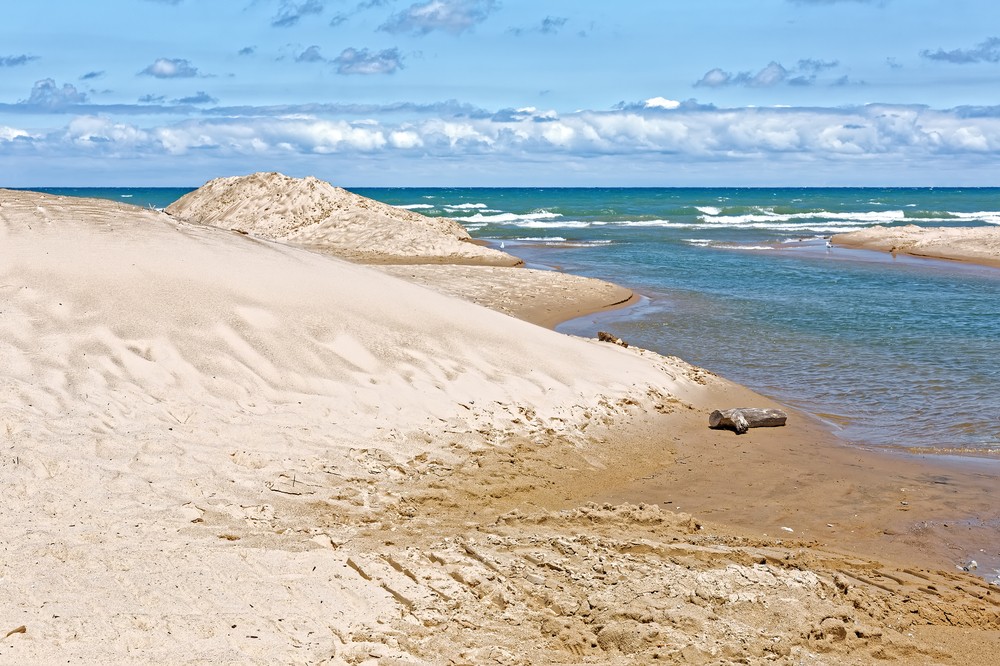 Evidence of human inhabitation of the southern shore of what is today called Lake Michigan dates back some 15,000 years, when ancient Native Americans made their way here as the glaciers retreated at the end of the last Ice Age. Early Paleo Indians are the first group that archeologists have positively identified in the area, though the dunes themselves have not offered much in the way of evidence, ruins, or remains.

Nearby to the park, though, ancient mounds — earthen constructions that were probably used for ceremonial and cultural reasons — abound across northwestern Indiana, and indicate that Native Americans lived in these areas long-term in thriving permanent settlements. Many of these are part of the Goodall Focus, which is itself part of a cultural grouping known as the Hopewell People — a group of tribes who celebrated life with similar rituals and ways of being.

By the time western settlers, including French fur traders, began to arrive in this part of what is today known as Indiana, they encountered some of the tribes listed above. Many of these were part of what was known as the Iroquois Confederation, a band of tribes who lived throughout the Mississippi River Valley and banded together to help each other cultivate the land and thrive and also warring against other, enemy tribes. The dunes were a seasonal hunting ground, and as settlers funnelled in, Native Americans were displaced from this area, although it was long-standing in their history and the history of other ancient Indigenous peoples.

Whenever visiting a national park — or any wilderness — in the United States, as westerners, we’re always occupying someone else’s ancestral homeland, unless we have Native American heritage ourselves. Learning more about these cultures that preceded us is an important way to begin the process of fully understanding our situational context on the land, and paying the full extent of our respect to it.

The National Park Service offers some information about the Native Americans who originally inhabited the lands they now preserve and care for, through interpretive signage and exhibits in visitors centers and beyond. Additionally, write-ups like this one are a helpful window into the world as it was before us, and you can always look up whose ancestral lands you’re standing on by using Native Land, an excellent service available for free online.

But learning about the Indigenous history of a place is only the first step. To truly pay respect to both the land and the peoples who have so long stewarded it, we have to commit to caring for it ourselves, helping to ensure it’ll still be beautiful and viable for future generations to experience and enjoy. Some of this work is common sense: take nothing but photos; pack out any garbage you pack in. But for a great way to codify an attempt to move minimally upon the land, we recommend checking out the seven Leave No Trace principles, which offer easy-to-enact guidelines that will help ensure you leave a place just as good as — or even better than — you found it.

Enjoy your trip to Indiana Sand Dunes National Park — and don’t forget the ancient context of this hallowed and unique landscape. We hope the added nuance makes the experience that much more powerful for you and your family.