Encompassing most of the eastern half of the island of Maui and named for a stunning, dormant volcano whose towering cinder cone creates an otherworldly landscape, Haleakalā National Park is well worth the trip to Hawaii all on its own — not to mention all the other lush beauty the Island State has to offer.

But like the rest of the Hawaiian islands, Haleakalā National Park has a rich history of Indigenous and First Peoples who populate this island long before westerners were able to quickly and easily fly out to them from the mainland. Polynesians, from whom Native Hawaiians today are descended, first made their way to these islands more than a thousand years ago, braving high seas in hand-crafted canoes and learning how to work with the unique beauty and bounty of these lands to survive and thrive. 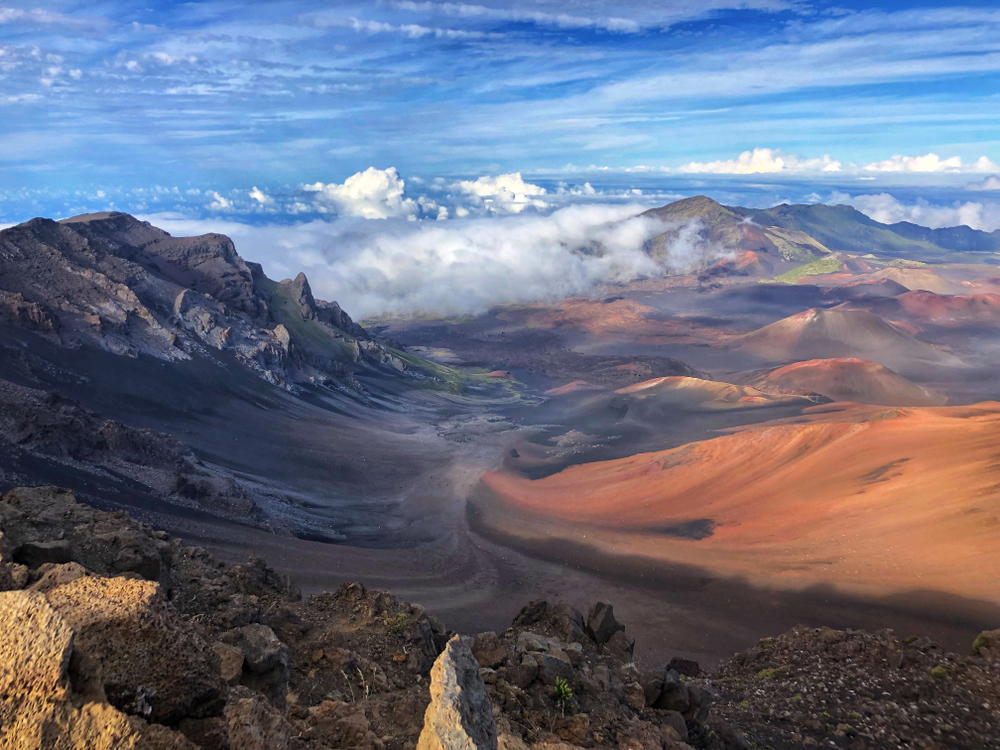 Polynesians first made their way to the islands of Hawaii — including Maui, where Haleakalā National Park sits — back in about 1000 to 1200 CE. They traveled from the area now known as the Marquesas Islands, or French Polynesia, in double-hulled canoes called wa’a, which they successfully navigated over 2,000 miles of ocean.

These Polynesian people were able to navigate using naturally occurring phenomena, such as the moon and stars, ocean currents, the migratory patterns of birds and whales, and even rainbows to meet their destinations. They brought many different kinds of plants and animals along with them to help them establish their new homes: pigs, dogs, chickens, taro and sweet potato roots, coconut seeds and saplings as well as bananas, sugar cane, and many other types of plants for food and medicine both. They created advanced social hierarchical structures, which basically resembled a caste system, with chiefs, or Ali’i, at the top, kahuna, or spiritual professionals, at the next tier, maka ‘ainana, or common folks, below that, and kauwa, outcasts and slaves, at the bottom.

A strict set of laws, known as kanawai, was put into effect across the islands. One example: men and women ate separately, and women were forbidden from eating certain types of foods such as pork, bananas, and coconut. The islands were also separated out into political districts known as moku, which were further separated into land sections called ahupua’a.

As you can see, this was anything but a “savage” or unestablished society. The Native Hawaiians thrived and created beautiful and elaborate rituals and cultural practices, which are still continued by their descendents today. These lands have long been held sacred by these people, and continue to be considered sacred today — so it’s always important to pay attention to local restrictions regarding parts of the islands considered off-limits to outsiders.

Given its vast distance from the American mainland or any other large landmass, when visiting Hawaii, we are necessarily serious outsiders — unless we have Native Hawaiian ancestry ourselves. Learning about the rich and vibrant culture that was established centuries before western settlers ever even knew the islands existed is one important way to make a start toward paying respects to the land — but it’s far from the only step.

Along with education, visitors must also take it upon themselves to respect both the land and the people who have served as its historic stewards by continuing in their practices of caring for the land. As modern visitors, a good way to go about this is to follow the seven Leave No Trace principles, which include traveling and camping only on durable surfaces, packing out all the garbage you pack in, and creating campfires only in designated areas that have already sustained campfire damage.

Learning more about the Indigenous Peoples who came before us to these places is a way into the wider world of understanding our context, historically and culturally, wherever we may be standing in the United States (and beyond). You can always use the Native Land tool to see whose ancestral grounds you’re occupying at any given moment, and then go on to take the opportunity to learn more about those people specifically.

Finally, enjoy your time in Hawaii! It is an honor to the people who have cultivated and cared for this land for eons to understand exactly how special it really is — and to do our part to continue to keep it habitable and whole for many future generations to enjoy.