Grand Teton National Park is so much more than Yellowstone’s baby brother — though unfortunately, some visitors to Wyoming do tend to see it that way. While Yellowstone receives some 4 million or so visitors each year, Grand Teton sees more on the order of 3-3.5 million — which, of course, is still no small feat.

And in fact, these spiring, snow-capped peaks have drawn human visitors and inhabitants since time immemorial. While first “discovered” and settled by European immigrants in the late 1800s, evidence of human inhabitants here dates back to over 11,000 years ago — which is to say Indigenous Peoples were certainly here first.

While many, many tribes have lived in and traveled through the landscape of Grand Teton National Park, at the time of European settlement, the area was under Shoshone, Bannock, Blackfoot, Crow, Flathead, Gros Ventre, and Nez Perce stewardship. These tribes came to the Grand Tetons to hunt and gather, as well as to sit in awe of the mystery of the mountains, which then as now are considered a sacred space to many Native Americans. 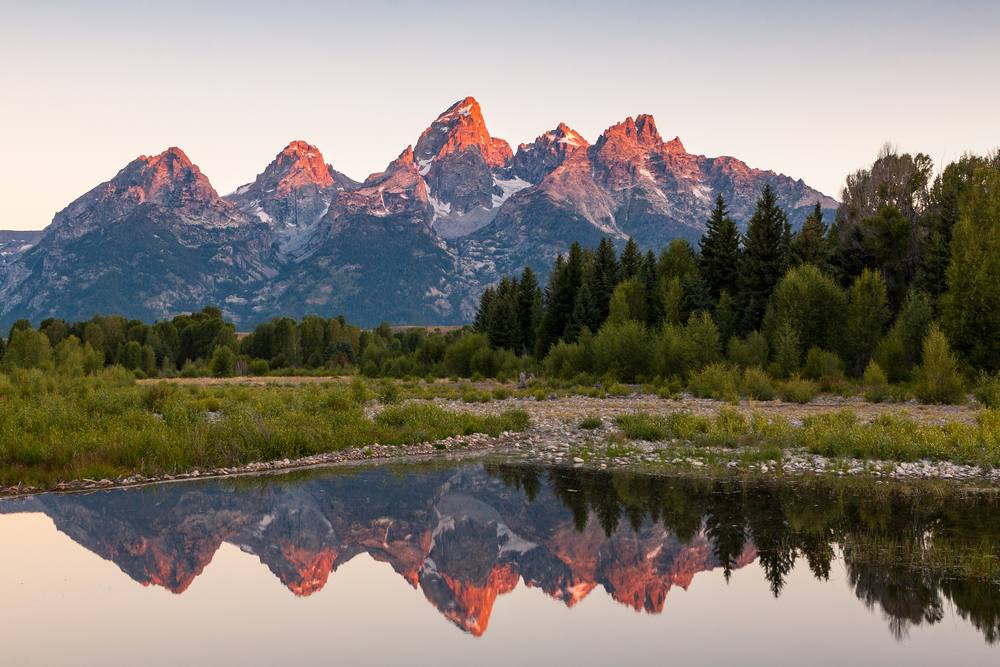 The towering majesty of the mountain landscape that we today call Grand Teton National Park served as a touchstone for many Native American tribes, and unsurprisingly. The mountains called out across the plains as a kind of gathering place, inspiring people to look up and into their spiritual lives.

Additionally, during the spring and summer months, this landscape is rich in edible and medicinal plants, which Indigenous peoples knew how to use to full effect. Wyoming is also home to game animals like bison, deer, elk, and moose, as well as smaller creatures that Native Americans used to fill out their hunter-gatherer diet. They roasted camas roots in underground ovens and would often leave the landscape of the park for more southerly climes when the winter came, thus enacting a nomadic lifestyle. These tribes are still alive and thriving in Wyoming and beyond, and maintain many of their cultural traditions in the modern day.

As people who are enthusiastic about traveling — about seeing the land — it’s our responsibility to ensure that we’re also paying respect to the land and keeping it healthy and whole for future generations to enjoy. The Indigenous Peoples who came before us set an important and often-overlooked precedent, living in symbiosis with the plants, animals, and ecosystems around them; as contemporary visitors who are not Native to this place, the onus is on us to find ways to continue that tradition.

Education is a great start — so thanks for reading this write-up, and you can learn more about the American Indian history of Grand Teton National Park (and any other national park you might find yourself in) both at the park itself, in visitors centers and other interpretive displays, and on the park website. Additionally, Native Land is a great tool for learning whose ancestral grounds you’re inhabiting, no matter where you are in America (and across the Earth for that matter).

Finally, we always encourage RVshare renters and rentees to pay attention to and participate in Leave No Trace principles, which are an easy few steps to follow to ensure the health and wellbeing of the land for generations to come. By acting with compassion and attention, we can affect change on this changing world of ours — and preserve it so that others may enjoy it as we do.