It’s a little counterintuitive: one of the most stunning untouched natural wonderlands left in the United States exists right off the coast of one of the most highly populated and well-traveled tracts. But Channel Islands National Park is nothing if not an enigma: this gorgeous set of eight islands, ringing in at just under a quarter of a million acres in area, see some of the lowest visitation rates among the national parks as a whole, with less than half a million visitors each year.

While the present-day landscape is inviting for sheer beauty alone, these islands also boast a rich and complex background that will fascinate even those who typically nod off in museums and history classes. For starter: the four northernmost islands used to be not a handful of separate land masses, but one large “mega-island.” Even more impressive: the fact that ancient human beings inhabited this place as many as 13,000 years ago. 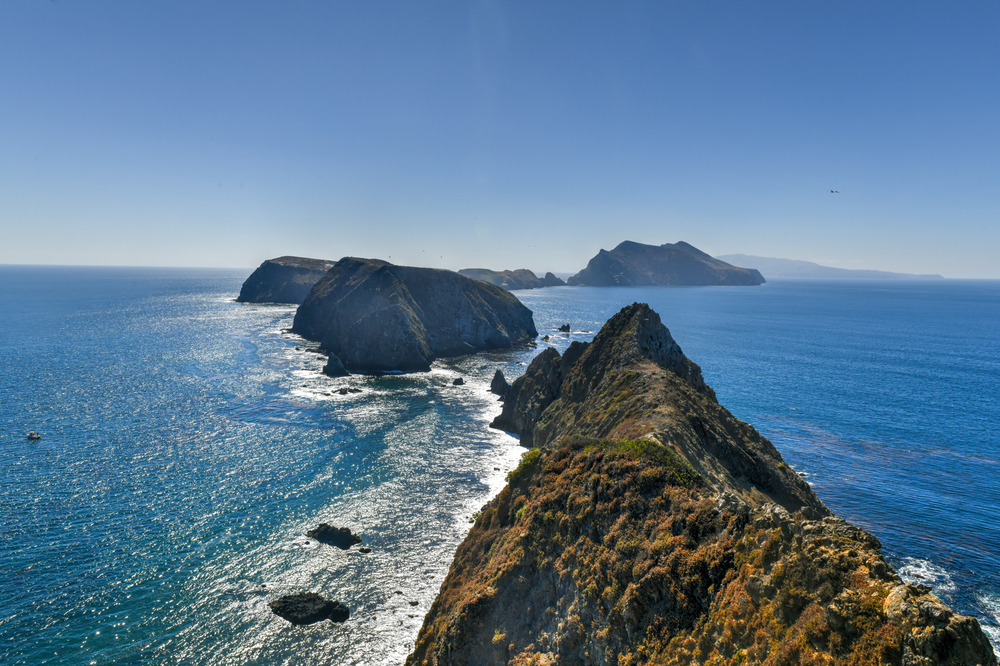 The earliest evidence of human occupation of the Channel Islands is a tiny fragment of a human femur bone, which was discovered on Santa Rosa Island back in 1959. Bone protein analysis and carbon dating revealed the staggering age of the remains, which give us the date of what is today known as the Arlington Springs Man, who lived on these islands around the year 11,000 BCE.

This was the end of the Pleistocene era, during which the most recent ice age happened, and at the time, the climate on these islands was much cooler than it is today. It was also likely inhabited by ancient megafauna, like mammoths. Although the northernmost islands were united, the Channel Islands were still a good ways off the California mainland as they are today, which means that these ancient Native Americans must have used hand-crafted boats to reach their destination.

Different tribes and bands of Native Americans continued to inhabit these islands as time went on and the earth evolved and changed. There is evidence on San Miguel Island of continuous human inhabitation from 11,000 to 8,000 years ago, for example. These Indigenous peoples were primarily Chumash, whose name comes from a Native American word meaning makers of shell bead money. As this moniker suggests, these people crafted bead-currency, or ‘Achum, from the plentiful shells they found on these islands. They traveled to the mainland using plank-canoes, or tomols, made from redwood trees, and used this currency to trade for manufactured goods and other resources found in the mainland villages.

This vibrant Native American culture thrived on these islands, with almost 150 ancient historic village sites having been identified by archeologists at the time of this writing. Tomol crossings of the channel are still conducted today by the Chumash Maritime Association, in partnership with the Channel Islands National Marine Sanctuary and the national park itself, to honor the longstanding tradition and vibrant human history of this place.

Those of us lucky enough to call America home, or even just to visit it, are always walking around on lands that have histories that long outdate us. Because of the violent history of colonization and white settlement, these histories too often go unheard.

Reading up on the Indigenous history of wildernesses and cities you visit and inhabit is an important first step toward garnering a full understanding of your position in the full historical context of a place. Native Land is a great resource for learning whose ancestral lands you’re walking on, and the National Park Service and other organizations have more history for you to dive into during your visit.

Along with self-education, continuing the stewardship of the land started by these ancient people is one of the most tangible tools we have to show our respect for both their history and the earth itself. We encourage all campers and visitors to practice Leave No Trace principles, which can be read about in-depth here — but basically boil down to leaving a place as you found it (or, ideally, even better than you found it) so as to preserve it for future generations. For example, LNT tenets include packing out all trash you pack in and walking or camping only on durable surfaces so as not to disturb the growth of local flora or behaviors of local wildlife. You can also work to respect wildlife in other ways (such as by using bear boxes when camping in bear habitats) and minimizing campfire impacts.

We hope your visit to Channel Islands National Park is made even richer and more interesting with this important human historical context. After all, when you step foot on these hallowed lands, you’re participating in a much longer human story.