Most outdoorsy, explorer-type folks — like the people who are likely to be reading this blog post 😉 — already know that Utah is home to some absolutely incredible landscapes, as rich with cultural and historical context as sheer natural beauty. Canyonlands National Park, in fact, is the largest of the five national parks Utah boasts, with hundreds of thousands of visitors arriving to spread across its 520 square mile spread each year.

Of course, while the sheer beauty of this part of southeastern Utah is plain to see for anyone who drives through, the longstanding and beautiful histories are a little less apparent, but no less rewarding to learn about.

What is today known as Canyonlands National Park is the ancestral land of Indigenous peoples including the Ute, Southern Paiute, and Pueblo peoples. The Indigenous story of Canyonlands begins long before European men named it such — indeed, before they ever set foot in this jaw-dropping desert. 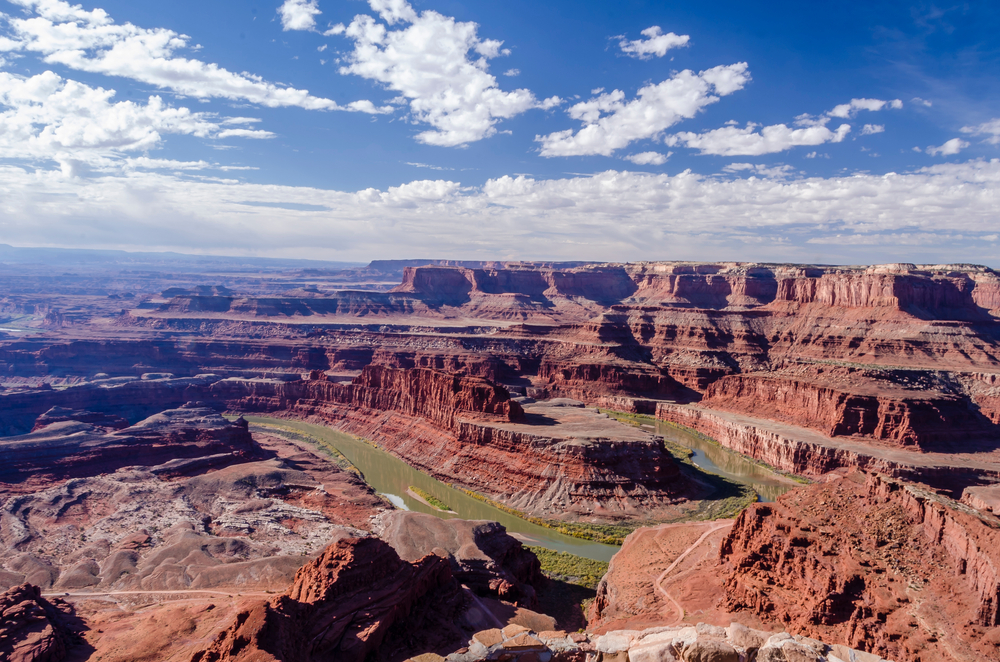 Extended family groups of Native Americans first occupied these lands some 10,000 years ago, around the year 8,000 BCE at the end of the last ice age. Nomadic by nature and roaming the land to follow game and seasonal wild plants, the territory now known as Canyonlands was one stop in their seasonal cycle, as is evidenced by the pictographs and petroglyphs that can still be seen in the park today.

Over the course of time, as the earth evolved and Native Americans began to come in contact with foreign settlers, their ways of life changed. By the Common Era — about 2,000 years ago — many Native peoples had taken up agriculture, and were farming domesticated versions of corn, beans, and squash while also hunting smaller game and gathering local edible flora to round out their diet and obtain other necessary materials for life. These were the Fremont and Pueblo peoples, whose settlements at this time grew and developed into more permanent villages with denser populations.

These people thrived in Canyonlands until approximately 1200 CE, at which point a drought struck the land — though Native American elders also describe the consequential migration as a long-fated occurrence they were destined for. Many of these Pueblo Indians migrated south into present-day Arizona and New Mexico at this time, and many of their descendents still live in those states.

The Fremont people, on the other hand, took a different tack: as the climate and water availability changed, they returned to their hunter-gatherer roots, and still other peoples, such as the Diné (also known as Navajo), migrated to the four corners area from further north.

Canyonlands and the landscape of Utah figure largely in the oral and lived histories of many different Native American and Indigenous peoples, and many parts of the park hold special significance and should be treated as sacred spaces by visitors. For example, Cave Spring, which is located in The Needles, is considered a sacred place: it was a rare source of life-sustaining water in a harsh desert environment. Visitors should approach and treat such areas with the kind of respect one would offer in any western place of worship.

As contemporary visitors, it can feel like there’s not much we can do to acknowledge the vast and storied history of the landscapes we visit and live in — but fortunately, that’s not true. Reading about the cultures and experiences of the First Peoples who lived in and stewarded these lands before us is a great start, and you can always check whose ancestral lands you’re standing on at the website Native Land.

An even more powerful way to pay respect to the people who have cared for these lands since time immemorial: becoming a good caretaker yourself by following Leave No Trace principles. Simple to follow, these easy steps help ensure that the land stays healthy and thrives for future generations to explore, enjoy, and find themselves in long after we’ve gone. That’s the gift these Indigenous peoples gave us — so it makes sense for us to pay it forward.