Perhaps the most iconic landscape in South Dakota — although an argument could be made for Mount Rushmore — Badlands National Park draws some one million visitors to its jagged, alien landscape each year. Hot and dry in the summer and dozens of degrees below zero come wintertime, these lands have always been characterized by intensity and harshness: it’s right there in the name. Badlands.

The French fur trappers who traipsed around this area in the late 1700s called it the same in their language: les mauvaises terres a traveser (bad lands to travel). But they weren’t the first people to coin the moniker, nor to note the unique characteristics of the landscape.

The history of Badlands National Park begins long before the French, or any white people, ever took its name in their mouths. In fact, the story begins 12,000 years ago. 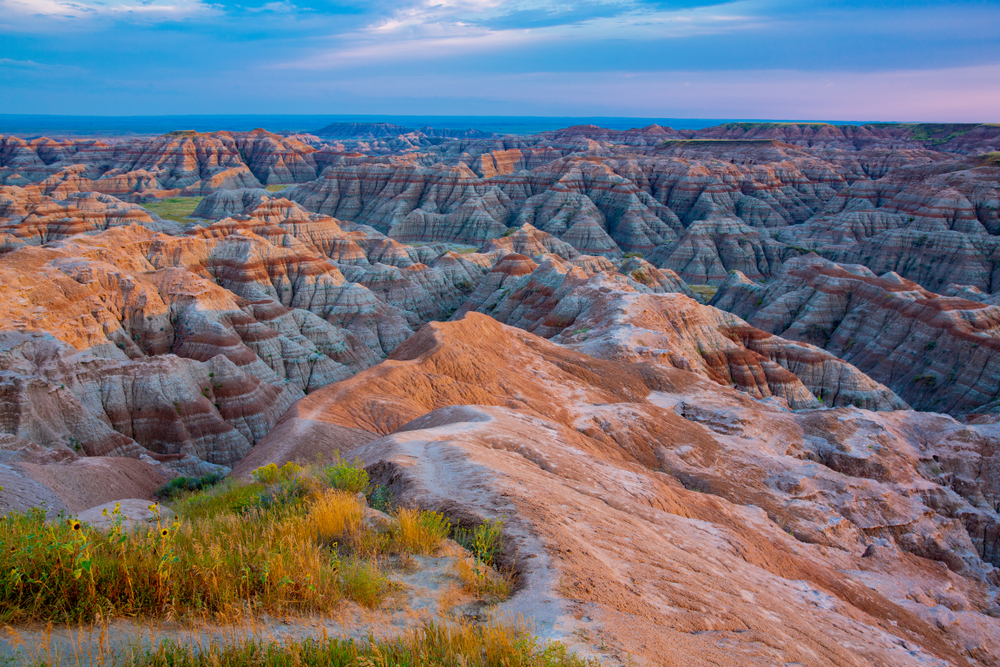 Archeologists have long been studying the stretch of land currently known as Badlands National Park, and they’ve found evidence that Native Americans braved the location as a temporary camp for hunting trips since time immemorial. Ancient charcoal piles and the burns they’ve left upon the rock tell us that campfires burned here, offering warmth and brightness in harsh nights long, long since past.

In fact, more than 300 archeological sites have been documented within the park, and although the oldest dates back 12,000 years ago, they span centuries. Along with campfires, these archaeological areas include bison bone caches, where Indigenous peoples likely butchered their catch, and quarry areas, where the land wears evidence of being taken and shaped into stone edged tools.

But even all those thousands of years ago, the Badlands were in many ways the same — and this inhospitable landscape was not a good one to make a permanent home in. These ancient remains suggest instead that these lands were used for only temporary hunting camps, where brave hunters would huddle, hoping to bring game back to their families in permanent settlements elsewhere.

While many Native American tribes likely passed through these lands, the most recent archeological sites in the park have been identified as Arikara and Oglala Lakota, whose people can still be found in North and South Dakota today. And as far as the name goes, the French have the Lakota people and their beautiful language to thank for it: they’re the ones who first called this place mako sica, whose literal translation is “bad lands.”

When visiting Badlands National Park, you’re participating in a long and storied history that stretches back further than any contemporary person can fully grasp. Thus, it’s important to pay respect to this ancient landscape and its stewards, and to do what we can to keep it alive and thriving for future generations.

Reading about the archeological and cultural history of this place, both on blog posts like this one and on the NPS website, is an important first step. You can also check in at Native Land to learn exactly whose occupied land you’re inhabiting, both in and out of the national parks.

Finally, as always, we urge you to familiarize yourself with, and respect, the tenets of Leave No Trace. These simple practices can help us preserve these hallowed spaces for many future generations to discover.