Those who aren’t well-versed in RV systems might be perplexed to know that a standard motorhome requires two batteries. The first is a standard starter battery, as in a typical car, used to give the engine a brief but powerful jolt to help it start. The other kind of RV battery goes by many names — the deep cycle battery, the coach battery, or the RV house battery.

RV house batteries expel less energy (measured in amps) at once, but must last for a longer period of time, as they’re responsible for routing electricity to an RV’s cabin. They power kitchen appliances, lights and more when the RV isn’t running. A well-made deep cycle battery will last far longer than a starter battery — up to three or four times as long, in fact — meaning you shouldn’t have to replace one very often.

There are a few things you can do as an owner to maximize the life expectancy of your deep cycle battery. To extend the lifespan, you should cycle the battery down to 50 percent discharge before recharging it every time. Rather than recharging the battery as soon as it’s down to 20 percent of its charge, as this will actually burn out quicker than if it’s allowed to discharge more before being replenished. Effectively, this means you’ll never want to make use of a battery’s full amp-hours (see below). This rating is essentially cut in half, if you want to maximize the battery’s lifespan. The sooner you can recharge a battery, the better.

This relates to undercharging as well, wherein a battery isn’t recharged to 100% percent before being unplugged and put into action again. Undercharging will further age your house battery, as if causes sulfation — when the sulfate material to crystallize on the discharged portions of the battery plates and therefore become effectively useless. The same phenomenon occurs when a battery is discharged for long periods of time. Just as undercharging can contribute to battery failure, so can overcharging. It causes greater water loss and corrosion of the plates. Save yourself the money by simply being conscious of these issues and treating your battery right.

This raises another question: how can you divine the charge of your battery? The truth is, there aren’t many good ways to know, except to be aware of your battery’s power and how many hours it’s been in use. RVers Online, however, summarizes a few more precise (though still somewhat ineffective) ways to figure it out:

The only true way to know state of charge of a battery is to check its specific gravity. But very few RVers do this. Another fairly complicated way is to buy a meter for several hundred dollars that will measure that for you. The other way is to go by battery voltage. Preferred method is digital display, versus analog . The idiot lights (red, amber & green) that come with most new rigs actually mean very little. The key to voltage checks is getting the battery “at rest”. Yet that’s virtually impossible unless you completely disconnect the battery… [The] best time is first thing in the morning when you’ve not been plugged in. 12.65V is “full”; 12.47V is 75%; 12.24V is 50% 12.06V is 25%; 11.89V is just about zero.

Though both starter and house batteries tend to run on 12 volts (or else pair 6 volt batteries together), house batteries are designed to expel most of their charge in one sitting before being recharged. For this reason, they’re designed with very thick plates that differentiate them from starters. On the rare occasions you’ll need to, there are several factors to consider in purchasing a new one. 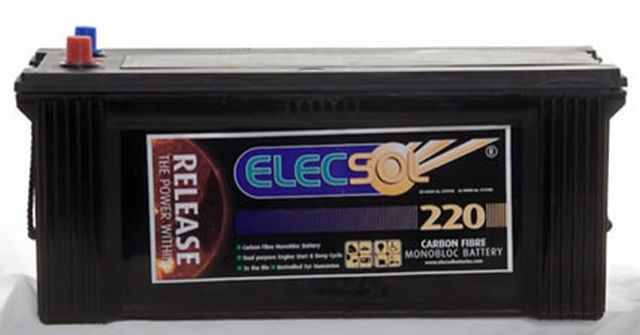 Obviously, you’ll want the most power for the least cost in any battery. For house batteries, the power is measured in either amp-hours (AH) or reserve capacity (RC). AH refers to how many amps the battery will put out over a 20-hour period, while RC refers to how many minutes the battery can support a 20 amp output. RVServices.Koa.com elucidates how these measurements work in greater detail:

In other words a battery that can deliver 5 amps for 20 hours before it is discharged would have a 100 amp hour rating 5 Amps X 20 Hours = 100Amp Hours. This same battery can deliver 20 amps for 5 hours 20 Amps X 5 Hours = 100 Amp Hours. Reserve Capacity rating (RC) is the number of minutes at 80 degrees F that the battery can deliver 25 amps until it drops below 10.5 volts. To figure the amp hour rating you can multiply the RC rating by 60 percent.

If you’re having trouble remembering how these two measurements works while considering your purchase, don’t sweat it too much. As DIY RV explains:

You don’t have to understand the method of measuring to know that “more is better”, so a battery with a larger AH or RC rating is better (more capacity) than a smaller one. Unfortunately, there is no meaningful way to compare AH and RC values, so make sure you compare apples to apples. 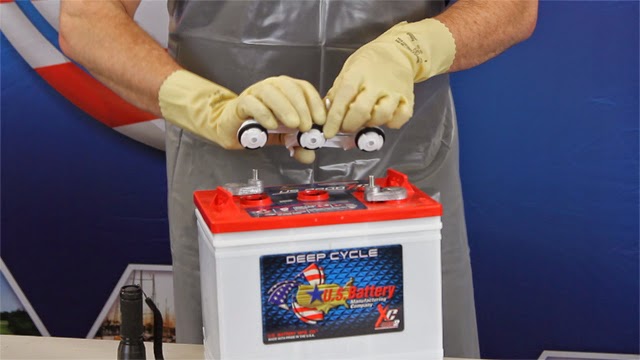 There are two major configurations of deep cycle batteries. These are flooded lead acid and valve regulated lead acid batteries. The former is the more common type, wherein the lead is bathed in a solution of water and acid. They lose some of this liquid with each use, so you’ll need to refill them with water every now and then. Some come with removable caps to allow you to look inside the battery and perform maintenance, while others are non-serviceable.

Valve regulated lead acid (VRLA) batteries, on the other hand, will almost never require maintenance anyway. They have “the electrolyte…suspended in either a gel or a fiberglass-mat. Gel cell [VRLA] batteries use battery acid in the form of a gel.” These batteries are therefore leak proof, ideal for use in water vehicles and for other marine applications, but less so for RV use. Basically, they don’t recharge as well as flooded lead acid batteries. The process to recharge is much slower, and if they are overcharged, it can cause permanent damage to the battery’s cells.

However, gel type batteries are being largely replaced by another kind of VRLA incorporating a fiber glass Absorbed Glass Mat (AGM). These AGM batteries use the sealed fiber glass sponge to reduce the loss of electrolyte while charging. These are a good choice as well, but generally suffer the same drawbacks as gel-types and may be harder to find than flooded lead acid batteries.

The larger the size of a house battery, the greater the AH and RC — at least in most cases. Often, they’re measured in group sizes, including 24, 27 and 31. This helpful chart from BatteryStuff.com tracks the sizes of individual batteries, as well as their amp-hours and other valuable information. RV Services further summarizes a few general rules about the correlation between size and power of house batteries:

You can use two 12-volt 24 group batteries wired in parallel that provides 140 to 170 AH. Parallel wiring increases amp hours but not voltage.

If you have the room, you can do what a lot of RVers do and switch from the standard 12-volt batteries to two of the larger 6-volt golf cart batteries. These pairs of 6-volt batteries need to be wired in series to produce the required 12-volts and they will provide 180 to 220 AH. Series wiring increases voltage but not amp hours.

If this still doesn’t satisfy your requirements you can build larger battery banks using four 6-volt batteries wired in series / parallel that will give you 12-volts and double your AH capacity. 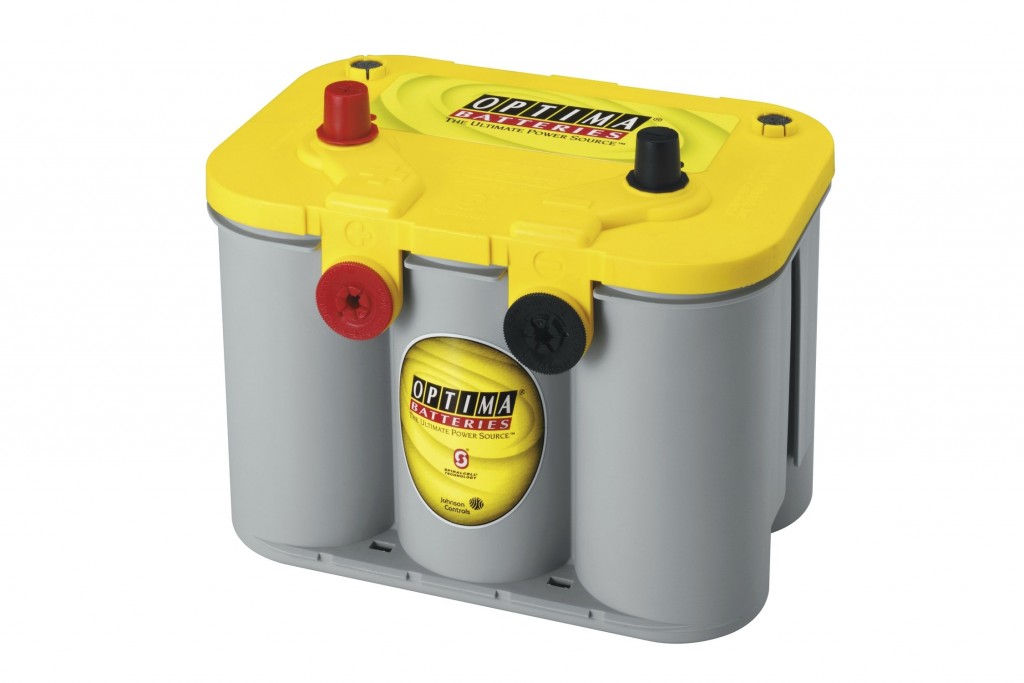 Let’s review some of the best options out there for RV house batteries, so potential buyers have some insight into where to start their search. These batteries are a bit costly compared to marine batteries, but they’re valuable for the sustaining power they provide your RV while stationary, so they’ll generally be worth the extra cost for most.

The brands of batteries vary wildly, so you may encounter many different types that are hard to separate. It’s best to rely on the specifications and, if possible, user feedback to make the decision. The XS Power Deep Cycle Battery is available for just over $100 through several trusted online retailers. The Stinger Deep Cycle Battery offers more power for more money, going for $145 on Half Price Car Audio. The Universal Sealed AGM battery sells for considerably less, going for only $65 plus shipping on BatteryStuff.com. If you’re in need to a deep cycle and starter battery, you might consider spending more for a dual purpose battery, like the Optima Yellowtop for $250.