On your next road trip you could seek out museums and national parks… or you could go over the strange side and check out these weird sites around America.

From natural abnormalities like albino squirrels and displaced deserts, to the just out-and-out odd, like mystery lights and gravity vortexes, you’ve come to the right place for the strange and unusual.

So the next time you hit the road, be sure to put the top ten weirdest sites in America on your travel map. 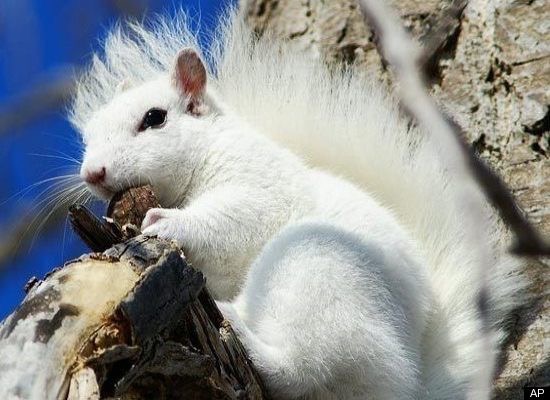 While not unique to USA, albino squirrels are quite a sight to see. As a matter of fact, the red-eyed, white-furred creatures rule in Olney, Illinois where people flock to catch a glimpse and get a photo op. These animals even have the right of way on every street in town, and it’s against the law to leave town smuggles one out of town.

It is believed that like people, the squirrels inherited one or more defective genes. These caused them to be unable to produce normal amounts of melanin. Several different genes are involved in albinism, depending on the specific type.

Albino squirrels have also been sighted in Marionville, Missouri; Brevard and Charlotte, North Carolina; Kenton, Tennessee and Exeter, Ontario Canada. Some places are so careful to preserve their title as “home of the white squirrel” that they’ve resorted to trapping and relocating the darker cousins to keep the strain pure. 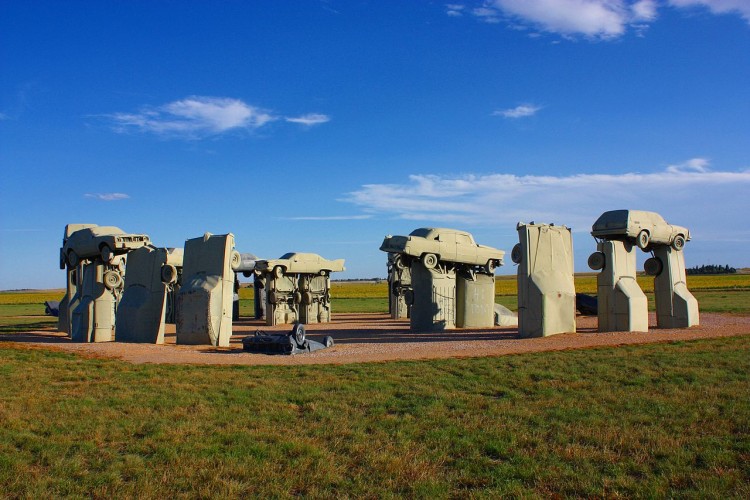 Ever wonder where cars go to die? We might have found the answer. This adaptation of England’s Stonehenge is composed of thirty-eight cars, which sprayed gray, present a modern picture of the Druid find uncovered by archeologists. This one, however, was built in 1987, and it is located in Alliance, Nebraska. The brain child of Jim Reiders, who was fascinated by the original British structure, Carhenge was built of cars rescued by the “artist” and his friends. It stands as a memorial to Reiders’ father on whose farm it is located.

Some of the cars are partially buried as deep as five feet. To date, over 80,000 tourists have visited this free site in the middle of a wheat field. Carhenge is proof that if you build it, they will come. 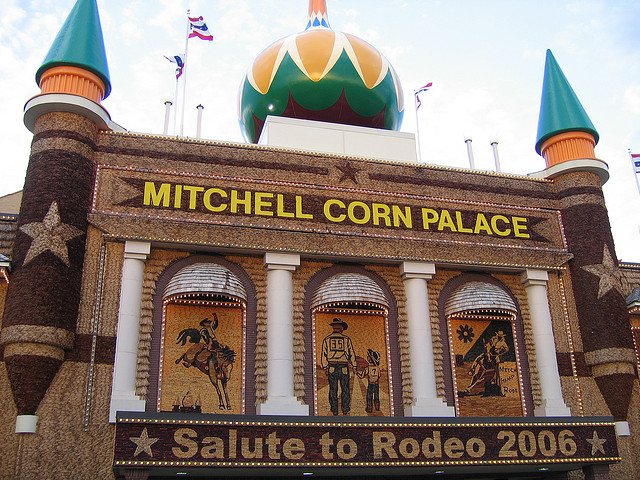 The first corn palace was built in South Dakota in 1892 to honor the crop that flourished in the state’s rich soil. Today, a much larger structure rises in Mitchell, South Dakota. It has Russian turrets and space inside large enough to hold a rodeo.

Billed as the world’s largest and most famous corn palace for over 120 years, Mitchell’s Corn Palace recently underwent a huge renovation to get ready for South Dakota’s 125th birthday. Visitors flock to Mitchell for the rodeo days and to see this marvelous structure.

4. The Desert of Maine 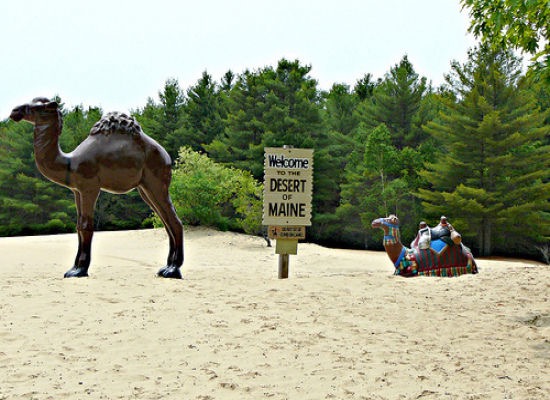 The cold, northern state of Maine sure does seems like a strange place for a desert! This 300-acre tract of land near Freeport is nestled between pines and babbling brooks. It’s no joke. This is a desert with mounds of sand, hotter-than-surrounding-area temperatures, and land that grows little. Travelers to the giant L.L. Bean headquarters are encouraged to spend some time in the desert while they’re here.

This strange landform is believed to have been caused by glaciation 11,000 years ago.

5. The House on the Rock 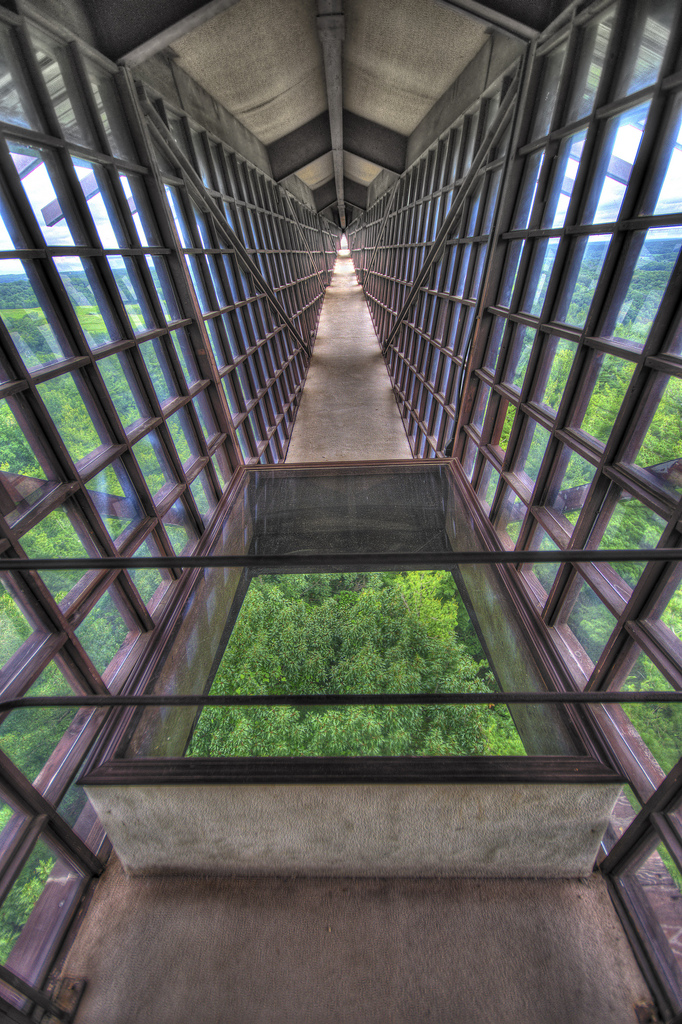 Built in the 1940s by architect Alex Jordan, and based on Frank Lloyd Wright’s design, The House on the Rock in Spring Green, Wisconsin feels like touring a museum with a quirky hoarding curator. Visitors come to see the architecture, but also to browse Jordan’s huge and bizarre collections in this house that was built as his summer retreat. 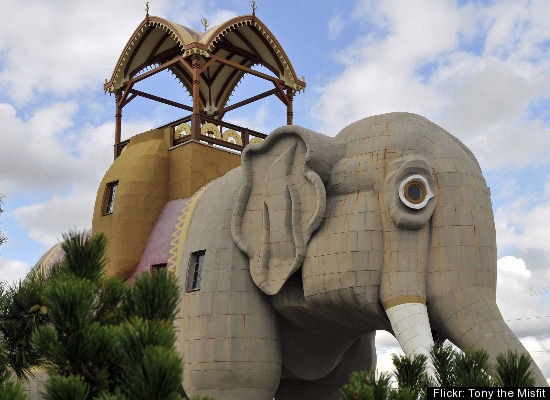 Weighing ninety tons, and constructed of wood covered with tin sheeting, Lucy the Elephant is the sixty-five-foot tall greeter at the gates of Margate, New Jersey. Built by James Laverty in 1881 as a publicity stunt for his real estate business, Lucy has been bringing tourists to the area for nearly 130 years. At six stories high, Lucy is an example of zoomorphic architecture. 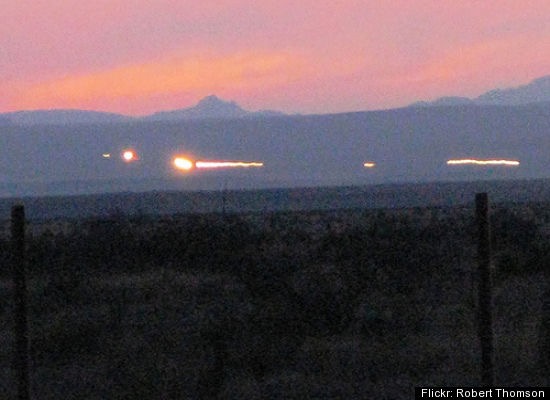 Since 1883, this strange phenomenon has baffled scientists. Visible only on clear nights, the Marfa Lights are weird greenish yellow orbs. They can be seen on rare occasion when the conditions are just right on the Mitchell Flats outside Marfa, Texas.

There is no way to predict when they will appear. They have been seen in various weather conditions, a dozen or so nights a year. Eyewitnesses have described them as roughly the size of basketballs in colors of white, blue, yellow, red and more. The strange lights seem to float and bounce. Conjectures include UFOs and reflections of car lights. Nobody knows for sure what they are — or if they really even exist at all. 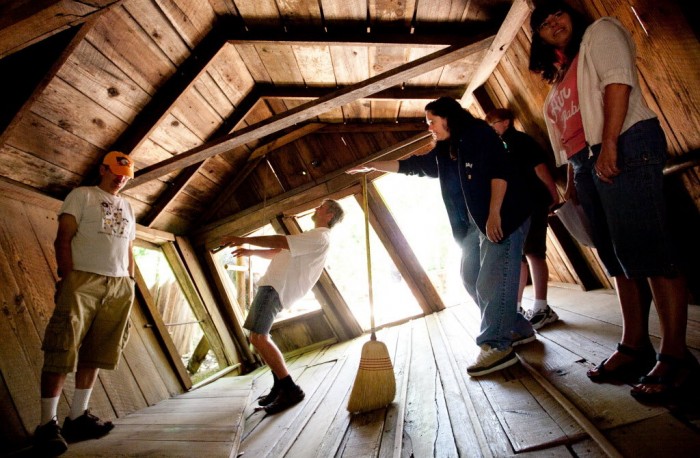 The Oregon Vortex and its “House of Mystery” are located in Gold Hill, Oregon. Discovered in the 1930s, the house was marketed as a tourist attraction. It was the set for an X-Files episode in 1999. The reason for the house’s slant has been credited to the paranormal. The scientific explanation is no less mysterious. In the late 1800s the Grey Eagle Mining Company built a gold assay office just up the hill from where the mine tailings were slowly shoving Sardine Creek westward. Gold Hill, Oregon was the aptly named location. Twenty years later the building was abandoned. Heavy rainfall caused a mud slide and the building was washed down the hill. It landed twisted and tilted against a large maple tree. The house of mystery is in surprisingly good shape despite a hundred years and countless visitors. The building is described as a “gravitational anomaly”. 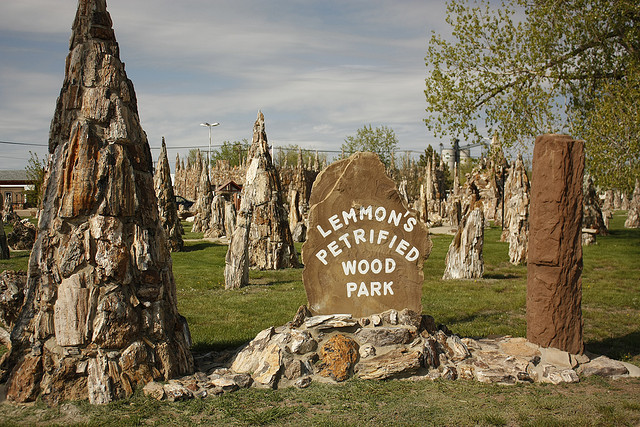 Located in Lemmon South Dakota, Petrified Wood Park is the innovation of Ole Quammen. Located in the upper South Dakota area, the park takes up an entire city block on Main Streetin downtown Lemmon. Well maintained and recently renovated, this is one of the better manicured rock sculpture parks.

A depression era project, Petrified Wood Park employed thirty to forty men for two years. Quammen, who headed the project, was an amateur geologist. He had the men scavenge rocks and fossils in the area and haul them back to Lemmon. There they built a castle, a wishing well, a waterfall, the Lemmon Pioneer Museum, and hundreds of pile sculptures of petrified wood. 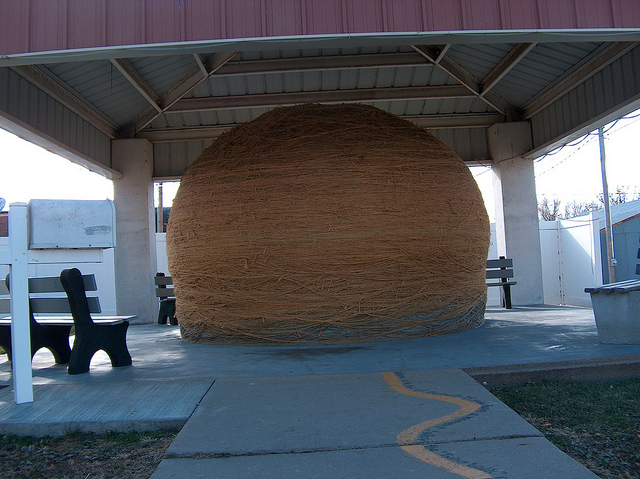 Constructed by one person in the 1950s, this Darwin, Minnesota roadside attraction is a wonder. Francis Johnson wrapped twine four hours a day for twenty-three weeks. By the end of the fourth month he needed a crane to move his project.

By 1979, his ball weighed almost 9 tons and was 12 feet wide. A quiet, unassuming man, Johnson died of emphysema leaving behind thirty years of twine and the title of the creator of the World’s Largest Twine Ball Rolled by One Man. Darwin built a museum to honor his effort.

Do you know of any other weird sites in America? Let us know in the comments below. Thanks for reading!

How to Beat Travel Anxiety

Traveling can make people anxious for a variety of reasons! Some people develop anxiety about traveling focused on the safety…

Some may try to tell you that Iowa is not worth visiting. Ignore them! This state is truly awesome, and…

RVing is a great way to travel the country. You can see a variety of different areas, meet new people,…

No matter if you spell it Barbecue, BBQ, or Bar-B-Q, smoked meats are a tasty tradition with its own culture,…

Making the decision to go on a last-minute vacation is always a thrilling and exciting experience. What may start as…