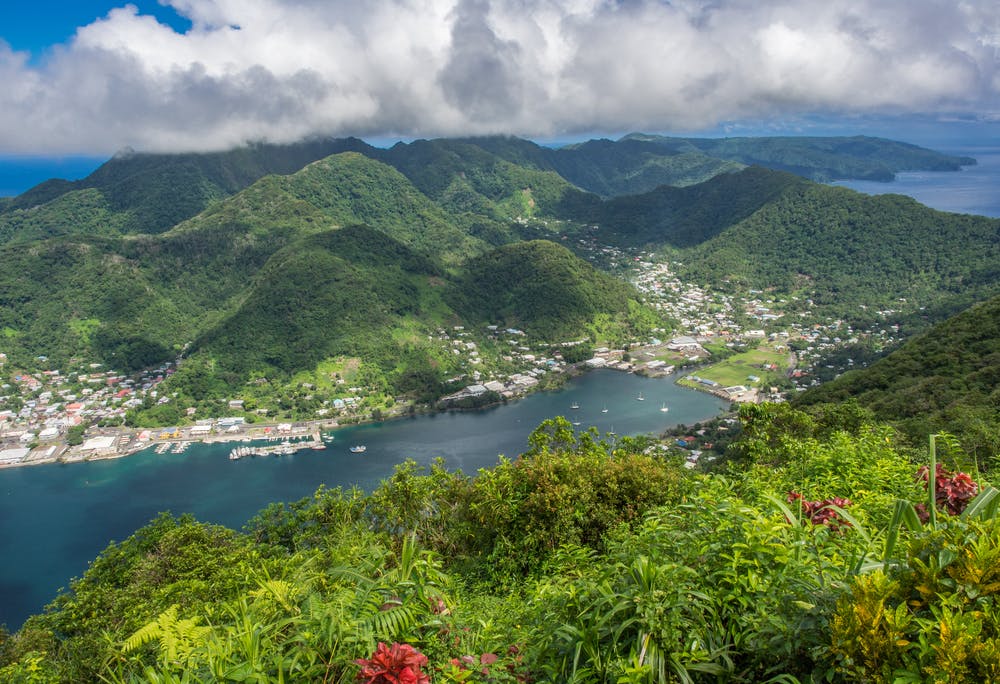 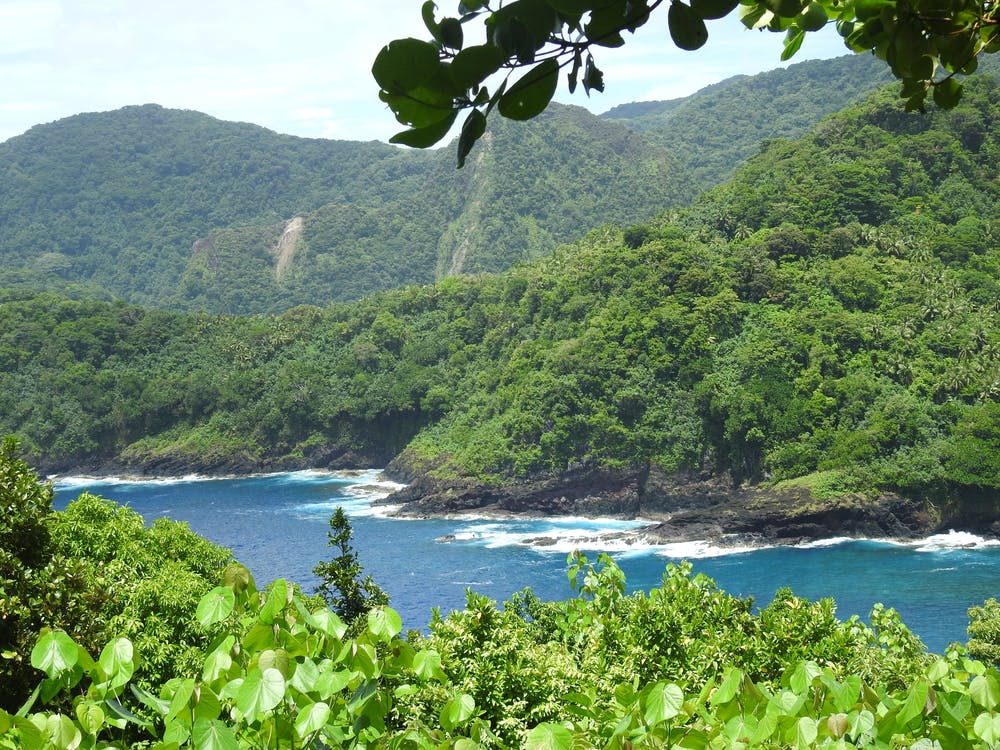 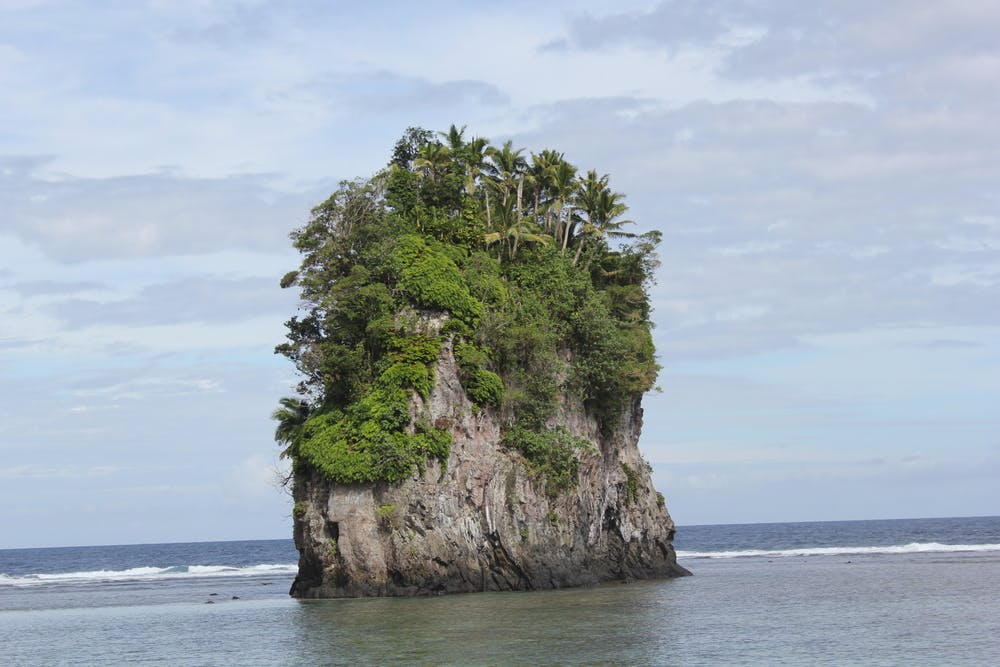 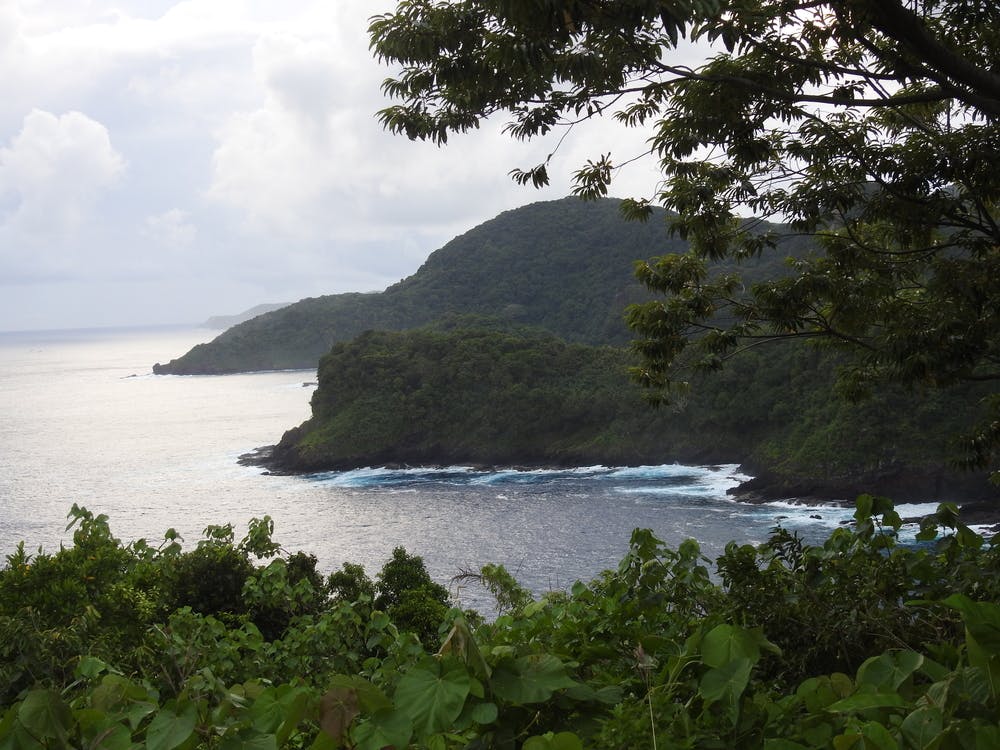 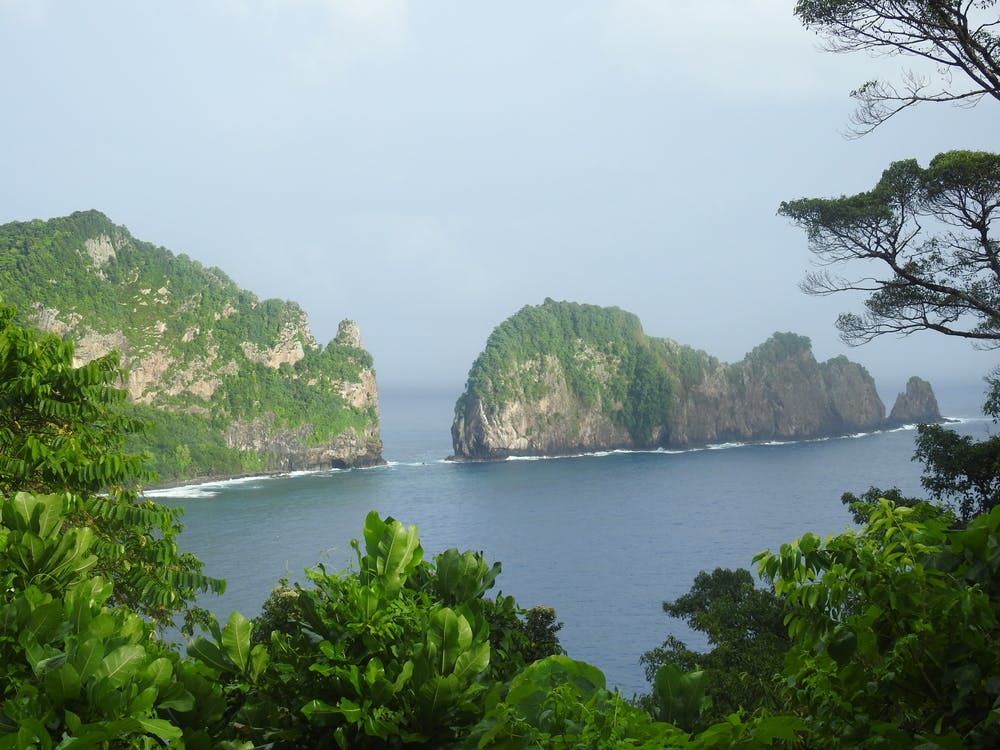 If you’re looking for the most exotic answer to a domestic getaway, you might just find it in the National Park of American Samoa, a far-off U.S. territory spread over three small islands in the South Pacific. This unique land-and-seascape is filled with strange and striking wildlife, fascinating flora, and one of the oldest and richest cultures in all of Polynesia. Historians believe people first came to the Samoan islands from southwest Asia by sea over 3,000 years ago, where they now make their lives with a swath of cultural traits now known as fa'asamoa (fah-ah-SAH-mo-ah). From hiking and beach-walking to snorkeling and SCUBA diving, or even just watching some of the everpresent fruit bats, the National Park of American Samoa is well worth the journey it takes to get there, long though it may be.

The National Park Service describes American Samoa as a “quintessential tropical paradise,” and the weather fits the bill. You can expect warm temperatures and relatively high humidity year-round, punctuated by frequent rain showers. The slightly hotter, wetter summer season stretches from October through May and is followed by a slightly cooler and drier season from June through September. Because violent tropical storms can arise at a moment’s notice, it’s important to always check the forecast before you head out for your day’s adventure.

The National Park of American Samoa is situated on a remote stretch of South Pacific islands and thus is not served by “gateway towns” in the way many of the other national parks are. However, these islands are home to a bright and vibrant community, and services including lodging, restaurants, and public transportation are available across the Samoan islands.

Along with ample opportunities to explore these lands on foot or by sea, the National Park Service and the surrounding communities also host a variety of organized events and spectacles that can round out your Samoan adventure, including traditional dancing and beach ceremonies. The park also celebrates its anniversary yearly on October 31, if you’re looking for a unique alternative to the mainland’s Halloween festivities. Check out the park’s official calendar page here to see what’s coming up.

Lodging is available on each of the islands of American Samoa with the exception of Olosega. Unfortunately, camping is prohibited within the park, and there aren’t many options for camping on the islands outside of the park boundaries, either -- and it would certainly be difficult to get an RV out there in the first place!

Instead, most visitors turn to commercial lodging options like hotels and beach bungalows, although there’s also a thriving tradition of homestays across the islands. In a homestay, visitors are welcomed into a local inhabitant’s house or fale (thatched beach hut), giving them a first-hand, insider’s perspective on the Samoan culture and lifestyle. Homestays can be arranged on Tutuila, Ofu, and Ta'u within the park boundaries, and may also be available in the surrounding island areas. Click here for full details.

From steep cliffs offering sweeping panoramas to mysterious tropical jungles to serene sandy beaches, there’s a day hike to fit every adventurer’s ideal tropical paradise experience (and fitness level) at American Samoa. Just be sure to bring an ample supply of water, as well as sun protection and foul weather gear -- the south Pacific sun is no joke, and storms can occur at a moment’s notice!

Below, find a few suggested trails to help get you started. You can also check out the park’s official hiking brochure, available here as a PDF download.

Terrain: Short but steep, Breakers Point Trail is accessed via a trailhead next to a private home -- and you will need to ask the homeowner’s permission to hike it. The trail is closed to the public on Sundays.

Terrain: This short and relatively flat trail is an easy introduction to the islands’ stunning beauty, leading to a rocky beach with unmissable views of Pola Island. Three interpretive exhibits are available at the trailhead.

Terrain: Fun to say, but more fun to experience, this trail climbs through the tropical rainforest via a series of switchbacks, leading to a hidden coastline and ocean views from a rocky ridge. You’ll then descend to a quiet, rocky beach by a series of rope ladders. Moderate intensity, but not for those with a fear of heights. Closed on Sundays.

Terrain: Although technically outside of the park’s boundaries, this challenging trek is not to be missed by experienced adventurers. Over the course of its 5.5 miles, you’ll gain over 1,500 feet in elevation, enjoying stunning tropical rainforests along the way. Finally, you’ll reach your destination: the highest point on the island of Ofu, and a breathtaking panorama of the park. It’s a toughie, for sure, but it’s well worth the effort.

Terrain: This short but moderate trail is punctuated by a variety of World War II installations, whose historical significance and technological prowess provide a fascinating juxtaposition to the lush landscape and wild birdsong. Steep ladders and steps with ropes mark the end of the trail, so be sure everyone in your hiking party is prepared to navigate those obstacles.

What to Do at
National Park of American Samoa

The National Park of American Samoa may be a bit out there, but there’s still plenty to see, eat, and do in the surrounding area. Here are a few favorite restaurants, museums, sightseeing, and shopping opportunities to check out while you’re enjoying paradise on earth.

All that rainforest hiking can work up one heck of an appetite. But whether you’re in the mood for a comforting slice of pizza or something a little more exotic, you won’t leave the Samoas with an empty stomach.

This creatively-named eatery features a harbor view and a seafood-heavy menu. (And don’t worry -- the beverages are actually totally safe, especially the coconut-based house specialty.)

Local, home-cooked meals served in take-home portion sizes. From pasta and burgers to steaks and salads, this casual stop is sure to offer your favorite dish -- and they take debit and credit cards, too.

A down-home joint serving up authentic Korean dishes to help spice up your Samoan stay. Plus, it’s very close to the park entrance.

Think you can’t get a good slice of pie this far from the mainland? Think again. Paradise Pizza serves freshly-baked pizzas as well as homemade rolls and spaghetti dishes -- so it’s sure to please the whole family.

With a traditional thatched roof and a ubiquitous side-serving of fried plantains, Tisa’s is a spot not to be missed if you’re looking for a real-deal tropical island eating experience. For best results, wash down your meal with one of their famous homemade pina coladas.

Don’t get us wrong -- you’ll want to try to bring as much of your stuff as you can when you’re visiting a park as remote as American Samoa. But fortunately, last-minute groceries, gifts, and

One could argue that the park itself is one huge museum, giving visitors a rare glimpse of untouched tropical landscapes. But there are also a few brick-and-mortar museum exhibits you don’t want to miss if you’ve already made the journey.

Just can’t get enough of the Samoas? We don’t blame you -- and we have good news. There’s plenty to see outside of the park proper.

How to Get to
National Park of American Samoa

Although American Samoa is, as its name suggests, an American territory, flights to the island are still treated as international routes by federal standards and will require a valid and up-to-date passport. You may need to demonstrate your intent to eventually leave the islands with a return or onward flight ticket, as well as proving you have enough funds to support your stay -- and you’ll also have to go through customs upon your arrival to the islands and return to the United States.

The most popular airport is Pago Pago International Airport, which is situated on Tutuila Island, which is serviced from Honolulu twice weekly by Hawaii Airlines. There is also an airfield in nearby western Samoa, the International Airport at Upolu, which receives several small flights per week from Australia, New Zealand, and Fiji.

Once you arrive at American Samoa, inter-island travel is achieved via small aircraft, boat, and public transportation. The local fleet of family busses is known as aiga, and they are affordable and frequent (though unscheduled). See the National Park Service’s official directions page for more information about getting to and around the islands.

There is no fee to enter the National Park of American Samoa. (Which is a good thing, since you’ll likely pay more in airfare and other getting-there expenses than you would for a domestic national park visit!)

Although the National Park of American Samoa might not be the right place to take an RV adventure, there are plenty of other national parks and federal recreational sites that are perfect for motorhome or travel trailer living. Traveling by RV means you have a front seat on all the action, camping close to (or even inside) the parks and getting a jump start on the trails and other to-dos each morning. If you don’t have an RV of your own, renting on the peer-to-peer market is a great way to experience this unique travel lifestyle -- and you’ll find the RV rental listings on RVshare are often only a fraction of the price of the big, commercial agencies.

No matter which of our country’s vast and diverse national parks you visit, we’re aching to hear all about your journey! Tag us in Instagram photos or Facebook post for a chance to be seen on our own social media channels, or send your best trip stories and pics to us directly at [email protected]. We may just feature your trip on the RVshare blog!