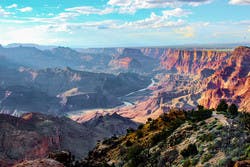 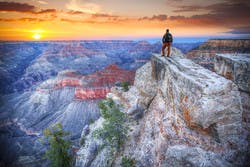 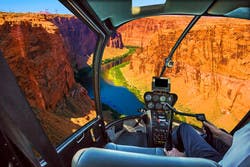 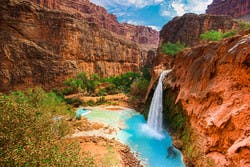 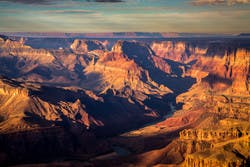 Perhaps the most iconic in America’s slew of federal recreation areas, Arizona’s Grand Canyon National Park draws millions of visitors each year -- more than six million in 2017, to be exact, making it the second-most-visited park that year, bested only by Great Smoky Mountains. The park covers over 1.2 million acres and encompasses a large part of its massive namesake canyon, a gorge carved over millennia by the Colorado River. Whether to simply peer curiously over the edge of the rim or to take on a multi-day backpacking adventure down into the canyon, travelers of all stripes flock to this quintessentially American destination each summer -- though the landmark’s South Rim is open all year round.

The Grand Canyon sees a wide range of weather events, thanks to its situation in the high desert of northern Arizona. With elevations ranging from 2000 feet to 8000, visitors can expect mild summers temperatures, with daytime averages in the 80s (except in certain parts of the park, which heat to over 100 F). Visitors in fall and spring will be treated to slightly cooler temperatures, ranging from 40 F to 70 F. The park does see snow during winter, and depending on conditions, certain roadways and trails may be closed. Always check the latest park conditions before setting out for your journey, which you can do by clicking here or dialing  928-638-7496.

Although situated in a relatively remote section of northern Arizona, Grand Canyon National Park is served by a variety of gateway towns as well as larger cities. The small village of Tusayan is only seven miles from the South Rim, and Flagstaff is just an hour and a half south of the park entrance. Other towns in the area include Page, Williams, Kingsman, and Sedona -- which is well known in its own right for ample hiking and outdoor opportunities.

There are four frontcountry campgrounds located on Grand Canyon National Park property, all of which have some accessibility for RVs -- though specific facilities, campground fees, and maximum length requirements vary.

As beautiful as the Grand Canyon is from its well-developed scenic vistas and overlooks, you won’t want to miss the opportunity to get more familiar with this geological wonder on foot. That said, desert hiking must be taken very seriously -- according to the National Park Service, more than 250 people are rescued from the canyon each and every year.

While taking one of the many trails down into the canyon can be rewarding, keep in mind that you’ll be facing the most difficult portion of your hike -- the climb back up -- after you’ve already been at it for a while. Even when daytime temperatures are mild, the desert sun is powerful, and many of the trails provide little in the way of natural shelter. Always bring ample food, water, and sun protection, and do not attempt challenging trails during the hottest months of the summer. For more tips to ensure you have a safe and enjoyable Grand Canyon hiking experience, click here -- and click here for a full list of day hikes from both the North and South Rims of the Grand Canyon.

Terrain: This paved trail begins at the North Rim Visitor Center, where self-guiding nature tour pamphlets are available to help orient you to the landscape.

Terrain: This is a difficult and steep trail down into the canyon, but it can be broken down into a number of rewarding day hikes. Take a short walk to Coconino Overlook (1.5 miles round trip) or a lengthy and strenuous trek all the way down to Roaring Springs, an 8.4-mile adventure that’ll take you all day. Pack plenty of food and water!

Distance: Up to 12 miles round trip

Terrain: This trail down into the canyon is steep, but does provide some shade along the way, as well as stunning canyon viewing opportunities even on short ventures. Bright Angel Trail can also be taken on as a backpacking adventure; backcountry camping is available at its terminus at Bright Angel Campground. Water is available but prone to seasonal pipeline breaks; check at the Visitor Center before leaving.

Distance: Up to 6.5 miles round trip

Terrain: This is a very steep and unmaintained trail for experienced desert hikers only -- but if you’re up for the challenge, you’ll be rewarded by some of the most spectacular views in the park.

Terrain: If you’re like most of the Grand Canyon’s visitors, this is the trail you’ll be sure not to miss, offering iconic views from Mather Point, Monument Creek Vista, and Yavapai Point Observation Station. The trail is serviced by a shuttle, and large portions are paved and wheelchair accessible. For full details on the Rim Trail, click here.

What to Do at
Grand Canyon National Park

Thanks to its status as one of the most-visited national parks on earth, the Grand Canyon area is filled with tons of dining, drinking, and cultural opportunities for those moments when you need to get out of the Arizona sun for a while. The bustling on-site community of Grand Canyon Village offers just about everything you could want, but even more options wait just an hour away in either direction.

Here’s what to eat, see, and do in the Grand Canyon National Park area.

Trust us on this one: all that canyon hiking works up an appetite! Here are the best spots to grab a bite, both on park property and off.

Location: Inside the Grand Canyon Lodge on the North Rim

It’s a fact of life: When you’re traveling, you’re going to find yourself in need of things. Whether those things are touristy T-shirts for mom or a new pair of hiking boots to take to the trails with gusto, you can find them in the greater Grand Canyon area.

Yes, you can learn a lot just by gazing at the canyon itself… but these cultural and educational opportunities can give you even more context and appreciation.

Make no mistake about it, the Grand Canyon is a sight for the ages. But the southwestern states have so much more to offer!

Utah and Other Area National Parks

How to Get to
Grand Canyon National Park

Depending on which direction you’re coming from, the Grand Canyon is relatively easy to access -- the South Rim is located only 90 minutes from I-40. The North Rim is more remote and difficult to access, and subject to seasonal closures, which is why it accounts for only 10% of the park’s visitorship. To learn more about the exact driving directions you’ll need to reach the park, click here.

Although the park is remote, it is in relatively close proximity to a number of large airports, including Phoenix, Salt Lake City, Albuquerque, and Las Vegas. There is also some limited air service to the small Grand Canyon Airport from select hubs and carriers.

Whether you fly in and rent or drive from your hometown, traveling in an RV offers you unparalleled park access and comfort. If you don’t have a motorhome or travel trailer of your own, browse the RV rental listings available in your area.

Once you arrive at the Grand Canyon, you can take advantage of the park’s extensive series of free shuttle busses, which make moving within the park itself simple. Depending on when you visit, you may be required to park outside of the gates and shuttle in due to lack of available parking.

The fees to enter Grand Canyon National Park help support the National Park Service and the maintenance of this unique landscape. Each of the fees below is valid for seven consecutive days of park entry.

No matter how you get there, a visit to the Grand Canyon is truly an experience to remember -- and we can’t wait to share in your exciting journey with you! Tag us in your social media posts or send details and photos to us directly at [email protected]. We may just feature your travel tales on our own blog or social media channels.

Grand Canyon National Park is 1,902 square miles large. The canyon itself is one mile deep, 277 miles long and 18 miles wide although not all of the canyon is included in the national park.

What is the climate of Grand Canyon National Park?

Temperatures and climate vary at the Grand Canyon, depending on the elevation. The top of the canyon has colder, wetter weather while the Phantom Ranch area at the bottom of the canyon is drier and hotter. In summer, average highs are more than 30 degrees warmer than average lows in the park. Late summer also brings a monsoon season with thunderstorms.

In winter, the top of the canyon can get snow but it usually melts before reaching the canyon floor.

Yes, pets are allowed at Grand Canyon National Park. They are allowed on trails above the rim, at Mather Campground, at Desert View Campground, at Trailer Village, and in developed areas. Pets are not allowed below the rim, on shuttle buses, or in park lodgings unless they are staying with owners in a pet-friendly room.

Do you have to reserve a camping spot at Grand Canyon National Park?

What are the top things to do in Grand Canyon National Park?

Top things to do at Grand Canyon National Park include visiting Grand Canyon Village, stopping at Mather Point, and taking a mule ride into the canyon. There is plenty of hiking and exploring to do at the park as well.