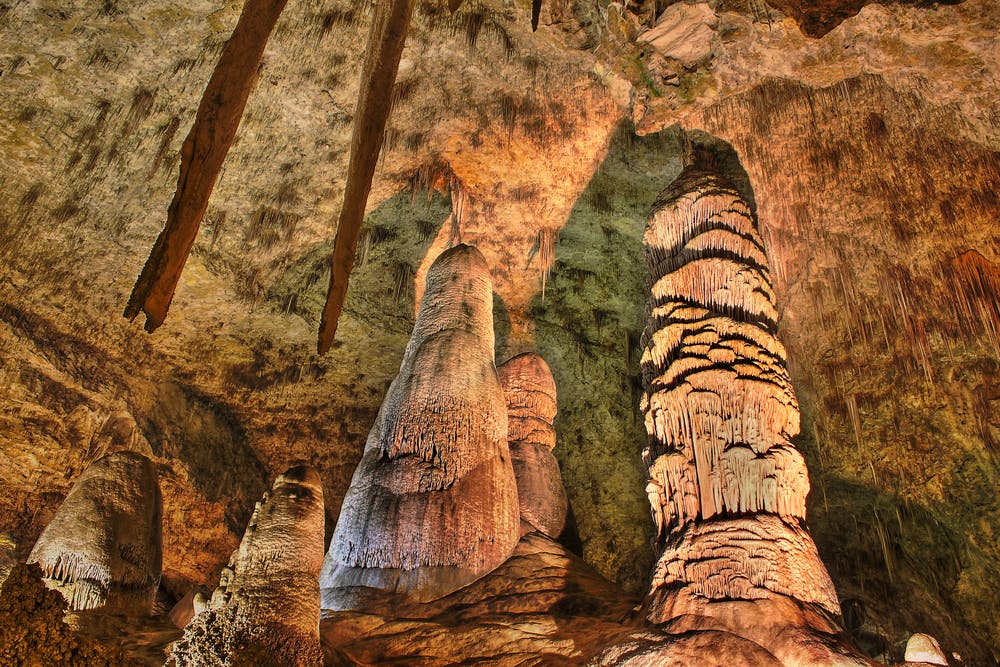 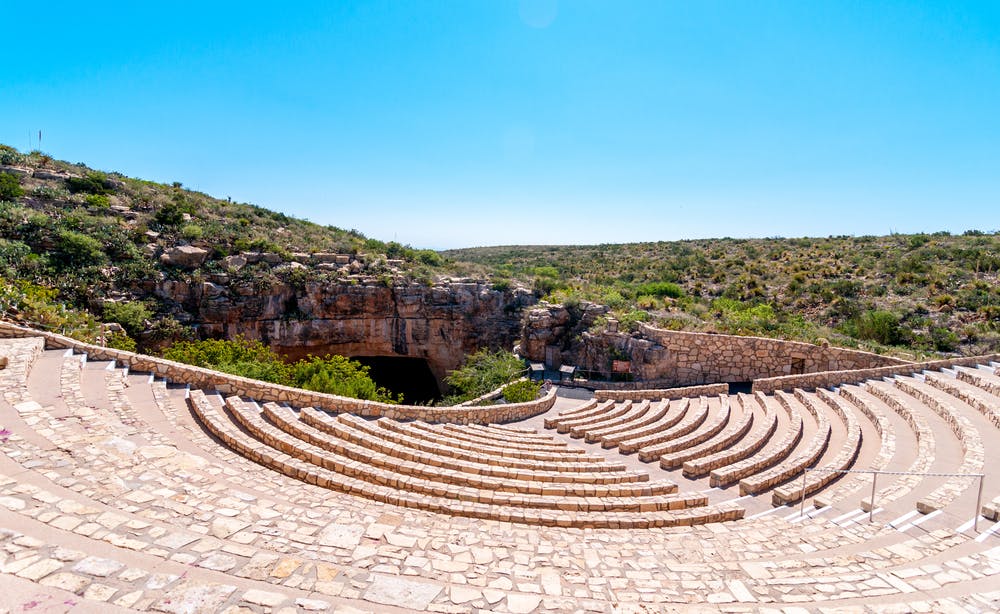 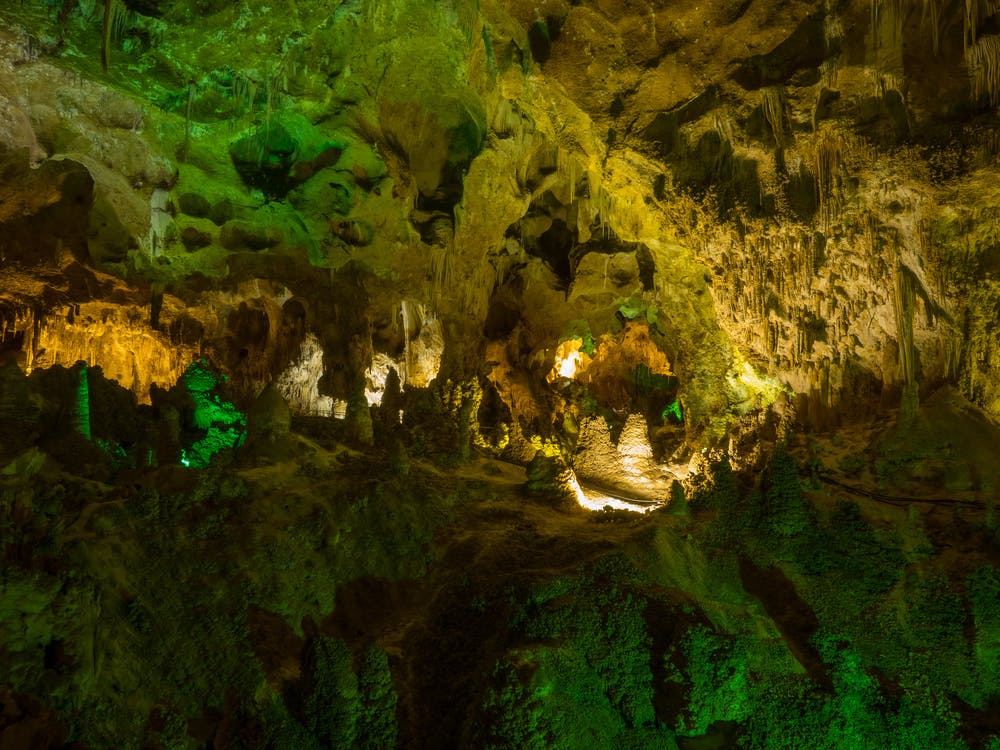 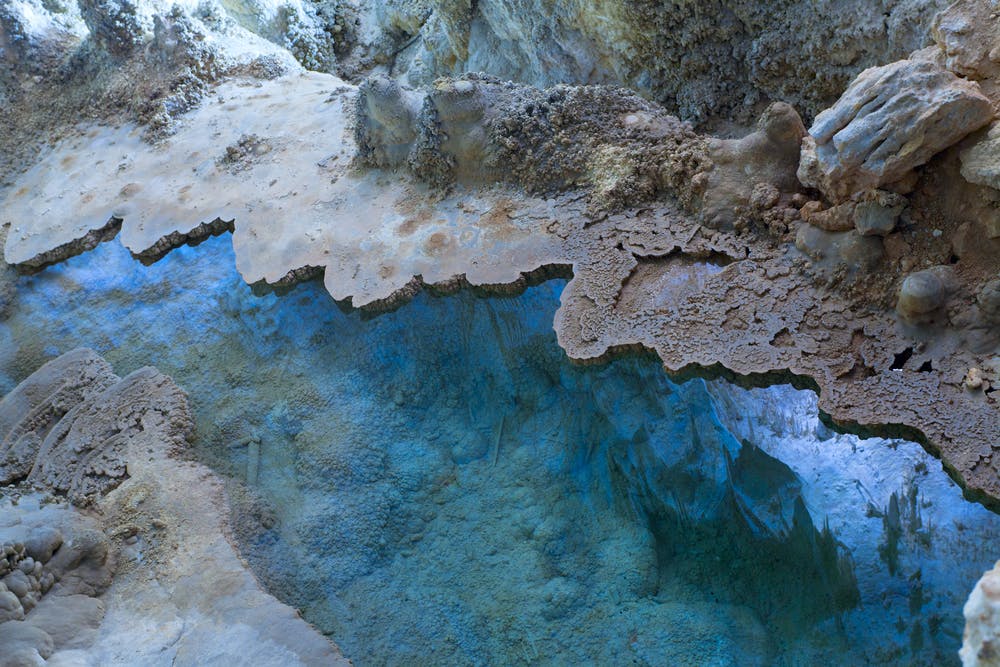 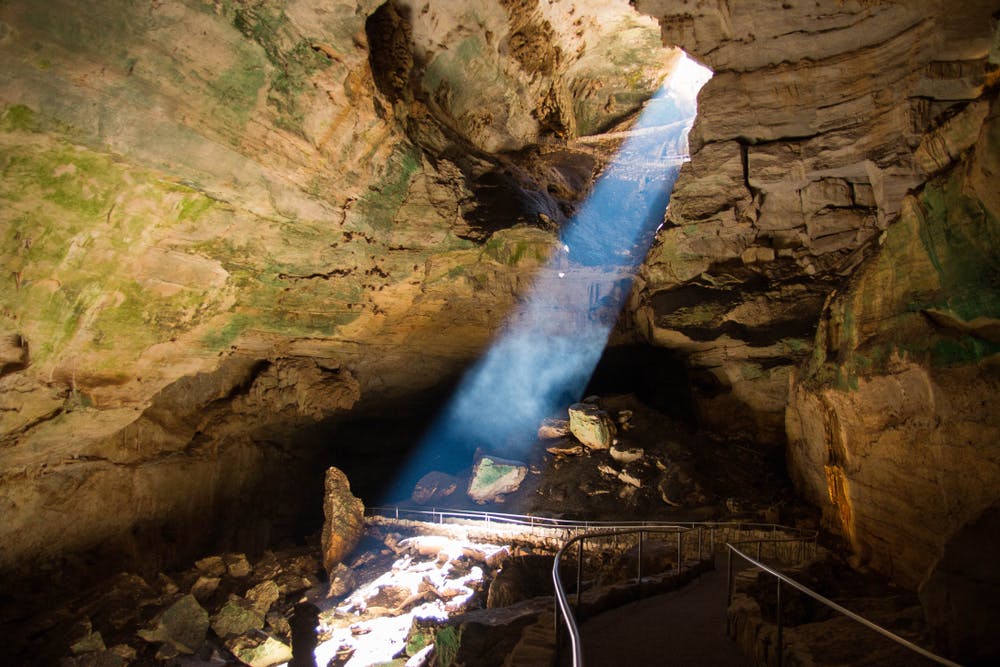 First discovered by a curious teenager in 1898, Carlsbad Cavern is an incredible underground limestone cave in the Guadalupe Mountains of southeastern New Mexico, just north of the Texas border. The national park contains over 119 limestone caves surrounded by the vast beauty of the Chihuahuan Desert. Each year, about 410,000 people visit Carlsbad Caverns National Park to see the fossilized caverns or spot the thousands of Brazilian free-tailed bats that inhabit the park. Several hiking trails and a picnic area are also available for visitors.

Weather at the park can be quite hot during the day, but don’t be deceived. The temperature inside Carlsbad Cavern is a consistent 56 degrees Fahrenheit throughout the year, giving visitors a chance to cool off - so be sure to bring a jacket along with you! In the summers, temperatures can rise into the 90s and sometimes into the low 100s before cooling off to temps in the low 60s at night. Fall brings pleasant temperatures in the 70s during the day and lows that drop from the high 50s in September all the way down to the high 30s in November. Winters at the park are fairly mild, ranging from highs in the mid-50s to lows typically no colder than the low 30s. One of the best times to visit the park is during the spring, when temperatures warm up to the 60s and 70s during the day.

The closest nearby town is Whites City, which is just outside the park’s entrance. Other cities in the area include Carlsbad, Loving, and Artesia. Some travelers may also choose to stay in or visit one of the tiny Texas towns outside the park, such as Pine Springs or Orla. And for those interested in extraterrestrial life, the town of Roswell, where a UFO supposedly crashed in 1947, is about an hour and a half north of the park.

Carlsbad Caverns National Park has a number of regularly scheduled events throughout the year, including the popular bat flight program. Every night at 6:30 p.m. from Memorial Day weekend through October, visitors are invited to watch the park’s Brazilian free-tailed bats fly from the cavern at sunset. A park ranger guides the tour, which is free and available without reservations, although no cell phones, cameras, or other electronic devices are permitted. During certain times of the year, you can also reserve a spot for the guided star walks and moon hikes after the bat flight program. These free hikes are designed for stargazing and are first come, first serve with a maximum of 25 participants.

The land that is known, in the present-day parlance, as Carlsbad Caverns National Park has been inhabited by human beings for more than 12,000 years, starting with nomadic tribes of Native Americans that roamed at the end of the last ice age. Learn about the Indigenous history of Carlsbad Caverns here.

Unlike many national parks, Carlsbad Caverns National Park offers no overnight campgrounds or lodging. Some visitors choose to take advantage of the park’s primitive campsites, which are available in the backcountry by permit only. No vehicles, pets, open fires, or bikes are allowed in the area, and the maximum stay for the sites is seven days.

More likely, though, you’ll want to stay at one of the area’s nearby private campgrounds. Here are a few suggestions to get you started.

Because most of the park consists of a desert landscape, opportunities for hiking at Carlsbad Caverns National Park are somewhat more limited than at other national parks. That being said, there are still a handful of trails for those of us who just can’t imagine a trip to a national park without including a hike or two. Here are some of the trails available around and outside of the caverns.

Terrain: A dirt road leads to an old mining operation and out to Whites City

Terrain: A steady incline ascends to a beautiful canyon overlook

Terrain: Descend into and out of Rattlesnake Canyon on this moderately difficult trail

Terrain: A dirt road turns into the trail, which leads to the top of a canyon and across the plateau

Terrain: This flat indoor cave trail is best for exploring the cavern formations

Terrain: A steep trail that takes you to cavern formations including Devil’s Spring, the Whale’s Mouth, and Iceberg Rock

What to Do at
Carlsbad Caverns National Park

Once you’ve explored Carlsbad Caverns, there’s still plenty of things for you to do outside of the park. Whether you’re looking for a great meal, some local shopping, a unique museum, or even more sightseeing, you’ll find it in this beautiful area of southeast New Mexico. If you need some suggestions, here are a few of our favorite things to do near Carlsbad Caverns.

This part of southeast New Mexico is all about comfort food and homestyle cooking. From barbecue to Mexican food to a local craft brewery, there’s something for everyone to enjoy for dinner or a quick bite to eat. Here are a few of our favorite places to dine on a trip to Carlsbad Canyons National Park.

Looking for a great souvenir, some fishing gear, or just a new piece of clothing to wear on your trip? From gift shops to outdoor goods stores to clothing boutiques, here are a few great places to spend the afternoon browsing.

Catch some rain, or just looking for something to do with kids? These museums provide a great opportunity to learn more about the people and culture of southeast New Mexico.

While most people come to Carlsbad Caverns National Park to explore the caves, don’t forget to check out the great sightseeing spots outside of the park. Here are some of our favorite places to picnic, hike, horseback ride, and swim.

How to Get to
Carlsbad Caverns National Park

If you plan on flying to the park, the two closest airports are in Roswell, New Mexico or El Paso, Texas. The Roswell International Air Center, which is about a 1.5-hour drive to the park, is serviced by American Airlines via Phoenix and Dallas-Fort Worth. Driving from the larger El Paso International Airport to the park takes about 2 hours and 10 minutes but offers more options for flights. The El Paso airport is serviced by Allegiant, American Airlines, Delta, Frontier, Southwest, and United. Car rentals are available at both airports.

You may also be interested in arriving by RV. RV camping allows you to bring all the comforts of home with you while you explore the park and the rest of southeast New Mexico. RV rentals are available all over the country, so it’s easy to find a rental no matter if you’re looking to drive from home or simply pick up the keys when you get there. Whether you prefer a larger motorhome, a tow-behind trailer, or a small pop-up camper, there’s definitely an RV out there to suit your needs.

Just as a reminder, there’s no overnight RV camping at Carlsbad Caverns National Park, so you’ll need to make reservations at one of the private campgrounds mentioned above. However, the park does have plenty of RV parking available during the daytime in the front visitor center parking lot.

Per adult. Good for three days. Free of charge if you're 15 years of age or younger.

We hope you have an awesome trip to Carlsbad Caverns National Park! Here at RVshare, we’re passionate about working with people like you who love to travel and enjoy nature and the outdoors. Whether you visit southeast New Mexico in an RVshare rental or simply want to share your national park experience with other travelers, email us your vacation photos at [email protected]or tag us on social media for a chance to be featured on our blog or social media channels.