5 Places with Unusual Names That You Have to Visit 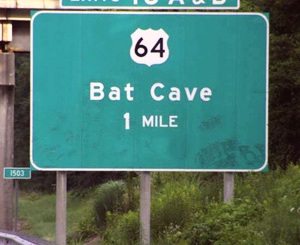 The World’s Largest Ball of Twine, the Biggest Frying Pan, a two-headed calf, or another Paul Bunyan statue, these are sites that compel some folks to travel. Where others flock to the Grand Canyon these globetrotters are likely to seek out Roswell, New Mexico, or at least the touristy “Crashdown Café”. They are the ones most apt to post pictures of themselves with signs of towns, parks, or restaurants that sport unusual names. For these people, the following locations may make it on their bucket list.

This community in Henderson County, North Carolina is named for the large nearby cave that hosts several species of bats. Although the cave isn’t open to the public, many travelers have their picture taken with the sign of the town with the unusual name, especially fans of the “Batman” franchise.

Boring, Oregon is another village with an unusual name. A couple of Scots passed through the town while on a bike trip. When they returned home, they petitioned to make Boring a sister city to their own.

They lived in the Scottish village of Dull. Oregon’s governor enjoyed the idea so much he proclaimed August 9th a “Boring and Dull Day”.

3. Hole in the Ground, Oregon

Avoid the crowds and cost of admission at Meteor Crater and see “Hole in the Ground” instead. It is found in the Fort Rock Basin of central Oregon near Crater Lake.

Similar in depth, diameter, size, and height to Meteor Crater, it is in fact an explosion crater. It is also free to visit, making it a logical choice.

As the largest state in the 48 continental states, it isn’t surprising that Texas ran out of names. Not only is there a small community with the unusual name of Loving, Texas, there is also a Loving County there, as well.

The town, however, is not located in the county of the same name.

Located west of Conway in central Arkansas, this community earned its name during the days when steamboats traveled the Arkansas River. As the crew from the boats waited for the water to rise, they would visit the local tavern.

The locals claimed, “They suck on the bottle ’til they swell up like toads.” Their community pride culminates in a three-day celebration known as “Toad Suck Daze”.

While it is obvious that traveling is a great way to expand your horizons, by visiting some lesser known areas with unusual names, you are truly taking “the road less traveled”, as Robert Frost would say. Many people have their family photos taken at the Grand Canyon or Niagara Falls. How many, though, have mementos from Happy Camp, California or Peculiar, Missouri? Wherever the road takes you, with an open mind and a joyful heart, you can ensure experiences and memories that will remain with you for the rest of your life. Please share with your friends and family to inspire them to “seize the day” and “stop and smell the roses,” wherever they find themselves.

The 9 Best Swimming Holes to Visit Across the Country

There’s nothing quite like a refreshing dip to ditch the…