When thinking of national parks in South Dakota, it’s likely that Badlands is top of mind — or even Mount Rushmore, though it’s technically a national memorial. But Wind Cave National Park is something of a hidden gem in western South Dakota: above, a rolling grasslands represents one of the few remaining intact prairies in the nation, and below, one of the world’s longest caves awaits those adventurous enough to plumb its depths (with a knowledgeable tour guide, of course).

Western explorers first found and entered the cave in the late 1800s, and its majesty and mystery have drawn human visitors ever since. But the human history and cultural import of the cave and its surrounding area stretches back much further than that. The landscape known as Wind Cave National Park rests on land that’s both historic and sacred to the Lakota and Cheyenne people, and today, the park consults with more than twenty associated tribes who can trace their legacy back to this important stretch of countryside.

Here is part of their story. 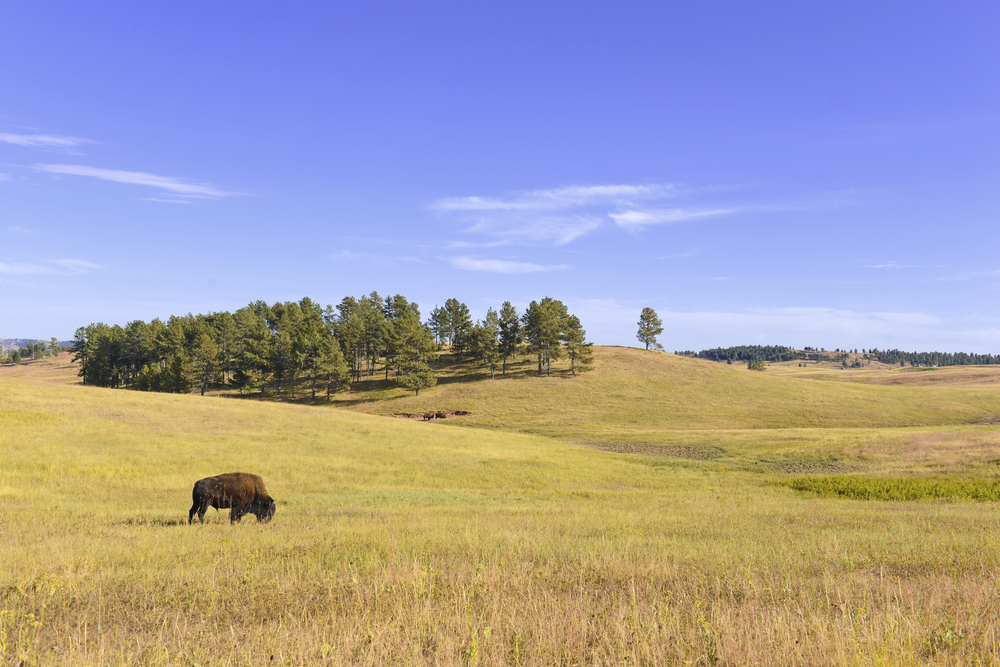 The Lakota and Cheyenne are two tribes of Indigenous people who have long called the Great Plans and grasslands their home. The Lakota are one of the largest subcultures of Sioux people, and largely populate North and South Dakota, while the Cheyenne are the larger group made up of two smaller tribes, the Só’taeo’o or Só’taétaneo’o. The Cheyenne language is in the Algonquian language family.

Both of these bands of Native Americans have rich cultural traditions and complex governmental and religious structures, and both had populated these areas for centuries by the time European settlers and traders showed up in the 1800s and displacement began.

For both of these cultures, the grasslands that characterize this part of the country were vital: it was here that they hunted bison, one of the staples of their diet, as well as foraging for local edible and medicinal plants and the other ingredients of life. Additionally, Wind Cave itself plays a special role in their mythos and spiritual understanding of the world. You can read the full retelling of the story at the National Park Service website, where it is rendered beautifully and also orated by a Native American woman, but in short, Wind Cave was seen as a passageway into the underground spirit world, where human beings first existed before the earth was ready to care for them. In modern Lakota parlance, the place is called Maka Oniye, or “breathing earth,” and continues to hold sacred significance for these people.

The Lakota and Cheyenne tribes stand thousands strong and still populate the areas surrounding the park today. Many other Native American tribes can also lay claim to Wind Cave and its surrounding areas in a fundamental historical way that western settlers cannot; you can learn more about the associated tribes at the National Park Service website, which links out to the various contemporary tribes’ webpages.

Understanding the full extent of the human history of a given landscape is a critical first step toward respecting that landscape — after all, we cannot respect what we don’t comprehend. Reading write-ups like this one and the information available through the NPS (or whatever bureau oversees the wilderness you’re visiting) is time well spent, and we thank you for starting here. You can also check out the free online web app Native Land to learn more about whose ancestral stomping grounds you’re occupying, no matter where in America — or in many places across the world – you may be.

But education is just that: a first step. To fully pay our respect to both the land and the people who so long inhabited it, we must also make a commitment to keeping those lands thriving and livable in the way so aptly demonstrated for us by those Indigenous tribes. As contemporary visitors, one great way to do this is to utilize Leave No Trace principles.

Leave No Trace is an organization devoted to ethical outdoor recreation, and its seven principles are both easy to follow and common-sense. For example, Leave No Trace advises visitors to camp, hike, and create fires only in places that have already been impacted by these human activities, as well as packing out all the garbage and gear you pack into a given landscape.

These, along with its other five steps, will help ensure that Wind Cave (and all the other national parks you visit) will stay in pristine shape for future generations. We only get to experience the wonder of these landscapes thanks to those who came before us — so paying that favor forward is one of the very best ways of showing our full respect for their efforts and the land itself.