It’s a stretch of sand so vast, it’ll make you think you’ve traveled to the Sahara — but which is actually stucked into the southwestern corner of Colorado, boasting America’s tallest dunes. And it’s so much more than that, too; Great Sand Dunes National Park is a Four Corners-area gem that many unfortunately miss in favor of other (admittedly equally incredible) national park properties like Mesa Verde.

But if you ask us, this 150,000-acre wilderness is absolutely unmissable. Where else can you sled down towering dunes in full view of a stunning mountain range in the background?

As incredible as it is to be a contemporary visitor to this unique landscape, it’s also important to recognize that what we call Great Sand Dunes National Park has served as a human touchstone, gathering place, and resource generator for far longer than western minds can remember. The land occupied by Great Sand Dunes National Park today is the historic and ancestral grounds of many tribes of Indigenous Peoples and Native Americans, including the Ute, Cheyenne, Apache, and Pueblo people. 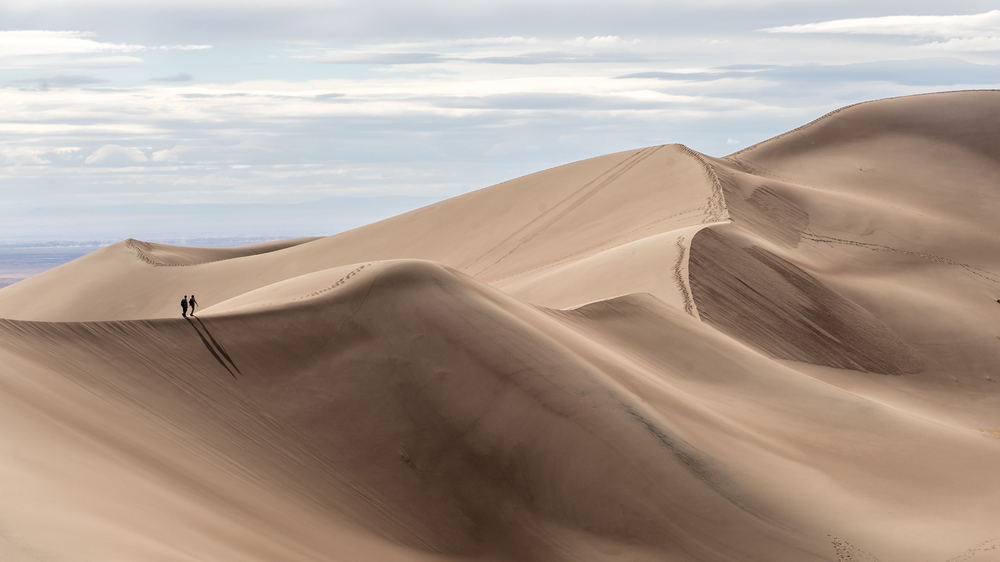 The Native Americans who have long populated the southwestern United States, including the area known today as Great Sand Dunes National Park, enjoyed — and continue to enjoy — rich cultural traditions and practices that put them into symbiotic communion with the land. Traveling to follow seasonal game animals as well as edible plants, while also maintaining well populated semi-permanent villages, these Tribes understood how to live with the Earth as opposed to on it — and their fingerprints and footprints can be seen in many of the areas surrounding this national park.

The many bands of Indigenous Peoples who populated and passed through this area historically recognized its sacred significance; The Ute people called it saa waap maa nache, or “sand that moves,” while Jicarilla Apaches who lived in nearby Northern New Mexico called the dunes sei-anyedi, meaning “it goes up and down.”

These Native Americans still populate the desert southwest, though they have been displaced into reservations. Their long-standing traditions continue to be enacted in community today, and their rich cultural histories inform the landscapes that have held them for centuries before we arrived.

When visiting Great Sand Dunes National Park — or, honestly, any national park or wilderness in America — paying respect to the First Peoples who originally inhabited and stewarded the land is an important first step toward understanding our place in the greater historical context. Along with reading write-ups like this one (and taking advantage of the interpretive exhibits and signage available at the parks themselves), you can always visit Native Land to learn more about whose ancestral grounds you’re on, whether you’re in a city or the countryside.

But educating ourselves about the people who inhabited these lands before us is only one part of the equation. It’s also our responsibility to carry on the tradition of stewardship they set the precedent for, so as to preserve these lands for future generations — our children, and our children’s children thereafter.

Leave No Trace offers some easy-to-follow guidelines that make it easy to enjoy any natural wildlife area without making a big impact, including steps like packing out all the trash you pack in and setting fires only in designated campfire areas.

We hope that having this context and information helps you more fully enjoy your trip to Great Sand Dunes — or any national park you may find yourself in — and also motivates you to participate in the ongoing wellbeing of this incredible planet of ours.