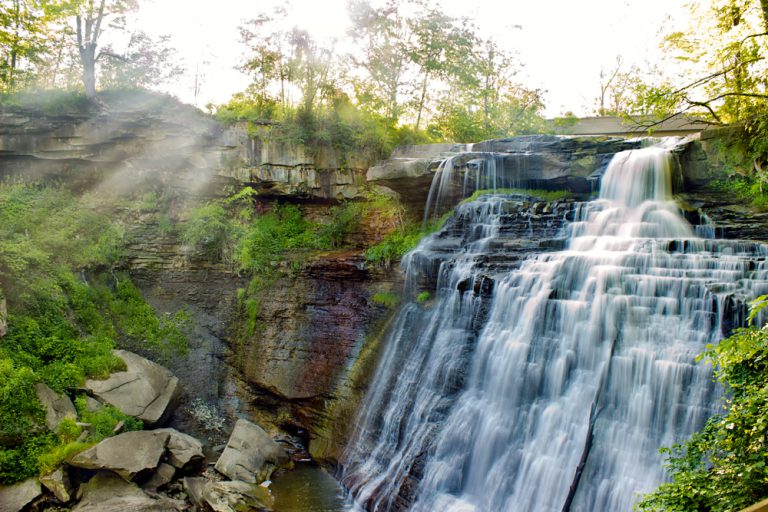 Tucked along the Cuyahoga River almost smack-dab in between Cleveland and Akron, Cuyahoga Valley National Park enjoys the distinction of being the only national park in the state of Ohio — and that convenient location makes it pretty darn popular. Each year, this 33,000-acre wonderland, which boasts  100 waterfalls, sees more than two million visitors, eager to wander along its forested paths and gaze up at those breathtaking cascades, including the 65-foot Brandywine Falls, Ohio’s tallest.

But this region has as much deep and rich human history as it has stunning natural beauty. In fact, the word Cuyahoga itself is derived from a Native American tongue — the Iriquois language, specifically. The word may be translated to mean crooked water or place of the jawbone.

But the Indigenous history of Cuyahoga Valley National Park stretches back even further than that. Evidence shows that more than 500 generations of Native Americans have inhabited these gorgeous hills, with the first nomadic Paleo-Indians visiting roughly 13,000 years ago. 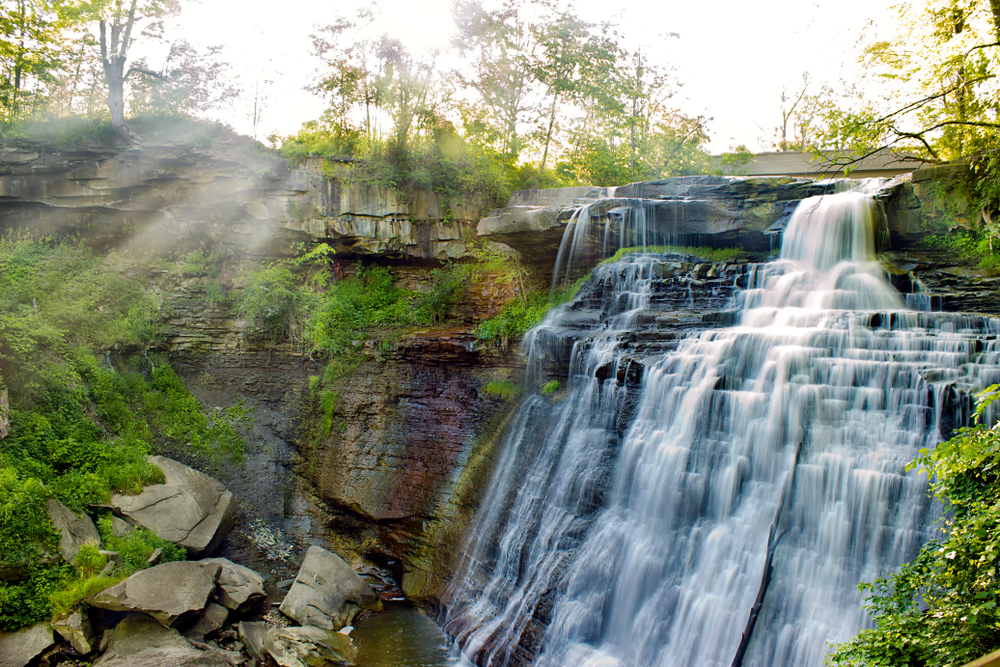 The world was a very different place 13,000 years ago, at the end of the Pleistocene era with the last ice age melting off. The massive Wisconsin Glacier was melting, giving shape to this part of northeastern Ohio (and so many other areas in the midwest) as we know it today — and small groups of nomadic Native Americans roamed the land, following the large game animals they hunted, including caribou.

These were the true first inhabitants of what is today called Ohio, or, indeed, America at large.

As time went on and the earth continued to evolve and grow warmer, the people who occupied these lands also changed their way. Between about the year 8000 BCE and 500 BCE, Archaic people lived and hunted here, moving less frequently (with the seasons) and enjoying larger traveling family groups. They were able to supplement their hunted diet with seeds, berries, nuts, and eventually began to domesticate certain plants like squash. Remains of Archaic cooking fires have been found by archeologists within the confines of what is Cuyahoga Valley National Park today.

Then, around the year 500 BCE up to about 900 CE, Woodland People lived here, inhabiting a range of different Native American cultures including Hopewell and Adena ways of life. Their complex social structures and ritualistic practices included constructing large earthen mounds, many of which were burial places, as well as crafting clay pottery. These Indigenous people relied more heavily on agriculture and grew crops including sunflower, goosefoot, and squash. They were less nomadic, staying in one place for longer periods during the year, thanks to the stability afforded by sustenance farming.

Finally, during the most recent historical era of Native American inhabitation of this part of Ohio, the Whittlesey people cultivated the land, growing corn, beans, and squash while also foraging for wild edible plants. These people lived in villages of up to 150 and erected defensive forts, as warfare did occur. They developed the bow and arrow, as well as continuing to rely on older weapons and hunting tools like the atlatl.

The Whittlesey people had already mostly abandoned this place by the year 1650, a hundred years before European settlers arrived. Archeologists surmise they were displaced in part because of tensions caused by the beaver fur trade. This part of Ohio is also considered the historic land of Erie, Kaskaskia, and Mississauga peoples, according to Native Land.

Whenever we explore a preserved landscape, or even a developed city, in America, we are walking on ground that has a long human history — one that is often hidden to contemporary visitors. Learning more about the ancient inhabitants who cultivated, cared for, and stewarded this land long before us is an important step toward paying respect to the land in the present day, but it’s equally important that we learn to become good land stewards ourselves.

Keeping these lands, and all of the beautiful countryside we’re so lucky to live in and walk through as Americans, in good shape for future generations isn’t hard. Leave No Trace has some excellent and easy-to-follow principles for starters, including packing out all the garbage you pack in and also ensuring you minimize camping, hiking, and campfire impacts.

In any case, we thank you for taking a few minutes to learn more about the longstanding legacy of Cuyahoga Valley National Park, and encourage you to continue that education by reaching out to park rangers and others who have more information about the many, many Native Americans who called this place home for so many centuries before us.