From the stunning stalactites and stalagmites that characterize this hidden underground wonderland to the flowering cacti, rocky canyons, and gigantic blue skies above, Carlsbad Caverns National Park is not one to miss — even if you don’t consider yourself a spelunker.

And once you arrive at this unique desert landscape and descend into its depths, you’ll learn that the place has an even more fantastic, and quite honestly, unbelievable history: this sea of sand used to be an ocean of water. The apparition of underwater fossils in geological and archaeological studies here reveals that this place was once a vast, if shallow, inland sea, populated with a wide diversity of aquatic life.

And that’s not all of the important hidden history of this fascinating place. The land that is known, in the present-day parlance, as Carlsbad Caverns National Park has been inhabited by human beings for more than 12,000 years, starting with nomadic tribes of Native Americans that roamed at the end of the last ice age. 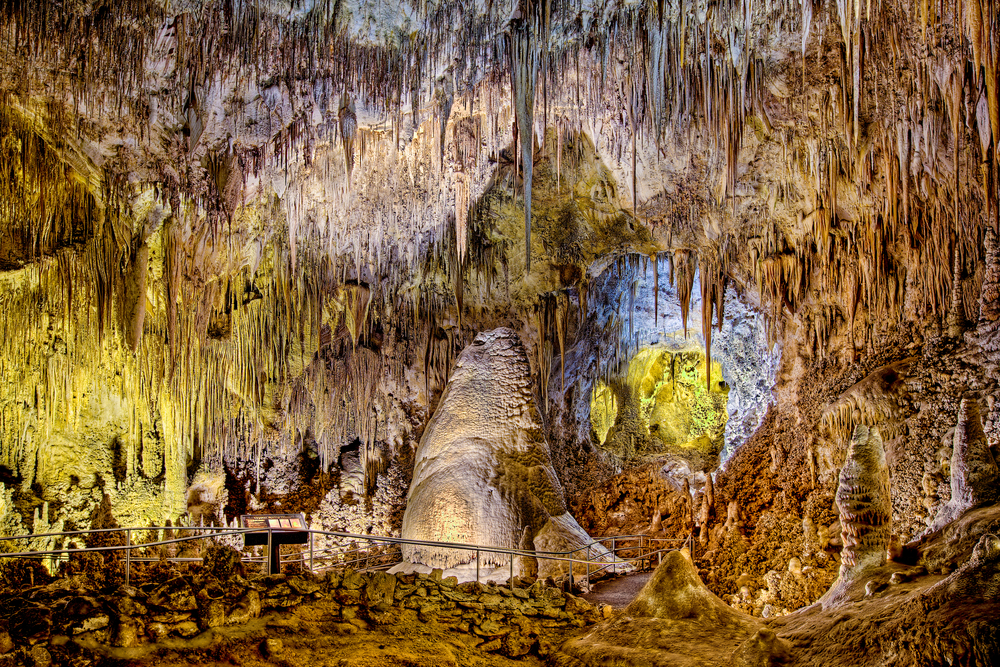 Like present-day visitors, Native Americans have explored this landscape both above and below the earth’s surface. Evidence of Indigenous peoples begins above-ground, in the hills and valleys of the Guadalupe Mountains, where ancient peoples cooked and inscribed images on rock walls. Their cooking rings and pictographs have been found within the present-day boundaries of the park, and some are even still visible.

As time marched on, different groups of Native Americans migrated into and out of this region, many of whom learned about and revered these ancient caves (which had already been transformed from an underwater landscape into the limestone masterpiece you see today). The Mescalero Apache used a word meaning home of the bat to refer to these caves, while Zuni Pueblo people called it bat cave. There isn’t evidence that these people, or any other Indigenous folks, went deep into the cave’s recesses, but mescal cooking pits and cave paintings are visible around the entrance to the caverns if you look carefully. This natural fortress has served as shelter, respite, and a place of fascination to human beings for a very, very long time.

Whenever you visit one of America’s national parks — or really any of its cities or wildernesses — you’re standing on lands that have a history long before the one detailed in most Eurocentric history books we were taught from as children. Reading up on the Indigenous history of a given place is one important first step toward understanding the overall context of your place there in time. You can also check in with websites like Native Land, which let you know whose historic, ancestral lands you’re standing on.

Additionally, we encourage all campers and national park explorers to engage in Leave No Trace practices, which help preserve these fascinating, historic landscapes for future generations. While Carlsbad Caverns is highly developed, with guide rails and a paved path through the parts of the cave open to the public, you can still ensure that you pack out any trash you may pack into the cave (or its vast above-ground landscape), and camp only at designated campsites so as to avoid putting additional stress on the land and its flora and fauna.

Enjoy you trip to one of America’s most fascinating and baffling natural wonders!