Not every desert landscape is lucky enough to boast both endless red rock geological formations over a vast and desolate-looking sea of sand and vibrant, green, fruit-bearing orchards. But these are just two of the many charms of Capitol Reef National Park, which is situated on a unique wrinkle in the earth’s crust known as the Waterpocket Fold.

More than a million visitors flock to Capitol Reef each year to see for themselves the exposed history in those layers of rock and sand, or to traipse through the Fruita orchards and pluck themselves ripe apples, apricots, cherries, peaches, pears and plums.

But this one-of-a-kind landscape has sustained human life since long before European settlers knew about it. From the ancient Paleo-Indians who roamed here some 12,000 years ago to the more recent Ute and Southern Paiute peoples who were displaced from it, the land we now know as Capitol Reef has  much deeper and richer history than the average visitor knows. 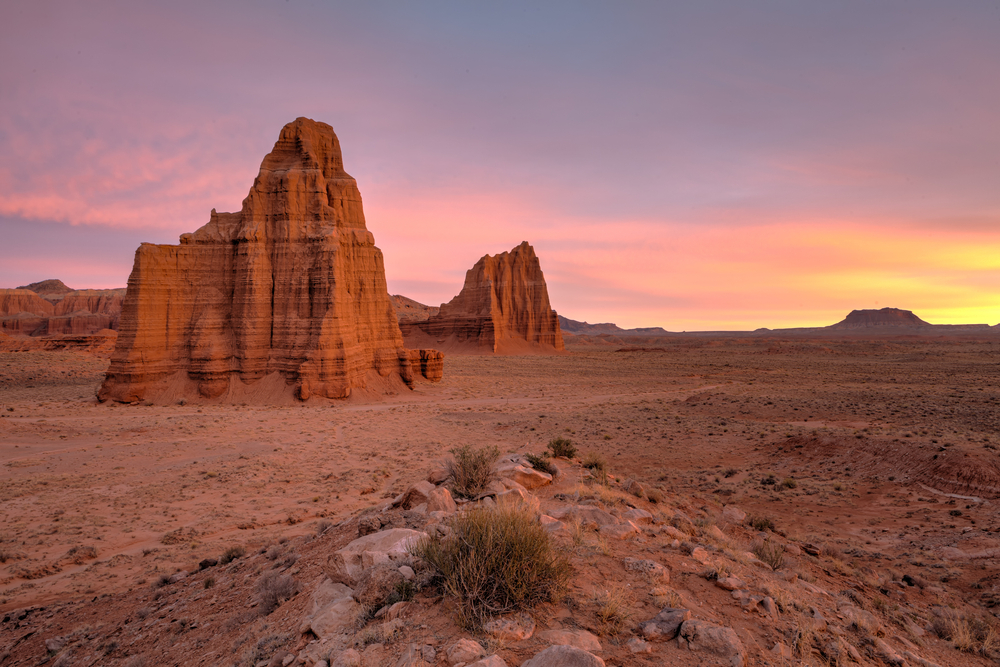 More than 10,000 years ago, the world was clasped in the grasp of the last ice age — which meant that the Bering Land Bridge connected North America to the large expanse of Europe and Asia. Ancient hunter-gatherers known as Paleo-Indians crossed that bridge and became the very first people to inhabit this continent. Archaeological evidence shows that some of them made their way to the southwest, where they dwelled in rock shelters and caves while following the megafauna, like mastodons, that sustained them. No artifacts of these peoples have been found in the Waterpocket Fold yet, but archeologists do suspect that these peoples migrated through these lands.

Over the course of time, the planet warmed, and ancient peoples had to evolve the way they interacted with and nourished themselves on the Earth. From approximately the year 6000 BCE to the year 400 CE, Desert Archaic Indians subsisted on smaller mammals (as the megafauna had died off due to climate change), also relying on plants to make food, clothing, and other necessary life items. These people are also known to have made stone tools such as the metate and mano — much like a mortar and pestle, used to process food items down into flour and paste when necessary. Archaic-era pictographs have been found in Horseshoe Cave east of Capitol Reef National Park.

Then, approximately 2,000 years ago, Fremont and Ancestral Pueblo peoples began to migrate to this area, where they developed the first human agricultural practices, allowing them to live more settled lives with complex social structures and rituals. The Fremont people are named after the Fremont River, which flows through Capitol Reef National Park, and were also spread throughout other parts of the desert southwest and as far north as what is now Idaho.

By supplementing the smaller game they hunted with both domesticated crops — corn, beans, and squash — as well as wild edible plants, like pine nuts, these peoples were able to survive in Utah and the surrounding areas for more than 1,000 years. Of course, as European settlers infiltrated the landscape, they were displaced, losing their ancestral homelands.

Wherever we go in the United States — and many other parts of the world — we are usually standing on land that was first stewarded by people long before us. Learning more about these cultures, by reading write-ups like this one and those on the NPS website, is a good start toward a fuller, more contextualized experience of the park.

Additionally, you can always check whose ancestral land you’re standing on by heading to Native Land and plugging the nearest local city into the search bar.

Finally, we encourage campers to participate in the ongoing stewardship of the land by treading lightly during their visits, following Leave No Trace principles and making sure to leave everything they see exactly as they found it. In this way, future generations will also be able to enjoy the bountiful gifts we’re granted simply by being human beings on earth.