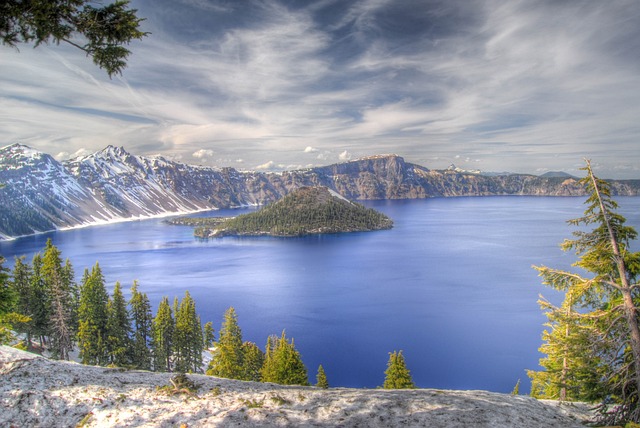 Choices, choices — there are so many beautiful and entertaining potential vacation destinations for you and your family to consider each year. Plus, the greater the number of family members or friends who are included, the more difficult it is for everyone to agree upon one place. Consider the spectacular Crater Lake National Park in Oregon.

Established by President Theodore Roosevelt in 1902, it has enjoyed an astounding increase in visitors each year since its inception. There are many reasons for this growth — including the following — the primary cause, however, is likely its absolute beauty. Enjoy these inspiring images.

Few visitors forget their first glimpse of Crater Lake National Park in southern Oregon. With wildflowers, various firs, pines, and hemlock, the 33-mile “Rim Drive” provides a great vantage point to view much of the park.

The park’s wildlife includes bobcats, black bears, deer, eagles, hawks, and marmots, as well as salmon and trout. Of course, the star of the show is the lovely Crater Lake itself.

One in a chain of volcanoes that includes Mount St. Helens, the dormant Mount Mazama is the home of Crater Lake.

The twenty-one square miles of pristine blue water surrounded by 2,000-feet high cliffs is fondly referred to as the “Gem of the Cascades.” One of the popular features, Wizard Island, juts from the surface of the deepest lake in the U.S.

Although Scientists still don’t entirely understand Crater Lake, there are a few things they do know. In 5700 B.C., nearly 8000 years ago, Mount Mazama erupted spewing volcanic ash for miles. It emitted such a huge amount of ash and pumice that it collapsed into itself. This created a smoldering caldera.

Over time, snowmelt and rain filled the caldera. This created the more than 1,900 feet deep Crater Lake.

Adding to the lake’s mystery, there are a few myths involved in its inception. The indigenous Klamath tribe, who claims to have witnessed the collapse of the volcano, orally passed down their own origin story. It involved a battle between the sky god and the god of the underworld. They also propose that the local bluebird was gray before the inky waters turned it blue.

Yet another legend describes the skills of an enormous 30-foot Hemlock stump—named the “Old Man”—that is over 100 years old. It is believed that this stump has chosen to travel the waters on its own. When efforts were made to remove it from the Lake, an enormous storm erupted. When, the “Old Man” was released back to his resting place in the lake, the storm subsided. These are just a few of the stories that surround Crater Lake.

The fabulous Pumice Desert was created by the pumice and ash that spewed from Mazama when it erupted.

After thousands of years, due to the poor quality of the quickly draining soil, there are very few plants in this area.

Tall pinnacles and spires were created when pumice and hot ash landed near the volcano. This created nearly 300-foot thick deposits. As hot gas emerged, it cemented the pumice and ash together in channels.

Over time, erosion removed much of the loose pumice and ash revealing the pinnacles.

If you are looking for a beautiful trail that is fairly easy to navigate, this is where to start. It begins near the park’s headquarters and is about 0.5-mile long.

It loops around the Castle Crest Wildflower Garden, which is a large series of meadows full of wildflowers. The view here is spectacular.

A moderately challenging 1.7-mile hike to Garfield Summit, this trailhead begins east of the popular Crater Lake Lodge. It climbs about 1,000 feet overall.

There are several picturesque spots on the trail. These include viewpoints of Wizard Island, Phantom Ship Island, and Dutton Cliff. The evening is a popular time to take on the Garfield Creek Trail.

Featured in the 2014 film starring Reese Witherspoon, entitled “Wild,” the Pacific Crest Trail passes through this park, as well.

Although beautiful—and quite a feat—the 2,650-mile long trail is not for the weak of heart. This hiking and equestrian trail touches both the Canadian and Mexican borders.

With some of the cleanest air around, the Crater Lake National Park offers a great place for camping. There are two managed campgrounds with amenities for RVers and tent campers that include food lockers to avoid black bear problems. Additionally, there are five backwoods campgrounds. These, however, require a permit for everyone other than those passing through on the Pacific Crest Trail.

Along with the hiking trails, there are many other things to do including boating, unlicensed fishing, and swimming.

11. Getting There Is Half the Fun

While that may be a slight exaggeration, the roads leading up to the park are glorious.

Depending on which direction you are coming from, you will pass other lovely lakes and abundant views of the mountains. Plan ahead, however, roads do close occasionally due to weather or fire hazards.

Although there is plenty to do there, the spectacular scenery is likely the biggest draw. Please share with any friends and family who are considering their vacation options, or just those who love inspiring scenery.

Go for the weekend, plan to vacation there, or pass through on the Pacific Crest Trail. Whichever you do, you are unlikely to be disappointed.

Oregon is an absolutely amazing place. It is home to…

The next one tank trip in our series is from…