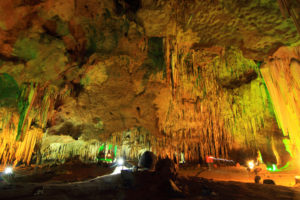 Hills, valleys, and wooded walks through stunning forest views; beautiful beachsides just calling for you to lay out your towel and slather on the sunscreen. And let’s not forget those endless fields of amber waves of grain or purple mountain majesties from the songs.

No doubt about it — there’s no shortage of natural beauty to explore in this country of ours. And there’s no better way to see and do it all than from the comfort of your motorhome or travel trailer.

RV camping is as fun as it is flexible, and it can be surprisingly affordable, too — especially if you sign up for discount camping clubs like Passport America, which takes 50% right off the top of your camping accommodation fees every single time. The only real problem, if you can call it that, is figuring out where in the world to go first; with the entirety of the U.S. highway system at your disposal, it can be downright difficult to decide.

But if you’re looking for something a little different on your next vacation, why not focus on what’s underground instead of on top of it?

Here’s some travel inspo and information for those brave and wild enough to take on a cave adventure. (Psst: They’re not all that scary!)

Before we talk about some of the best caves and caverns to put on your travel bucket list, let’s learn some facts about caves that’ll make you realize why they’re so worth your visit in the first place.

For instance, did you know there are actually many different types of caves and various different cave rock formations inside them?

In the most basic sense, a cave is any hollow place in the ground, but the term is generally used to talk about rocky openings large enough for a human to enter. Caves can also be found underwater, particularly in systems of springs such as in central Florida.

How Caves are Formed

Although caves can be formed in many different ways, the most common type is called a “solutional cave,” according to the National Caves Association. These caves are formed when soluble rock is eaten into by some solution, resulting in a large hollow in the rock.

“Solutional caves are the most frequently occurring caves and such caves form in rock that is soluble, such as limestone, but can also form in other rocks, including chalk, dolomite, marble, salt, and gypsum,” the site explains. “Rock is dissolved by natural acid in groundwater that seeps through bedding-planes, faults, joints and so on. Over geological epochs cracks expand to become caves and cave systems.”

How Caverns are Formed

Sounds good, you may be thinking… but what’s the difference between caves and caverns?

A cavern is actually a specific type of solutional cave, and its unique makeup means it has the ability to spawn speleothems, the eerie-looking cave formations you may be familiar with. Different types of speleothems include stalactites and stalagmites, as well as less familiar formations like flowstones and cave crystals.

Want to learn even more about caves and caverns? Check out the following books, available affordably on Amazon.

No matter what corner of the map you call home, there’s a cave adventure to be had in your area. Our country is rich with different kinds of underground caves to explore and discover — and don’t worry, they don’t require a pickaxe!

Here are some famous caves you can visit in your camper, which allow for an easy walking descent and surreal subterranean tour the whole family will remember for years to come. 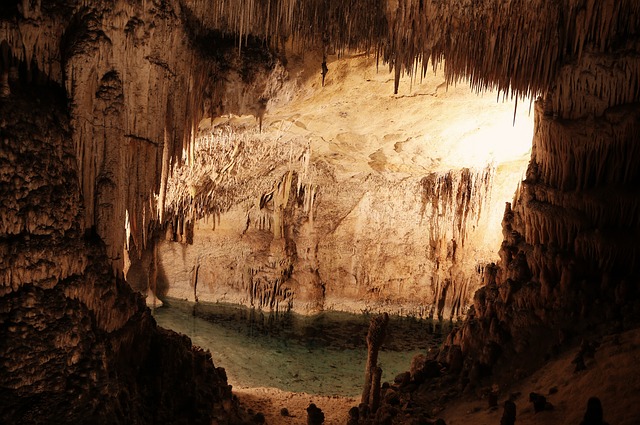 Perhaps the most famous cave in America, Carlsbad Caverns is a can’t-miss stop on any tour of the great national parks of the west.

Although you couldn’t tell from the plain-Jane surface, this corner of the Chihuahuan Desert is home to a vast system of more than 119 caves — and you can easily descend into the largest portions either on foot or by elevator. (Psst: Don’t forget to have a ranger stamp your National Parks Passport while you’re there!)

Although the west might have a higher concentration of national parks and caves, the east coast has its own mysterious depths to explore — and the right coast is no slouch. In fact, this Kentucky cave system is the longest one discovered in the world so far, with more than 400 miles explored (and still more left uncharted)!

South Dakota is already high on many RVers’ lists, and for good reason. The state is home to Mt. Rushmore and the Badlands.

But while you’re there, don’t miss out on this stunning cave system nestled in Custer County. According to the National Park Service, it’s “named for barometric winds at its entrance,” and is “home to boxwork, a unique formation rarely found elsewhere.”

A cave is one thing. But a cave with a waterfall inside it? I mean, come on. That’s not even fair.

And yet, you can find just that at Ruby Falls, conveniently located only a few miles outside of Chattanooga, Tennessee. Along with the once-in-a-lifetime view, the park also offers zipline rides and other exciting topside activities.

We hope this post has inspired you to take on some colossal cave adventures of your own. After all, with the flexibility and convenience of RV camping, it’s as easy as driving yourself to the mouth of the cave and heading down into its depths — thanks, of course, to the interpretive facilities constructed and maintained by our National Park Service.

Exploring a cave is a surefire way to renew your sense of wonder and awe at the beauty and power of nature, and to feel small in the best way possible. It’s like anything else in life: you can always benefit from a change in perspective. What better way than to venture underground?