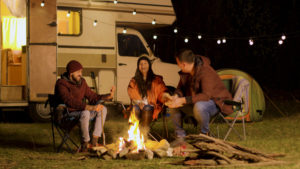 No matter how much you love camping, either in a tent or RV, you’ve probably run into a few problems along the way. Sometimes, things just don’t go right regardless of how well you’ve planned your adventure. Even when they do go right, a road trip can involve a lot of downtime while traveling (these stretches of driving can be even more restless if you have kids). A little RV humor can go a long way toward making the trip into an adventure instead of a trial. Here are a few funny RV jokes, RV puns, and funny camping jokes that are sure to make you (or your kids) laugh. There are also some camping one liners you can drop on unsuspecting folks. Use these trailer park jokes the next time you want to get a good laugh.

The teacher looked at him and asked, “Johnny, where do you get seven from?” And Johnny told her, “Because I already own a tent!”

Next time you’re on a road trip in your RV or heading to an awesome spot to pitch your tent, don’t forget to use a little humor to lighten the mood. By using one of these funny camp jokes, you’ll make the dull times go by faster and maybe even spread some cheer. And when everything is going great, a good camping joke will make things even better. You can even find some funny RV images to go with these jokes and hang them on your vehicle’s door. It’s always best to personalize RV funny jokes — this will make them more relatable and help your delivery. You can make a few small changes in these and turn them into mobile home jokes. Whatever you do, just keep on laughing. A funny RV trip is a great RV trip.